Read A Field Guide to Getting Lost Online

A Field Guide to Getting Lost 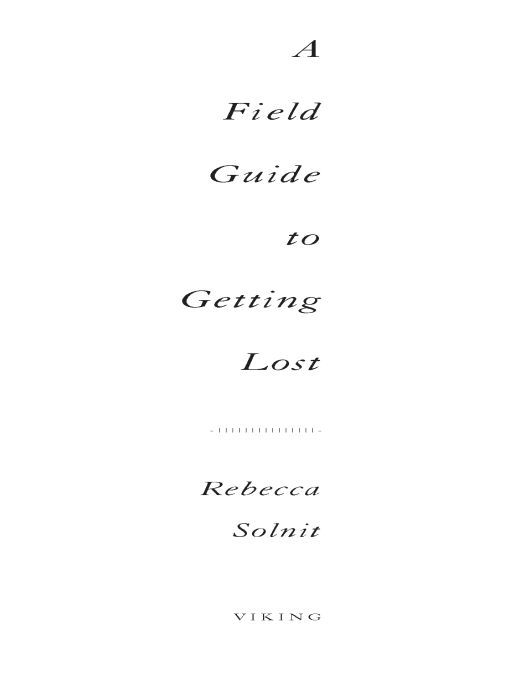 Table of Contents
Title Page
Copyright Page
Open Door
The Blue of Distance
Daisy Chains
The Blue of Distance
Abandon
The Blue of Distance
Two Arrowheads
The Blue of Distance
One-Story House
Sources
ALSO BY REBECCA SOLNIT
Secret Exhibition
Six California Artists of the Cold War Era
Savage Dreams
A Journey into the Landscape Wars of the American West
A Book of Migrations
Some Passages in Ireland
Wanderlust
A History of Walking
Hollow City
The Siege of San Francisco and the Crisis of American Urbanism
As Eve Said to the Serpent
On Landscape, Gender, and Art
River of Shadows
Eadweard Muybridge and the Technological Wild West
Hope in the Dark
Untold Histories, Wild Possibilities

Without limiting the rights under copyright reserved above, no part of this book may be reproduced, stored in or introduced into a retrieval system, or transmitted, in any form or by any means (electronic, mechanical, photocopying, recording or otherwise), without the prior written permission of both the copyright owner and the above publisher of this book.
The scanning, uploading, and distribution of this book via the Internet or via any other means without the permission of the publisher is illegal and punishable by law. Please purchase only authorized electronic editions and do not participate in or encourage electronic piracy of copyrightable materials. Your support of the author’s rights is appreciated.