Read A Match Made on Madison (The Matchmaker Chronicles) Online

A Match Made on Madison (The Matchmaker Chronicles) 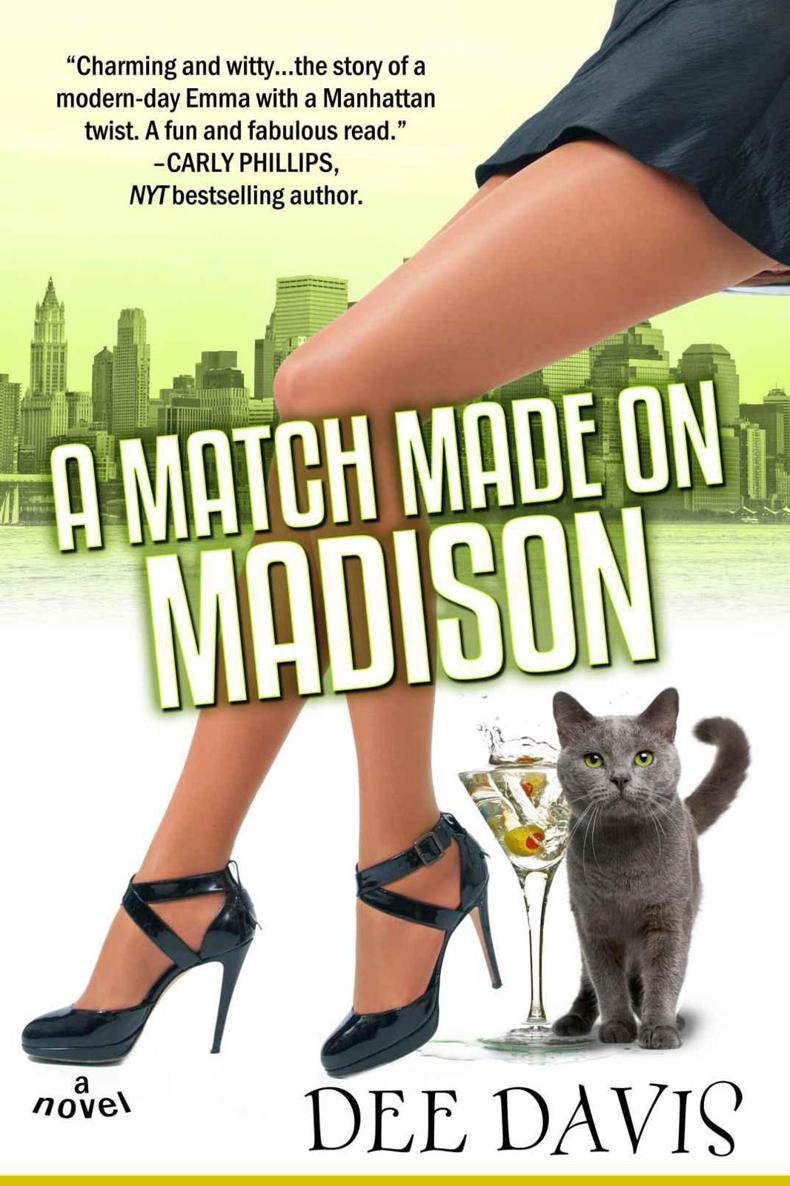 Praise for A Match Made on Madison:

“Davis not only takes readers on an enjoyable adventure as we root for Vanessa but also conducts a tour of the other sexy and entertaining main character: Manhattan.
— Booklist

“
A
Match Made on Madison
has all the classic ingredients. It’s humorous (think Wendy French), stylish (think Lauren Weisberger), has supportive gay friends (think Fielding, Keyes, Kinsella, Maxted) and in the end, the girl gets her man (think of all of the above)..”  —Fenn Focus

A Match Made on Madison
is a work of fiction.  Names, characters, places, and incidents are the products of the author’s imagination or are used fictitiously.  Any resemblance to actual events, locales, or persons, living or dead, is entirely coincidental

Originally published as a mass market paperback in the United States by St. Martin's Press.

No part of this book may be reproduced or transmitted in any form or by any electronic or mechanical means, including photocopying, recording or by any information storage and retrieval system, without the written permission of the publisher, except where permitted by law.

This ebook is licensed for your personal enjoyment only. This ebook may not be re-sold or given away to other people. If you’re reading this book and did not purchase it, or it was not purchased for your use only, then please delete it and purchase your own copy. Thank you for respecting the hard work of this author.

This is a republication in ebook format of an earlier work. Every effort has been made to reproduce the original as accurately as possible. If you find an error, please let us know
[email protected]

Sneak Peek at Setup in SoHo

Check out these books by Dee Davis

Hell with the Ladies  (Marcus)

the most amazing place on the planet

Although writers tend to spend most of their time in imaginary worlds, there’s no way a book can be created in a vacuum. And to that end, I’d like to thank the folks who helped me with
Match
— particularly those who so generously allowed me to quote from their Web sites.

My sincere thanks goes to: Sharon Thompson and the Carlyle Hotel; Michael Coy; Jeff Apfel, and citysearch.com; Stephanie Wong and stylemaven.com; Jennifer Appel and the Buttercup Bake Shop; Sly Tang and hipguide.com; Melissa A. Tyson; Greg Barton, and menupages.com; Jason Maxwell and Chef &. Co.; Dena Meyer and Cooperative Communities; Chrissy Persico; Edward Fay, and the Daily News; Wayne Lorentz and glasssteelandstone.com; Heather Cross and gonyc.about.com; Mark Komblau and Zagat; Kimberly Oser and Barneys; Mary Billingsly; historichotels.org, and the Waldorf-Astoria; Ted Magen and Park Avenue Floratique; Renee Kibbler and cityguide.aol.com; imdb.com; and Alain Gayot and gayot.com. I’d also like to thank Charlie Suisman and manhattanusersguide.com; and Melanie Thernstrom and
The NewYork Times
for the article that inspired it all.

In addition I’d like to thank Lexie Oberwetter, Julie Kenner, and Kathleen O’Reilly—I sincerely couldn’t have done this without you. And last but certainly not least—Jennifer Weis, Stefanie Lindskog, Hilary Rubin, and the fabulous Kimberly Whalen!

At the end of the day, marriage is a merger. An agreement by two parties to enter into a binding contract that will yield dividends for both. It’s a zero-sum game with the underlying goal of propagating the species, and the overwhelming desire for a controlled form of intimacy. It’s been that way since the beginning of time. Unfortunately, somewhere along the way we got a little sidetracked. It’s my job to get us back online.

Best remembered as the creator of the classic Madeline books for children, Ludwig Bemelmans once joked he’d like his tombstone to read: “Tell Them It Was Wonderful.” Well, wonderful it was, and still is, at Bemelmans Bar. Named in honor of the legendary artist, Bemelmans is a timeless New York watering hole that has drawn socialites, politicians, movie stars, and moguls for more than five decades.

"Another round please.” I signaled the tuxedo-clad waiter with an impervious twist of my hand, the gesture undoubtedly not nearly as regal as I supposed. But then dirty martinis will do that to you. Two is really the limit even for the most dedicated of drinkers. And we’d already had three.

But this was a celebration.

And I wasn’t paying the bill. Which was just as well.

Bemelmans is my idea of heaven when it comes to a bar. Small and intimate, with killer drinks, fiery-hot toasted edamame, and folksy art that puts one in mind of a children’s story-book, it’s absolutely perfect. But you could mortgage a Park Avenue apartment and still not have enough to pay the tab— especially on a martini bender. So better that it was Althea’s headache.

I’d save mine for tomorrow.

Althea Sevalas was my friend, mentor, and sometime rival. In truth, I’d absorbed all she had to teach me with the voracity of the young and hungry and then proceeded to go out and apply what I’d learned on my own.

Actually, I’m making it sound easier than it was. I don’t know that I’d ever have taken the leap, so to speak, if it hadn’t been for Franklin Pierpont’s tendency toward dramatic scenes. Franklin is a billionaire geek with absolutely no social skills.

Althea had taken him on in a fit of absolute pity. And when his first match ended in a somewhat less than desirable way, he’d wound up standing on a ledge outside my office window— nineteen floors up. Obviously this sort of behavior is not good for the matchmaking business, and Althea, who suffers from vertigo, tasked me with talking him down.

Suffice it to say, it was not one of my favorite assignments, but after showing half of Manhattan my Perele panties, and losing a Manolo to windowsill gymnastics, I managed to talk sense into the man.

Of course it didn’t hurt matters when it turned out that the policewoman who’d come to our rescue was not only a looker but also the heir to a computer fortune. A definite sign from on high. So when Althea insisted on taking credit for handling the whole fiasco, I saw the writing on the wall, and with a little help from the Pierpont-policewoman merger, I started my own agency.

At first there’d been understandable friction between us. After all, I’d walked away with all Althea’s tricks of the trade, so to speak. But with a little time she’d realized that Manhattan was big enough for both of us and, albeit warily, accepted me back into her circle of friends.

She wasn’t above twisting the knife a bit now and then, though. And having been invited to the wedding of the century was a coup she’d no doubt lord over me for years to come. It was a first and something I had to admit I aspired to achieve. Not that it was likely.

This one was a fluke. Matchmakers simply aren’t considered wedding guest material. Too much a reminder of things best forgotten.

Which explains the reason for celebrating. And though it wasn’t really my triumph, I didn’t have a problem swizzling Bemelmans martinis in Althea’s honor. Of course, I’d brought reinforcements—my friend Cybil Baranski.

“So I heard that even though the gown cost half a million, the bride still looked like overfed farm stock.” Cybil adjusted her Oliver Peoples frames and leaned forward, eyes sparkling in anticipation.

Cybil and I have been friends since Trinity, and believe me, her love of gossip was a well-developed art form even then. Just ask Roberta Marston, the first girl in our class to go all the way. And, of course, being Cybil, she’d found a way to capitalize on her talent for digging dirt, getting paid handsomely by the Murdochs to write a syndicated international column that’s become a glitterati must-read.

The bride in question was Susannah Barker, a long-shot latecomer in the race to secure the hand of multimillionaire Robert Walski. Of course, she had Althea on her team, which meant the odds were upped considerably despite what the rumormongers (excluding Cybil, of course) would have had one believe.

“Honey,” Althea leaned in as well, her nose almost colliding with Cybil’s. Dirty martinis are hell on depth perception. “When you’re wearing a size twelve at your wedding, there’s just not a lot a designer can do.” We all looked down at the newspaper Althea had brought. In this case the picture was beyond words.

Judged against the ordinary world, Susannah would be considered attractive, I suppose. But Manhattan is a sea of size twos. I’ve always believed that the reason restaurants open and close with such velocity here is due at least in part to the fact that while most women deign to visit restaurants out of social necessity, they very seldom actually eat anything.

Anyway, suffice it to say, Susannah holds up her end in the support of Manhattan restaurants. However, her size wasn’t the issue here. Her father’s upstate mills were. And when Walski realized the advantages of merging his assets with hers . . . well, the rest is history.

But that’s what it’s all about, isn’t it? Finding someone whose social background and financial assets are equal to or enhance yours? All this nonsense about true love and opposites attracting is ridiculous at the social strata we’re discussing. Marriage is a merger. It’s as simple as that.