Read A Pearl for Love Online

A Pearl for Love 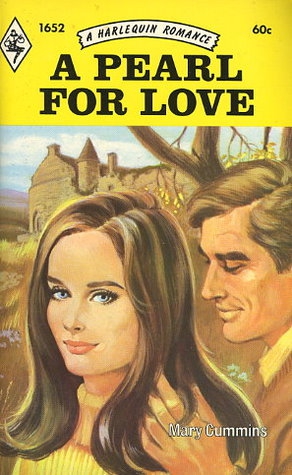 A PEARL FOR LOVE

When Catherine’s
fiancé
was tragically killed, she accepted the Sheridan’s invitation to go and stay with them and work in their family business, which was based on freshwater pearls taken from Scottish rivers.

Catherine’s own father had found a wonderful pearl before he died. It was only when she fell in love with John Sheridan that she began to wonder whether John’s interest was in her—or in that pearl.

Catherine woke suddenly, her heart pounding with fright, as a shaft of sunlight hit her eyes. Then she relaxed as she realised she was in the now familiar bedroom in the Neills
’
home.

It was a pretty bedroom, tastefully decorated, but Catherine was growing to dislike it, and to feel more and more that she was an interloper in the house, and only there because the Neills were the sort of people who would never ask her to go, however much they wanted the house to themselves again. Would it have been the same if she and Philip had been married? wondered Catherine, and closed her eyes against the sudden pain.

Catherine Lyall
...
Catherine Neill
...
Sometimes she had woken to find herself mumbling the names, and the hot tears had choked in her throat. But after two months it seemed as though her tears were all shed, and her body was healing inside as well as outside. Sometimes, too, she felt the loss of her mother even more deeply than that of Philip.

Soon, she felt, she would have to take up the threads of her life again, and face the fact that she was now alone in the world, with few people on whom she could really depend.

Yet only just over two months ago, she had been a normal, happy girl, looking forward to her marriage, with her mother travelling home from Canada for the wedding.

A quiet wedding had been planned, the guests mainly being Philip
’
s relatives, since Catherine had so few people of her own.
Mrs.
Neill had taken over quite a few of the arrangements, determined that if her son had to ma
rr
y, then she would do her best to make it a proper wedding.
Mrs.
Lyall had not been well after the death of her husband, and had gone to visit friends in Canada, hoping that the complete change would give her back her full strength and energy.

She had put off her return until the last moment, though she, too, had approved of the marriage, and Catherine had all her preparations made before she received a cable giving the time that
Mrs.
Lyall would arrive at Prestwick Airport.

‘
We can go down and pick her up in the car, darling,
’
Philip offered.

‘
Well, if her holiday in Canada has done her a lot of good, we must keep up the good work,
’
Philip said cheerfully.

They had driven to Prestwick in a happy mood.
Mrs.
Neill had insisted that
Mrs.
Lyall should stay with her for a day or two, instead of going home to the flat she shared with Catherine. Their old home had been sold after David Lyall died, and the new
flat was small in comparison, though quite big enough for two.

It had been exciting to meet her mother off the plane, and Philip strapped her carefully into the front passenger seat, while Catherine sat in the back, occasionally leaning forward to speak to both of them.

They had been nearing Perth when the accident happened. Philip had rounded a
corner
and met two vehicles side by side. Later they said it was a miracle that Catherine had escaped with a few cuts and bruises, though no one could see the long deep wounds inside at the loss of the two people she had loved most.

Catherine had been showered with sympathy because of her double loss, but it was the Neills, and especially
Mrs.
Neill, who had received most admiration. Philip had been her only son, yet she had hidden her grief, and had insisted on nursing Catherine back to health.

But now the girl felt that she had accepted enough, as she dressed to face yet another day, automatically going through the motions of putting on light makeup, and combing out her long dark hair.
Mrs.
Neill needed time, now, to think about herself. She might have come to love Catherine as a daughter in time, but at the moment she was still a young girl, no different from any young girl of her age, living in the Neills
’
home.

She would go back to the flat, thought Catherine, as she descended the stairs. She would get a job of some kind, so long as it wasn
’
t in
Mr.
Neill
’
s office of chartered surveyors and estate agents.

‘
A letter for you, Kate dear,
’
said
Mrs.
Neill, when Catherine appeared at the kitchen door.
‘
I went round to the flat and found a small bundle of circulars and, of course, your letter. I wish some of these people who go round pushing circulars through letter boxes wouldn
’
t do it if the house is empty. Seeing them sticking out of the letter box is a complete giveaway.
’

‘
You must eat, Kate. No sense in getting yourself run down.
’

What about her? wondered Catherine, looking with a sudden aching heart at the older woman
’
s thin body and pale face. She had never felt closer to feeling love and compassion for this woman.

‘
You should give up the flat and move in here with us,
’
Mrs.
Neill advised.
‘
After all, you were within a week of being our daughter.
’

‘
That week made all the difference,
’
Catherine reminded her, then her voice softened.
‘
You don
’
t really want me here. You only think you do, and please believe that I appreciate it very much. But we must both now face the fact that we haven
’
t got
Philip in our lives. He would have been a link between us and we would have grown to love each other for his sake, but I feel now that we must each go our separate ways. I ... I want to go back to the flat, and get a job, and
...
well, be independent again.
’

Mrs.
Neill was gazing at the girl, wide-eyed.

Catherine bit her lip. It was going to be difficult to make
Mrs.
Neill understand. In fact, she doubted if she could even try. Whatever she said,
Mrs.
Neill would only think her ungrateful, and might even make her
feel
ungrateful.

Mrs.
Neill rose quietly and walked out of the kitchen, and Catherine could hear her going slowly upstairs. She turned to the small bundle of circulars, and the letter in front of her, and turned it over before opening the thick, expensive envelope, then her eyes cleared when she saw that it was signed by Lucille Sheridan. The wedding gift which she had received from the Sheridans had been a beautiful carriage clock. It had been accompanied by a small dainty note of congratulations.
Mrs.
Neill had returned the gifts, and now Lucille was no doubt expressing sympathy. She had been her mother
’
s best friend, and her godmother, but that responsibility had rather slid over the years, except for a pretty pendant for her twenty-first birthday, and the clock as a wedding gift.

Lucille had married James Sheridan, and Alison Lyall had been her bridesmaid. Their son, John, was four years older than Catherine, and Elizabeth was nearer her own age. Catherine knew that the families had rather lost contact with one another over the years, except for a card at Christmas. Yet the Sheridans had often fascinated her, and secretly she would like to have known them a little better.

‘
They became very successful,
’
Alison told her daughter, rather ruefully.

‘
Fishing for freshwater pearls may sound exciting, and can be very successful,
’
Alison told her,
‘
but I suppose your father is more successful in that he loves what he is doing and is happy doing it, but financially it hasn
’
t been particularly rewarding.
’

Catherine hadn
’
t really understood till her father died, and their home had to be sold to give them a small income. Now she realised that the large jewellery firm of Sheridan and Rodgers, whose beautiful shop was one of the most attractive in Newcastle, was a far cry from
Mrs.
Lyall and her
only daughter, earning a tiny income from making small pieces of fashion jewellery at home.

Catherine pursed her lips as she drew out her letter, and began to read. What could
Mrs.
Sheridan have to say to her, since condolences, she now remembered, had already been sent?

Carefully Catherine read
’
the few preliminaries, then she was reading her letter rather more slowly.

‘
I know that you won
’
t have anyone left of your own, my dear,
’
wrote
Mrs.
Sheridan,
‘
because I remember from our schooldays that Alison only had her parents, who are now both dead, and that David, your father, was already on his own when they married.

‘
It
’
s sad for a young girl like you to have no one, so we would like you to come to us. John and Elizabeth both work in the shop with James, and if you would like a job, there
’
s always plenty to do there. On the other hand, Balgower is a big house, and although
Mrs.
Bannon is a treasure, we would welcome another pair of hands.

‘
If you would like to come, James hopes to be in Edinburgh on the sixteenth, and he could come on to Perth and pick you up. If you are still unable to travel, we can make alternative arrangements at a later date. James saw your father just before his death, and he feels David would wish him to sort out any worries you may have, business or private. He can attend to the letting of your flat, and the storage of your furniture, such as you wish to keep
...’

Catherine read on, sometimes going back to read parts of the letter twice over. It was a generous offer, kindly made, and her godmother sounded as though she was very considerate. Yet wouldn
’
t she be giving up her freedom if she went to live with the Sheridans? wondered Catherine, then felt a strong distaste for herself. Was she beginning to be suspicious of everyone?
Mrs.
Neill had been kindness itself to her, yet she felt unable to repay her with genuine love. It was as though the accident had robbed her of all feelings.

Now here was her godmother also offering her a home, and a place in family life, and all she could think of was this odd feeling of being absorbed into something against her will.

What was the alternative? wondered Catherine tiredly. She could get a job and stay on with the Neills for a few more months, being accepted because of Philip, or she could go home to the flat, and struggle to pay the bills, living an independent life but paying for her independence with loneliness.

Catherine leaned her elbows on the kitchen table and rested her chin in her hands. The letter was rather a surprise because she had felt that the Sheridans wouldn
’
t want to be bothered with her. Apparently this was quite untrue.

She looked round with a small start as
Mrs.
Neill again came quietly into the kitchen, and Catherine saw that she had been crying, and again felt she hated herself for causing her pain.