Read A Season Beyond a Kiss Online

A Season Beyond a Kiss 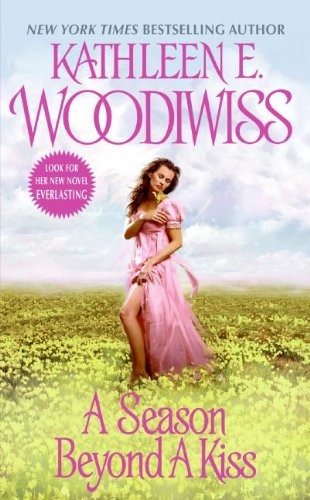 A S
EASON
B
EYOND A
K
ISS

To my oldest sister, Evelyn.
When I was a child,
she was like a second mother to me.
I love her dearly.

8
In gracious compliance with the duties . . .

9
Stirring from the pleasurable arms . . .

11
There was something totally distracting . . .

21
Gustav Fridrich strode down the street,

Other Books by Kathleen E. Woodiwiss

R
ELUCTANTLY
R
AELYNN
B
IRMINGHAM ROUSED
from slumber and lifted an eyelid to peer menacingly toward the open French doors through which drifted a distant, repetitive pounding. The sun had barely weaned itself from its earthly breast, yet a clammy warmth, augmented by a brief downpour during the night, had already stolen into her second-story bedroom. In spite of the portent of unbearable heat and humidity, Raelynn considered her chances of getting a few more moments of sleep . . .
if
she could bestir herself from the chamber’s stately four-poster long enough to close the portals. Through most of the hours of darkness just past, she had tossed in restless frustration upon her lonely bed, tormented by sensual longings her handsome husband had awakened within her, cravings that were as yet unappeased after almost two weeks of marriage. If not for the untimely intrusion of a predacious blackguard, who, with his hired rabble, forced his way into the plantation house on her wedding night, and the barrier she had personally set between her bridegroom and herself a day later after hearing a young wench accuse him of siring her unborn child, Raelynn had no doubt that she would have now been sharing not only her husband’s bed but all the pleasures to be found in matrimony. Truly, in this case, ignorance might have led to bliss if not for a girl named Nell.

The idea of remaining ensconced in bed didn’t seem nearly so appealing when Raelynn realized she had been perspiring enough to have dampened her batiste nightgown. It clung to her with maddening persistence until she was driven to pluck the garment away from her bosom and fan herself with it, creating a billowing motion that forced a light current of cooling air over her moist skin. It brought instant relief, but, at best, it would last no longer than her efforts.

Her lengthy yawn bordered on a recalcitrant groan as she crawled from the bed and tottered drowsily to the washstand. There she poured water into the porcelain washbasin and cupped the liquid to her face, hoping to put her doldrums to flight. The benefits proved just as fleeting, and no less groggy, she lent her attention to brushing her teeth.

Foreseeing a lingering lethargy unless she regained some small portion of the sleep she had lost, Raelynn pondered her chances of subduing the noise to create a more restful mood. In such a quest, she wove an unsteady path to the French doors, but upon reaching the glass-paned portals, it dawned on her that if she closed them, the room would then become stifling. Her bedchamber was one of four opening out onto the veranda that stretched across the back of the house. Only Jeff’s larger chambers next door and the bedroom at the opposite end of the structure had combinations of windows and French doors. The middle two only had a double set of the latter.

When presented a choice between suffocating within the confines of a hot, stuffy room and suffering through the noisy hammering, Raelynn decided forthwith that she could tolerate the racket far better than the unbearable alternative. Far removed from England’s moderate weather, she was now ensconced in Oakley Plantation House, located in the Carolinas where she had been warned prior to her arrival that temperatures could soar to sweltering degrees in the summer, especially in the latter months of the season. It was not a place to lightly dismiss the discomfort and hazards of rising temperatures.

A disconcerted sigh escaped Raelynn as she leaned a shoulder against the jamb and swept her gaze beyond the white balustrade bordering the outer limits of the gallery. Some time after the rain, a thick haze had crept over the land. Even now, it seemed to isolate the manse in a world of its own. Wreathed by the milky vapors, a row of huge, sprawling live oaks created a vague rampart of blurred darkness across the spacious back yard, obscuring everything beyond them as they separated the main grounds from the servants’ quarters, a collection of cabins, ranging in size from small to large, that resided in the shade of other lofty trees. Raelynn had no need to probe the mists to locate the area from whence the din arose. She knew as well as anyone living on the plantation that behind the third tree a new structure was presently being erected for the black housekeeper and her small family. Less than a fortnight ago, charred ashes and blackened timbers were all that remained of Cora’s home and possessions, yet, as late as yesterday afternoon, Raelynn had seen pitched rafters rising above the new timbers that now formed the outer shell of the structure.

Making no attempt to stifle another yawn, Raelynn lifted her long, auburn tresses off her neck. In such climes her hair had proven as heavy and warm as wool, and in view of the heat yet to come, which only promised to worsen as they entered August, she could only foresee added discomfort unless she started braiding the thick mass before retiring at night.

In preceding years, when her father had been respected as a loyal subject and emissary of King George the Third of England, the name of James Barrett, Earl of Balfour, had drawn swarms of guests to her family’s London estate. For those lavish affairs her personal maid had coifed her hair with an artistic flare, the beauty of which had drawn raves from friends and guests who had lavishly praised not only the styles, but the rich color and lush texture. In gracious response she had acknowledged their compliments, lending little consideration to her maid’s talents or toils that, even on a diurnal basis, had seen the auburn tresses arranged in more sedate, yet no less charming modes.

That was
then
.
Now
Raelynn had to care for the unruly mane herself, making her fully conscious of the arduous task just keeping her hair clean and reasonably subdued in a chignon was. Merely combing out the tangles after every washing was an ordeal, one which had recently led her to consider the benefits of reducing its length by at least half, but she had refrained, not at all certain how her husband would react to such a change. Considering the formidable wall she had erected in her marriage with her refusal to yield herself to the intimacy involved in a marital union, she dared not tweak Jeffrey’s temper any more than she had possibly done already. Her sire would have had a bloody fit if she had had the audacity to do such a thing while he had still been alive, and she couldn’t say with any assurance that her husband would tolerate such a deed any better. Though in preceding weeks she had glimpsed Jeffrey’s unyielding tenacity only once, and that during his confrontation with Nell, she had nevertheless been left with the impression that there were definite limits to what Jeffrey Birmingham would tolerate. As yet, she had not dared test that extent herself, certainly not after her request for separate beds, for to do so had seemed a definite pathway to folly.

Deliberately Raelynn turned her thoughts away from that sensitive subject, and in an attempt to stretch and tauten her muscles, she twisted this way and that several times before bending forward and pressing her palms flat upon the floor. Upon rising again, she arched her back as far as she could go, and then repeated the exercises.

On the voyage from England, steerage had been packed nigh to overflowing with passengers, and there had been little space to walk about in the dark, dank hole to which the less fortunate had been consigned. Any movement beyond the limited area her mother and she had been allotted had usually entailed bothering others, which they had both been reluctant to do. Her inactivity throughout the whole of those three months had left a lingering stiffness that, even now, was still noticeable immediately following her initial departure from bed. Still, Raelynn considered herself fortunate to have survived the poor conditions and the scarcity of food; her mother hadn’t.

Straightening with a gasp of surprise, Raelynn glanced back along the veranda from whence the deep, male voice had emanated and found her husband strolling leisurely toward her. Apparently he had ventured past the open French doors of her bedroom while she had still been asleep, no doubt to observe the progress of the carpenters from the far end of the portico, a favorable spot from which to view the building site. He wore no shirt or shoes, only sleek taupe trousers that accentuated the muscular trimness of his hips and waist. His short, raven hair was wet and wildly spiked, evidencing a recent washing that was further confirmed by the linen towel hanging about his bronzed neck.