A Wild and Lonely Place 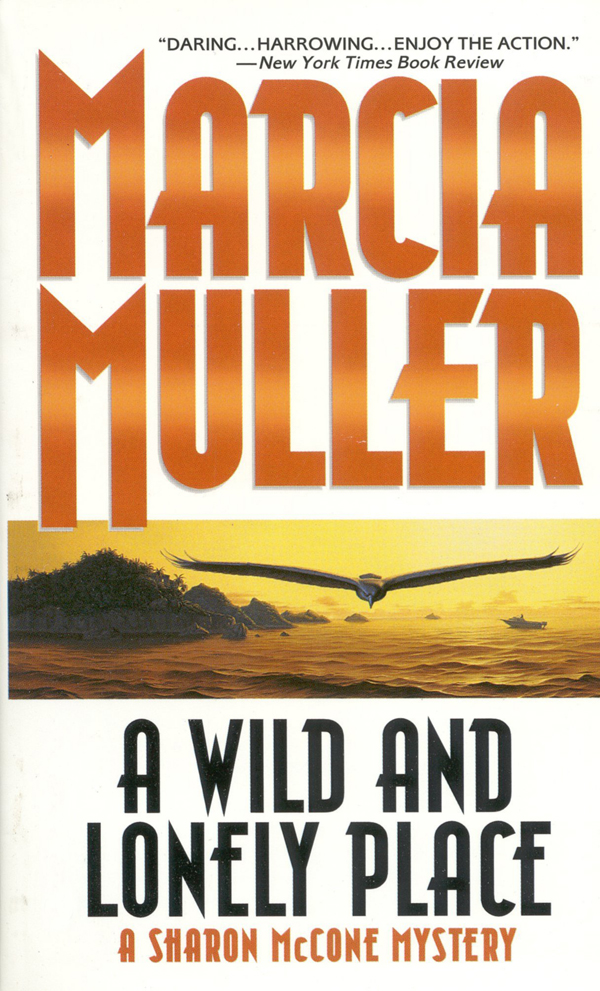 6,500 Feet Above The Tehachapi Mountains

A WILD AND LONELY PLACE

TILL THE BUTCHERS CUT HIM DOWN

WOLF IN THE SHADOWS

PENNIES ON A DEAD WOMAN’s EYES

THE SHAPE OF DREAD

THERE’s SOMETHING IN A SUNDAY

EYE OF THE STORM

THERE’s NOTHING TO BE AFRAID OF

LEAVE A MESSAGE FOR WILLIE

GAMES TO KEEP THE DARK AWAY

ASK THE CARDS A QUESTION

EDWIN OF THE IRON SHOES

For Molly Friedrich
with many thanks

And to Bill, without whom…

The vast arid waste of the Mojave was behind us now, but the deathlike loneliness of the tiny airfield and the shroud of white
smog drifting from the chemical plants at Trona had left nightmare traces in my mind. Below sprawled the Tehachapis, their
wrinkled, jagged peaks thrusting aggressively. They seemed to telegraph a warning: we can claim you.

I pulled my gaze from them before my imagination could cloud my judgment, looked instead at the last ridgeline separating
us from the Central Valley and an easy flight home. Piece of cake, as Hy would say. Only Hy wasn’t saying anything just now—hadn’t
for some time.

Anxiously I glanced into the Beechcraft’s rear seat, where he’d crawled after I’d awakened him with difficulty at Mirage Wells.
He was slumped against the side—unconscious again, and maybe better off, since the chills had passed and the fever raged again.
The little girl sat rigid beside him, silent as she’d been the whole grueling journey. Her dark hair was matted, her face
begrimed; her eyes had a bottomless quality that said she’d seen too much in too few years. I wished Hy were able to hug and
reassure her, but for the moment my smile and the words “Not long now” would have to do.

Well, who could blame her? After we were on the ground, I’d hug and reassure her. And get badly needed medical help for Hy.

I checked the instruments, looked back at the ridgeline. The morning sun was turning its striated brown rock to gold. Some
of my tension was draining away, but the grit of the desert was still on my skin, overlaying the clamminess of the tropics.
I made myself feel it so I wouldn’t become careless.

The impact felt like slamming into a concrete wall.

My stomach lurched and I felt a surge of panic. I scanned the instruments as the plane shuddered. The VSI showed we were descending
fast: fifteen hundred feet per minute, sixteen hundred…When I looked up the ridgeline tilted crazily, then leaped to the top
of the windscreen. All I could see was a fractured stone cliff face.

Extreme clear air turbulence here, and why the hell hadn’t Flight Service warned me? Not that I’d’ve had any choice but to
brave it.…

I glanced into the rear seat again. Hy was still unconscious; no help from that quarter. The child’s eyes were wide, her face
drained of color. Afraid I’d betray my panic if I spoke, I tried instead for a reassuring smile, but it didn’t come off.

Okay, I thought, you know what to do. You’ve watched Hy deal with downdrafts a hundred times or more. Stay calm and change
course. Get away from that ridge, turn toward lower ground.

I turned. Another draft slammed us. For a minute the Beechcraft shuddered so violently that I imagined its wings being torn
off.

Sweat coated my forehead and palms. I gripped the controls, struggling for focus.

My mind refused to function.

Oh God, not this! We’ve come too far, through too much.

This can’t be happening! I can’t die this way.

Sunlight, you idiot! Mountains facing into the sun create up-drafts. Get closer to them, not farther away.

Find an updraft, and you can use this machine as a glider. Find one, and you’ll clear that ridge.

I began to test the controls, banking toward the cliff.

I had just left Adah Joslyn’s office at the Diplo-bomber Task Force headquarters when I ran into Gage Renshaw.

As I walked toward the elevator of the decrepit Federal Building annex on Eddy Street, I spotted him turning away from the
drinking fountain and brushing at some water drops on his rumpled blue tie. There was a dark stain on the lapel of his equally
rumpled gray suit that might also have been water but could just as well be the remains of some long-past meal eaten on the
run. Gage had the ability to go for days without noticing such things, but of course he noticed me instantly. His dark eyebrows
quirked up and his mouth widened in a smile that gave him a distinctly satanic look.

“Well, Sharon McCone,” he said. “What brings you here—as if I couldn’t guess?”

“Hello, Gage.” I nodded pleasantly enough and kept walking. The conversation with Joslyn that I’d just concluded had disturbed
me, and I was in no mood to spar with an old adversary—even one whom I’d forgiven most of his transgressions.

Renshaw stepped in front of me and placed his hand over the elevator’s call buttons. “Visiting the SFPD’s representative on
the task force?”

I looked pointedly at my watch. It was only a little after one, and I had a long gap in my schedule, but I hoped Renshaw would
take the hint.

“Hear anything interesting while you were in there?” he asked.

“Only that the TV special last night brought out the usual nut cases.” I peeled his hand off the call buttons and punched
Down. The single elevator was absurdly slow; I leaned against the wall and crossed my arms, prepared to suffer Renshaw’s curiosity
until it came.

He regarded me through his dark-rimmed glasses, cool gray eyes amused. The dim light from the fixture above our heads cast
shadows on the bony planes of his face and made him look like a middle-aged Abe Lincoln. He said, “Of course, you wouldn’t
tell me if you had—heard anything interesting, I mean.”

“Of course. And if I were to ask you why you’re here, you wouldn’t tell me, either.”

“I think our motives are fairly obvious, and similar. Every investigator in town is whoring after the million-dollar reward
the feds’ve posted for information leading to the bomber.”

Now there was a false note if I’d ever heard one. Gage’s firm, Renshaw and Kessell International, specialized in corporate
security and counter-terrorism services, and a million dollars was nothing to them, compared to the handsome retainers they
collected. His very presence in San Francisco was suspect, as he worked out of RKI’s world headquarters in La Jolla.

I didn’t comment, though, just raised my guard an inch or two and waited to see where this conversation was going.

Renshaw came over and leaned against the wall next to me. His white forelock—startling in contrast to his shaggy dark mane—flopped
onto his brow; he tossed it back with a practiced twist of his head. “The figure one million does have a nice ring, Sharon.”

“Not much chance of one individual claiming it, though.”

“In my experience, an investigation like this requires teamwork.”

“Meaning you might be better off joining forces with an organization that has greater resources than yours.”

“An organization such as RKI.”

“We’ve got capabilities you’ve only dreamed of.”

“Then why on earth would you want to co-opt me?”

“Well, there is your connection with the task force. You can’t convince me that Inspector Joslyn hasn’t been feeding you information.”

She had, but Renshaw didn’t need to know that. I pushed away from the wall and punched the call button again.

“Besides,” Renshaw added, “you and I have worked well together in the past.”

I stared at him, astonished. “
Worked together?
You tried to use me to get a lead on Ripinsky—so you could kill him!”

“And you used our money to save him. Touché. Anyway”—he waved his hand dismissively—“all that’s in the past. Ripinsky’s a
partner in the firm now. He, Kessell, and I have reached an understanding. You and he are…well, whatever you are to each other.
That makes us practically family.”

“You and I are not family. We will never be family. And McCone Investigations doesn’t enter into cooperative arrangements
with firms whose practices are…incompatible with ours.”

Renshaw tried to look wounded at my thinly veiled slur upon RKI’s professional ethics, but the effort was lost on me. I’d
long before learned that he was incapable of being insulted. If anything, he took pride in his dubious transactions and extralegal
shortcuts.

“Okay,” he said after a moment, “let me make you a proposition. Come back to the shop with me, take a look at what we’re got
on these bombings. If it intrigues you, you share what you’ve got with us, and we work together. If you’re still not interested,
the subject is closed.”

The elevator finally creaked to a stop, its doors wheezing ominously as they opened. I stepped on, and Renshaw followed.

“Why such largess, Gage?”

“Don’t give me that. You must need my connection to the task force very badly. And it isn’t because, as you put it, you’re
whoring after a million-dollar reward.”

He hesitated. “Okay, it’s not. But come back to the shop anyway. What’ve you got to lose?”

“Thanks a lot.” But already he’d intrigued me. I said, “I can be there in half an hour. But remember—I don’t owe you a thing.”

As I drove to RKI’s building on Green Street between the foot of Telegraph Hill and the Embarcadero, I thought about my earlier
conversation with Adah Joslyn.

My friend was slumped behind her littered desk when I entered her office, a pencil skewered through her thick dark curls,
a scowl creasing her honey-tan face. Even on what was obviously a bad day, she managed to look elegant. Her beautifully tailored
jacket and pants had something to do with that, but I’d seen her look the same in sweats. Adah’s elegance stemmed from a combination
of inner qualities: composure, confidence, assertiveness, her way of meeting the world with a level, honest gaze.

A fifteen-year veteran of the SFPD, Joslyn had been the answer to the prayers of a former chief beset by complaints that the
composition of departmental personnel did not reflect that of the community they served. In order to get the media, the mayor,
and various citizen-watchdog groups off his back, he’d cast around for a minority figure to award with a high-visibility promotion,
and in Joslyn he found her. She was not only half African-American and half Jewish, but also a decorated, talented cop. When
she took her place on the elite Homicide detail, she quickly proved that she wasn’t there as mere political window dressing
and soon won the admiration and respect of her most serious detractors.