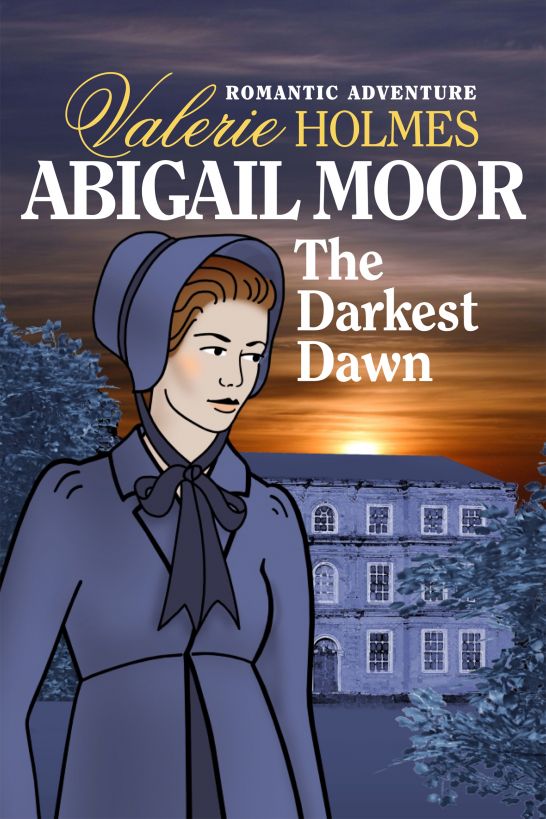 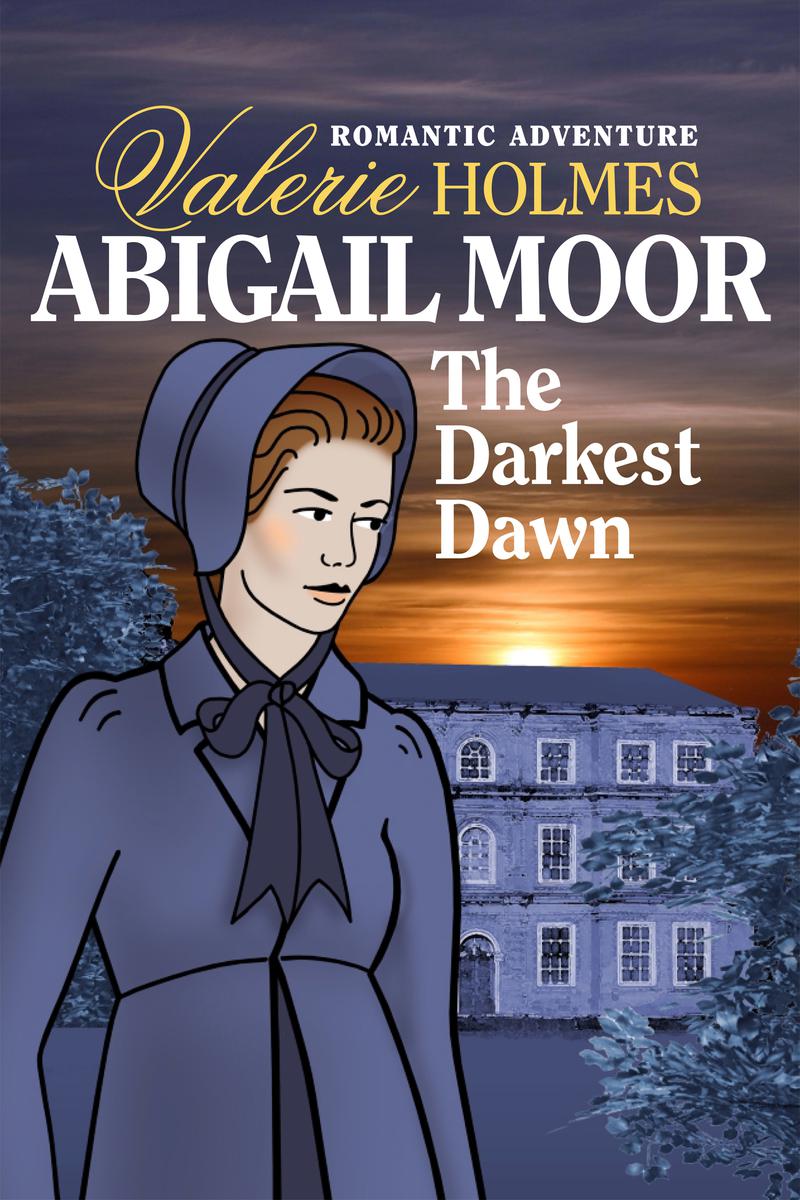 This ebook is
licensed for your personal enjoyment only. This ebook may not be
re-sold or given away to other people. If you would like to share
this book with another person, please purchase an additional copy
for each recipient. If you are reading this book and did not
purchase it, or it was not purchased for your use only, then please
return to Smashwords.com and purchase your own copy. Thank you for
respecting the hard work of this author.

Abigail Hammond has been raised as a lady by her guardian,
Lord Edmund Hammond. However, her sheltered life ends when he falls
ill. His heir, Frederick, returns to force her into a marriage of
convenience. Abigail has to flee to York with her lifelong maid,
Martha, at Lord Hammond’s insistence. Captain Rusk, an injured
rifleman, helps her and together they discover love and who she
really is.
REVIEWS

“Valerie Holmes writes warm-hearted, romantic, exciting stories in
which you will meet many delightful heroes and heroines - perfect
for quality leisure reading.”

“Valerie Holmes gives us feisty, compelling
heroines and romance shot through with adventure.”

Abigail looked the man straight in the eyes. Simpson was her
brother’s manservant and therefore should be obeying her orders.
Standing defiantly in her delicate white muslin gown, which
unfortunately served only to accentuate the flushed pink of her
embarrassed cheeks, she tried one final time to have him do her
bidding.

“I wish to see
my father. I have been kept from him ever since my brother returned
home. Why?” Abigail picked nervously at the fine embroidery on her
long sleeve. The high-waisted dress was one of her prettiest and
she knew it suited her slender figure. She hoped that the man would
be touched by her predicament and let her inside the room for a few
precious moments. Her father was ailing and her exclusion from his
presence was becoming as intolerable as it was worrying.

“I’m sorry,
Miss Hammond, but Lord Hammond is not to be disturbed. I have my
orders.” He bowed his head slightly, apologetically even, but his
vision never left hers as he stared defiantly back. He stood a head
and shoulders higher than Abigail. She found him to be intimidating
in stature, which annoyed her still further. She was his better,
and he should not be so bold with her. Abigail held her head high,
her pride dented. She had been turned away by a servant. How could
he have been given authority over her, in her own home? The
situation was simply wrong.

“Then please go
and inform Mr Frederick that I have no appetite today and shall not
be taking dinner with him tonight.” Abigail glared at him,
challenging him to defy her second command.

He glanced at
the locked bedchamber door behind him, seemingly considering this
request, and thankfully, Abigail thought, he decided it was safe to
leave his post for the few moments it would take to deliver her
message.

Abigail smiled
fleetingly as she watched him walk down the long carpeted corridor.
He looked like a peacock, she mused, dressed in the livery of a
fool. She bent down and reached behind the chair that the
manservant, Simpson, had been standing next to. Her father always
kept a spare key there in case he forgot his own. Lord Hammond was
a private man, who took care to keep his doors locked against the
prying eyes of any but his most trusted manservant.

She raised the
key to the lock, when she heard Frederick and his man talking on
the stairs. Abigail opened the door opposite and hid for a few
moments, leaving the tiniest of gaps between the door and the
surround for her to peep through.

“Go to the
kitchens now whilst I speak to Lord Hammond and next time, Simpson,
do not dare to leave your post unless ‘I’ have ordered it!” Abigail
saw the manservant bow low, his teeth seemed gritted, his eyes cast
down to the floor before he walked away. No wonder he had not given
in to her gentle appeal; he feared the power which her brother had
over him, on which his position relied. Frederick was showing a
sterner side to his nature than she had seen previously.

Frederick
walked purposefully along the corridor and entered her father’s
bedchamber. Once he was inside, she crept across the landing and
listened silently by the door.

“Father, I am
glad to see you are awake and looking somewhat better. I travelled
up from York as soon as I received the sad news that you have been
laid low by the fevers. Abigail’s letter was understandably
emotional and poorly written, but I realised that this situation
required my presence and therefore came in haste. I hope you are
not in too much pain?” Frederick’s voice was always clear. As a
senior partner in his own law firm, he was never at a loss as to
what to say. His confident manner had impressed Abigail for many
years, until he had returned to Beckton Manor earlier in the week.
Then, with Lord Hammond still ill abed, his attitude towards her
had been different, distant even. At eleven years her senior, he
had been a somewhat aloof figure whom she had looked up to, and she
loved him dearly as a brother.

Abigail could
not hear Lord Hammond’s reply. His voice was too weak and low.

“Good. Now that
I am here, you have no need to worry about a thing…”

There was a
pause, but still Abigail could not make out the words spoken by her
father.

Frederick
laughed, but it was a laugh of cold mockery rather than of warm
humour. “Dear Father, your concerns are oh so predictable. Always
Abigail, isn’t it? What of her future? I believe I have told you
many a time; the one mistake that many people make in this life is
regarding their final arrangements and yet you are no exception. If
only you had listened to my advice – but then when have you ever?
People think themselves indestructible, leaving until tomorrow what
they should have done yesterday. So, now you are reaching your time
of few tomorrows and you have left issues undone and unsaid.”

There was a
moment of relative quiet, whilst her father answered.

“No, don’t
upset yourself, sir. I have had a lifetime to adjust to it, and to
patiently prepare for such a time. Fret not, for Frederick’s
future, Father. Don’t you think on that, for it is secure, although
I do not think you have given it much thought since I chose the
power of the written word over the blow of a sword. Not quite the
hero you hoped to raise, am I? Never mind your disappointment, it
means little to me now. Success can be found away from the battle
fields. I am your son and heir and I shall claim my birthright. Do
not worry yourself about your dear Abigail. I shall see she is
suitably matched to someone who will give her all she needs. Mr
Ignatius Blackman is arriving to meet his future. Now if you’ll
excuse me, I am expecting a visitor. Your tray will be brought to
you soon.”

One word formed
on Lord Hammond’s lips, “No!”

Frederick
half-smiled and bowed low, before turning and walking away.

Abigail ran back inside the room opposite as Frederick left,
locking the door behind him.

Once he had
walked away, she slowly turned the spare key to release the ornate
handle of the door before Simpson repositioned himself outside.
Silently, she tiptoed over to where the figure of Lord Hammond lay
motionless on the bed.

Abigail’s chest
tightened as the fear grew within her that he might have already
slipped away after the harshness of Frederick’s outburst.

“I wondered how
long it would be before you found your way to me once more.” Lord
Hammond’s voice was low and hoarse but he managed to speak so that
she could make out his words. “You will have to be brave, dear
Abigail. Now Frederick is here, and my worst fears have been
confirmed, you shall have to leave. I knew he would come home soon.
I’m sorry, I...”

“Father, it is
all right now, for Frederick is here to take care of things. You
shall be well, you will...” He shook his head slowly. It appeared
to take a great deal of effort. “Father, are you..? Will you..? I
mean, Frederick will send for the best physician...” Abigail tried
to reassure the man she loved dearly that his care was in safe
hands, trying not to reveal the desperate feelings of hurt which
were festering inside her. Hearing Frederick’s cold admissions and
bitter resentment of her, and knowing her father’s health was so
fragile, she was dealing with an intensity of emotions and fears
which her sheltered life had, to date, protected her from. “I’m
sorry, I didn’t realise you had more than a chill, Father.” She
squeezed his hand gently. “I sent for Frederick because I thought
he would have brought a man of medicine with him from York. Father,
are you…?” she could not find the words to express her fears and
finish the unanswerable question which filled her head with even
more dread.

“If you are
asking me if I am very ill, then I should have to answer yes.” His
voice was no more than a whisper. He coughed and swallowed with
some difficulty. “My dearest Abigail, I shall die, as we all must,
but when, that I do not know. No one does. I am sorry to tell you
this so bluntly, but it will not be overly long now before my time
on this earth has passed by.” He sighed heavily and Abigail could
see for herself how tired he was, as if her eyes had been forced
open wide to acknowledge what they had not previously wanted to
see.

Abigail
silenced herself. She could not come to terms with either her
father’s situation or her own. Life had always been so simple.
Filling her days with organising the house and servants, occupying
her time with riding, reading, embroidery and happy hours spent in
her father’s company or visiting, occasionally, neighbours’ houses.
Now, everything precious to her was under threat.

Lord Hammond
slowly turned his head to her. “My beautiful Abigail, there is so
much I should have told you. I realise now, lying here, how blind I
have been. I thought Frederick would look after you but I have seen
him in his true light, for he has shown his bitterness to me also.
I have been blinkered by my own love for him. I have let him down
in some way. He thinks I am disappointed in him, and he bears
resentment. I should have been more open with him as I have been
with you. Forgive an old fool his folly.” He coughed and Abigail
looked to the door nervously in case Frederick’s servant, who might
have returned, should enter. “Listen, you must be strong. You must
leave us. This is no longer a place of safety for you. I cannot
oversee future events. Take your maidservant, Martha, with you, for
she knows something of where you came from, and I realise that it
is also time that you were told the truth.”

“Father, I
cannot leave you. You are ill and I have no money of my own. What
would I do and where would I go? Why should I have to? Frederick
will see me well enough.” She paused, realising after eavesdropping
on the previous conversation, there was little hope he would have
her best interests at heart. She swallowed, forced a smile upon her
lips, and tried to reassure an ailing man’s heart. “He would not
turn me out,” Abigail said as lightly as she could manage.