Adventures of a Cat-Whiskered Girl (17 page)

"It's not as easy as that," the Wolluf said. "Only members may enter, and they are really strict about it."

"But you're the Wolluf. You can do anything, right?"

"It's true I have powers on the plane we just came fromâbut here I have them and I don't. It's best not
to try to do anything fancy. To enter the temple, we'd need to get permission from Baas Kwaadwillig."

"Baas Kwaadwillig is the master of the Mystic Brotherhood. He also runs the townâcall him the mayor, or the dictator. And he is dangerous and evil."

"And very evil. It is believed he does bad things to people."

"I meant what sort of bad things."

CHAPTER 46
Neither Here nor There 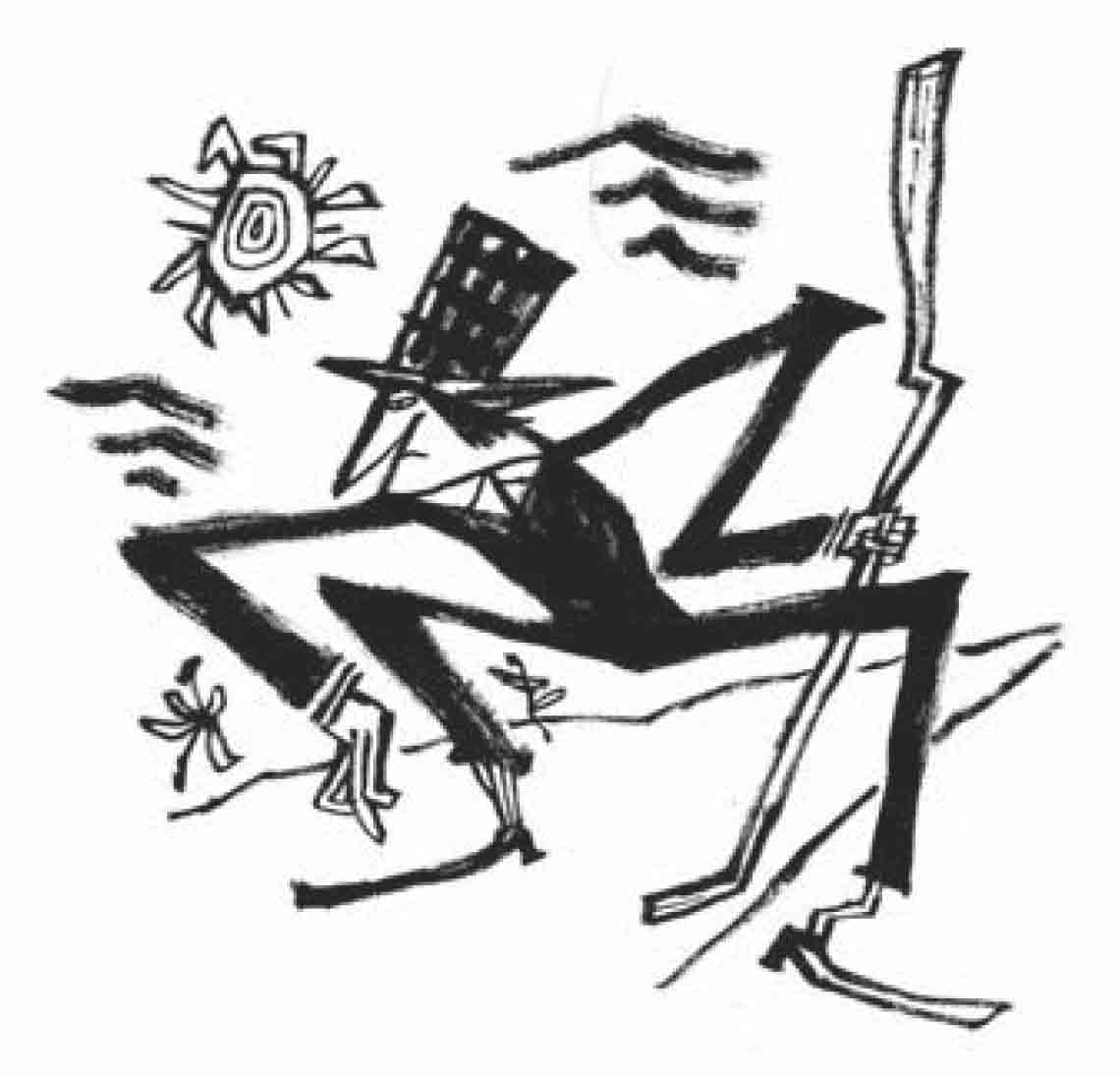 "Take a look. There he goes now," the Wolluf said.

We saw a man who was all angles. It was as though none of his knees or elbows, ankles or wrists, worked in the usual way. He was dressed all in black, with a black high hat, and he was walking like a double-jointed crab, bent over, with the aid of a crooked stick. He had pale gray skin, long, straight gray hair, a wiggly pointed nose and little dark pinpoint eyes. Baas Kwaadwillig looked over his shoulder, fixed us with a pinpoint gaze that made me think of stale shredded wheat and moldy prunes, and went into the Temple of the Mystic Brotherhood.

"What do you think of Baas Kwaadwillig?" the Wolluf asked.

"He looks as bad as can be," I said. "Are we going to ask him for permission to enter the temple?"

"Possibly not at this time," the Wolluf said. "It might be better to look around and get better acquainted with our surroundings first."

Walking around Apokeepsing, a city on an interstitial existential plane that was, and was not, identical to Poughkeepsie in some places, and not in others, was stranger and more confusing than if it had been a completely different place. We kept having the experience, over and over, of being completely comfortable and sure of where we were and then finding something unexpected and completely different. For example, imagine you are walking along a street you have walked along a hundred timesâyou know every house, every tree and bush. Then, you turn a corner you have turned a hundred times and there is a small volcano, with smoke and gasses issuing forth, and looking like it might erupt at any moment.

"Actually, the term for this is
fumarole,
although a small volcano is what it is," the Wolluf said. "Usually if there is one there are more, and often a big one, in the neighborhood, so we will watch our step."

We found ourselves on the road that would have
led to Spookhuizen and Chicken Nancy's house if we were in Poughkeepsie.

"I'd like to see if there's a Spookhuizen here," I said.

Then we met someone we knew! It was Jack! He was leading his horse.

Jack looked at us uncomprehendingly. It was obvious he didn't recognize us but assumed we knew him. He was friendly. "My mother told me to take this horse and trade it for something of value," he said.

It was also obvious that this Jack was a bit more simple-minded than the one we knew on the Poughkeepsie plane.

"Close enough. It's Jake. I am going to the farmer to trade the horse."

"Your horse, Diablo? Don't you love him? Why would you want to trade him?"

"This horse is named Duivel, and he's just a horse. I'd rather have something valuableâbesides, my mother told me to trade him. I don't know anything about a horse named Diablo. Would you like to come along?"

"We wouldn't miss it for the world," I said.

CHAPTER 47
Jake and the Bean Soup 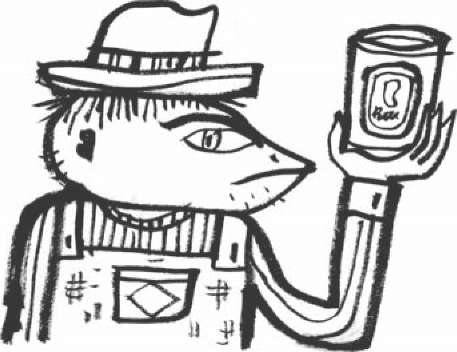 We were on a road that corresponded to the road we knew in Poughkeepsie that led to the old stone barn, and Jake was heading in that direction.

"I'm really curious to see if there's a Spookhuizen here too," Molly said.

It was to the old stone barn that Jake meant to go. It was a working farm in this version of reality. The farmer was big and fat, with a broad-brimmed hat, square-toed boots, a fringe of gray whiskers ... and scales. He was like a human, and like a lizard. He was sitting on a bench in front of the old stone barn, sharpening a scythe.

Molly and I peered at the land behind the barn. There was no Spookhuizenânothing but cultivated fields of beans or something.

"You want to swap for this horse?" Jake asked the farmer.

"It all depends, lad," the farmer said. "What did ye expect to get for horse?"

"Well, something of value, of course," Jake said. "Gold, for example."

"Eish! Not gold, that's certain," the farmer said. "He's not much, is horse. Not worth beans."

"I wouldn't trade him for beans," Jake said.

"Would thou trade horse for soup?" the farmer asked.

"What kind of soup?"

"Not if it were magic bean soup?" the farmer asked.

"This be the most magical bean soup ever was." The farmer reached into his overalls and pulled out a
can. The label had a picture of a bean on it, and the lettering read
Farmer Grey's Magic Bean Soup. Kosher.
"It be kosher," he said.

"How many cans of this kosher magic bean soup would you trade for this fine horse?" Jake asked.

"One can for one horse," the farmer said.

"It be magic," the farmer said.

Jake thought for a while. "Deal!" he said. He and the farmer spat on their palms and shook hands.

"What do I look like to you?" the farmer asked. "A magician? I'm a farmer. Ask me about crops or something, and I'll tell you. It's magic, and that's all I know about it. Now be on your way alreadyâI have to go make with the scythe." 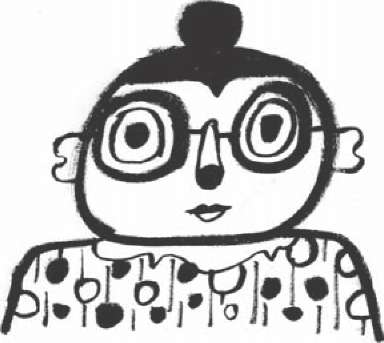 "What are you going to do with your magic bean soup?" I asked Jake.

"I will take it to my mother, of course," Jake said. "She will be pleased with me for making such a clever trade. Would you like to come along? Mommy will be happy to meet you."

"Oh, we are definitely coming along," Molly said. "I want to know how this story turns out."

The way to Jake's house was familiar. It was the same as the way to Chicken Nancy's house in the woods. Realizing where we were headed, we wondered if Chicken Nancy was Jake's mother in this semiplane. She was not. The woman who came out of the little houseâwhich looked just like it did on
the Poughkeepsie planeâwas little and round, with a round head with her hair in a round bun on top, a round nose, and little round fingers on her little round hands. She had boots on, so we couldn't see if she had little round feet and little round toes, but it was a safe assumption.

"So! You're back from trading the horse already! What did you get for him? And hello, strangers. Welcome to our little home."

"I got this can of magic bean soup, Mommy," Jake said.

"What? You ninny! You fool! Come here and bend down so I can give you a slap on the noggin!"

Jake bent over, and his mother slapped him on the head. "You're a dolt! You traded a horse like that for a can of magic bean soup?"

"It was a good trade, Mommy!" Jake said. "My friends here said it was."

"I don't know who your friends are or where they came from," Jake's mother said. "But that horse was worth two cans of magic bean soup if he was worth a single bean! The farmer saw you coming, you nitwit!" She slapped him again.

"Mommy! You're embarrassing me in front of these people!" Jake shouted.

"Of courseâwhere are my manners?" Jake's mommy said. "People I never saw before in my life, would you care to join us for some magic bean soup?"

"Only if you will share the cold fishcake sandwiches we brought with us," the Wolluf said.

"It will be a feast," Jake's mother said. "And I have leftover coffee from this morning."

The bean soup did not taste very magical. It did not even taste very beany. Jake's mother had to water it down so it would go around. It didn't seem to me that it would have been any better full strength. However, it was hot, and we were hungry. Not every meal has to be a banquet.

While we were munching and slurping, I noticed that I felt sort of giddy and woozy.

"The room is wiggling," Jake said.

"This soup is laughing at me," Jake's mother said.

A small giant had entered the room. He looked exactly like Harold, our giant from back home in regular Poughkeepsie.

"Hello, everybody," the giant said.

"This will not mean anything to you, but you look exactly like a giant we know named Harold," I said.

"Well, it means hardly anything to me, but my name is Harold, and you do know me," Mr. Boonstengel said.

"I wouldn't say I was yours, but I know what you mean, and yes, I am the giant you took the boat ride with."

"How come you are here on this interstitial existential quasi plane?" I asked.

"I live here most of the time," Harold Boonstengel said. "I have a small Christmas tree farm just up the path. What have you been doing, eating magic bean soup? You all look sort of high."

"Yes. What is it with this stuff?" Molly asked.

"Do people eat it because it makes them high?" I asked. "I find it sort of unpleasant."

"I don't know why people eat it," the giant said. "But it wears off pretty fast."

"Why did she whoop?" Molly asked me.

"Whoop!" I said. Something had poked my bottom, which surprised me, causing me to whoop.

"Whoop!" Molly said. "Something just poked my bottom. What goes on here?"

We looked down and saw an animal about the size of a large duck, and resembling a fireplug. It had a lustrous coat like a golden retriever.

"I am the Wolluf," the Wolluf said. "And if this creature gooses me, I will consider it a mark of disrespect."

"I think Sparky knows enough not to goose the Wolluf," Boonstengel said.

"Let us hope so," the Wolluf said. "Now I think we should depart."

"I was hoping you'd say that," Jake's mother said. "We have work to do around here and can't spend the day chatting with total strangers."

Five Days at Memorial: Life and Death in a Storm-Ravaged Hospital by Sheri Fink
The Cross Timbers by Edward Everett Dale
The Dragon and the Pearl by Jeannie Lin
Vampire: Desire of Blood (Desires of Blood Book 1) by Ethan Radcliff
Mama Cracks a Mask of Innocence by Nora Deloach
Dance of the Crystal by Anson, Cris
Swap Over by Margaret Pearce
On Earth as It Is in Heaven by Davide Enia
Indignation by Celinda Santillan
Sexualmente by Nuria Roca