Adventures of a Cat-Whiskered Girl (2 page) 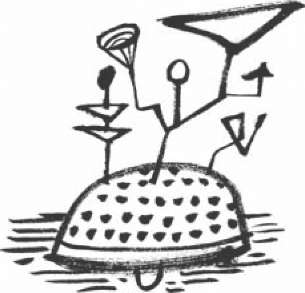 I woke up in my little room behind the shop, washed, got the big electric coffee percolator started, and got ready to open the shop. This had been my routine since I first hit town. Mr. and Mrs. Gleybner had hired me on the spot when I walked in the door, carrying my bag and my bottle of papaya juice.

"You are just the employee we have been wishing for," Mrs. Gleybner said.

Mr. and Mrs. Gleybner looked at each other. "Los Angeles, she says." They smiled and nodded knowingly.

The UFO Bookshop specializes in books about flying saucers, visitors from other planets, space travel, aliens who live among us, radio messages from space, and secret government conspiracies to conceal the truth from the people. They also have books about the abominable snowman, Bigfoot, crop circles, the Bermuda Triangle, mystery spots where gravity works backwards, secret cities underneath the surface of the earth, and chickens who can foretell the future. They didn't have any books that told about other planes of existence, but except for that it seemed they had plenty of stuff that would appeal to intelligent people.

The store also had a small selection of binoculars, special notebooks with boxes printed on the pages for noting characteristics of flying saucers you'd see, pens that had a little flashlight built in, and cards with pictures of different kinds of spaceships on one side and different kinds of space beings on the other, for quick identification. There was also the Gleybner Helmet,
which was something like a colander with wire spirals sticking out of it and a chinstrapâthis was to enhance the reception of telepathic brainwaves from the space people. Mr. Gleybner made them in the basement.

Naturally, the Gleybners had assumed I was an extraterrestrial alien because of my appearance. I tried to explain, but their minds were made up. They wanted me to work for them, paid me the same as I had gotten working at the Rolling Doughnut in Los Angeles, and threw in the room in the back for me to live in. I liked the store, and I liked them. Also, once I got started working there, I found out that Mrs. Gleybner brought delicious homemade sweeelves in the morning, and wonderful soup for lunch. Suppertime, they would send me to the delicatessen or the Chinese restaurant, and we would eat at the table in the back of the store.

During the day, I would dust and vacuum, unpack books, and wait on customers, and when nothing was happening I could read. Mrs. Gleybner spent a good part of each day visiting with other shopkeepers on the street, and Mr. Gleybner would read, work at his desk, and take naps in his rocking chair. There was a store cat named Little Gray Man, and he and I got to be very good friends.

The best thing about working in the UFO Bookshop was the customers.

"The finest and most interesting people in all Poughkeepsie come into this shop," Mr. Gleybner said.

Of course, I did not know all the people in Poughkeepsie, but the ones who came into our shop were mostly very satisfying to observe and talk with. 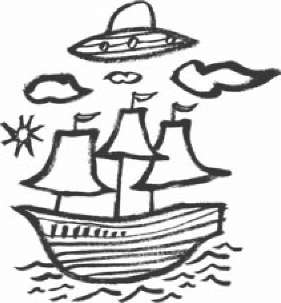 I sent a letter to Yggdrasil telling about things I was learning. I told her how Alexander the Great had seen two flying saucers in 329
B.C.,
how Edmund Halley, who discovered Halley's Comet, saw one in 1676, how Christopher Columbus had seen one in 1492, and how one was seen in 1783 from Windsor Castle in England. I also told her about Little Gray Man, and how nice the Gleybners were to me.

She wrote back to me that Crazy Wig had seen the word "Poughkeepsie" in a vision and said it had something to do with my destiny, and that everybody there sent their love.

I also wrote to Iggy about Poughkeepsie.

Poughkeepsie is different from Los Angeles. it is an old city, about 300 years old! There are strange-looking old houses, and some of the streets curve and bend and go every which way. There are lots of trees, and a creek twists and turns through the city. in the old days, the creek turned water wheels that powered mills and factories that made piano keys, cough drops, ladies' underwear, buggy whips, licorice whips, and buttonhooks, and some of them are still there. A big river runs past, and there is a ridiculously high and precarious-looking railroad bridge that goes over it. There are trolley cars that run on tracks, and a gigantic madhouse on the north side of town. And even though it's a city it's surrounded by countryâyou cross a street and all of a sudden it's farms and forests. There
are wild bunnies, rats, and opossums in the business district. The people like to eat jitterbugs, which is the name of a dish consisting of a slice of white bread with a slice of meatloaf on it, and on top of that a scoop of mashed potato, all of it covered with brown gravy. I haven't tried oneâtoo disgustingâbut they are sold everywhere. I spend all my spare time exploring.

Give my love to Neddie and Seamus, Crazy wig, and all our friends. 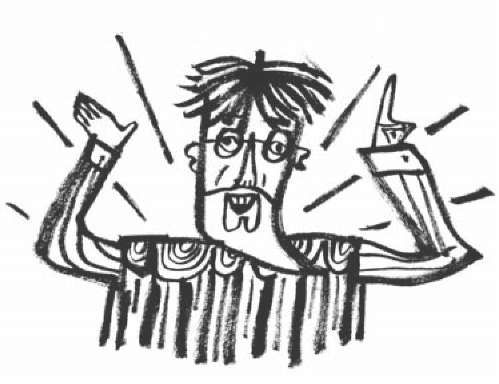 I missed my friends in Los Angeles, but I wasn't lonely. People came into the bookstore every day, and most of them liked to talk. And it was only a half-block to Main Street, where the bigger stores were, and lots of people. Also, there was a trolley, or streetcar, that ran on tracks from the loony bin, and patients who weren't considered dangerous would come every day to walk around, sit on the benches, and watch the normal people. A lot of the loonies were interesting to talk to. And of course, some people were both mental patients and customers.

I do not have a problem with my appearanceâI am a nice-looking girl with lovely whiskers. But some people do tend to stare or ask silly questions. I got a lot less of this in Poughkeepsie than I had in Los Angeles.
The bookstore customers were all sure, like the Gleybners, that I was an outer-space alien girl. I learned to avoid specifically saying whether I was or was not. It meant a lot to them, thinking I was. Besides, I sort of am. The loonies tended not to mention the whiskers. I think they weren't sure if they were seeing them or hallucinating.

Probably my favorite customer, and also my favorite loony, was Professor Tag from Vassar, a girls' college not far from Main Street. He was a cute little old guy with a tangled gray beard. He talked fast and was always excited about something. If you didn't know he was a professor, you would have thought he was a bum. I liked him because he was always smiling and laughing, and because he liked me.

Once a year, Professor Tag would go nuts and they would move him up to the loony bin for a whileâthen he'd get over being nuts and they'd bring him back to teach his classes. He told me all this himself, and sure enough, a little while later he went nuts. I asked the Gleybners why he hadn't been in the store for a while, and they told me he was up at the insane asylum for his annual cure. So one Sunday I took the streetcar up to the place to visit him.

The insane asylum was big and sad and scary. It was not just a building as I had imagined. It was a lot
of buildings, like a whole not-so-little town. The main building was the biggest. It looked like a scary castle. The streetcar stopped in front of it, and I went in the main entrance to the office and told them I was there to visit Professor Tag. The lady in the office picked up a phone and talked to someone. Then she told me I could go outside and sit on a bench and Professor Tag would be along.

There was a very large lawn sloping down from the main building, with some benches facing it. The lawn ended in trees, and beyond them I could see the mountains on the other side of the river. There were a few people sitting on some of the benches, and others strolling around, or just standingâpatients, I guess, or people who worked there, or visitors like me. I picked a bench and was enjoying the view when I became aware of someone standing behind me.

It was a girl about my age, but short and tiny with biggish hands and feet. She was looking over the top of the bench at the mountains in the distance, but it didn't seem that she was seeing them. I was pretty sure she was blind for a minute or two until she shifted her gaze and looked directly at me with strange blue eyes that seemed to shimmer.

"My ancestral home is over there," she said. I
couldn't tell for sure if she was talking to me or to herself.

"In those mountains?" I asked.

"I notice lots of things other people don't," she said. "I'm intelligent."

"Is that why you're here? Did they make you come to this hospital because you notice things other people don't?"

"And are they doing you any good?" I asked.

"Not really. I'm hoping it goes away by itself. My name is Molly."

"By the way, I like the whiskers," Molly said.

"Everybody does," I said.

"I notice you're not a patient," she said. "You don't look miserable enough."

"I'm here to visit someone. Do you know Professor Tag?"

"Oh, he is practically my favorite person here," Molly said. "Do you miss your parents very much?"

"I don't even remember my parents. They went away when I was very small. My uncle raised me."

"Yes, but do you miss them a lot?" Molly asked.

Something I had noticed talking to the loonies who come down to Main Street is that very often when crazy people are not actively being crazy, they are less crazy than regular people who are a little bit crazy at all times. When Molly asked me if I missed my parents a lot, I realized that I did miss themâeven though I couldn't remember them. I had been missing them all my life. It surprised me that I had never figured this out before, and it hit me kind of hard.

All kinds of thoughts were running through my brain. I must have noticed it before, but it struck me just at that moment that Uncle Father Palabra had never told me much about my parents. All he ever told me was that they went away when I was very small. I must have asked him questions about them, but I couldn't remember him giving any answers. After a while, I must have just stopped asking. And also, just at that moment, it struck me that feeling I didn't fit in where I was, and wanting to see other places and other planes of existence, probably had something to
do with my mother and father not being there. And all this stuff had been tucked away in my head, and I never thought about it until this loony girl had asked me if I missed themâand why did she assume they were not with me and were to be missed? She must have read my mind, my subconscious mind.