Adventures of a Cat-Whiskered Girl (3 page)

"There's a big house not far from here, a mansion actually, and the people who live there swing from trapezes with chimpanzeeses."

At first I thought Molly had simply changed the subject and was telling me something factual, and then I realized that her craziness must have just cut in.

"We ought to go there sometime," she said. "It would be interesting to see."

Professor Tag appeared from around the corner of the building. He was wearing a woman's dress, sort ofâit looked like he had made it out of a big window curtain. He had made a wig out of what looked like the business end of a mop, and he was singing an old song called "Someone Left a Biscuit on the Landing."

"Ah, Audrey! You came to visit me! And I see you have met Molly, a wonderful girl."

"Thank you," Professor Tag said. "As God is my witness, I'll never be hungry again."

"I didn't realize you'd been hungry," I said.

"It's a line from a movie," the professor said. "Scarlett O'Hara says it in
Gone With the Wind.
"

"And is there any particular reason you are wearing a dress?" I asked. "Not that it isn't a very nice one."

"Thank you," Professor Tag said. "Allow me to introduce myself, or anyway, the person I think I am. I am Sir Edward Hyde, Third Earl of Clarendon, also known as Viscount Cornbury. I am the governor of this colony, and the town of Hyde Park, just to the north of here, is named after me."

Professor Tag said this in such a high-toned way that I felt the only appropriate thing to do was stand up and curtsy to him. Molly did the same.

"Oh, as Lord Cornbury it was my custom to dress up in women's clothing and go walking in the evening. Also, I liked to hide in the bushes and jump out at passersby and scare the spit out of them."

"This is good," I said to Molly. "Here's a loony imagining himself to be some other loony."

"You should have been here yesterday," Molly said. "He thought he was Lewis and Clark." 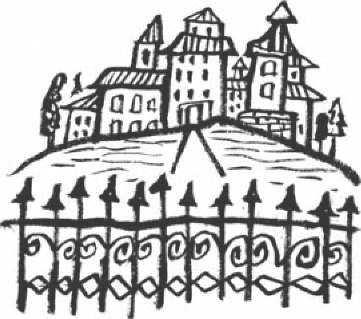 "I hope I am not speaking out of turn," I said to Molly. "But you don't seem nearly as wacky as the professor here."

"Oh, he's about at the top of the treeâat least for patients allowed to walk around loose," Molly said. "We're all proud of him."

"Did you have the blueberry pancakes this morning, Molly dear?" Professor Tag asked. "They were extra scrumptious."

We were strolling around the grounds now, the three of us. Other patients and visitors were strolling too. I have to say, it was a pleasant and restful place, even if the buildings looked like the set for a scary
movie and there was a fence with iron bars all around the property.

"I see the shuffleboard court is not in use," Professor Tag said. "If you like, I could check out the equipment and we could have a game."

"This place is a little like a resort or a hotel," I said.

"That's the theory of it," Professor Tag said. "It's an old-fashioned idea, but as good as any, I suppose. The place itself is supposed to cure us. They provide pleasant and handsome accommodations ... that is, pleasant and handsome according to nineteenth-century ideasâthat's when all these big insane asylums were built. They provide decent food, nice grounds to walk in, diversions and simple tasks for those who can do them, and people are supposed to get well."

"Does it work? Do people get well?" I asked.

"Some do, but they might have anyway. Incidentally, I don't know how late you were planning to stay, but there is an excellent film this evening,
The Snake Pit.
It's a wonderful comedy. I've seen it several times."

"What about you?" I asked Molly. "I mean, in what way are you crazy? I can see how the professor isâhe's just a regular insane person."

"And one of the very best," Molly said.

"Thank you," the professor said.

"Credit where credit is due," Molly said.

"But you're not like him. Why are you on the inside?" I asked.

"Oh, it's because I notice things," Molly said.

"But before you said that wasn't why you're in here."

"I also lie," Molly said. "No, that was a joke. What I mean to say is, in addition to noticing things anyone might notice, I also notice things going on in 18 people's heads."

"Yes, and I also read trees and rocks and things. I can read places. This place, the hospital, is very sad reading, I can tell you. Not everyone enjoys being crazy like the professor here."

"So, what am I thinking right now?" I asked Molly.

"So what is the professor thinking?"

"He's thinking about how many cows could be put to graze on the hospital lawn."

"Forty-two!" the professor said. "I would suggest Guernseys. They're very nice cows."

"So they put you in here because you can read minds? Why would they do that if you really can?"

"Well, to begin with, they think I can't. They think I'm imagining it. And then there are the voices."

"Are they real voices or voices because you're cuckoo?"

"They're in my head. They sound real to me, but that is what every voice-hearing loony thinks."

"Whose voices are these, and what are they saying?"

"No idea about who. And they seem to be talking to one another, not to me. It's like ... well, did you ever pick up the phone and hear another conversation faintly going on in the background?"

"I think so. Are you able to make out what they're saying?"

"Not usually. I have an idea they are not of this world."

"Maybe ghosts, or little men in flying saucers, or maybe they aren't there at all and I'm a nutcase. It's puzzling." 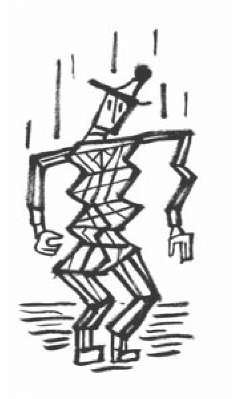 While we talked we had been walking. Away from the big spooky castle of a main building and the big lawn, there were trees, streets, and houses, bungalows, little apartment houses, playgrounds, a little old-fashioned schoolhouse that appeared to be closed, a church. Some of the houses were for the people who worked at the old insane asylum and their families. It really was like a little town.

"When I was quite a small child, my father, Professor Tag, would take me to New York City of a Sunday."

"Your father was a professor too?"

"No, that was his first name. He worked for a commercial dairy in the town of Poughkeepsie. I am
named after him, and I am also a professor, so my name and title is Professor Professor Tag. Anyway, in those days, men would sell things in the street. I remember a wonderful toy. It was a limber dancing man, with stretchy arms and legs made of accordion-pleated crepe paper, with a cardboard head, hands, and feet.

"The sidewalk sellers would make them dance amazingly, and they alsoâthough I did not know or understand itâwould conceal in their mouths a tiny device known as a ventrilo, with which they would make music and funny noises. Understand, I was very small, and didn't have any knowledge of mechanical things, and I was nearsighted and not yet fitted for glasses, so I never saw the thin black thread by which the dancing men were suspended, and was unable to figure out that a paper toy would not be able to dance by itself.

"I begged my father to buy me one of the amazing things, and as it only cost a few coins, he obliged me. I rode home with him, on the train to Poughkeepsie, in a state of high excitement. I was going to amaze my mother, my little siblings, and all of my friends with the magical toy.

"Naturally, when unwrapped, it was nothing but a cheap paper doll with a string attached. It did not dance, let alone make amusing noises. Had my father
not been completely inept and ignorant of mechanics, he might have explained to me that it was the skill of the sidewalk salesman that made the doll perform, and perhaps together we might have made some kind of attempt to work it. But he was as baffled as I was and thought we had been cheatedâthat a useless copy of the dancing man had been fobbed off on us. He swore vengeance on the dishonest tradesman, and made me swear too that I would track him down to the ends of the earth and get my father's thirty-five cents back. And indeed, until I was twenty-one years of age, that was the central concern of my life."

CHAPTER 6
Through the Gate 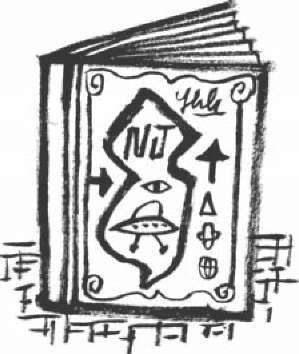 We had walked all the way to the back side of the grounds. There was an open gate, and a road beyond it.

"I mean, are you allowed to leave the premises?"

"I don't see anyone stopping us," the professor said.

"Unless you're tired," the professor said. "As for me, I feel like walking more."

"What you were saying before, about the voices and all that..."

"Well, I do have one. You spotted me as a visitor from another existential plane. That is something that just about never happens. How do you know about such things?"

"Well, it's my belief that things are very different from what they seem. For example, space ... space may not be an illusionâor it mayâbut it is very much easier to get around than is commonly supposed. I think it's possible to get from here to there in a snap."

"I came from my plane of existence to Los Angeles on a bus," I said. "It took under two hours."

"Doesn't surprise me," Molly said. "I have also worked out that people are immortal, or comparatively immortal, so at different times one carries on one's life in various forms and in various places."

"The Hindus believe this," the professor said.

"Then I agree with them," Molly said. "And, I believe there is a finite number of personsâthis includes the animating principle of whales, bunny rabbits, microbes, and eggplants. So it's interchangeable parts, and everybody gets to play all the roles, given enough timeâwhich may or may not be an illusion, but anyway works quite differently from the way most people think it does. And given enough time, you will meet everybodyâat least everybody
you're supposed to meet ... and then ... meet them again."