Read Aftershock: The Next Economy and America's Future Online

Aftershock: The Next Economy and America's Future 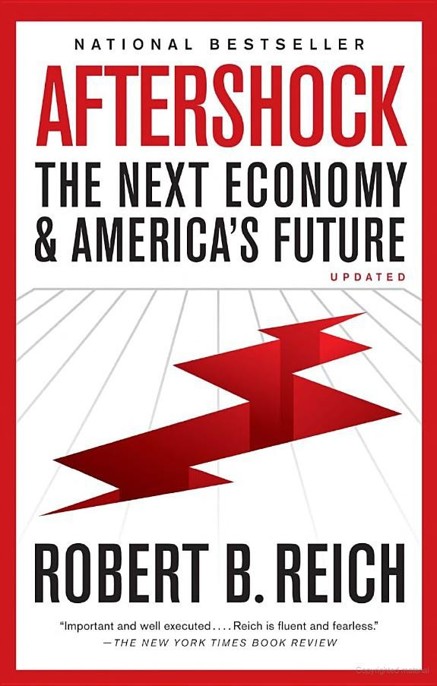 ALSO BY ROBERT B. REICH

The Future of Success

Locked in the Cabinet

The Work of Nations

Tales of a New America

The Next American Frontier

AS EDITOR
The Power of Public Ideas

AS COAUTHOR, WITH JOHN D. DONAHUE
New Deals: The Chrysler Revival and the American System

THIS IS A BORZOI BOOK
PUBLISHED BY
ALFRED A. KNOPF

Copyright © 2010 by Robert B. Reich
All rights reserved. Published in the United States by Alfred A. Knopf, a division of Random House, Inc., New York, and in Canada by Random House of Canada Limited, Toronto.
www.aaknopf.com

To Ella Reich-Sharpe, and her generation

Epochs of private interest breed contradictions … characterized by undercurrents of dissatisfaction, criticism, ferment, protest. Segments of the population fall behind in the acquisitive race.… Problems neglected become acute, threaten to become unmanageable and demand remedy.… A detonating issue—some problem growing in magnitude and menace and beyond the market’s invisible hand to solve—at last leads to a breakthrough into a new political epoch.

PART I
The Broken Bargain
Chapter 1. Eccles’s Insight
Chapter 2. Parallels
Chapter 3. The Basic Bargain
Chapter 4. How Concentrated Income at the Top Hurts the Economy
Chapter 5. Why Policymakers Obsess About the Financial Economy Instead of About the Real One
Chapter 6. The Great Prosperity: 1947–1975
Chapter 7. How We Got Ourselves into the Same Mess Again
Chapter 8. How Americans Kept Buying Anyway: The Three Coping Mechanisms
Chapter 9. The Future Without Coping Mechanisms
Chapter 10. Why China Won’t Save Us
Chapter 11. No Return to Normal
PART II
Backlash
Chapter 1. The 2020 Election
Chapter 2. The Politics of Economics, 2010–2020
Chapter 3. Why Can’t We Be Content with Less?
Chapter 4. The Pain of Economic Loss
Chapter 5. Adding Insult to Injury
Chapter 6. Outrage at a Rigged Game
Chapter 7. The Politics of Anger
PART III
The Bargain Restored
Chapter 1. What Should Be Done: A New Deal for the Middle Class
Chapter 2. How It Could Get Done

In September 2009, on the eve of a meeting of the twenty largest economies, Treasury Secretary Tim Geithner, assessing what had happened to the United States in the years leading up to the Great Recession, repeated the conventional view that “for too long, Americans were buying too much and saving too little.” He then went on to say that this was “no longer an option for us or for the rest of the world. And already in the United States you can see the first signs of an important transformation here as Americans save more and we borrow substantially less from the rest of the world.” He called for a “rebalanced” global economy in which Americans consume less and China consumes more.

Geithner was correct about the transformation. But he misstated the underlying problem, of which the Great Recession was a symptom. The problem was not that Americans spent beyond their means but that their means had not kept up with what the larger economy could and should have been able to provide them. The American economy had been growing briskly, and America’s middle class naturally expected to share in that growth. But it didn’t. A larger and larger portion of the economy’s winnings had gone to people at the top.

This is the heart of America’s ongoing economic predicament. We cannot have a sustained recovery until we address it. It is also our social and political predicament. We risk upheaval and reactionary politics unless we solve it. The central challenge is not to rebalance the global economy so that Americans save more and borrow less from the rest of the world. It is to rebalance the American
economy so that its benefits are shared more widely in America, as they were decades ago. Until this transformation is made, our economy will continue to experience phantom recoveries and speculative bubbles, each more distressing than the one before.

Our history is not quite a pendulum because we never return exactly to where we were before. It is more like a spiral, in which we arrive at roughly the same points but at different altitudes and with somewhat different perspectives. Yet each turn of the spiral gives rise to similar questions about the nature and purpose of an economy. How much inequality can be tolerated? When bets go sour and the economy nosedives, who gets bailed out and who are left to fend for themselves? At what point does an economy imperil itself politically, as large numbers conclude that the game is rigged against them? Most fundamentally, what and whom is an economy for?

Technically, the Great Recession has ended. But its aftershock has only begun. Economies always rebound from declines, even from the depths of the darkest downturns. To this extent, the business
cycle is comfortably predictable. Businesses eventually must reorder when inventories grow too depleted, families have to replace cars and appliances that are beyond repair, and modern governments invariably spend what they can and make it easier to borrow money in order to stimulate job growth. The larger and more interesting question is what happens
next
. If the underlying “fundamentals” are in order—if consumers are subsequently capable of spending and saving; if businesses have good reasons to invest; if governments maintain a fair balance between public needs and fiscal restraint; if the global economy efficiently allocates savings around the world, and if the environment can be sustained—then we can expect healthy and stable growth. But if these conditions are out of whack, economies as well as societies become imperiled.

I will argue here that our fundamentals are profoundly skewed, that the Great Recession was but the latest and largest outgrowth of an increasingly distorted distribution of income, and that we will have to choose, inevitably, between deepening discontent (and its ever nastier politics) and fundamental social and economic reform. I believe that we simply must—and will—choose the latter.

The future is uncertain, of course, but indications are that the so-called recovery will be anemic. A large percentage of Americans will remain jobless, or their wages will drop. American consumers will not be able to spend enough to keep the recovery going. Without sufficient customers, businesses will not invest enough to fuel a sustained period of growth. Foreign markets, especially China, will not buy enough American exports to make up for the shortfall because they will be concerned about their own unemployment; they will have to fuel their own economies. And the U.S. government will not be able to run deficits large or long enough, or keep money cheap enough for a sufficient length of time, to fill the gap.

As a result, the economy will turn out to be weaker than it was during the phantom recovery of 2001–2007, during which consumers, having drained their savings, had money to spend only because they could borrow against the rising values of their homes—sometimes irrationally, as has been made clear by the loud burst of the housing bubble. The so-called recovery before that, which lasted through most of the 1990s, was more fragile than many assumed at the time. It ended when families could not work any more hours and when the “dot-com” bubble inevitably burst. That legacy is with us as well.

The underlying problem emerged around 1980, when the American middle class started being hit by the double whammy of global competition and labor-replacing technologies. But rather than strengthening safety nets, empowering labor unions, improving education and job training, and taking other measures to better adapt the American workforce, the nation turned in the opposite direction. Instead of implementing a new set of policies that would enable the middle class to flourish under these very different circumstances, political leaders—reflecting the prevailing faith in an omnipotent and all-knowing free market—embraced deregulation and privatization, attacked and diminished labor unions, cut taxes on the wealthy, and shredded social safety nets. The manifest result was stagnant wages for most Americans, increasing job insecurity, and steadily widening inequality. The benefits of economic growth accrued to a smaller and smaller group.

In the late 1970s, the richest 1 percent of the country took in less than 9 percent of the nation’s total income. After that, income concentrated in fewer and fewer hands. By 2007, the richest 1 percent took in 23.5 percent of total national income.
It is no mere coincidence that the last time income was this concentrated was in 1928. I do not mean to suggest that such astonishing consolidatons of income at the top directly cause sharp economic declines.
The connection is more subtle. As the economy grows, the vast majority in the middle naturally want to live better. They know it’s possible because they see people at or near the top enjoying the benefits of that growth in the form of larger homes, newer cars, more modern appliances, and all the other things money can buy. Yet if most people’s wages barely rise, their aspirations to live better can be fulfilled only by borrowing, and going ever more deeply into debt. Their consequent spending fuels the economy and creates enough jobs for almost everyone, for a time. But it cannot last. Lacking enough purchasing power, the middle class cannot keep the economy going. Borrowing has its limits. At some point—1929 and 2008 offer ready examples—the bill comes due.

It is far easier for government to interpret these episodes as temporary financial crises—attributing them to excessive levels of debt, and trying to cope with them by flooding financial institutions with enough money to maintain their solvency and avoid runs on banks—than to fix the fundamental problem. But as I will show, the high debt is a symptom rather than the cause of such crises. Because politicians are interested first and foremost in being reelected, they will opt for short-term fixes that do not overly disturb the moneyed interests on whom they have grown more dependent as the costs of campaigns have escalated. The rich, for their part, defend their disproportionate affluence as a necessary consequence of their disproportionate talent and essential role.

The meltdown of 2008 was a window into the American economy’s underlying flaws. Only by dint of an extraordinary effort—the Federal Reserve Board lowering interest rates to near zero and making it easier to borrow, and Congress and the White House bailing out Wall Street, cutting taxes, and spending hundreds of billions of dollars on infrastructure and unemployment benefits—was the economy kept from going over the brink,
as it had some eighty years before. These efforts were enough to remove pressure for fundamental reform. Apart from legislation to expand the nation’s system for delivering health care to the uninsured, little was done to overcome the widening inequality and accompanying insecurity that lay at the Great Recession’s core, relative to what was done in the wake of the Great Depression. As soon as it was possible, moneyed interests declared the recession over, saying that the system had worked, and then lobbied intensively against major change—leaving the underlying problem unaddressed. And too many politicians, eyeing upcoming elections, were just as eager to declare that the economy was returning to normal. In the short term, overly optimistic economic forecasts deliver high returns for incumbent politicians and investment bankers; the rest of us pay a price in the long term.