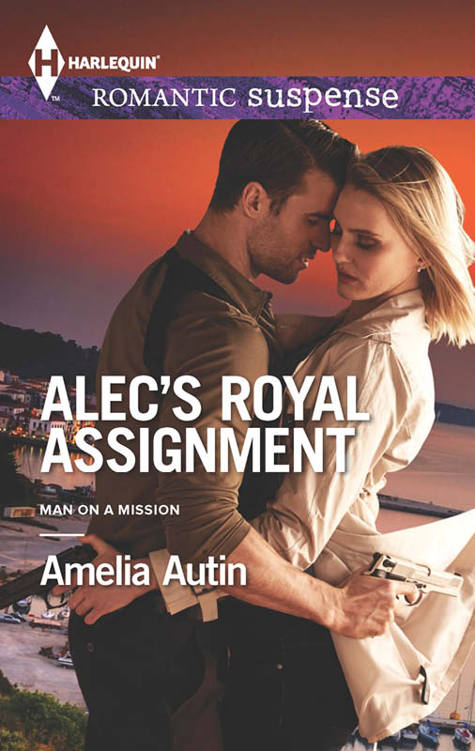 In the Man on a Mission series, a special agent becomes one woman’s most dangerous weakness…

Bodyguard to the queen of Zakhar, lieutenant Angelina Mateja is unwilling to risk her reputation or her job for US special agent Alec Jones—no matter how sexy and irresistible he is. Alec’s been recruited by the king to root out a human trafficking ring—not get up close and personal with a stunning woman who practically radiates touch me and die. But after sharing a mind-blowing kiss, Alec can’t deny the fire simmering beneath Angel’s cool exterior. As the danger—and their attraction—intensifies, Angel is forced to choose between the job of her dreams, and the man who is starting to occupy her heart…

Their lips met. Their mouths fused as if they were both firing shots over the bow in a take-no-prisoners stance.

Hunger roared through his body, and an aching need to give her back just a tiny fraction of what she was giving him.

Angelina tore herself out of his embrace. “Why did you do that?” she asked him finally.

“Because you wanted me to.” It sounded arrogant put that way, so he added, “Because I wanted to.”

“Which? That I wanted to kiss you?” One corner of his mouth twitched upward into an engaging grin. “I wanted to. Oh, yeah, I definitely wanted to, since the first moment I saw you.”

She shook her head. “Not that. You said I wanted you to kiss me. And that is not true.”

Alec’s grin faded, and he held her gaze with his steady one. “Oh, yes you did,” he told her, accepting the truth even if she refused to acknowledge it. “You wanted to know what it would be like. We both did. And now we know.”

And nothing will ever be the same again.

Be sure to check out the next books
in Amelia Autin’s exciting miniseries:

Man on a Mission—
These heroes, working at home and overseas,
will do anything for justice, honor…and love

If you’re on Twitter, tell us what you think of
Harlequin Romantic Suspense!
#harlequinromsuspense

When I wrote
McKinnon’s Royal Mission
, part of my Man on a Mission miniseries, two characters who intrigued me were Princess Mara’s other two bodyguards—Diplomatic Security Service agents and brothers, Alec and Liam Jones. So alike in many ways, and yet so different in others. They are emotionally close, as brothers should be, so I started writing their stories simultaneously, weaving the plots together into a cohesive whole, although each book stands on its own.

But it was the brothers’ differences that caught my imagination. While both men are protectors, Alec, the older of the two, is
more
—more assertive, more demanding of himself, more demanding of others, as well. Alec needs a woman who understands what motivates him…because she’s motivated by the same things—honor, duty, loyalty and sacrifice. Like Alec, Angelina Mateja has stepped between danger and the person she’s guarding. Has been forced to kill in the line of duty. And like Alec, her career is the most important thing in her life…until they meet.

Readers often ask, “Where do your story ideas come from?” We live in a violent world. Tragedies happen every day. In the case of
Alec’s Royal Assignment
, it wasn’t just one idea, but several, sparked by real-life occurrences and what-if scenarios. And a heroine whose moral stand on right and wrong matches Alec’s…and mine.

I love hearing from my readers. Please email me at
[email protected]
and let me know what you think.

Amelia Autin
is a voracious reader who can’t bear to put a good book down…or part with it. Her bookshelves are crammed with books her husband periodically threatens to donate to a good cause, but he always relents…eventually.

Amelia returned to her first love, romance writing, after a long hiatus, during which she wrote numerous technical manuals and how-to guides, as well as designed and taught classes on a variety of subjects, including technical writing. She is a longtime member of Romance Writers of America (RWA), and served three years as its treasurer.

Amelia currently resides with her PhD engineer husband in quiet Vail, Arizona, where they can see the stars at night and have a “million-dollar view” of the Rincon Mountains from their backyard.

Man on a Mission

For my sister, Diana MTK Autin, Esq., whose Edward Everett Hale quotation on FB sparked an idea, and who helped me get the legal details correct (any errors are mine and mine alone). And for Vincent…always.

Though itself part of the US Department of State, the Bureau of Diplomatic Security is the parent organization of the Diplomatic Security Service (DSS). The DSS is the primary tool by which the DS carries out its security and law enforcement mandate.
For more information, please visit
state.gov/m/ds
.

Excerpt from
Protecting the Colton Bride
by Elle James

D
iplomatic Security Service special agent Alec Jones turned automatically when the front door opened and let a stream of light into the coffeehouse. He and his date were in the vestibule waiting to be seated, along with a couple of her local acquaintances—husband-and-wife schoolteachers. Alec watched with detached, professional interest as two bearded young men dressed as security guards entered. Their garb and their holstered sidearms appeared innocuous enough, but there was something off. And Alex’s sixth sense instantly went on the alert.

He glanced over at Darla, but she was caught up in conversation with her friends. Alec had only been posted as regional security officer, or RSO, for a month at the embassy where Darla had been serving for a year as personal assistant for the US ambassador to this tiny Middle Eastern nation, and this was their first date.

Alec’s eyes flicked back to the two men. They’d taken seats near the front door as if they were patiently waiting their turn at a table. But one man was peering through the curtained window as if checking out the street. The other was watching the movements of the customers in the coffeehouse with cold, hard eyes. Alec’s sixth sense was humming steadily—something was definitely wrong.

His hand slid inside the jacket he always wore, even on the hottest days—and there were a lot of hot days in the Middle East—for his SIG SAUER P229R, one of the standard-issue concealed carry weapons DSS personnel used.

Without warning, the two men abruptly jumped to their feet, drew their sidearms and started shouting commands in Arabic and broken English. Alec’s semiautomatic was instantly out.

Nearly everyone in the coffeehouse hit the ground immediately, including Darla’s two friends. But Darla was shocked into immobility. She stared openmouthed at the gunmen, frozen with fear. And when the men turned their weapons on Darla and Alec—their faces twisted with hate, a fanatical light in their eyes—Alec fired.

It was all over in seconds. The two young men lay on their backs on the floor, unmoving. Their eyes were open and fixed sightlessly, guns still clutched in their hands. The shots they’d managed to get off had gone wide—only the gunmen had been hit. Blood stained their clothing crimson, pooling around their bodies.

But Alec felt no guilt. No remorse. He knew enough Arabic to know these men were terrorists—their shouted warning to the non-Americans to take cover and leave the infidels to them was easily understood, even with his less-than-perfect knowledge of the language. Their sole intent had been to abduct or kill the only two Americans in the coffeehouse.

Alec moved on autopilot now. He kicked the guns from the hands of both men into a far corner of the room. The training ingrained in him said you
never
take the death of the bad guys for granted. The only way to ensure safety was to neutralize the threat by removing any and all weapons from the vicinity. He didn’t think these men had any other partners in the coffeehouse, but you could never be sure. And he wasn’t taking any chances.

How had they known Darla and he would be here? The answer to that question would have to wait. Could Darla’s so-called friends have set them up? Possibly. This coffeehouse wasn’t frequented by Americans from the embassy, but Darla’s friends had insisted it had true “local flavor,” something Darla was interested in experiencing. It was something to consider...but not right at this moment. Not with the coffeehouse patrons staring at him in horror, as if he’d instigated this confrontation.

Alec bent over and quickly checked both men for a pulse he knew he wouldn’t find. Then he rifled through their pockets. He found zip ties, blindfolds, gags and a couple of switchblade knives—confirming their intentions—but no identification. Nothing to tell him who these men were or what terrorist organization they were affiliated with.

He lifted a corner of the curtain and glanced out the window. These two likely had a driver and a getaway car somewhere outside, but he couldn’t see anything that looked suspicious. And he couldn’t very well leave the scene to check. Not now. He’d have to depend on the local authorities to follow up on the getaway car...if it was still around. The gunfire had to have alerted the driver that things hadn’t gone down as planned, and he was probably long gone by now.

Most of the coffeehouse patrons had risen from the floor in the few seconds Alex’s back was turned, and many of them had cell phones out. Two of them began sidling for the door when police sirens were heard in the distance. Alec holstered his weapon, turned to them and said coldly in Arabic, “No one is leaving. You are all...” His mind frantically searched for the right word. “Witnesses. You are all witnesses.” He culled his knowledge of the language and added, “All of you will give a complete and accurate statement to the police.” He stared them down until they returned to their tables.

Alec’s eyes met Darla’s for the first time since the shooting, and he recognized the familiar look of shock and dismay most civilians displayed when confronted with sudden, deadly violence. Darla wasn’t naive—all embassy personnel were briefed on the hazards of working in the Middle East—but she’d never taken a human life. And she seemed appalled Alec had done so. Coldly. Dispassionately.

At least that’s how his actions appeared to her, he knew. Alec wasn’t cold. Nor was he dispassionate. He regretted the
necessity
of this killing, but the alternative was unacceptable. He wasn’t going to second-guess himself or his actions. Not now. Not ever.

As the distant sirens grew louder, Alec sighed softly. No matter what came next, he knew two things for sure.

One, despite the fact that he hadn’t instigated this incident, he would now be persona non grata at the US embassy here. The promotion posting as RSO he’d just received a month ago was now shot to hell and gone. Even though there were plenty of witnesses to back up a claim of self-defense, the State Department was hypersensitive about the possibility of reprisals. He would be whisked out of the country as soon as the local officials allowed, in order to hush this incident up.

Two, not as important but still important enough, his budding relationship with Darla had just died a quick death, too.

Which raised another question. Would he ever find a woman who understood?

Bendigo Shafter (1979) by L'amour, Louis
Down by the River by Robyn Carr
Think! by Edward de Bono
The Lost Years by Shaw, Natalie
One Day by David Nicholls
Thieving Weasels by Billy Taylor
The Dragon of Time: Gods and Dragons by Aaron Dennis
The Gunslinger's Man by Helena Maeve
Sin City Uniform 01 - All Fired Up by Morticia Knight
Fall into Her (Fall into Him Book Two) by Harper, Evelyn