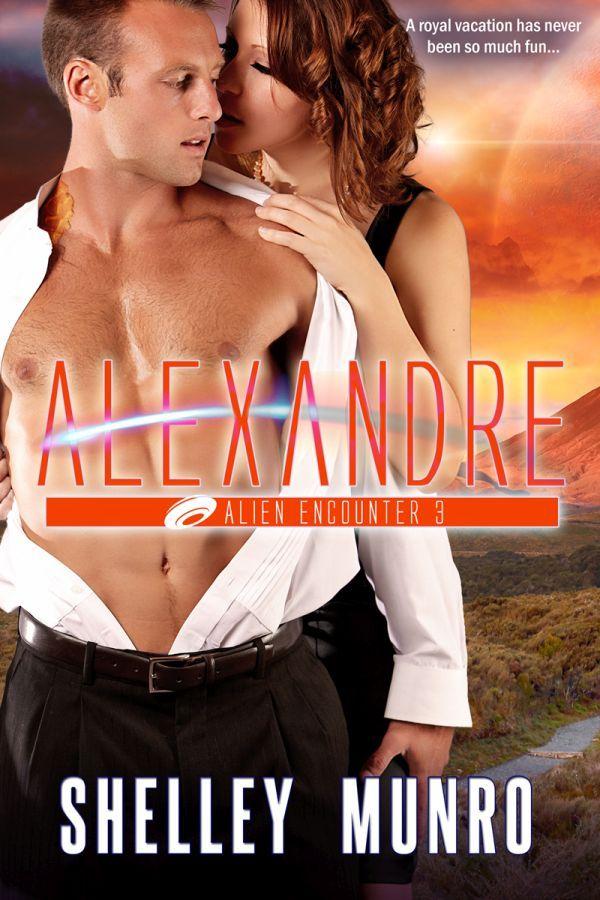 I’m thrilled to rerelease this series featuring aliens in New Zealand and of course, Killer, the talking dog. Scotty, our beloved dog, was the inspiration for Killer, and it was bittersweet reading the stories again since Scotty passed away a few years ago. But, on the plus side, rereading the books has inspired me to add to the series so watch this space!

I hope you enjoy Alexandre and Lily’s romance.
If you’re interested in learning more about my books and the Alien Encounter series, please visit my
website
or join my
newsletter
to receive news, contest announcements and goodies only available to newsletter subscribers.

Book 3 in the Alien Encounter series

Sex.
Lily Morgan hasn’t had any since her husband ran off with his boyfriend, but where will she find a man willing to overlook chronic clumsiness, dimpled thighs and cellulite?

Sex.
Prince Alexandre Bellangere has too much. Sex, that is. Continual treatment as a sex object is becoming a pain in the butt. Heck, he’s more than just a pretty face and muscular body. He possesses brains and ambition, yet Dalcon princes are expected to have sex, mate and breed royal undergrowns. Determined to change his life, he sneaks from the palace and leaves the planet disguised as plain Alex Bell.

Sex.
Lily Morgan takes one look at the golden stranger and starts thinking “what if?” Alex Bell sees the curvy travel agent and reconsiders his stand on sex—maybe.

Sex.
Lily’s family is not happy about her spending time with an alien. They decide to leave Killer, the talking dog, to keep an eye on the situation.

Lily noticed the man straightaway. Tall and golden, he prowled along the main street of Papakura, reminding her of a jungle cat. Proud. Determined. Aware of his surroundings.

Every other female in the vicinity noticed him too, but he didn’t hesitate or take any notice of the admiration. An elderly woman preened, patted her silver hair and promptly dropped her walking stick. The man stooped to pick it up, and she rewarded him with a coy smile. Lily would have bet the old girl’s heart pounded. Hers certainly did.

A trio of teenage girls put their heads together to whisper then burst into giggles each time they checked out his muscular physique.

Mrs. Pappadopoulos, the proprietress of the kebab shop across the road, rushed out with her straw broom and pretended to sweep her doorstep. Her gaze never left the golden cat. She might have fooled the man but Lily saw through her ploy. A dangerous stud seated at the window booth would boost sales during the slow back-at-work Monday.

Lily shifted on her wooden chair as she stared out the huge, plate glass window that fronted her travel agency. A frown formed between her brows. She could do with some customers to browse through her brochures and bring business. Her bank account was so far in the red it glowed like Rudolph’s nose at Christmas time. The statements arrived on a daily basis, a not so subtle reminder by the bank manager that her overdraft was at the upper limits of acceptance. Maybe she should hire the golden man to stand in front of her building? Her gaze swept over broad shoulders and a truly tempting masculine butt. A sigh of appreciation whistled through her lips. Nice view—but not for her.

Lily picked up her pen and aimed her gaze at the flickering computer screen. A scant two seconds later, her eyes were right back on the golden man. He turned. She sucked in a loud, startled breath that echoed and filled the travel agency, making her aware, more than ever, of the lack of customers.
Probably for the best
. No one to witness the overweight divorcée making cow eyes at an impossible dream.

An apt description. His short blond hair shone in the early morning light, the gentle sun picking out highlights that Lily envied. Even features arranged in a tanned face. His dazzling smile was definitely worth a second look. She wished she could see the color of his eyes. Curiosity propelled her need to know.
Maybe brown
, she decided.

Her gaze drifted downward. His faded blue jeans were skin-tight, highlighting muscles and bulges with loving care, and one knee peeked through a rip with each prowling step. A white cotton shirt accentuated his tan. White, Lily noted, bearing not a hint of what he ate for breakfast. She glanced down at her hip-length, cover-all-sins top. Two ugly brown splotches marred the light green fabric.
Yep, definitely coffee splashes
, Lily sighed as she glanced up again to follow the man’s progress.

The man stopped outside the kebab shop. Mrs. Pappadopoulos beamed and hurried forward to greet her cash fall. She made a sweeping gesture with her right hand toward her best table. The golden man smiled.

Lily’s heart skipped a beat. “Holy heck,” she whispered in awe. There was a whole street and two footpaths between them yet she reacted to him physically. A tight sensation in her chest reminded her to breathe again.

The teenagers waltzed into the kebab shop, hips swaying, small pert breasts stuck out proudly. Lily didn’t blame them. She realized she’d sucked everything in while glued to the unfolding drama. Not that things moved into place as promptly as she liked. For starters, her breasts had never, ever looked pert.

Lily blinked rapidly to clear the sudden onslaught of tears. Past history. She was never going there again.

She sniffed and concentrated on the scene in the kebab shop. The elderly lady had found a friend, and they both stepped through the door Mrs. Pappadopoulos held open for them. Once they were over the threshold and safely inside, she shut it so they couldn’t leave in a hurry. Lily supposed the oldies could always break out using their walking sticks if they got desperate.

Mrs. Pappadopoulos returned to the golden man. He flashed his smile again, and warmth suffused Lily. The underwire bra she wore nipped at her delicate flesh, and she wriggled uncomfortably. Damn, she was gonna have to break the piggy bank to buy the next size up. Not good.

The golden man said something. Lily saw Mrs. Pappadopoulos’s shoulders slump as she spoke in return. The bell on the kebab shop door tinkled merrily as the golden man sauntered outside. Lily stared as he crossed the street without checking for traffic. With her luck, she would’ve ended up squashed flat as roadkill on a Sloan country road. He emerged with nothing more serious than disheveled hair, and dammit, that made him look sexier.

Okay. Show time over. Things to do. Bills to pay.

But Lily couldn’t drag her gaze off him. The view was even better since he was much closer. Chest pains forced her to suck in a breath. She stared, mesmerized. An urgent need to touch filtered through her brain. No. No. No! Why was her body not cooperating? The slow prickle of awareness that tightened her full breasts pissed her off. Her mouth firmed and her grip tightened on her favorite, lucky pen.

Never again
. But still she looked, unable to tear her gaze from the wide shoulders, trim hips, and…uh…muscular legs. Lily shivered and tried to recall exactly what underwear she’d donned this morning. Just in case she outdid her usual clumsiness and sprawled at his feet. The memory wasn’t comforting. A white bra—well, okay, off white with a pink tinge and black granny bloomers. Not— Holy shit! It didn’t matter what she wore. Even if the golden cat was interested, she wouldn’t let him touch her. No way, no how was she letting a man close enough to rip her heart out again.

She tore her gaze off the male’s muscular thighs and barely resisted the urge to check out other bodily bits. The golden man paused outside her travel agency. He saw her through the window and smiled, his brown eyes glowing with an inner fire.

Lily’s jaw dropped. Her hand started to shake and her silver pen somersaulted through nerveless fingers to do a perfect backward half pike before it landed somewhere under her desk. The golden man reached for the door.

He was coming in.

What the hell was she gonna do with him? That was assuming she could remember how to speak.

If you hurt my sister, I’ll break every bone in your body
.

The second Alex caught sight of the Earthwoman in the travel agency, Luke Morgan’s threat echoed through his mind. Accompanying threats from Janaya, from Hinekiri and her mate, Richard, had followed the warning. Alex wasn’t forgetting the snarls and yaps from Killer, the dog beast with more attitude than spots. And the opinionated creature had plenty of spots.

His amusement dimmed as he recalled the casual dinner with new friends that had turned into a threat-fest and orders to make sure his travel inoculations were up to date. The warning from Janaya, Luke’s mate, had been particularly scary since she was an ex-Imperial Guard and knew lots of ways to make a male suffer. As an undergrown male, he’d once sneaked into the Imperial Guard’s training hall. The screams he’d heard had featured in his nightmares for weeks after his adventure.

In truth, he did not intend to cause any harm, and they must have seen he was genuine since they’d agreed to send a letter of introduction with him. He peered through the window, catching the Earthwoman’s attention. That must be Lily Morgan. The woman fit the description her family had given him. She looked pleasant enough with an oval face and a wide, rosy mouth perfect for kissing, but he wanted her brain, her knowledge, her expertise and not a warm place to massage his tom.

He, Alexandre Bellangere, second in line to the King of Dalcon, was sick of being a pampered Prince. Tired of having his chest and ego stroked by palace groupies. Alex refused to fall into line like his oldest brother and end up a notch on some bimbo’s bedpost. Nope. No longer did he intend to be a sex toy paraded around the palace like a trophy. And he absolutely refused to bestow his Royal House of Dalcon mark on any female. He intended to go into trade and become a productive citizen, one with purpose to his existence. His father’s decision to match him up with a neighboring female of suitable aristocratic blood had set the seal on his decision to leave.

Alex pushed the door open and stepped inside. Bright posters covered the walls, showing enticing views of places on Earth he intended to visit. Places he’d read about—pyramids, rainforests, mountains. Historical Earth cities. Excitement pulsed inside him like the beat of a Dalconian drum. At last, his dream was on the way to reality. Bellangere Grand Tours would celebrate its first birthday this cycle. No, day. That was the correct word.

The low, musical voice strummed across Alex’s senses. He tore his attention off the shelves filled with brochures, turned to the woman and smiled. The black nameplate on the desk bore the name
Lily Morgan
in gold lettering. This woman was prettier than he’d imagined. The Earth magazine he’d picked up to ease the boredom of space flight had been full of pouting, skinny creatures with jutting bones that looked sharp enough to cut and draw blood. He’d considered the females ugly and uncomfortable for playtime, but this one possessed sweet curves.

Lily Morgan wore her brown hair tied back from her face with some Earth contraption, and loose tendrils softened her face. She had cute little brown spots sprinkled across her nose and cheeks. He couldn’t see how tall the Earth woman was, but she had a pleasing amount of flesh on her bones, good-sized breasts that would fill, nay, overflow his cupped hands—not that he was looking.