Read All Days Are Night Online

All Days Are Night 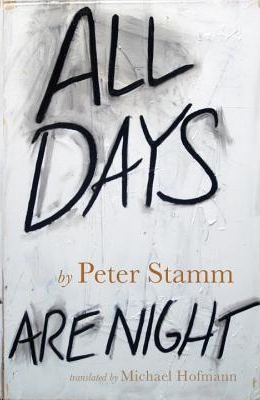 PRAISE FOR
ALL DAYS ARE NIGHT

“
All Days Are Night
grapples with concepts like gender performativity, the construction of identity, and creation through destruction, yet the weightless prose makes it accessible reading. Stamm leaps between years and periods of the main characters’ lives effortlessly, blending flashbacks into the present to link place and meaning in that special, voyeuristic way fans of his work will instantly recognize. I recommend this novel to anyone who has spent a significant amount of time questioning the reality of self-hood and anyone who has scrupulously avoided doing so.”

“With frightening lucidity,
All Days Are Night
captures the real in the unreal — clear and sharp and delicate, like patterns etched in glass. This smart, compact novel is yet another reason readers of new fiction need to pay more attention to Peter Stamm.”

“In
All Days are Night
, Stamm watches his characters create art, act in plays, die, love, and mortify each other and themselves all in quest of something no one is quite sure of. It’s a story of uncertain passion, withheld devotion, and the grief that comes simply from living. Reading this book is like reading something that exists entirely in the margins: confessional, but voyeuristic; and heartbreaking, but apathetic. Stamm negotiates the modern love story with a careful grace, and leaves us wanting more of we-don’t-know-what.”

“To write about appearances, you have to be more than willing to look in the mirror. In
All Days Are Night
, Peter Stamm outrageously asserts the unseen: the life after death of lives once lived in vain. Tempered by prose as undaunted and neat as a stethoscope, yet brimming with revelation,
All Days Are Night
is fearless.”

In Strange Gardens and Other Stories 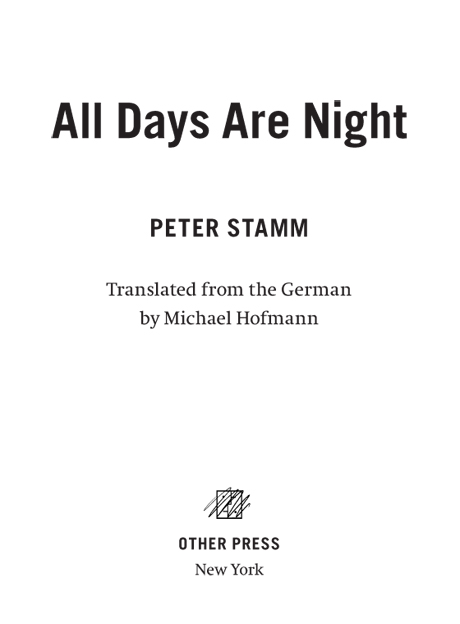 All rights reserved. No part of this publication may be reproduced or transmitted in any form or by any means, electronic or mechanical, including photocopying, recording, or by any information storage and retrieval system, without written permission from Other Press LLC, except in the case of brief quotations in reviews for inclusion in a magazine, newspaper, or broadcast. For information write to Other Press LLC, 2 Park Avenue, 24th Floor, New York, NY 10016.

Or visit our Web site:
www.otherpress.com

All days are night / By Peter Stamm ; Translated from the German by Michael Hofmann.

All days are nights to see till I see thee
,
And nights bright days when dreams do show thee me.

Half wake up then drift away, alternately surfacing and lapsing back into weightlessness. Gillian is lying in water with a blue luminescence. Within it her body looks yellowish, but wherever it breaks the surface, it disappears into darkness. The only light comes from the warm water lapping her belly and breasts. It feels oily, beading on her skin. She seems to be in an enclosed room, there’s no noise, but she still has a sense of not being alone. Love is somewhere, filling her.

Time skips ahead. When she hears a whooshing sound, she opens her eyes. Now she is all alone. On the wall are rows of points of light that weren’t there before. She closes her eyes; the whooshing sound fades and disappears entirely.

Later, a white-clad figure is moving by her side, hands soothingly extended, and disappears. Gillian feels a faint nausea that is almost pleasant, a wooziness tugging her down, back into sleep. Then it’s light, everything is dazzlingly white. On the bedside table is a tray with breakfast. A smell of coffee, also of flowers. Very slowly her body awakens, she can feel her legs and her arm, pushing away the covers, the cool air on her bare skin. She feels little pain, only a sense of collecting herself and dissolving
again, a slow pulsing. Next to her is a hand. It presses a button, it is her hand. Something lifts her up, she can hear a quiet humming. Breathing feels unusually easy, as though the air streamed into her body and left it again perfectly unhindered. A finger presses a green button, which has a little icon of a bell on it. Time passes.

The white-clad figure enters the room, approaches the bed, and, without asking, pushes the bedpan under her. And once again, the feeling of dissolving, the warmth streaming from her body.

Gillian says something; it sounds like a short bark. She feels she is only inhabiting a tiny part of her body, which seems very big to her, an empty building full of noises and uncontrolled movements. Each time she walks into a room, someone seems to have just left it. From somewhere she can hear conversations, laughter. Gillian dashes down a flight of steps, but once again she’s too late. Napkins lie crumpled on the white tablecloth, with wine stains and breadcrumbs.

It’s raining. Gillian wonders how long she has been lying here, but she expects no answer. She barely has strength for the question. She is sitting forward in bed, though she can’t remember how she got into such a position. Suddenly she can feel something cold, first it’s just a point, then it becomes a spine. It’s dabbed on stroke by stroke, until she can feel it all, from top to bottom. There’s a smell of alcohol. The radio is on, Gillian hears the time signal, a voice is
speaking very quickly, she can pick out single words that don’t make much sense. The UN special representative, the Mars probe
Beagle 2
, a semifinal victory in the Australian Open, an area of low pressure over the Bay of Biscay. Isolated showers. In her thoughts she repeats: the UN representative, the Mars probe, the area of low pressure, and she tries to grasp the connection between them. The cold sensation passes, and she no longer feels her back, the nightshirt drops like a curtain. Breathlessly, Gillian waits for it to rise again. Someone gives her a push, and she’s running onto the stage, looking utterly disorientated. She turns to face the audience, looks into the footlights, and bows low. Three, four curtain calls, and the applause dies away, the brief moment of happiness is over. Gillian knows she was no good and that the director will tell her so, again. You were just acting, he will say. You need to live the part.

You can lean back now. Would you like me to leave the radio on?

Gillian tries to concentrate. Everything depends on her reply. She wants to be herself, to get up, but she can’t. She can’t move her legs, it’s as though she has no legs. The radio stops, the nurse walks over to the window and draws the curtains. Gillian remembers: the rain, the low-pressure area. There must be a connection.

You should try and get some rest.

Rest from what? Something has happened. Gillian is hovering around it, the memory, she is moving closer and then getting farther away from it again. When she puts out her hand, the pictures disappear, and the blue water comes instead, the blue water and the empty space. But
the other thing is there all the time, waiting for her. She knows there is a way out, and she will take it. Later.

The doctor pulled a chair up to the bed and settled himself on the armrest. In his hand he was holding a mirror, a toy mirror in a pink plastic frame. He asked her how she was doing.

Better, said Gillian. I’m getting there.

For the first time, she could remember.

Two days, he said, when she asked him how long she had been here. A month, a year — it wouldn’t have surprised her.

We had to give you strong painkillers.

It wasn’t a bad trip, said Gillian, and tried to laugh.

When she raised her hand, the doctor caught it with a sudden, gentle movement. Don’t, he said. You shouldn’t touch the place.

He launched into a description of her face, a dispassionate and technical listing, but Gillian couldn’t quite understand what he was saying. Then he described the operations — the procedures — that would be necessary.

In six months there will be little or no trace.

Trace of what? asked Gillian.

It’s relatively straightforward to put an ear back, said the doctor, but a nose has a great many delicate blood vessels. We are going to have to build you a new one.

It doesn’t look very pretty at the moment, he said, but I still think it’s a good idea for you to take a look at it.

Gillian closed her eyes, opened them, and put out her hand. The doctor handed her the mirror. She turned it this
way and that, like a weapon she didn’t know how to use. She saw the window, the many bunches of flowers in the room, the door, and the doctor’s face. He smiled and asked her a question, but she missed it, she was still adjusting the mirror in space, as though looking for the right frame, and then she lowered her arm.

Is it very bad?

He nodded and said again, in six months’ time. Someone who doesn’t know you will hardly notice a thing.

What about someone who knows me?

We try to get as close a likeness as possible, God knows there are enough photographs of you. You’ll be surprised, he added. Plastic surgery has made great strides.

How come I can smell coffee without a nose?

The olfactory centers are in here, said the doctor, bracketing his nose with his finger and thumb. He stood up. Would you like me to leave the mirror with you?

After the doctor was gone, Gillian picked up the mirror with a quick movement and held it very close to her face — as though to hide behind it.

She couldn’t remember when they told her. Maybe they hadn’t told her at all, and she just knew. Or guessed. Matthias was dead. There was silence, just the soughing of the wind in the trees, a dripping of water, and an erratic creaking sound, as of bent metal slowly relaxing. An orange light flashed on and off. Gillian felt no pain, only the sense that her face was wet. In her mouth she had the metallic taste of blood. She wasn’t able to turn her head, but out of
the corner of her eye she had noticed Matthias slumped over the steering wheel as though exhausted. He didn’t move, he surfaced, disappeared, surfaced, disappeared. Even when there was light, his face looked dark, ruddy like the face of a drinker. If only she had been able to turn off the blinking light, then everything would have been all right, and she could have gone to sleep. But she couldn’t move. And then, slowly, the pain came, in her chest, in her legs, in her face. It was as though she had never felt her face before, her features seemed to be bunched together like a fist. Matthias was dead. What was she going to do with all his things? What would she say to his family and friends? She thought of the food in the refrigerator, spoiling, and the potted plants drying out. Then she suddenly felt certain that Matthias was not dead. It’s not possible, and the thought came as such a relief to her that she almost laughed out loud. It’s not possible.