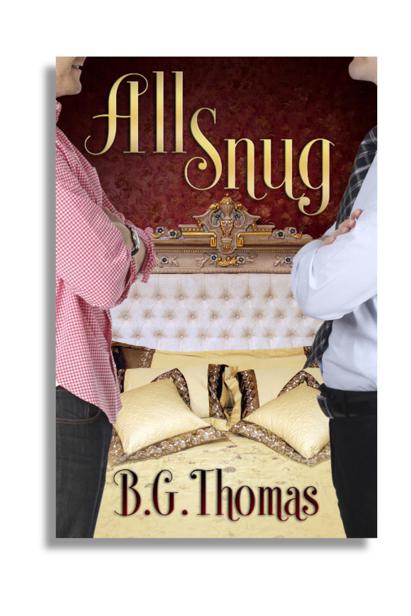 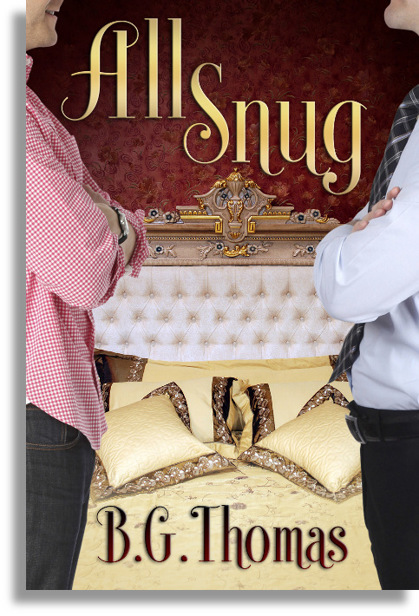 For Raymond, for ten years—

and for the idea for this story...

THE more I thought about it, the more I knew I had to have

the bed. My boyfriend wanted it. It was Christmas. And while

it was a bit overpriced, I could afford it. Steve on the other

I’d thought about it for two weeks, and when Steve

casually mentioned it was still at the antique store, I made

up my mind. It was perhaps an excessive gift for a man I’d

been dating for less than two months, but when I thought

about what Steve and I would do in that bed, the scales were

bed was still available. So it was quite a surprise when I

arrived at Derringer’s early the next morning and asked for

the large, oak four-poster bed at the very same time as

another customer. The look on both the proprietor’s and the

other man’s faces (and my own, I’m sure, had I been able to

see it) were quite comedic really. Like they’d been caught

doing something they shouldn’t.

haven’t had anything like this happen in a long time. And it’s

been sitting there two months.”

The other man, youngish, slim, with dark hair and

think I was here first,” he said.

“I’m not sure,” Mr. Derringer said, adjusting his glasses.

“I did call last night,” I reminded Mr. Derringer. He knew

me; I’d bought a few things from him in the past, most of

them costly: a standing lamp, an oil painting, and a few

other odd items (more than one with a rather naughty

not seeming to want to look at either of us. “But, ah, you

“So?” asked the young man. “Does that mean I get it or

not?” He looked like he was about to go into fight or flight

mode. Which would it be? I wondered.

Mr. Derringer, nervous thing that he was, began to

shake, fumbled with some papers on his desk, removed his

glasses and began cleaning them. He looked back and forth

between us. “You both approached me at the same time,” he

said in that spineless voice of his. He drove me near insane

he could be so insipid. But he also found things that no one

else could. He had a gift for it.

“I’ve got my card out!” the young man practically

“I’ll pay cash,” I pressed. This was ridiculous, and I

didn’t want to be here all day. I did need to get to the office

I liked the sound of Derringer’s voice now. Holiday

season or not, cash was always good, and who knew if the

young man could even afford the bed. His peacoat looked

worn, his pants with tattered cuffs were just a little too long,

and his shoes had certainly seen better days.

“I don’t see why that makes any difference,” said the

young man. “What do you usually do in a situation like

“I’ll give you an extra hundred,” I said and pulled out a

The young man turned to me. “Look, I really want that

bed,” he said, his eyes wide and pleading. “The… person I’m

seeing really wants it. Anything else would just be a

Person? I smiled at the lack of pronoun and wondered if

that “person” was another man.

“I went through hell to get the money,” he continued.

“There isn’t anything else I want. It’s really important to me.

Oh, those eyes, I thought. Like a big puppy dog, but blue

instead of brown. This young man was just too sweet.

But why did that matter? I really wanted the bed as

well. Steve had a reason for wanting a four-poster bed, and

store. Steve was just crazy in the bedroom, any room for that

matter. I’d never known a man with such a sexual

imagination. My whole adult life had seemed to be filled with

men who considered tickling to be kinky. They’d given the

word “vanilla” a whole new definition. I’d resigned myself to

sexual mediocrity, and then Steve had shown up in my life.

mine to shame, a man who wanted to fulfill my every

Yet the kid looking at me, and he didn’t seem to be

much more than a kid, really did look like a puppy. One

expecting me to kick him as well.

“I am going to let you two decide,” said Mr. Derringer. “I

have a few calls to make. You two work it out.” He turned

and practically fled the room.

Please? Did he say “please”? I almost laughed, but knew

it would hurt the man’s feelings. I bet if I had shouted out

“boo” at that moment, the kid might have wet himself. Shit.

It would be like kicking a pup. I glanced down at my watch.

Oh, to hell with the office, I thought. It wasn’t going

anywhere. This young man intrigued me. “I’ll tell you what,” I

said. “Let’s go have some coffee and talk about this. We’ll

“I… I….” The young man paused and then seemed to

make up his mind. “All right,” he said, nodding.

I went to find Derringer. “We’ll be back. Don’t sell that

Mr. Derringer heard me. Most people did.

WE SAT down at a small table outside The Radiant Cup, my

pick as the best coffee shop in Kansas City. I loved

everything they made, especially their lattes. The young man

when he’d paid his bill, counting out his money almost to

pennies, it only confirmed my suspicions that this guy had

no business buying such an expensive gift.

I took a sip of my latte. Wonderful. Perfect as usual.

“You’ve been here before?” I asked.

“Nah, I usually just make my own.” The young man

laughed. “I can buy a can of coffee at Aldi’s for what a cup

is Aldi’s coffee. You get what you pay for.”

“And I want to pay for that bed,” he said excitedly.

“I don’t think you can really afford it. Am I right… what

“I’m Elliot. Shawn, I’m thinking you’ve got yourself in

hock to your eyebrows trying to buy that bed. That ‘person’

“Maybe,” Shawn said, chin out. “But it sure is going to

shock the shit out of him when I get it.”

I raised my brows despite myself.

should have the bed?”

I’m gay too.” I surprised myself at making the admission. Not

that I was ashamed, but I kept my private life private. There

could be many an important deal lost because of how some

I laughed. Didn’t look it? Was this guy for real? “You

Shawn blushed. It was a most delightful shade of pink.

“You’re just so… big. I think your arms are bigger than my

I laughed again. “Not quite,” I said. “I just like to keep

myself in shape. It’s amazing what you can do with a

personal trainer keeping on your ass. And there is nothing

wrong with your thighs.” Now what the hell had made me

Shawn went even more red and tried to hide his

expression by taking a long sip of his hot chocolate. I don’t

know if was his blush or the morning sun, but I was again

noticing just how blue his eyes were. Was he wearing

contacts? They were the most amazing color. And huge.

He really was sweet. Like a kid, but the more I looked at

Shawn the more I could see he was no kid. Surely no more

than about thirty, but all man. Handsome too. His skin was

pale, and it really brought out the shadow of a threatening

beard along his jaw. Maybe it was that complexion that

made his eyes look so blue? “How long have you been out?” I

Shawn almost spit out his chocolate. “What? Why do

“This guy you are seeing, is he your first boyfriend?”

“My second,” he said, chin out again.

“You just come out recently?”

“Why do you want to know that?” Shawn asked.

I shrugged. “You seem so naïve. How old are you?”

talk me out of buying that bed.”

“Just trying to get the lay of the land,” I said. It was

what I did. How I’d become so successful.

“I’m thirty-two. And how old are you, oh Master Yoda?”

It was my turn to nearly spit out my coffee. Master

fourteen, so I guess I know a few things.”

“Fourteen?” gasped Shawn, and once again did that

thing with his eyes. Made them look huge.

Oh, if we weren’t both already taken, I thought, I’d take

“You knew you were gay when you were fourteen?”

One look at him in those shorts of his, and Janet, my

‘girlfriend’ never had a chance.” As a matter-of-fact, it was

was in. I liked my body. It made up for what I considered a