Read America and the Pill: A History of Promise, Peril, and Liberation Online

America and the Pill: A History of Promise, Peril, and Liberation 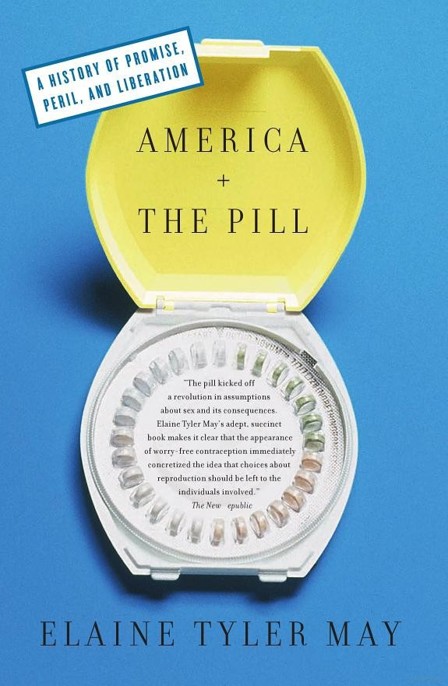 America and the Pill

“Elaine Tyler May is one of those rare historians who can take a set of complicated issues and make them both fascinating and compre- hensible. This book belongs on the bookshelf of anyone who wants to understand how the Pill changed the lives of women—and men.”

—
Margaret Marsh
, Professor of History at Rutgers University and coauthor of
The Fertility Doctor:

John Rock and the Reproductive Revolution

“With characteristic clarity and wit, May has produced a compelling history of oral contraception that incorporates medicine, morals, and popular media. In concise and carefully crafted chapters, she honors the feminists who enabled the initial research, explores the utopian hopes that the pill would solve world problems, and exposes the myths about its revolutionary impact. This balanced assessment of the pill takes into account not only science, religion, and the law, but especially brings to light the complex voices of the women who have both embraced and rejected oral contraception. A wonderful read for students and a timely source for professionals and the public con- cerned about sexuality, reproduction, and social policy.”

—
Estelle B. Freedman
, Edgar E. Robinson Professor in U.S. History at Stanford University and author of
No Turning Back: The History of Feminism and the Future of Women

“It takes a top-notch historian to separate myth from fact. On the historic 50
th
anniversary of the birth control pill, Elaine Tyler May reminds us that modern contraception has not been a destabilizing force, as so many fear-mongers would have us believe. To the con- trary, it has served as a powerful agent of change in the lives of mar- ried women liberated to balance work and family and to realize their full potential as human beings. By helping to elevate the status of women, birth control has promoted prosperity and well-being in America and around the world.”

—
Ellen Chesler
, author of
Woman of Valor: Margaret Sanger and the Birth Control Movement in America

“Before the iPod, before email, before personal computers even, the technology that truly changed the country was one little pill. Elaine Tyler May explores everything from population control to
Playboy
, libido to liberation, in this fascinating look at how the birth control pill has affected Americans at work and play since its inception in 1960. May’s eye for colorful anecdotes and cultural iconography makes this a delightful journey. Women who remember when the pill was approved by the FDA will rejoice in this hindsight view of how it in- fluenced the personal and the political, while a new generation will feel deeply grateful for the rights and liberties that they’ve taken for granted. This is history for people who are serious about sex.”

The Frightening New Normalcy of Hating Your Body

and Editor at Feministing.com

ALSO BY ELAINE TYLER MAY

Childless Americans and the Pursuit of Happiness Pushing the Limits: American Women, 1940–1961

Marriage and Divorce in Post-Victorian America

Tell Me True: Memoir, History, and Writing a Life

Here, There, and Everywhere:

A History of Promise, Peril, and Liberation

A Member of the Perseus Books Group New York

Copyright © 2010 by Elaine Tyler May Published by

Basic Books, A Member of the Perseus Books Group

All rights reserved. Printed in the United States of America. No part of this book may be reproduced in any manner whatsoever without written permission except in the case of brief quotations embodied in critical articles and reviews. For information, address the Perseus Books Group, 387 Park Avenue South, New York, NY 10016-8810.

Books published by Basic Books are available at special discounts for bulk purchases in the United States by corporations, institutions, and other organizations. For more information, please contact

America and the pill : a history of promise, peril, and liberation / Elaine Tyler May.

If [an oral contraceptive] could be discovered soon, the H-bomb need never fall. . . . [It would be] the greatest aid ever discovered to the happiness and security of individual families—indeed to man- kind. . . . The greatest menace to world peace and decent standards of life today is not atomic energy but sexual energy.

t was the spring of 1960. The U.S. Food and Drug Admin- istration had just approved the oral contraceptive for mar- keting. The pill’s arrival marked the culmination of years of development and testing and heralded a new era in the long history of birth control. For the first time, a method of contra- ception separated birth control technology from the act of sex- ual intercourse and was nearly 100 percent effective. Women

wasted no time demanding prescriptions—a surprise to doc- tors, who normally told their patients what to take, rather than the other way around.
2
Within two years of its approval, 1.2 million American women were taking the pill every day. By 1964 the pill was the most popular contraceptive in the coun- try, used by more than 6.5 million married women and untold numbers of unmarried women.
3
But “the pill,” as it quickly came to be known, was more than simply a convenient and re- liable method of preventing pregnancy. For its advocates, de- velopers, manufacturers, and users, the pill promised to solve the problems of the world.

In 1960, those problems seemed daunting. The nation was in the midst of cold war with the Soviet Union, locked in a battle for the hearts and minds—and markets and political alliances— of peoples around the world. Former colonies were gaining their independence, and the two superpowers vied for their al- legiance. American officials feared that communism might take hold in the developing world as a result of widespread poverty, due in part to the rapidly rising global population. They also foresaw that overpopulation could lead to human misery, unrest, violence, and war.

At home, the nation was in the midst of the baby boom. Couples married young and had children quickly. Yet Ameri- can women were growing restless. They were eager for a reli- able contraceptive that would free them from constant childbearing so they could take advantage of new opportuni- ties opening up for women outside the home. At the same time, the sexual revolution was churning just below the sur- face of domestic tranquillity. Despite the taboo against pre-

marital intercourse and the widespread celebration of mar- riage and family, the trend toward sexual activity without wedlock had already begun. A youth culture was emerging that would challenge many of the social, political, and sexual norms of the past, and the feminist movement was on the horizon. In 1960, when the Food and Drug Administration (FDA) approved the pill, the forces swirling around its arrival clashed in thunderous clamor.

While some observers and commentators feared that the pill would wreak havoc on morals and sexual behavior, others claimed that it would cure the social, sexual, and political ills of the day. In keeping with the military metaphors that perme- ated life in the early cold war era, many saw the pill as a “magic bullet” that would avert the explosion of the “population bomb.” By reducing the population, it would alleviate the con- ditions of poverty and unrest that might lead developing na- tions to embrace communism, and instead promote the growth of markets for consumer goods and the embrace of capitalism. The pill would also bolster the “nuclear” family in the nuclear age with its promise of marital bliss. By freeing married cou- ples from fears of unwanted pregnancy, it would foster planned and happy families—the key to social order. Medical and phar- maceutical promoters of the oral contraceptive often cast it as the means to this end, with success marked by the achievement of national and global transformation.

Curiously, the pill’s most vocal advocates were relatively quiet regarding the impact of oral contraceptives on those who would take them every day: women themselves. With the ex- ception of Margaret Sanger and Katharine McCormick, two

elderly activists in the women’s rights movement who were re- sponsible for the development of the pill in the 1950s, few of the pill’s earliest advocates saw its potential to liberate women. Women, however, saw it as precisely that. When the birth con- trol pill arrived on the market, it unleashed a contraceptive rev- olution. For the first time, women had access to an effective form of birth control that did not require men’s cooperation or even their knowledge.

The pill was indeed revolutionary, but it was not the first re- liable birth control method. For centuries, women as well as men had found ways to suppress fertility and avoid pregnancy. Prior to the arrival of the pill, men controlled two of the most widely used methods: condoms and withdrawal. Women em- ployed a variety of barrier methods, such as sponges, pessaries, and the diaphragm. Abortion was widely used as a method of birth control, and surgical sterilization was also available. Po- tions and remedies of various sorts appeared on the market in the nineteenth and early twentieth centuries. Sold as a means to “regulate” the menstrual cycle, they often came with bold warnings that their use might prevent pregnancy or cause mis- carriage. Women rushed to buy these products to achieve the dire consequences advertised on the product’s packaging.

In the 1950s, pharmaceutical companies gained FDA ap- proval for a hormonal compound that would cure menstrual ir- regularities by temporarily suppressing ovulation. Realizing its contraceptive potential, half a million American women sud- denly sought medication for “menstrual irregularity,” a condition rarely treated prior to the availability of the ovulation-suppressing remedy. In 1960, the FDA approved this compound as the first

Having full control over contraception was a mixed blessing for women, because it relieved men of any responsibility for preventing pregnancy, leaving the burden entirely on the fe- male partner. At the same time, the pill brought a third party into the equation: the doctor. Although the diaphragm, too, involved medical intervention for the initial fitting, there was no need to see a doctor thereafter. The pill, however, required regular checkups and monitoring. A doctor had to authorize every prescription and every refill. At first, few women com- plained about this intervention. As medical experts, doctors carried tremendous prestige and respect in the decades follow- ing World War II, when science and medicine gained unprece- dented stature. This was the era of the expert, and experts seemed to be solving problems right and left. Americans were well primed to place their faith in scientists, doctors, and the pill to solve global, social, and personal problems. Advances in medicine yielded penicillin and the polio vaccine, tranquilizers to calm Americans’ nerves in an era of anxiety, and now the pill, which promised to make unwanted pregnancy a thing of the past.