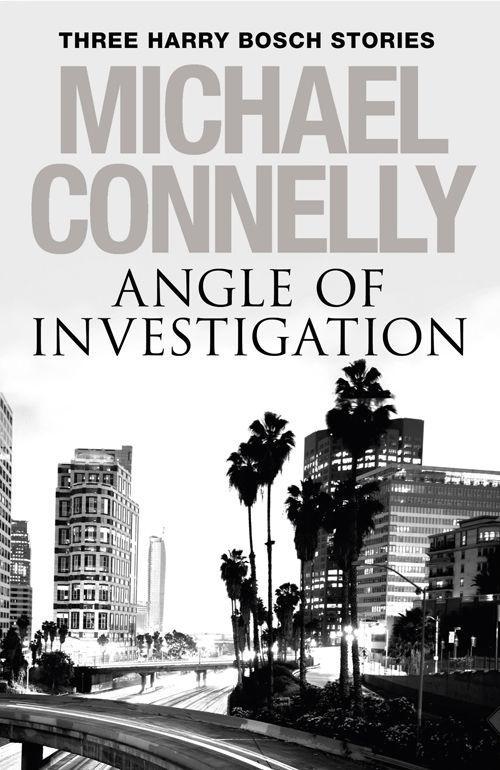 The Three Kings Pawnshop on Hollywood Boulevard had been victimized by a burglar three times in two years. The criminal methods of each break-in were similar and so it was suspected by the Los Angeles Police Department that the same thief was responsible each time. But the thief was careful never to leave a fingerprint or any other clue to his identity. No arrests were ever made and none of the stolen property was ever recovered. Nikolai Servan, the Russian immigrant who owned the store, was left to wonder about the justice system of his adopted country.

On the day before Christmas of this year Servan unlocked the rear door of the pawnshop, entered and discovered that his business had been victimized a fourth time. He also discovered that the burglar was still inside. It was this discovery that ultimately brought Detective Harry Bosch and his partner, Jerry Edgar, to the Three Kings Pawnshop.

Shortly after 10
A.M.
they arrived in a slickback Bosch had checked out of the motor pool at the Hollywood Division. They knew a burglary detective named Eugene Braxton was already waiting inside the shop with Nikolai Servan. Along with the body.

“Look at that, Harry, looks like a big old Christmas present,” Edgar remarked as Bosch killed the engine. “Just waitin’ for us to open it.”

Edgar was right. The exterior walls of the small, single-story pawnshop were painted a garish red. The yellow crime scene tape that had been strung across the front by the patrol officers looked like a bow. Bosch didn’t bother to comment on his partner’s observation. He got out and closed the car door.

“Cute,” Edgar said, looking up at the sign, too.

“Don’t worry about me, Har. I’m not going to hold things up. It’s Christmas Eve. I wanna wrap this thing up and get home early for a change.”

Bosch stepped in and moved through the front of the shop, past the bicycles and golfe="ize clubs and antiques and musical instruments, and reached the counter where Braxton and Servan waited.

Braxton, who had investigated the previous three burglaries at Three Kings, had gotten there first because Servan had his business card taped to the side of the telephone. When the shop owner came to work that morning and found the dead burglar behind the jewelry case, he didn’t dial 911. He dialed Braxton.

“Merry Christmas, Brax,” Bosch said. “What have we got?”

“Deck the halls, Harry,” Braxton said. “We’ve got one less burglar in the world. And that makes Christmas a good one for me already.”

Bosch nodded and looked at Servan, who was seated on a tall stool on the other side of the counter. He was about fifty with black hair thinning on the top. He had a lot of muscle that was going soft. He had no visible tattoos.

“This is Nikolai Servan,” Braxton said. “This is his store.”

Bosch reached a hand across the counter to shake Servan’s hand. The Russian came off the stool and shook hands firmly.

His accent was heavy. Bosch guessed he’d been in the country only a few years. Edgar reached across the counter and shook his hand as well.

Bosch moved around Braxton and over to the area behind the glass jewelry counter. Sprawled on the floor in this close space was the body. He was a white man dressed head to toe in black. All except for the right hand. It was not wearing a glove, while the left hand was. Bosch crouched like a baseball catcher next to the body and studied it without touching anything. A knit ski mask had been pulled down over the face. There were openings for the eyes and mouth. Bosch noted that the eyes were open and the lips were pulled back despite the teeth being closed together tightly. He spoke without looking up.

“On the way,” Braxton said. “That’s all I can tell you. Not much traffic today, though.”

The medical examiner’s team and the forensics people would be coming from downtown. Bosch and Edgar had driven only eight blocks from the station where they were posted.

“Can’t see enough of him to know for sure.”

Bosch didn’t say anything. He waited. He knew that Braxton had to have taken a quick look under the ski mask, even though this would have violated crime scene protocol.

“It kind of looks like a guy I popped about five years back nath=ears bamed Monty Kelman,” Braxton said.

“Most of the time. From what I heard, he used to take out-of-town assignments. Was on a crew that took work from a setup guy named Leo Freeling. Worked out of the Valley. But Leo got himself killed a few years back. I think Monty’s been sort of setting up his own capers since then.”

“Depends on the job.”

Bosch took a pair of latex gloves out of his pocket, blew them up like balloons to make them fit better and then slipped them on. He adjusted his position and tried to roll the body a little bit to check for wounds and the missing glove. He didn’t see anything but he didn’t want to roll the body completely over until after photos were taken and the medical examiner’s investigators surveyed the scene.

The question was rhetorical but he looked up at Servan just as he said it. It seemed to take the shop owner by surprise, as if he had been accused of something. Servan spread his hands and shook his head.

Bosch nodded and looked around the counter area. He noticed Edgar was no longer there. He looked at Braxton.

“Brax, why don’t you take Mr. Servan to one of the patrol cars so we can work in here.”

While Braxton took Servan outside, Bosch went back to the body and continued his examination. He lifted the bare hand and studied it, trying to figure out why there was no glove. He noticed a discoloration on the pad of the thumb. A brownish yellow line. There was a matching line of discoloration on the index finger. Using both hands he placed the thumb and finger together, aligning the two marks. It appeared as though the hand—the right hand—had been holding a pen or some other thin instrument when the marks had been made.

Bosch carefully placed the hand on the floor and moved down the body to the feet. He removed the right shoe, a black leather athletic shoe with a black rubber sole, and peeled off the black sock. On the ball of the dead man’s foot was a circular discoloration that was brown at its center, tapering outward in yellow.

Bosch looked up. It was Braxton.

It was Edgar. He was behind another display case on the other side ofustther si the shop. Bosch stood up and walked over. Edgar crouched and pointed beneath the case.

“There’s a black leather glove under the case. I don’t know if it’s a match but it is a glove.”

Bosch got down on his hands and knees so he could look underneath the display case. He reached under and pulled out the glove.

“If it does not fit, you must acquit,” said Edgar.

Bosch looked at him.

Bosch stood up. One of his knees made a popping sound as he did so. He looked into the case. It contained two shelves lighted from inside. On the shelves were non-jewelry items of what appeared to be high value. There were coins and some small jade sculptures, gold and silver pillboxes, cigarette cases and other ornate and bejeweled trinkets. It was high-end stuff. Most of the coins, Bosch noticed, were Russian.

Bosch stepped away from the case and surveyed the shop. Other than the two display cases there was mostly junk, the property of financially desperate people willing to part with almost anything in exchange for cash.

Braxton signaled him toward the back and led the way. Bosch and Edgar followed. They came to a rear room that was used as an office and for storage. Gravel and other debris were scattered on the floor. They all looked up. There was a hole roughly cut in the ceiling. It was two feet wide and there was blue sky above.

“It’s a composite roof,” Braxton said. “No big thing cutting through. A half hour maybe.”

“I remember I checked one of the other times this place was hit,” Braxton said. “He closes at four, reopens at eight. Four-hour window.”

“The roof the entry point in the other three hits?” Bosch asked.

“He hit the back door the first two times and then the roof. This is the second time through the roof.”

“You think it was Monty all three times before?”

“Wouldn’t doubt it. That’s what these guys do. Hit the same places over and over. After the second time the back door was used, Mr. Servan took precautions there. Added more steel reinforcement. So the guy went up onto the rook ionto thf.”

“Why this place so many times?” Edgar asked.

“A lot of immigrants come here. Russians, Koreans, from all over. They pawn the stuff they brought with them from the homeland. Jade. Gold. Coins. Small, expensive stuff. Burglars love that shit, man. That case where you found that glove? It’s all in there. That’s what the guy came in for. I don’t know why he ended up behind the jewelry case.”

“What’s been the take on the prior three?” Bosch asked.

“It’s probably averaged out to forty to fifty grand a hit,” Braxton said. “That’s on the high side for a pawnshop. That’s why this guy kept getting hit.”

A patrolman stepped back into the rear room and told the detectives that the medical examiner’s people had arrived.

The three detectives continued to huddle for a moment to discuss initial impressions and Bosch’s theory on what had happened to the burglar and to set a case strategy. It was decided that Edgar would stay on scene and assist the ME and SID teams as necessary. Bosch and Braxton would handle Servan and next-of-kin notification.

As soon as the medical examiner’s investigator rolled a set of prints off the burglar’s exposed hand, Bosch and Braxton headed back to Hollywood Division along with Nikolai Servan.

Bosch scanned the prints into the computer and sent them downtown to the print lab at Parker Center. He then conducted a formal and taped interview with Servan. Though the pawnbroker added nothing new to what he had told them in his shop, it was important for Bosch to lock down his story on tape.

By the time he was done with the interview he had a message waiting from a print technician named Tom Rusch. The prints were matched by computer to a thirty-nine-year-old ex-convict named Montgomery George Kelman. Kelman was on parole for a burglary conviction.

It took Bosch three calls to locate Kelman’s parole agent and to get the dead man’s current address and employer. He was told Kelman worked a morning dishwashing shift at a restaurant on Hillview. The parole agent had already received a call that morning from the restaurant owner, who reported that Kelman had not shown up for work or called in sick—as parole regulations dictated. The agent seemed pleased to learn he didn’t have to bother filing all the paperwork needed to show Kelman violated parole.

“Merry Christmas!” he said to Bosch before hanging up.