Read Another Kind of Country Online

Another Kind of Country 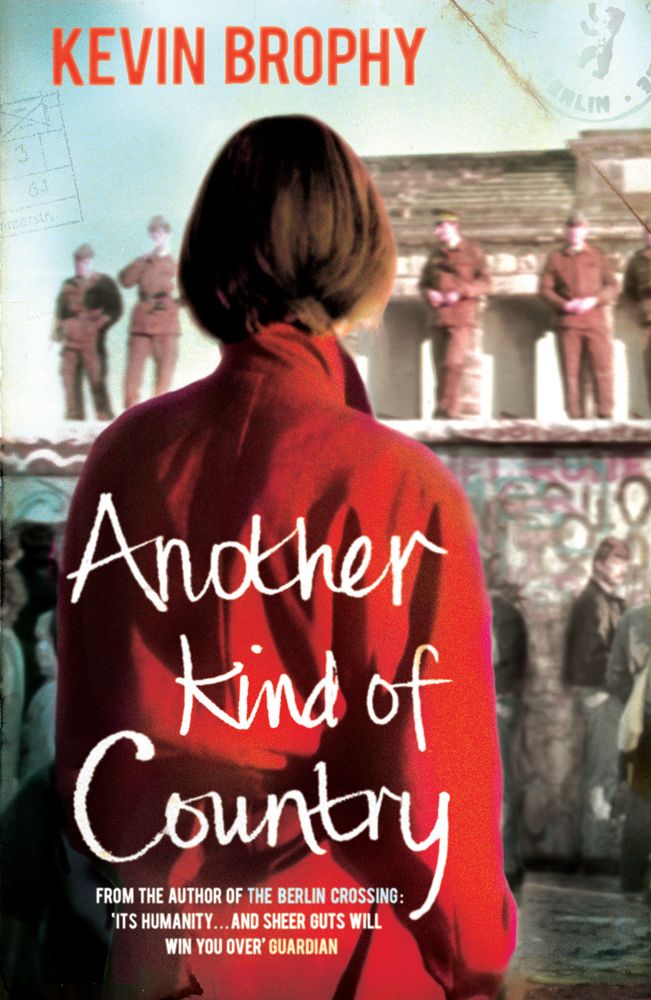 ANOTHER KIND OF COUNTRY
Kevin Brophy

The right of Kevin Brophy to be identified as the Author of the Work has been asserted by him in accordance with the Copyright, Designs and Patents Act 1988.

First published as an Ebook by Headline Publishing Group in 2013

All characters in this publication – other than obvious historical characters – are fictitious and any resemblance to real persons, living or dead, is purely coincidental.

From Chile to Germany, a heart-wrenching tale of love, loyalty and new beginnings.

Santiago, 1973: Rosa is a happy girl, living a privileged life amongst the ruling elite. But when violence erupts with the Pinochet coup, her socialist parents are the first to be taken. Forced to flee across the Andes, she finds herself rescued by a Stasi spy, and escapes behind the Iron Curtain to Germany.

East Berlin, 1989: Englishman Patrick Miller has crossed over and is working at the Secretariat for Socialist Correctness in Publishing. Dragged into a dangerous, cynical world of shady dealings on both sides of the Wall, Patrick doesn’t know what he believes in anymore. Until he meets Rosa. . .

Separate currents of the twentieth century have washed Patrick and Rosa up in a divided city that despite everything they’ve both come to love. As the Soviet Union starts to break up around them, the tide of change is too strong for even the much feared Stasi to hold back. But once the barriers are down and the rubble cleared, what kind of country will they be left with?

Kevin Brophy grew up in a military barracks on Ireland’s west coast and now lives in Galway. He has written various non-fiction titles previously and his chequered career includes stints as a postman and teacher, barman and businessman. He has lived in Ireland, England and Poland but feels most at home in Germany.

I am deeply grateful to Claire Baldwin, my publisher at Headline, for her help in focusing the thrust of this book. And likewise to my agent, Caroline Montgomery, for her patient nursing of me and my words.

Mairéad Joyce, with skill and good humour, transformed my handwritten pages into a twenty-first-century printout, for which I thank her.

Although I am too superstitious ever to discuss the workings of a novel-in-progress, I am always grateful to friends who inquire about progress, supply the balm of non-prying encouragement and then wisely and kindly move on to the business of sport, politics, films, travel and other important codology. In this regard I am grateful especially to my friend and mentor, Christopher Murray, and to my coffee-drinking mates, Paddy Lydon, Mossy Moran, Maurice Ward, Pat Kennedy, Ralph O’Gorman, Eileen Graham, Andrew Tomlinson, Aidan King and Terry Small.

And, as always, a special thank you for everything to Elizabeth Wölk.

It is too late to start

For destinations not of the heart

I must stay here with my hurt
.

He put the phone down gently
but it didn’t matter. Elena was standing
in the doorway, wearing
only his pale blue pyjama jacket.

‘Salvador?’ An edge of fear in her voice.

A jet screamed overhead in the early morning sky and he saw her body tremble in the thin fabric. He moved quickly towards her, put his arm around her shoulders.

He cleared his throat, tried to force into his voice a smiling confidence he did not feel.

She left the rest unsaid. It was 6.30 on Tuesday morning: this was an early start to the working day even for the workaholic President Salvador Allende of Chile.

She leaned into him, glad of the familiar wiriness of his chest hair. Yes, she knew – like all of Chile – how their President burned both ends of the candle in his pursuit of a socialist Chile. Who knew better? It was often after midnight when Franco dragged himself through the door after another crusading day at his Ministry for Industrial Development.

Another plane jetted overhead. The house itself seemed to tremble.

‘This is different.’ Her voice was muffled into his chest. ‘Isn’t it?’

‘Listen to me, Elena.’ He held her at arm’s length, surprised, even after all these years, by the way her casual beauty could astound him. ‘I need to go now, I have to be with him at the palace. I’ll send a car for you, with Felipe, he’ll take you and Rosa out of the city, to your parents.’

‘Rosa is going to school.’

‘Elena, there won’t
be
school today.’

‘Don’t be ridiculous,’ she tried to swing out of his grip, ‘it’s Tuesday, of course there’s school today.’

A deeper sound outside now, an almost subterranean rumbling. And Salvador’s words on the phone:
I had to get through a cordon of armed carabineros to get into the palace, there are tanks in the streets
. And now the tanks were growling mechanically through the leafy streets of the Barrio Alto. Allende’s own house was just a few streets away.

‘There are tanks in the streets, Mama! What’s going on, Papa?’

At the sound of their daughter’s voice they started, almost guiltily. Rosa was fourteen, long-legged, dark-haired.

She laughed, looking at her parents. ‘Sister Mercedes would be shocked!’ The rich, dark hair flounced as she shook her head in mock disapproval. ‘And are we so poor that you guys have to share one pair of pyjamas?’

Franco tried to draw his pyjama bottoms higher around his waist. Elena drew the pyjama jacket tighter across her breasts. Their lovemaking last night had been noisy; Elena’s hand on his mouth had tried, vainly, to stop his
groaning. And yet they’d never before been self-conscious about their sexuality in front of Rosa. Maybe, Franco thought, it’s that other growling outside that does it. The tanks at the palace. And now at our door.

‘I have to go,’ Franco said. ‘Felipe will be here as soon as I can arrange it.’

Rosa looked at them both, questioningly.

‘But I can’t! We have rehearsals this evening, the show is on Saturday night—’

‘Rosa, please.’ Franco looked at Elena. How did you explain to your teenage daughter that your government was under attack by its own generals?

‘But what about the play? And anyway I don’t want to go to the fucking country to my grandparents’—’

‘Rosa!’ Elena’s voice was sharp but what could you do to a strong-willed fourteen-year-old? ‘We don’t use language like that here!’

‘No, we just walk around half-fucking naked—’

Elena slapped her hard on the face.

The silence seemed deeper inside, the rumbling of the tanks louder outside.

With a cry Rosa spun away. They listened in silence to the angry footsteps on the stairs, the angrier slamming of the bedroom door.

Franco slumped into a chair.

‘I don’t know . . .’ He wasn’t sure of what he didn’t know. How could a jokey comment from a beloved daughter become a moment of anger, a flash of violence?

‘It’s just the way we are these days,’ Elena said. She was on her knees beside his chair. ‘All of us, waiting, for what we don’t know, a match to dynamite as if our whole country is a ticking bomb.’ Elena taught German literature at the
university; Franco envied the way she could spin pictures in words.

She took his hand. ‘You have things to do. You have a government ministry to run. Our President needs you. Get dressed and go to the palace. And don’t worry about Rosa. I’ll sort it out.’ There was a sadness at the edge of her smile.

He raised her hands, kissed them. ‘I’d be lost without you, Elena.’

‘You manage without me at the weekends.’

She hushed him. ‘It’s a joke,’ she said. At weekends he went to the country to a wife who refused to divorce him. For fifteen years, from Mondays to Fridays, they had shared a home in the Barrio Alto.

Twenty minutes later he was ready to leave, briefcase in hand. He wondered if she guessed that the briefcase held a loaded pistol.

‘You know what teenage girls are like.’ She made a minute and unnecessary adjustment to his tie. ‘She’ll cool down.’

‘I’ll call you when Felipe is leaving, make sure you’re ready.’

‘And you make sure you take care of yourself.’ She wanted to ask when he could join them in the country; she knew also that she mustn’t ask, that there was no way of knowing when. The air force in the sky and the army on the streets made that clear.

Their kiss was gentle, a long slow goodbye.

He touched her face, whispered that he loved her.

She heard the car starting up in the yard, the faint hum of the electric gates swinging open.

The air was rent by the screaming of jets. She thought she heard the sound of explosions in
the distance. She fingered her lips, as though she could trace his kiss on them.

And she whispered again her parting words: ‘
Vaya con Dios
.’

Laggan Lard Butts by Eric Walters
Ever Always by Diana Gardin
Shortstop from Tokyo by Matt Christopher
Jane Shoup by Desconhecido(a)
The Virgin Cure by Ami Mckay
The Dark Rift: Redemption by R. Brewer
A Brazen Lady And The Shunned Duke (Faces of Love Series #3) by Jessie Bennett
Take Me to the River by Will Hobbs
The Homicide Hustle by Ella Barrick
And Did Those Feet ... by Ted Dawe