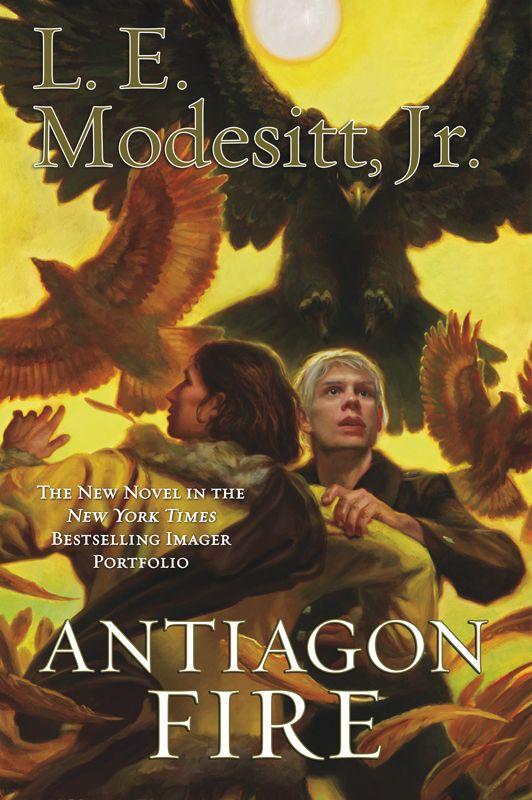 For Susan and Gary,

who proved fast friends in time of need

Quaeryt shivered. He opened his eyes to find himself looking up into a white sky, a sky from which flakes like icy needles jabbed at his exposed face. The low moaning of a deep winter wind filled his ears. Yet, for all that the icy needles fell upon his face, each one freezing, then burning, before penetrating his skin with a thread of chill that combined into a web that bled all warmth from his body … there was no wind.

Standing around and above him, in a circle like pillars, looming out of the icy mist drifting down over him, were troopers in the blue-gray uniforms of Bovaria. Each Bovarian was coated in ice, and each stared down at him, as if to demand a reason why they stood there, frozen and immobile … why he still lived and breathed.

Quaeryt tried, but his body was so chill, with the ice creeping up from the pure white fingernails of his immobile hands and from his equally white and unmoving toenails, that his chest did not move. Nor could he utter even a sound, his words as frozen as his body.

As he froze in the whiteness, the complete and utter stillness behind which moaned the winter wind of devastation, the dead troopers reproached him with their unmoving eyes and their silence …

Quaeryt stretched, then rose from the table in the breakfast room in the summer chateau of the late High Holder Paitrak. Bhayar had eaten and departed before Quaeryt and Vaelora had come down from their tower chamber.

“You don’t have to rush,” Vaelora said quietly, in the high Bovarian she and Quaeryt always used when alone. “You should have more tea. You had another dream last night, didn’t you?”

He nodded. “They’re not quite as often.” After a moment he added, “But I do need to get ready.”

“You’re not meeting with Bhayar until eighth glass.”

“What can he do? You handed him a great victory, and he’s now ruler of both Telaryn and Bovaria.”

Quaeryt raised his eyebrows. They’d talked about that the night before.

“All right. Ruler of the eastern half of Bovaria … and maybe the west and north,” his wife conceded. “He can’t exactly punish you for success.”

“No … but he can keep me as a subcommander and send me off to subdue the north, the northwest, the south, or the southwest.”

“The High Holders of the south already pledged allegiance,” she reminded him.

“Just those in the southeast.”

“Has he heard anything from the lands of Khel?”

“He hadn’t yesterday evening, and if the new Pharsi High Council there rejects his proposal…” Quaeryt shrugged.

“They’d be fools to do so.” Vaelora sighed, shaking her head slightly so that the wavy curls in her light brown hair seemed to ripple. “No, dearest, you don’t have to tell me how many fools there are in this world.” She smiled.

As he looked into her brown eyes, he couldn’t help but smile back at the woman who had raced across half of Lydar to bring him back from the near-dead. After a moment he replied, “I fear that he may send me as an envoy.”

“To prove to the Khellans that you are everything that Major Calkoran was sent to tell them you are?”

“Something like that.” Quaeryt walked to the window, where he reached out to pull back the curtains, then stopped for a moment to reposition his hand slightly. The two fingers on Quaeryt’s left hand still didn’t work, more than two weeks after Vaelora had finally roused him from a semicoma. While they didn’t hurt, and he could move them with his other hand, neither finger would respond to his desire to move. At least, with his thumb and the other fingers, he could hold and lift things.
Or draw curtains.
He was still disconcerted when he saw his fingernails—snow-white, just like every strand of hair on his body.

He eased back the curtains and looked out to the west. Most of the snow and ice his imaging had created to end the battle of Variana had melted, but the land was brown and sere, and the extreme chill had destroyed or rendered unusable many of the buildings on the west side of the River Aluse, excepting, of course, the Chateau Regis, whose walls were now alabaster white and nearly indestructible, not that anyone within had survived.

“You know they will. That’s not the question.” Quaeryt released the curtains and turned, catching sight of himself in a small mirror on the wall. His brown-tinted green uniform—the only one of that shade in all of the Telaryn forces, reflecting his background as a scholar—looked trim enough, although he knew it was looser than it had been, if somewhat darker than he recalled. “What happens after that is what matters.”