BOOK: Attack on the High Seas!
>>DOWNLOAD HERE >>READ ONLINE NOW
ads
Chapter 2
All Hands on Deck
“Arrr! I wonder what Rotten Tooth is going to make us do today?” I whispered to Inna and Gary. I had to whisper it real quiet, too, because Rotten Tooth could hear
everything
!
“Arrr! I hope it won't be anything soggy!” Gary said.
Then he sniffed, sniffed, and sneezed again. He sneezed so hard, he blew his glasses right off his nose.
“I don't care what it is as long as it's real pirate stuff,” I said. I want to be the captain of my own ship when I grow up, so I need to know everything about pirating. But most of the time Rotten Tooth didn't teach us any real pirate things. He thought we should all be deckhands. Lucky for us, he wasn't the boss of the ship. Captain Stinky Beard was, and he thought we were shipshape pirate kids.
“ARRR! Fall in, ye scurvy pups!” Rotten Tooth said with a snarl.
Inna, Gary, and I rushed over and stood in a straight line. Then we gave Rotten Tooth a salute. Even if he was as rotten as his name, he was still our teacher and the ship's first mate, so we had to give him a salute. That's part of the pirate code.
Rotten Tooth paced in front of us. The
Sea Rat
shook as he stomped his boots. “Where be those other two pollywogs?” he asked.
I shook my head.
Inna shrugged her shoulders.
And Gary sneezed.
I thought for sure Aaron and Vicky were going to get stuck with kitchen duty. But just then we heard footsteps. Aaron and Vicky burst through the door and ran over to us, their mouths still full with one last bite of sea slug cereal. “Arrr! Ye sea dogs made it just in time,” Rotten Tooth said. “Ye be lucky I'm a nice pirate.”
“Aye, nice and stinky,” Vicky whispered to me.
I had to cover my mouth to hold in my giggle.
“Arrr! I don't have time for ye mangy litter today,” Rotten Tooth mumbled. “The
Sea Rat
is being chased by another ship. A rival pirate ship named the
Filthy Sails.
”
We all gulped!
The
Filthy Sails
was the most dreaded pirate ship there was. Grown-up pirates were always telling scary stories about the ship to us pirate kids. They said it sank every ship it attacked and made the crew walk the plank. Even the kids! And its captain, Captain Fish Face, was even meaner than Rotten Tooth. And uglier, too! He had whiskers like a catfish, and his face was all squished up like a fish.
“Are they going to attack?” Inna asked.
I could tell she was a little scared because her hand was shaking. But I wasn't scared. Captain Stinky Beard could outsmart that fish-faced captain.
“Can we help fight them off?” I asked.
“AYE! We'll sink their ship lickitysplit!” Aaron shouted.
Rotten Tooth waved his arms in the air. “Quiet,” he growled. “The only thing ye will be doing is keeping out of the way!”
We all moaned and groaned. It sounded like Rotten Tooth was going to make us do chores, like swabbing the deck or emptying the fish-gut tank. It wasn't fair. We were part of the crew, too.
I stepped forward and raised my hand. “But Captain Stinky Beard said you had to teach us more pirate stuff.”
“Arrr! I'll be teaching ye all right,” he barked. “But the cap'n never said
what
I had to teach you. Ye little shipmates think pirating is all swashbuckling and treasure?”
“Aye! And good grub, too!” Aaron said.
“Aye! And pretty jewelry!” Inna said, and proudly showed us her shiny necklace.
Rotten Tooth let out a fearsome laugh. He laughed so loud, I saw the sails puff up! “Captain Stinky Beard was right about one thing, ye really do have a lot to learn!”
I was confused. “Blimey! Isn't that the point of Pirate School?” I asked.
“AYE!” Rotten Tooth roared. “And I'm the teacher, so that means I decide what ye learn and when. And I'll be making sure ye learn all the boring stuff first. And I'll also be sure to give ye so much homework that I won't have to hear a peep out of any of you!”
Boring stuff? Homework? Pirate School wasn't sounding like so much fun anymore.

Chapter 3
Knot So Much Fun!
Inna stretched out her arms. Then she picked up the rope with only the tips of her fingers. “Eww! This rope is all slippery and slimy,” she said.
“Aye, and it looks like a snake, too!” Gary said.
“YUCK!” Inna screamed and dropped the rope back on the deck. Then she gave Gary a mean look. “Why did you have to bring up snakes? I hate snakes!”
Gary covered his mouth with both hands. “Sorry.”
“Arrr! Don't be such a scallywag! It's just a silly rope,” Aaron said. “And the sooner we learn how to tie all those knots, the sooner we'll be able to join in the battle.” Then he picked up the rope with both hands. He started swinging it around, pretending to fight off the crew of the
Filthy Sails
.
“Scallywag yourself!” Inna shouted. “Besides, there might not even be a battle. And even if there is, we just have to feed them your sea slug cereal and they'll run off on their own.”
Vicky spun around. She folded her arms and lifted her chin high in the air. “Arrr! What's wrong with our sea slug cereal?” she asked.
“Everything's wrong with it!” Inna yelled. “It tastes like someone already ate it once, and it smells that way, too!”
Vicky put her hands on her hips and huffed. “Aye? Well it's better than those fish eggs you made us eat that one time!”
“Those fish eggs are called
caviar
,” Inna hollered.
“Well I call them icky sticky, so there!” Vicky hollered right back.
I didn't like all my best mates being so grumpy. I took off my pirate hat and waved it around to get their attention. “Blimey! What's ruffled your sails?” I asked.
They all stopped to look at me.
“KNOTS!” they yelled, except Gary, who sneezed instead.
After Rotten Tooth had shown us how to tie a few knots, he had left. He had told us we had to practice knot tying for the whole entire day. Plus he had said we wouldn't learn anything else until we mastered all three knots he'd taught us. He'd shown us how to tie a Fisherman's Bend knot, a Bowline knot, and even a Sheepshank Man-o'-War knot. And that's the hardest knot there is!
“What's wrong with tying knots?” I asked.
“It's boring!” Vicky shouted.
“And slimy!” Inna added.
“And it's not swashbuckling,” Aaron yelled.
“Aye! And it makes my feet all tied up,” Gary mumbled, looking down at where his feet were tangled in the rope.
“But tying knots is an important part of sailing,” I said. “And everyone knows pirates are the best sailors on the sea. If we're going to be the best pirates, we need to learn all of these knots.” 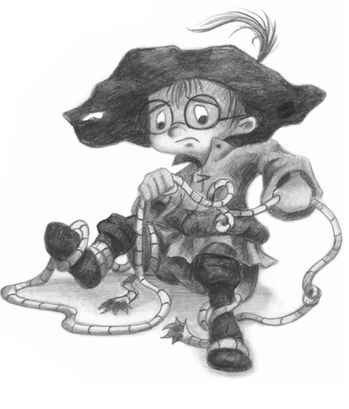 Inna put her finger up to her mouth. Gary scratched his head. Aaron and Vicky squinted their eyes. I knew what those looks meant. It meant they were all thinking very hard.
“Pete might be right,” Vicky finally said. “Knots hold sails to the mast and keep ships from floating away from the dock.”
“Oh, barnacles!” Aaron moaned. “Any knot can do that. Why do we have learn so many different kinds?”
“Not any knot,” Vicky argued. “Remember on our last ship when you made a bunny-ears knot to tie our dinghy to the pier?”
Aaron's cheeks turned red. He had a guilty look on his face. “Um . . . maybe,” he said.
“Arrr! I remember! Our boat floated away, and we had to swim after it!” Vicky shouted.
Aaron put his head down. “Oh yeah, I remember.”
“I know!” I said excitedly. I had a plan. “We'll do such a good job doing this that Rotten Face will have no choice but to let us help defend the ship!”
My friends thought some more.
“Aye aye!” Vicky, Gary, and Aaron agreed.
Inna wasn't so sure. The rope still looked like a soggy snake.
“I've got an idea!” I said. “You can practice your knots with the ribbon from your dress.”
Inna smiled. “Aye! I can. And my ribbon's not even gross because it's the prettiest one I have.”
“That's the spirit, matey!” I said.
Then we all formed a circle. We put our hands in the center and gave our pirate cheer. “SWASHBUCKLING, SAILING, FINDING TREASURE, TOO. BECOMING PIRATES IS WHAT WE WANT TO DO!” 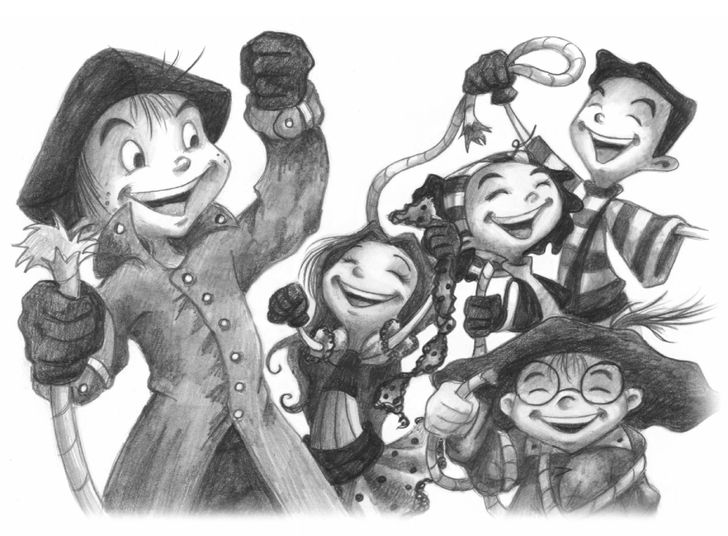 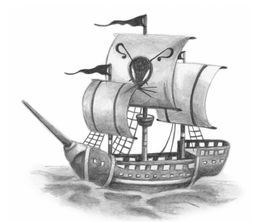 Chapter 4
Tangled Up Forever!
“Arrr! This Sheepshank Man-o'-War knot is impossible!” I said to my friends.
We were all able to finish the first two knots, even Gary. But none of us was able to do the last one. There were too many loops and twists.
I tried it a thousand times. I wasn't sure it was exactly a thousand. I lost count, but one thousand sounded about right.
ADS
15.4Mb size Format: txt, pdf, ePub

Dark Place to Hide by A J Waines
Serial by John Lutz
Me and My Hittas by Tranay Adams
The Freedom Maze by Delia Sherman
Savannah Past Midnight by Christine Edwards
This Present Darkness by Peretti, Frank
The House That Death Built by Michaelbrent Collings
Wanderlust by Danielle Steel
1993 - The Blue Afternoon by William Boyd, Prefers to remain anonymous
Six Sagas of Adventure by Ben Waggoner (trans)