BOOK: Attack on the High Seas!
>>DOWNLOAD HERE >>READ ONLINE NOW
ads
“Aye, we're never going to finish,” Gary said.
“Quit bellyaching!” Aaron said. “It's not that hard. I could do it with my eyes closed.”
“Then how come you haven't done it yet?” Vicky asked him. She didn't like it one bit when Aaron bragged. And Aaron
always
bragged!
“Because I didn't want to,” Aaron answered.
“You mean because you couldn't,” Vicky corrected him.
“I could if I wanted to,” Aaron said.
“Fibber!” Vicky said. “Prove it!”
“Fine! Gangway!” Aaron said, and grabbed the rope. He squinted his eyes and stuck out his tongue. That meant he was trying really hard. It sure was one silly face. I started laughing my head off. “What's so funny?” Aaron asked.
“It looks like you're trying to go to the bathroom.” I giggled. Soon the rest of my friends were laughing, too. But not Aaron. He got a little mad. His face turned red, and he squinted even more. That made us giggle louder. Then he made the last loop and pulled both ends of the rope.
“Ta-da!” he said proudly, and lifted the rope to show us.
Only it wasn't really a
ta-da
, because both of his hands were caught in the rope. That's when we all fell to the deck from laughing so hard.
“Ahoy! You little shipmates seem to be having fun!” a voice boomed behind us. It was Captain Stinky Beard, and he had a big smile on his face.
“Ahoy right back!” I said, and gave him a pirate salute. 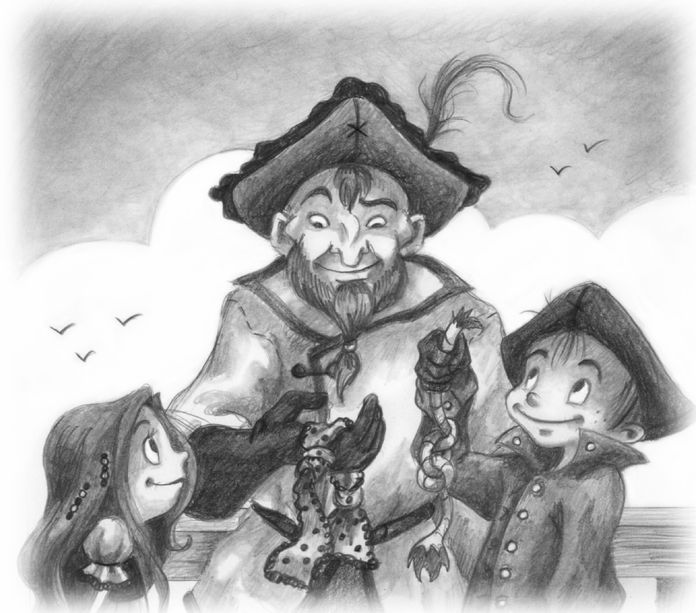 Captain Stinky Beard saluted back. Then he took a look at the knots in our practice rope and the ones in Inna's ribbon. He nodded his head and said, “Ye sailors have been working hard at these. It looks to me like you've done a fine job.”
“Aye?” we asked.
“Aye!” Captain Stinky Beard said.
“But Cap'n? Shouldn't we be helping the rest of crew get ready in case we're attacked?” Vicky asked.
“Aye!” Aaron said. “All this knot tying is a waste of time!”
“Arrr! Knot tying is very, very important,” Captain Stinky Beard told us.
I smiled. “That's what I said,” I whispered to my friends.
“Besides,” the captain added, “there's been no sign of the
Filthy Sails
all day! They must've heard about our brave little pirates.”
“Aye!” we said proudly. We were all smiling, too, because as much as pirates like adventure, no pirate likes to be attacked. But our smiles disappeared when Captain Stinky Beard looked at our practice ropes again and frowned.
“Are these supposed to be Sheepshank Man-o'-War knots?” he asked.
We put our heads down and nodded. They didn't look much like knots. They looked more like messes. We thought the captain would be disappointed. But when I peeked up, he didn't look disappointed.
“Hmm, not bad,” he said. “Rotten Tooth must have a lot of faith in ye mates to teach you such a hard knot.”
“Aye, Cap'n!” Rotten Tooth bellowed. It was the end of the day, and he was coming back to check on us. He put one of his big hands on my shoulder and the other on Inna's. Then he smiled real wide. “I got a whole ocean of faith in 'em!” he said.
I looked over at Aaron and rolled my eyes.
Aaron rolled his, too.
Rotten Tooth was always pretending he liked us in front of the captain. But as soon as Captain Stinky Beard left, so did Rotten Tooth's smile. He leaned in real close to us. We had to hold our noses because of his stinky breath. “Arrr! I got faith that ye will never, ever figure it out!”
I folded my arms and stomped my foot. “Arrr! We'll figure it out,” I told him.
Rotten Tooth roared with laughter. “Mayhaps, me little buckoes. But it took me two years to learn how to tie and untie that knot,” he said, holding up five fingers.
“TWO YEARS!” we all yelled at once.
Two years was forever. I was already nine and three-quarters years old. In two years, I'd be way into my tens! I couldn't waste all that time learning one knot.
“How are we ever supposed to learn anything new?” I asked.
Rotten Tooth scratched the two pointy ends of his beard. “Arrr, I suppose ye better keep practicing for homework.”
We all groaned as Rotten Tooth cut each of us a small piece of rope to take belowdecks. But I wasn't going to let Rotten Head stop me from being a real pirate. I'd show him! Even if it took all night, I was going to learn the Sheepshank Man-o'-War!

Chapter 5
Ships Ahoy!
The next morning, I was sitting on my bunk as the sun was waking up. The ship was quiet except for Inna's snoring and Gary's sleepy sniffling. Aaron and Vicky were asleep in their bunks, too.
They were all tuckered out from doing homework the night before. We had practiced and practiced until our fingers were sore. But still, not even one of us had been able to get that knot to tie the right way.
I didn't want to spend another day working on it. So I reached under my pillow and took out my practice rope. I made four loops like Rotten Tooth had shown us. That was the easy part. Then came the hard part. I had to pull the center loops back through the other loops and turn them from front to back. It made my brain dizzy just thinking about it. And when I was done, my finger was caught in one of the loops. I had to start all over again.
I made a growly noise.
“Knots are not fun,” I mumbled.
I made four more loops and was about to try the twisty-turning thing when I saw something out of the porthole. It looked like it might be another ship. Maybe the
Filthy Sails
was coming for us after all.
I pressed my face up to the glass and took a longer peek. I didn't see anything.
I peeked to the front side.
Then I peeked to the back side.
I only saw waves. It must have been my imagination.
When I peeked at my lap side, I couldn't believe what I saw! While I was doing all that peeking, I'd tied a perfect Sheepshank Man-o'-War knot! I forgot all about the ship I thought I saw. 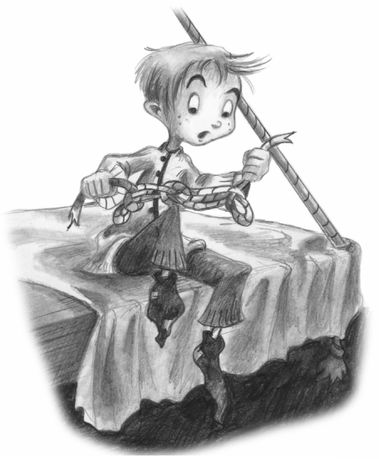 “Avast! I did it! I did it!” I shouted.
Vicky woke up first. She sat up on her bunk and rubbed her eyes. I held up my rope for her to see. Then Vicky started clapping and shouting, too. “Pete did it! He did it!” she yelled and banged on the bunk above her where Aaron was still sleeping.
Aaron sat up. “Arrr! I told you it wasn't impossible,” he said.
Vicky didn't answer him. She just stuck her tongue out instead. Then she got up and raced over to my bunk. Gary's bunk was under mine. Vicky had to step on his to climb up. By accident, she stepped on his hand. Gary woke up.
“Good morning, sleepyhead,” Vicky said.
“Aye-aye-AH-CHOO!” Gary said back.
I poked my head over the side and showed him my knot.
“Blimey!” he said. “Good job, Pete!”
“Thanks, matey!” I said.
Finally, Inna pulled back the pink curtain around her bed. “What's all the racket? I'm trying to get my beauty sleep,” she said.
But when I told her what I'd done, she wasn't grumpy anymore.
She gave me a thumbs-up. “Maybe now you can show all of us?” she asked.
“Aye! Rotten Tooth showed us too fast. You could show us in slower motion,” Vicky said.
I made my face into a pout. Then I scratched my head. “Aye. I wish I could. But I was looking out the window when I tied it,” I told them. “I'm not sure I could show myself.”
“Why in the name of the
Sea Rat
would you be looking out the window?” Vicky asked.
“Aye. You're the one who says we need to pay attention when it comes to important stuff like homework,” Inna said.
“Aye aye. But my brain was all dizzy, and I thought I saw a ship,” I said.
“Arrr! You mean like that ship?” Gary said, pointing out to sea.
I spun around. Outside the porthole was a ship. And not just any ship, it was another pirate ship. “Sink me!” I said. “It's the
Filthy Sails
!”
My friends all made a really loud triple gulp!
“We need to get on deck and help the crew!” I shouted.
“Aye!” Aaron agreed. “We'll teach Fish Face not to attack our ship.”
“Aye aye!” Inna, Vicky, and Gary said. 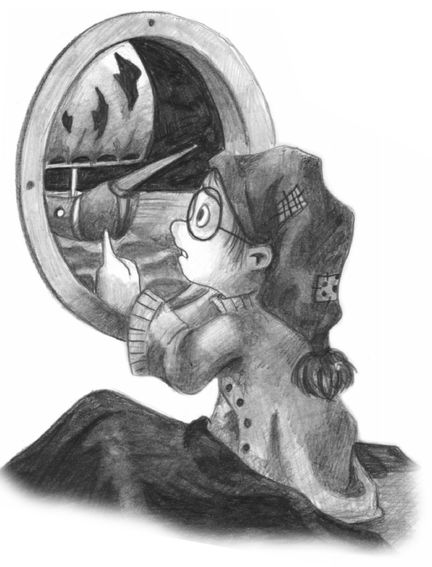 We were just about to run out of our room when Rotten Tooth came in. “Arrr! Where do ye pollywogs think you're going?” he asked.
“To show those mean pirates who the boss of the sea is, that's where!” Aaron answered.
“Arrr! A high seas attack is no place for kiddies,” Rotten Tooth growled. “Ye'll weigh anchor here and work on your lesson.”
“But Pete already did,” Inna said. She held up my rope and waved it in front of Rotten Tooth.
“ARRR! Then practice untying it and re-tying it! And that's an order!” he yelled, and slammed the door.
We all moaned and grumbled. But orders were orders even if they weren't fair! It was the first battle since we'd come to Pirate School, and we were all marooned in our quarters. 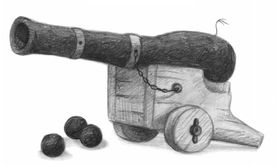 A Golden Age by Tahmima Anam
Lost in the Jungle by Yossi Ghinsberg
Doomsday Warrior 13 - American Paradise by Ryder Stacy
Murder Most Fowl by Edith Maxwell
Angel In The Rain (Western Historical Romance) by Matthews, Devon
To the Brink and Back: India’s 1991 Story by Jairam Ramesh
The Philadelphia Quarry by Howard Owen
The Tycoon's Red Hot Marriage Merger by Christine Glover
A Forest of Wolves by Chelsea Luna
Capture of a Heart by Mya Lairis