BOOK: Attack on the High Seas!
>>DOWNLOAD HERE >>READ ONLINE NOW
ads
“Maybe someone else should do it,” Inna said.
“Aye! Someone who isn't addled in the head,” Vicky agreed.
Aaron crossed his arms. “I can do it. I'll prove it,” he said.
I held up my hands. I had to stop him. They'd turn him into shark bait for sure. “Um . . . we need you to help untie the crew. You're the best at untying knots,” I fibbed.
“Aye? I am, aren't I?” Aaron said. He held his chin up high. “Okay, I'll help.”
I wiped my forehead. That was a close one. And for once, I didn't mind Aaron thinking he was the best at everything.
Gary tapped me on the shoulder. “Pete, I'm not very good at untying knots. But I'm very, very good at distractions,” he said.
Vicky rubbed her forehead. “Aye, you can say that again,” she said.
“Good! While Gary's doing that, we'll sneak around and free Rotten Tooth,” Inna said.
“Rotten Face!” Aaron moaned. “Why do you want to free him?”
“Because he's the best pirate on the ship, whether we like him or not,” Inna said.
“Aye, Inna's right!” I agreed.
Then we all put our hands together and whispered our pirate cheer:
“Swashbuckling, sailing, finding treasure, too. Becoming pirates is what we want to do!”
I gave Gary a little nudge. “It's time to set sail,” I said.
“Aye,” Gary said. Then he started crawling to the other end of the deck. He hid behind barrels and crates until he made it all the way without anyone seeing him.
“How are we going to know when he's distracting them?” Vicky asked.
But I didn't even have to answer. Because just then, we heard a loud
AH-CHOO
! All the pirates turned around to see where the noise came from. Then there was a big, giant
CRASH
as Gary tripped over a rope and knocked down a bunch of barrels. 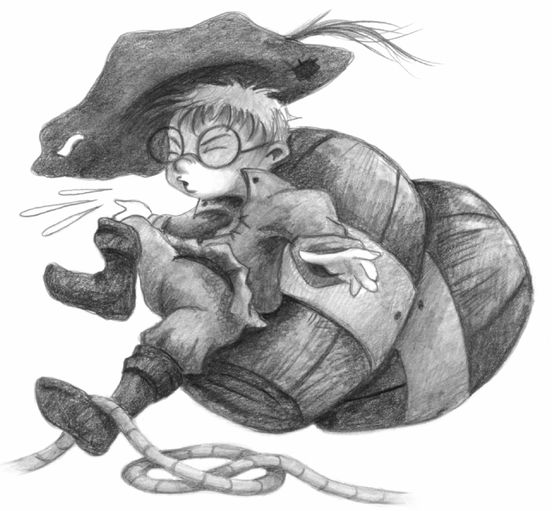 “That's how!” I said. “Let's go!”
With all the pirates distracted, we rushed over to where Rotten Tooth was tied up with the rest of the crew. “Arrr! I'm glad to see you sea pups!” he said.
“Aye?” we asked.
“Aye!” Rotten Tooth said. “Untie me so we can send Cap'n Fish Face swimming back to where he came from.”
“Aye aye!” I said with a big smile. For once, Rotten Tooth was treating us like real pirates.
I hurried behind the mast. I saw the rope and found where it was tied. My mouth fell open. My eyes went all wide. “Oh no!” I told my mates. “It's a Sheepshank Man-o'-War knot!”
We all gulped! Even Rotten Tooth!
I squinted my eyes and stuck out my tongue. I was going to try my best. I just hoped all that homework was worth it.

Chapter 9
Pirate Overboard!
“Hurry, Pete!” Vicky said.
“Aye! Cap'n Fish Face has Gary!” Inna said.
“Aye, and it looks like he's going to make him walk the plank,” Aaron said.
Everyone was counting on me. But no matter how I pushed or pulled, I couldn't get the knot to budge.
“Shiver me timbers, what's taking so long! Can't ye rats just chew through the rope?” Rotten Tooth growled.
Inna held her stomach and gagged. “Yuck! That slimy rope probably tastes even worse than sea slugs.”
Vicky made a grumpy face. “Well it probably tastes better than icky sticky fish eggs,” she huffed.
Aaron interrupted their bickering. He leaned in between them and rolled his eyes at Rotten Tooth. “Arrr! We wouldn't have to chew it if Rotten Head let us have swords,” he said. “We could just cut the rope.”
I didn't say anything.
I took a deep breath. Then I tried the knot again.
I wasn't going to let those mean pirates make Gary walk the plank. He was my best bunkmate! 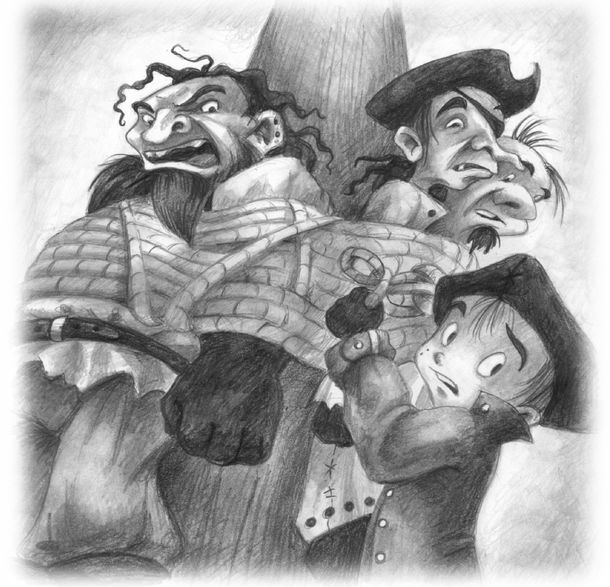 I tried to remember what Rotten Tooth had shown us. There was a special trick to it. I had to take one loop and pull it while I pushed another. I just couldn't remember which ones. So I tried all of them.
I twisted and turned and pushed and pulled. Then I pulled and pushed and turned and twisted. And after a little more twisting, the knot started to get loose.
“That's it! You almost got it,” Inna said hopefully.
“Aye, almost,” I said. I still needed to push and pull some more.
“AVAST! Tiny intruders!” one of the pirates from the
Filthy Sails
shouted out.
We'd been spotted!
“Cast that wee one overboard and stop the others!” Captain Fish Face shouted.
I worked faster and the rope got looser and looser.
“Avast! You did it,” Vicky said as the crew members of the
Sea Rat
wiggled free.
“Aye, and just in time, too,” I said. Gary was standing on the tippy edge of the plank.
“Don't worry, I'll take care of that,” Rotten Tooth said. He leaped up and made a loud roar. Then he rushed off to save Gary.
The pirates from the
Filthy Sails
were no match for Rotten Tooth. I saw him grab three of them at once and toss them overboard. Then he grabbed two more and tossed them right with the others.
Soon our shipmates were all tossing pirates overboard.
In no time, Captain Fish Face was the only mean pirate left onboard. He found himself face-to-face with Captain Stinky Beard. “I'll teach you to attack my ship,” Captain Stinky Beard said.
“Aye! You show 'em, Cap'n!” we cheered.
Captain Fish Face started to back up to the plank.
That's when I saw that Gary was still standing there. I waved my pirate hat in the air to get his attention. “Ahoy, Gary!” I shouted. “Over here!”
But I was too late! 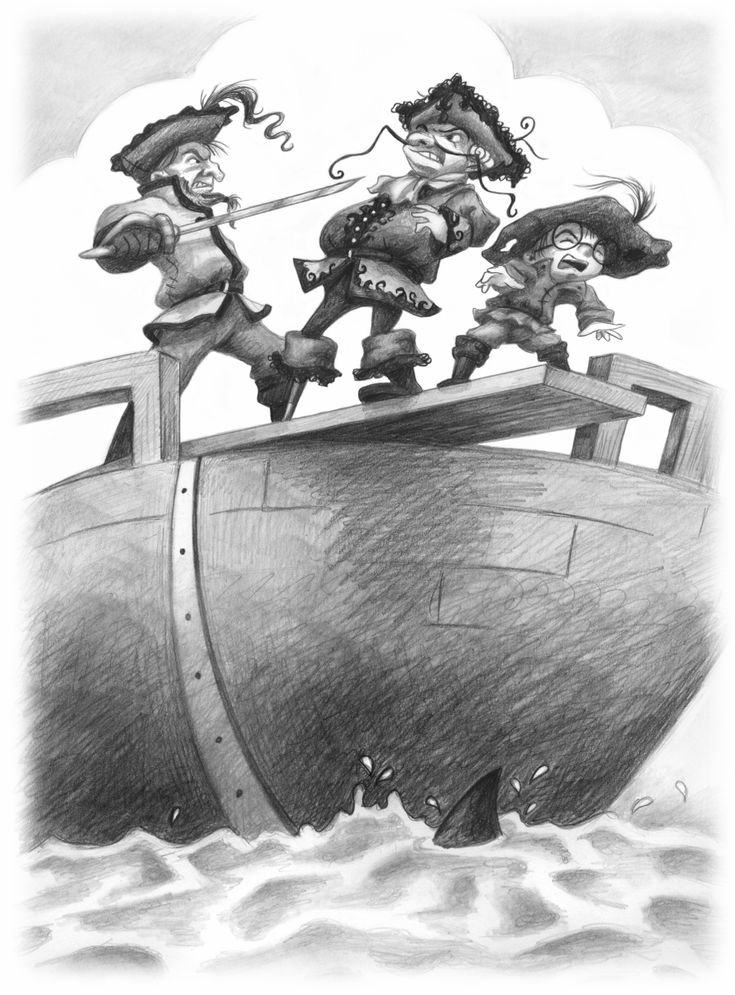 Captain Fish Face stood in Gary's way. “Arrr! Back off or I'll take this lil' shipmate with me!” he said to Captain Stinky Beard. It looked like Gary was doomed.
Inna covered up her eyes with her hands. “I can't watch,” she said.
“Me neither,” Vicky said, and turned away.
“Arrr! We need to save him,” Aaron shouted.
I didn't say anything. I saw Gary's nose twitching, and his glasses started to slide down. I knew right away that Gary was going to save himself.
“AH-AH-AH-CHOOOOO!” Gary sneezed. He sneezed so hard that he lost his balance and slipped. He slipped right into Captain Fish Face!
Captain Fish Face wibbled and wobbled.
Then
SPLASH
!
Gary had knocked him right off the plank! I guess sometimes it's pretty lucky to be as clumsy as Gary is. 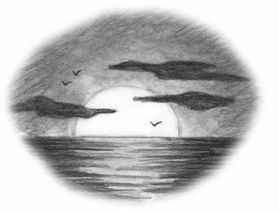 Chapter 10
Pirates at Last
“All hands man the sails,” Captain Stinky Beard ordered.
The crew hurried to the mast and raised the sails. The
Sea Rat
began to creak as it gained speed. We were sailing away to safety as the soggy pirates from the
Filthy Sails
climbed back aboard their ship and headed in the other direction.
I rushed over to Gary. He stood up slowly and rubbed his head. “Did I do something wrong?” he asked once he fixed his glasses and saw everyone staring at him.
“Did you do something wrong?” I said in amazement. “Great sails! You saved the ship!”
“Aye?” Gary asked.
“AYE!” the entire crew of the
Sea Rat
shouted.
Aaron, Vicky, Inna, and I picked Gary up and put him on our shoulders. Then we carried him around the deck as the crew clapped and danced. “Three cheers for our shipmate!” we yelled.
“HIP! HIP! HOORAY!” the crew sang.
Captain Stinky Beard came over to us. We put Gary down and formed a line. I was about to give the captain a salute, but before I could . . .
he gave us a salute!
That made us smile really, really, really wide.
“Ye brave little pirates did a fine job,” Captain Stinky Beard told us. I was so happy, I wanted to sing a sea shanty, but then Captain Stinky Beard turned to Rotten Tooth. “And ye, me first mate, have done a great job, too! Not only did you fight off those pesky pirates, but your shipshape teaching saved the day!”
“Arrr! Just doing me duty,” Rotten Tooth said with a smile. 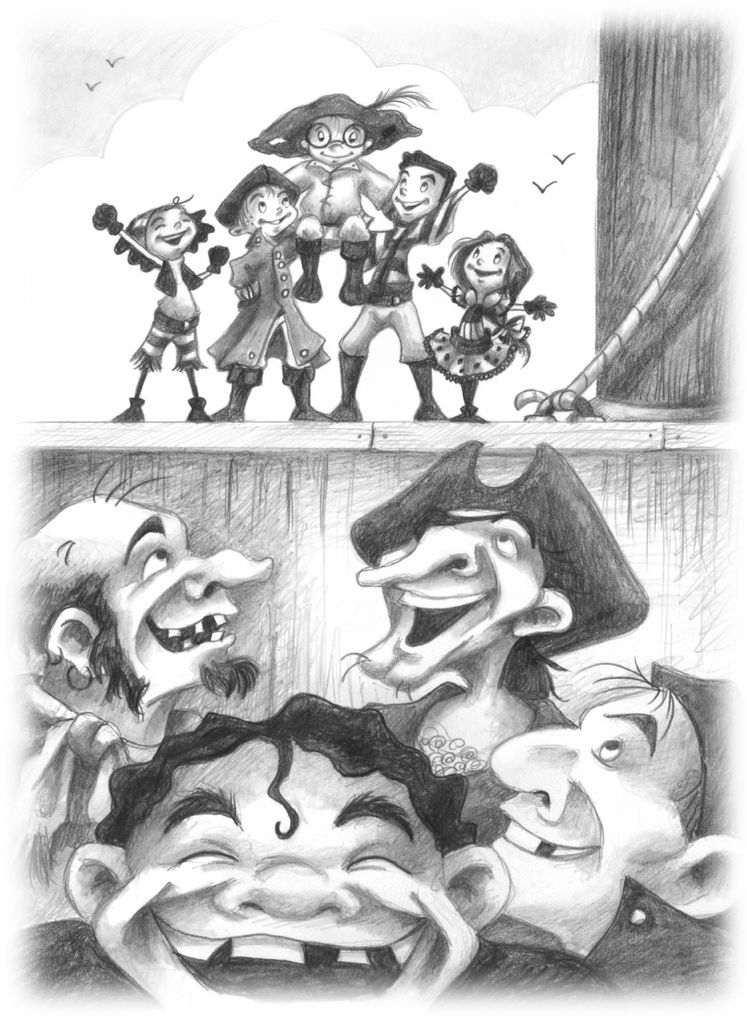