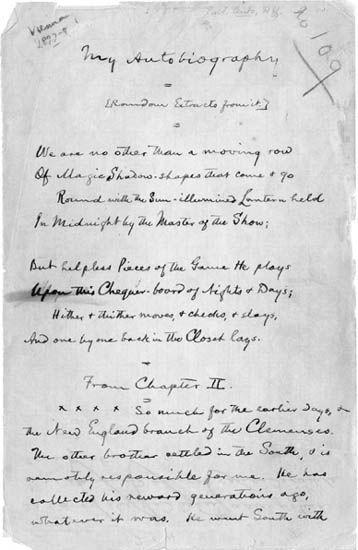 FIGURE 1
. The first page of the manuscript of “My Autobiography [Random Extracts from It].” Clemens deleted the epigraph shown here—two stanzas from
The Rubáiyát of Omar Khayyám
—and “From Chapter II” when revising the forty-four-page typescript (now lost) that was made from the manuscript; they are therefore omitted from the present text. Two notes at the top were written by Paine: “Vienna | 1897–8” and “no 109” (a filing designation). Rosamond Chapman, DeVoto’s assistant, wrote “Publ.
Auto
, 81ff”—where Paine published the text.

Clemens’s unsettled attitude toward his “unfinished” autobiography is clear, but not readily explained. On 10 October 1898, even as he was preparing “My Debut” for magazine publication, he told Edward Bok, editor of the
Ladies’ Home Journal
,

A good deal of the Autobiography is written, but I never work on it except when a reminiscence of some kind crops up in a strong way & in a manner forces me; so it is years too early yet to think of publishing—except now & then at long intervals a single chapter, maybe. I intend to do that, someday. But it would not answer for your Magazine. Indeed a good deal of it is written in too independent a fashion for a magazine. One may publish a
book
& print whatever his family shall approve & allow to pass, but it is the Public that edit a Magazine, & so by the sheer necessities of the case a magazine’s liberties are rather limited. For instance: a few days ago I wrote Chapter XIV—“My Debut as a Literary Person”—my wife edited it, approved it (with enthusiasm—this is unusual), & said send it to you & retire the “Platonic Sweetheart.” It was a good idea, & I said I would. But on my way to the village postoffice with it I remembered that it contained a sentence of nine words which you would have to drive a blue pencil through—so that blocked that scheme.
39

A month later, in a more ambitious frame of mind, he wrote to Rogers that he now planned to “take up my uncompleted Autobiography & finish it, & let Bliss and Chatto each make $15,000 out of it for me next fall (as they did with the Equator-book).” But almost immediately he changed his mind about the need for money, and concluded that he would “never write the Autobiography till I’m in a hole. It is best for me to
be
in a hole sometimes, I reckon.” Then, just a few days later, he wrote again to Rogers: “I have resumed my Autobiography, and I suppose I shall have Vol. 1 done by spring time.
I hope so
I expect so.” And at last, in February 1899, still trying to find a magazine publisher for “My Debut,” he told
Century
editor Richard Watson Gilder: “I have abandoned my Autobiography, & am not going to finish it; but I took a reminiscent chapter out of it
some time ago & & had it copyrighted
& had it type-written, thinking it would make a readable magazine article.”
40
So within the span of a few months he claimed that a “good deal” of the autobiography was written; that he would never finish it until he was “in a hole”; that he expected to have the first volume “done by spring time”; and that he had “abandoned” it altogether. He was obviously struggling with how, or even whether, to proceed with a work that had been in and out of the pigeonhole for twenty years.

It is difficult to be entirely sure, but Clemens seems to have become discouraged at least in part over his inability to be completely frank and self-revealing, after the fashion of Rousseau and Casanova. His solution was, at least temporarily, to recast the autobiography as a series of
thumbnail biographies of people he had met over the years. Several autobiographical manuscripts written in Vienna—“Horace Greeley,” “Lecture-Times,” and “Ralph Keeler”—are character sketches that were part of this reconception, one that he also relied on to some extent in 1904. The Vienna portraits recall men and women whom he knew in his days on the lyceum circuit in the early 1870s. The new plan probably owed something to the idea of a lecture he wrote back then called “Reminiscences of Some un-Commonplace Characters I Have Chanced to Meet.” He delivered this lecture, which he said covered his “whole acquaintance—kings, humorists, lunatics, idiots & all,” only twice. No text of it is known to survive, but in Vienna he evidently resurrected its premise.
41
In an interview for the London
Times
in May 1899 the reporter explained:

Mr. Clemens has kindly given me permission to telegraph to
The Times
some particulars of a pet scheme of his to which he has already devoted a great deal of his time and which will occupy a great part of the remainder of his life. In some respects it will be unparalleled in the history of literature. It is a bequest to posterity, in which none of those now living and comparatively few of their grandchildren even will have any part or share. This is a work which is only to be published 100 years after his death as a portrait gallery of contemporaries with whom he has come into personal contact. These are drawn solely for his own pleasure in the work, and with the single object of telling the truth, the whole truth and nothing but the truth, without malice, and to serve no grudge, but, at the same time, without respect of persons or social conventions, institutions, or pruderies of any kind.

Clemens even spelled out exactly why he had abandoned his original plan for an autobiography: “You cannot lay bare your private soul and look at it. You are too much ashamed of yourself. It is too disgusting. For that reason I confine myself to drawing the portraits of others.” And in an interview after he returned to London, he said again that the new idea had actually supplanted his earlier ideas for the autobiography:

I’m not going to write autobiography. The man has yet to be born who could write the truth about himself. Autobiography is always interesting, but howsoever true its facts may be, its interpretation of them must be taken with a great deal of allowance. In the innumerable biographies I am writing many persons are represented who are not famous today, but who may be some day.
42

If this switch to biographical portraits signaled frustration over the puzzle of how to tell even the shameful truths, his interest in it was still relatively brief. We have no indication that he wrote any further portraits until 1904, and by 1906 the character-sketch idea had fallen entirely out of favor. For about a year Clemens seems not to have added anything to his accumulation of autobiographical “chapters.” In the fall of 1899 he moved his family to London, and for about a year seems to have taken leave of the autobiography.

Clemens’s use of the terms “Scraps” and “Extracts” (as well as “Random”) in 1897–98 suggests that he was looking for a way to label “chapters” which, while not themselves strictly chronological, might still have been parts of some coherent narrative sequence. In the fall of 1900 he used the term “Scraps” in the titles of three more sketches for the autobiography: “Travel-Scraps II,” “Scraps from My Autobiography. Private History of a Manuscript That Came to Grief,” and “Scraps from My Autobiography. From Chapter IX.” Only one of these made it into the final form: “Travel-Scraps II” continued the 1897 recital of grievances about London’s telephones and postal system and was ultimately inserted in the Autobiographical Dictation for 27 February 1907. “Scraps from My Autobiography. Private History of a Manuscript That Came to Grief” was much longer. It concerned a recent experience with T. Douglas Murray, an amateur historian, who had invited Clemens to write an introduction for an English translation of Joan of Arc’s trial records. Clemens submitted his draft, and wrote Murray: “When I send the Introduction, I must get you to do two things for me—knock the lies out of it & purify the grammar (which I think stinks, in one place.)”
43
Murray took this invitation all too literally and proceeded to revise the text extensively, making the language more formal, even pretentious. Enraged by this tampering, Clemens proceeded to draft a reply in the shape of a scathing letter to Murray, which of course he never sent, preparing it instead for the autobiography.
44
The third manuscript, also excluded from the final form, nevertheless illustrates a rather different dynamic, namely the persistent reluctance or inability to break entirely free from the chronological structure of conventional autobiography. The manuscript was titled (as revised) “
Selections
^
Scraps
^
from my Autobiography.
Passages

rom Chapter IX.” Paine thought it was written “about 1898” but it was in fact written in 1900, as one reference in the text makes clear. The assignment of a chapter number is something that it shares with only a handful of other manuscripts, summarized in the following list.

Although some additional numbered chapters may have been written and subsequently lost or destroyed, it is highly unlikely that in 1903, when Clemens labeled a text “Chapter XVII,” he had actually written seventeen chapters. But the numbers assigned to the chapters that do survive correspond roughly to the chronology of their topics, even though they do not accurately reflect the lapse of time: Clemens was fourteen in both Chapter IV and Chapter IX, but between Chapter IX and Chapter XIV he aged from fourteen to thirty, and then to age sixty-two by Chapter XVII. Still, this rough approximation is exactly what one would expect if the chapter numbers were only
estimates
, intended to place the chapters in approximate chronological order. Together they again suggest that although he was not writing about his life in the order of its occurrences, he was still trying to maintain an overall chronology, even as late as 1903.

The text numbered “Chapter IX” (“Scraps from My Autobiography,” written in 1900) is suggestive in a related way. The chapter number would place it relatively early in his life. It recounts two stories from Clemens’s youth, when he was fourteen (1849–50), but it concludes each story with much later events—the first in Calcutta in 1896 when he was sixty-one, and the second in London in 1873 when he was thirty-eight. In both cases it seems that to follow the stories to what Clemens regarded as their natural conclusion, it was necessary to skip over several decades of his life. So whatever else “Chapter IX” was in 1900, it was not a purely chronological account—even though the chapter number placed it toward the beginning of the narrative.

Smashed: Story of a Drunken Girlhood by Koren Zailckas
Biker Justice: A Skull Kings MC Novella by Sage L. Morgan
Stolen Moments by Radclyffe
Trouble in the Tarot by Kari Lee Townsend
Behind the Veils of Yemen by Audra Grace Shelby
Mist & Whispers by C.M. Lucas
The Villa Triste by Lucretia Grindle
In the Hands of a Chef by Jody Adams
Petite Mort by Beatrice Hitchman
G.T. Herren - Paige Tourneur 01 - Fashion Victim by G.T. Herren