Read Beside a Dreamswept Sea Online 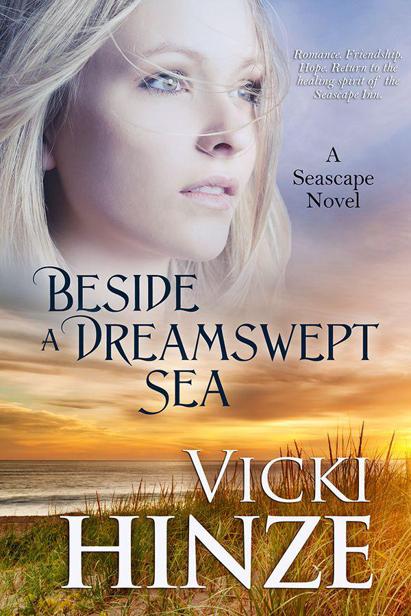 “[Hinze] does a good job of developing characters to whom the reader can relate. For readers who like their romances family-centered with lots of secondary characters.”

Shades of Gray, Acts of Honor, and All Due Respect

Book three in the
Seascape
Series

To Mom and Dad,

Who exhibited the ultimate love in sacrificing to save me.

Thank you for the privilege of being your daughter.

With all my love and gratitude,

The child was going to drown.

The truth slammed into Tony Freeport with the force of a sledge. A stunning truth, considering she lay tucked safely in bed in the Shell Room of Seascape Inn and, in his fifty years as a ghost working with his beloved Hattie in assisting others here to heal, he’d never before seen anyone come to harm under the inn’s roof. But in Suzie Richards’s dream, all the signs of real-life drowning were evident: panic, an inability to breathe, and fear. So much fear . . .

Dream or reality, if Tony didn’t do something quickly, the nine-year-old daughter of Bryce Richards and the deceased photojournalist, Meriam,
was
going to drown.

What could Tony do? What
should
he do? Suzie taking on the burdens of family no child should ever have to carry had been the catalyst insisting he intercede this far. But to intercede into her dreams? Did he dare?

This had to be a near-miss warning. Had to be.

He looked through the closed bedroom door, out into the upstairs hallway. The paneled walls deepened the night’s shadows and the only light was that seeping through the bank of mullioned windows centered inside a small vaulted alcove at the far end of the hall. Tall hand-carved mahogany bookshelves flanked those windows. Tony couldn’t clearly see the books in them, but he didn’t have to see them to know each book’s title, to know each spine stood straight. Nor did he need to see the pillows on the thick cushions of the window seat nestled between those shelves to know they’d been fluffed. Hattie Stillman nurtured everything in her care, which included all of Seascape Inn, most of Sea Haven Village, and, at one time, him.

He scanned the polished plank-wood floor from the far end of the hallway back toward the end where he stood. On the left, facing the Atlantic Ocean, was the master bedroom, dubbed the Great White Room years ago, and the bath. On the right, the L-shaped staircase leading down to the first floor, and the Cove Room where Bryce Richards should have been sleeping but wasn’t. Instead, the man dozed slumped on the hallway floor, his head lolled back against the paneled wall, his slippered foot rumpling the edge of the white Berber rug that stretched from the stairway’s landing nearly all the way down to the Shell Room, about a yard from Tony’s feet.

Bryce was a man on a mission. Two sets of his friends from New Orleans, T.J. and Maggie MacGregor and John and Bess Mystic, had found “magic” at Seascape Inn, and Bryce had come here with doubts but hopes that enough magic remained to grant his daughter peace from the emotional demons haunting her sleep since her mother’s death two years ago. But even in sleep, Bryce was despairing; Tony sensed it. Despairing that, though armed with its angelic innkeeper, Miss Hattie, the charming old inn couldn’t hold
that
much magic and, without it—God knew Bryce had tried everything else—Suzie’s nightmares would be an endless source of her suffering.

And Bryce despaired that she’d dream and, asleep in the Cove Room across the hallway, he’d not hear her cries, not know to come and comfort her. For reasons of his own, he had forsaken sleeping in the comfortable stuffed chair in her room or in the luxury of a soft king-size bed and had chosen to stand guard on the hallway’s oak floor outside her door, listening, waiting, and praying he wouldn’t be needed.

The agony of the situation had broken Tony’s heart, and he’d aided the quiet of the house in lulling the reluctant Bryce to sleep, agreeing with his darling Hattie’s assessment that Bryce was worn to a frazzle. But who wouldn’t be? Worried sick about his three children overall, Suzie and her nightmares in particular; fighting a constant battle of wills with that dour-faced Mrs. Wiggins, whom Bryce’s wife had hired to care for the children when Jeremy had been born four years ago; and then—right on the heels of the narrow-miss divorce between John and Bess Mystic—that blasted Tate divorce case. It was a wonder Bryce Richards was still upright!

In the days since their arrival at Seascape Inn, Hattie had mumbled repeatedly that no more a devoted father than Bryce ever had graced the earth, and Tony wholeheartedly agreed with his beloved on that appraisal, too. Bryce was a fine father, a fine man, and a fine attorney.

Yet that hadn’t spared him from challenges.

As if he hadn’t had enough on his plate already, he’d been tossed a moral dilemma on the Tate divorce case that would have brought even the most avid believer, the most confident man in the world, to his knees. A shame he had represented Gregory Tate. Not only disagreeable, the man had proven himself unscrupulous and coldly calculating. Though the divorce had been granted and the case was behind Bryce now, it had left him weary, his opinion even more jaded about the odds for successful, happy marriages—and it’d left him admittedly curious about the mysterious Mrs. Tate.

So was Tony. He leaned against the doorjamb, propped the toe of his shoe against the floor, then rubbed at his neck. Why had the woman never once appeared in court? Never once attended the attorney/client meetings with Bryce, Gregory, and her own attorney? Her behavior was curious.

Tony grimaced. Now, because he had given Bryce this brief but much-needed respite of sleep, Suzie fought the fiendish nightmare alone. Tony shouldn’t intercede further—dream intervention was expressly forbidden—but she was suffering uncomforted, and that was his fault. He couldn’t deny responsibility and condemn her to this. Hattie would never forgive him. Worse, he’d never forgive himself.

Protocol be damned. Tony shoved away from the wall. Rules and regulations, too. What more could be done to him? Already he lived in the house with his beloved Hattie and yet he couldn’t talk directly with her, couldn’t hold her, couldn’t love her as a man should love a woman—as he
would
have loved her had he been given the chance. What could be more challenging? And a child’s life hung in the balance. Likely her father’s, too—if anything should happen to her.

Theoretically, people didn’t actually die just because they died in their dreams. But what if Suzie did? In Tony’s experience, dreamers
always
had awakened prior to actual dream-state death. So why wasn’t Suzie awakening? Soaring heart rate. Gasping something fierce. She might not drown, but she could have a heart attack. Drowning or a massive coronary, dead was dead.

He tried several tactics to nudge her into awakening.

Having no idea, Tony scowled, feeling inept and agitated. The bottom line was Bryce Richards had little more left to lose. Tony
had
to intercede.

He stepped into Suzie’s nightmare, into a raging storm.

The wind stung, bitingly cold, whistling through crisp brown leaves that had fallen from the poplars and oaks near the shore. Familiar poplars and oaks. Familiar low stone wall running along the rocky ground to the pond. And familiar white wrought-iron bench, north of a familiar, freshly painted gazebo.

Charlotte Stone and the Children of the Nymet by Tasha O'Neill
The Sound of the Trees by Robert Payne Gatewood
I, Judas the 5th Gospel by Bob Mayer
An Instance of the Fingerpost by Iain Pears
The Perimeter by Boland, Shalini
Eternal Captive: Mark of the Vampire by Wright, Laura
Mercury Rises by Robert Kroese
How to Eat a Cupcake by Meg Donohue
The School Revolution by Ron Paul
The Only Ones by Aaron Starmer