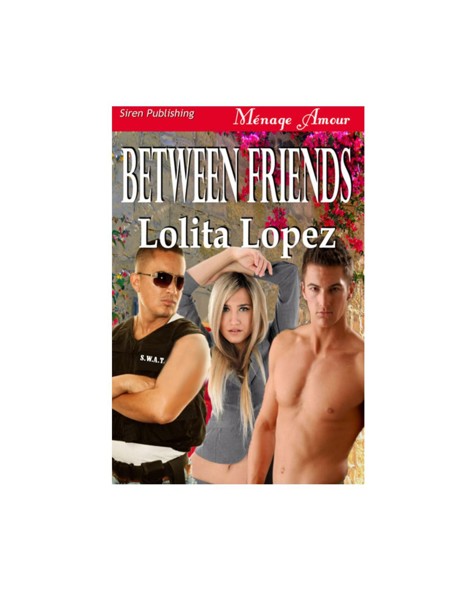 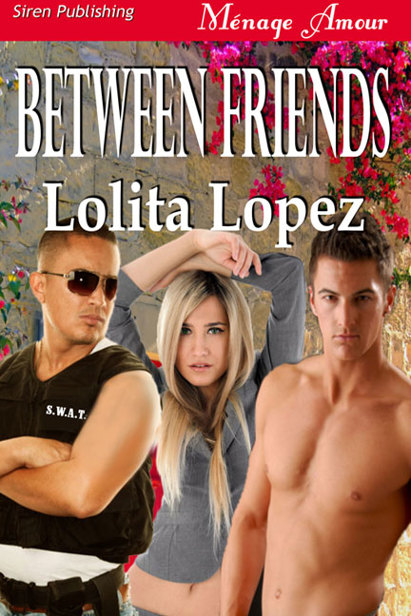 Eddie craves Whitney's touch. Her sweet smile tempts him like none other—and it terrifies him. He's been burned once before and has no desire to relive the pain of rejection. His heart walled off, Eddie denies himself the very thing he wants most.

But Mick is tired of tiptoeing around the obvious sexual attraction between the three of them. He wants Eddie and Whitney in his bed. He's ready to play with fire, even if that means dragging Eddie, kicking and screaming, right through the flames behind him.

All cover art and logo copyright © 2011 by Siren Publishing, Inc.

If you have purchased this copy of
Between Friends
by Lolita Lopez from BookStrand.com or its official distributors, thank you. Also, thank you for not sharing your copy of this book.

This is Lolita Lopez’s livelihood. It’s fair and simple. Please respect Ms. Lopez’s right to earn a living from her work.

“Shit! Eddie, we’re never going to get this finished before Whit gets home.” Mick didn’t bother disguising the distress in his voice as he cast a quick glance at his paint-splattered best friend and sometimes lover.

“Well, standing there bitchin’ about it isn’t going to get this done any faster.” Eddie globbed more paint onto the fuzzy roller. “Need I remind you this wasn’t my idea? I tried to tell you renovating this part of the house in two weeks was impossible, but you wouldn’t listen.”

Not wanting to hear another round of Eddie’s I-told-you-so routine, Mick shot him the finger. “I heard you the first nine times.

But…seriously…what are we going to do?”

“No idea.” Eddie shrugged his bare shoulders. The house was unbearably hot, and the two men had stripped down to shorts to keep cool while working frantically to patch up the nightmare they’d created. With every stroke of the paint roller, the muscles of Eddie’s well-defined back rippled. Apparently those workouts with his fellow SWAT members were paying off in spades.

Mick’s gaze lingered on the tantalizing sight a moment too long.

Mick tore away his appreciative gaze and tried to suppress the wicked images now flickering in his mind. There would be time for that later. Right now, they had a serious problem to tackle.

His stomach soured as he studied the living room and what he could see of the dining room. A long slab of plywood balanced across a pair of sawhorses served as a makeshift worktable and held paint cans and roller covers. Sheets of clear plastic covered the floor, protecting the bamboo planks he’d mistakenly installed before finishing up the painting. He cringed at the memory of Eddie’s delighted guffaws at his amateur move.

Jagged edges of Sheetrock marked what had once been a wall and was now a glaring, gaping hole looking into the dining room. Exposed concrete waited for its new hardwood covering. The boxes of flooring sat stacked in a corner of the dining room with assorted other boxes of renovation supplies. The hardwood planks were the wrong color, of course, and needed to be returned and exchanged.

“Christ, what the hell were we thinking?” Mick rubbed his face and immediately regretted it. He felt the slick smudge of wet paint on his cheeks. “Great. Just fucking great!”

Eddie laughed his deep belly laugh and leaned against the long pole attached to the paint roller. “Sage is a good look for you.”

Mick shot both fingers this time. He blew out a rough breath.

“Whitney is going to flip when she sees this—and not in the way we’d envisioned.”

For months now, their roommate Whitney had been dropping hints about making some changes to the house. Mick and Eddie had resisted. With the plunging real estate values, they were almost upside down on the mortgage. Things were finally settling down, and they’d been able to refinance at a lower fixed rate. The idea of renovating no longer seemed quite so daunting. It was doable so long as they stuck to their budget.

And it would make Whitney happy.

Mick took another look at the mess and wondered when things had gotten so complicated. Had he ever done something so stupid for a woman? Would he have taken on such a project for anyone else?

No. The answer was swift and sure.

Whitney Montcrief was one of a kind. When she’d answered the roommate listing, Mick’s first instinct had been to say no. For starters, she was female, and they’d originally planned to stick with another guy to preserve the all-male dynamic in the house. Throw in her pale blonde hair and those arresting green eyes, and it was a recipe for disaster.

Some days the sexual tension threatened to blow the roof off the place. For twelve months, they’d been tiptoeing around the subject.

Eddie wasn’t the kind to take risks, not after the Miranda fiasco. He liked things simple and straightforward and safe. Mick, on the other hand, enjoyed a little risk, but the thought of crossing that line and hurting Eddie kept his desire at bay. Mick honestly didn’t know if their friendship would survive another Miranda.

So here they were, tearing up their home in the hopes of impressing the woman neither of them were ballsy enough to go after.

“Maybe if we just get the living room finished, she won’t notice the rest.”

Mick’s hopeful tone seemed to amuse Eddie. The corner of his mouth curved in a smile. “Maybe she’ll be so blinded by our wonderful paint job she won’t see this ugly-ass hole where that wall used to be. Yep. Sounds like a plan, Mick.”

Mick gritted his teeth and counted to five. “Look, if we move around the furniture, we can probably block most of the missing wall with the entertainment center. We’ll stash all the construction crap in the dining room and shut the doors.”

Eddie considered his suggestion. “If she’s really tired from her flight that might work tonight. Maybe she’ll just walk by the dining room and not ask any questions, but tomorrow morning?” Eddie shook his shaved head. “We’re fucked. You know she likes to eat her scrambled eggs and toast in the dining room while she checks her blogs and newspapers.”

Actually Mick didn’t know that. His shift at the ER started before Eddie or Whit were awake in the mornings. He typically grabbed his breakfast on the way into work and missed that quaint scene of domestic bliss. A small flare of jealousy irritated his already frayed nerves. “So what do you suggest?”

“We work our asses off to get this done or as close to done as possible.” Eddie picked up his paint roller and headed back to the wall. “And hope for the best.”

Mick stared at Eddie for a second and then grudgingly got back to work. There really was no other option.

Together they managed to finish painting the living room and were installing the new ceiling fan when Mick heard the unmistakable sound of an approaching car. Eddie’s paint-stained hands went still.

The screwdriver clamped between his teeth fell to the floor with a noisy clatter. Mick was certain he displayed the same oh-shit expression reflected on Eddie’s face.

Mick hopped off the stepladder and rushed to the window. His stomach dropped like a runaway elevator. “Yeah. In a taxi.”

“We weren’t supposed to pick her up for hours.”

Mick rushed back to the stepladder and snatched up the screwdriver. He climbed up to help Eddie rush the installation of the ceiling fan. Seconds sped by so quickly. Their fingers fumbled and slipped. Eddie cursed a few times before finally securing the base on the ceiling mount and getting the last screw in place. Mick stepped off the ladder a fraction of a moment before the front door swung open.

“What is all that crap in the front yard? It looks like Home Depot exploded on our sidewalk.” Whitney’s confused voice drifted in from the hallway. In a few seconds, she’d come around the corner.

Kiss of Moonlight by Stephanie Julian
The Anderson Tapes by Sanders, Lawrence
SoHo Sins by Richard Vine
A Soldier For Bella (Love Conquers Life #4) by Alison Mello
The Ledbury Lamplighters by Kerry Tombs
The Log From the Sea of Cortez (Penguin Classics) by John Steinbeck
Falling for Bentley (Part One) by Borris, Shawnte
Taken by the Beast by Natasha Knight
The Winter Love by Munday, April
Pretty Wicked by Georgia Le Carre