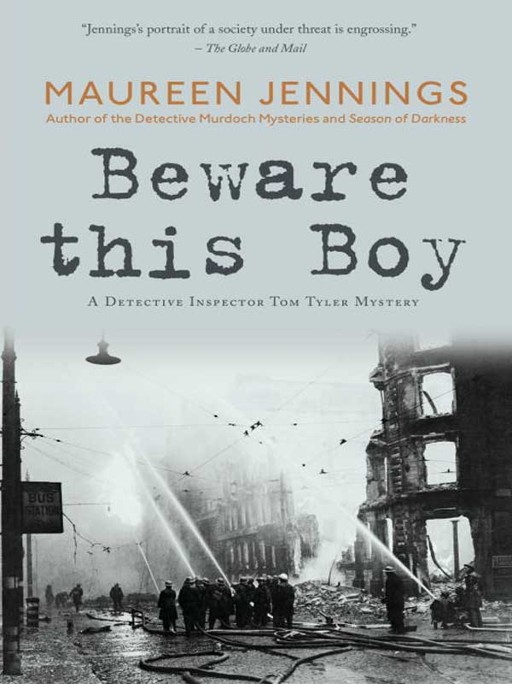 Always for Iden, my best supporter.

Also to my mother, the late Betty Jennings,
who endured it all.

To all those Brummies who went through the bombing
and the war with courage and steadfastness.

He’d waited patiently, knowing everything had been set in motion. There was nothing more for him to do. At six o’clock, he switched on the wireless. A slight crackle, then the announcer’s voice came on
. “This is the
BBC
Home Service. Here is the six o’clock news and this is Alvar Liddell reading it. There was an explosion in a Midlands factory this afternoon. Three fatalities have been reported. Four other workers, two men and two women, were also injured, one of them seriously. However, work is expected to resume within a few days.”

That was enough. The rest of the news didn’t interest him. He turned it off and sat back. “Work is going to resume, is it indeed? We’ll see about that.”

C
HARLES
E
NDICOTT LIKED TO RUN WHAT HE CALLED
a tight ship, and his employees had learned to be punctual. However, when the workers on the afternoon shift, Danger Sections A and B, arrived, they were held up for a good fifteen minutes. The women’s change room was unaccountably locked. The first shift had already cleared out, but the precious transition time allocated to the incoming group was used up while Mrs. Castleford, the supervisor, went off to find a key. The twelve women stood waiting in the drafty entrance hall where the clocking-in machine was located.

“I wish she’d hurry up. I need to go to the toilet,” murmured Sylvia Sumner to the girl standing beside her. Sylvia was the youngest of the group, shy and sweet, new to factory work. She still retained the fresh complexion of a country girl.

“Why don’t you go through and use the men’s,” said the other girl. “Apparently, it’s open.”

“Don’t be such a silly goose. A loo is a loo. What’s the difference?”

“No good asking her,” said another girl.

Tess grinned. “You’d better take her under your wing, Prue, before it’s too late.”

Of all of them, Prue McDermott, with her lush lips and perfectly applied makeup, came closest to being a “woman of the world.” She was also funny and good-hearted, so nobody was overly judgemental about her way of life.

Sylvia ducked her head. She was always being ribbed about being an innocent.

Unexpectedly, Irma Dimble, who rarely laughed these days, joined in the teasing. “She’ll know soon enough.” But she patted Sylvia’s arm affectionately to take away any sting from her words. She knew Sylvia was counting the days until her fiancé would come home and they could get married.

“Speaking of which, you’ll never guess what happened to me on the way here,” said Audrey Sandilands. But before she could tell her story, a flustered Mrs. Castleford reappeared.

“Situation resolved. You can come in. No shoving now, we’re not on a bus.”

The girls surged through the double doors separating the cloakrooms from the main floor. There were already women working at the lathes, and some of them broke into cheers and hoots when they saw them.

“Make sure you don’t claim that on your overtime, McDermott,” one woman called out.

“Shut it,” Prue yelled back.

“What happened, Mrs. Castleford?” asked Sylvia. “What was the delay?”

The magazine-keeper was standing at the change-room door. He threw up his hands. “Don’t ask me,” he said. “I
know
it’s not supposed to be locked. I’ll look into it.”

He opened the door and stood aside to let them in. Prue positioned herself at the threshold as they jostled past. “Tickets, please. Have your tickets ready. Next stop, Hell.”

Audrey nudged Tess and whispered, “Mr. Riley, indeed. No wonder it took so bleeding long to find a key. They had to search
everywhere
.”

They both burst out laughing, drawing another frown of disapproval from the supervisor.

The girls went to the lockers and began to disrobe. The factory provided white cotton turbans, blue overalls, and the special soft leather shoes they had to wear.

“Must have cost a week’s wages,” added Tess. She was the youngest of a large family, and her own style of dress was hand-me-downs. All from a taller, older sister.

“I hope you’re saving them for his eyes only,” said Audrey.

Prue shrugged provocatively. “Some things are too good not to be shared.”

She took her compact from her handbag and handed it to Sylvia. “Hold this for me, there’s a pet. I can’t get a look in edgewise with the ugly sisters over there.”

One of the Section A operatives, a chunky brunette, had stationed herself in front of the small mirror on the wall and was applying her lipstick. Her skin had a yellowish tinge and the front of her hair was bright orange. All the girls who handled the cordite ended up like that.

“I heard that,” she said over her shoulder. “Who’s calling us ugly?”

“Nobody, dearie,” said Prue. “Just an expression.” She checked herself in the compact mirror, pulled out a strand of hair from beneath her white turban, and studied the result. She had only recently transferred from Section A and her normally brown hair was still an orangey yellow. “Draws the blokes,” she whispered to Sylvia, who was watching. “They get hot and bothered at the thought we might be blown to smithereens any moment.”

“Don’t tease the child,” piped up Audrey. “She doesn’t know what you’re talking about.”

“Speaking of smithereens, I still haven’t got over that damn raid on Friday,” interjected Tess. “The worst yet. Our entire family stuck in our Anderson shelter for eleven bloody hours. Eleven hours. Bombs falling all around us. Can you imagine me and my sister together for that long? Christ! I thought it would never be over.”

“Better that than dead,” said Irma Dimble. A recent widow, she knew what she was talking about.

“Quite right, Mrs. Dimble,” said Mrs. Castleford. “Let’s have no more gloomy talk, girls. That won’t win us the war. And no more swearing from you, Miss Deacon, or I’ll dock your wages.” She clapped her hands. “Chop-chop, girls. Let’s not dilly-dally. We have absentees today, which means more work for the rest of you. We don’t want to fall behind, do we.”

“Or on our behinds, for that matter,” said Prue, winking.

“Speaking of which,” said Audrey, as she tied on her turban, “I never got to tell you my story.”

“Never mind that now,” interrupted the supervisor. “Section A ready? All clear?”

“All clear, Mrs. Castleford,” came back the chorus. One by one they hopped over the low barrier into the clean area beyond the lockers and headed for the far door.

“Get down to work right away, you lot,” called Prue. “You’ve kept us waiting lately. Falling asleep, are you? Too many late nights?”

The little brunette, the one who’d been looking in the mirror, cocked a snoot at her behind Mrs. Castleford’s back.

The supervisor turned to the remaining five girls. “Let’s get a move on. Miss Sumner? Mrs. Dimble? Did you remove your rings?”

Althought the
ASA
powder they worked with was so volatile
that anything that could create a spark was a worry, everybody knew how important it was for her to keep her wedding ring on. Mrs. Castleford nodded.

“Just let me see.” She inspected their hands. “Yes, that’s acceptable.” Her glance swivelled over to the others. “Miss McDermott, how many times must I remind you?
All
of your hair must be covered. You have some hanging out.”

The supervisor waved her hands as if she were shooing chickens. “Now then, off we go. Miss Sandilands, I don’t need to check you for cigarettes again, do I?”

“No, you don’t.” Audrey’s voice was demure. She was on warning and she knew she would be fired if she was found a second time with contraband.

“All clear,” the girls chorused.

Just as the others had done, they all stepped over the low barricade. Mrs. Castleford hustled them through the door and into the passageway that connected with their section.

The two danger areas were new additions to the old factory and were strictly practical. Squat and square, they were built of brick painted battleship grey. Official word was that this prevented the Jerry bombers from seeing them in the fog. However, the employees joked that the real reason was Mr. Endicott had got a bargain on grey paint.

“Have you decided whether or not to evacuate the kiddies?” Tess asked Irma as they scurried along. The passageway was roofed but open-sided, and the damp fog had settled in.

Irma shook her head. “I can’t bear to be without them is the truth. Not with Dick gone.”

Tess linked her arm through that of the older woman.

“That’s understandable. You probably should have taken more time off.”

Irma’s husband had been killed at Dunkirk seven months ago, leaving her with two young children.

That same fog followed them as they pushed open the heavy fire doors and entered the section. There were no windows, and the narrow, shed-like building was bathed in the bluish light of mercury lamps. There were two benches, each covered with rubberized linoleum, also grey coloured. Buckets of sand lined the walls.

Two men were working at one of the benches, which had the covering torn up.

“What are you fellows doing here?” demanded Mrs. Castleford. “You know it’s against regulations to be doing repairs when the shift starts.”

“Sorry, ma’am, won’t be much longer,” said the older one. “We had to replace the lino.”

“Well, please hurry. We’re losing far too much time as it is.”

“Yes, we are.” She regarded her charges. “Take your places, girls. Miss McDermott and Miss Sandilands, you can sit with the others until the men have finished.”

The two girls settled themselves onto wooden stools at the adjacent bench.

Mrs. Castleford glanced around. “Where are the carrying boxes? Don’t say there aren’t any fuses ready?”

One of the men indicated a wooden box on the floor between the benches.

“There’s one there. The first shift didn’t quite finish its quota.”

Mrs. Castleford sighed and turned to the girls. “Mr. Riley says there’s a miscount from the morning shift. I really must help him sort out the problem.”

“We can start up by ourselves,” said Audrey.

The supervisor hesitated. “You’re not supposed to.”

She went over to the box, which was about the size of a small suitcase and had rope handles on each end. Both of the workers flicked her an appreciative quick glance. Mrs. Castleford was as plump as a robin but firmly corseted.

Out of Focus (Chosen Paths #2) by L. B. Simmons
The Bloodlust by L. J. Smith
Advent by Treadwell, James
The Seduction of Suzanne by Hart, Amelia
If Truth Be Told: A Monk's Memoir by Om Swami
Casanova by Medina, Edward
Good Guys Love Dogs by Inglath Cooper
Winter's Touch (Immortal Touch Series) by Gail, Allie
The Clay Lion by Jahn, Amalie
The Company You Keep by Tracy Kelleher