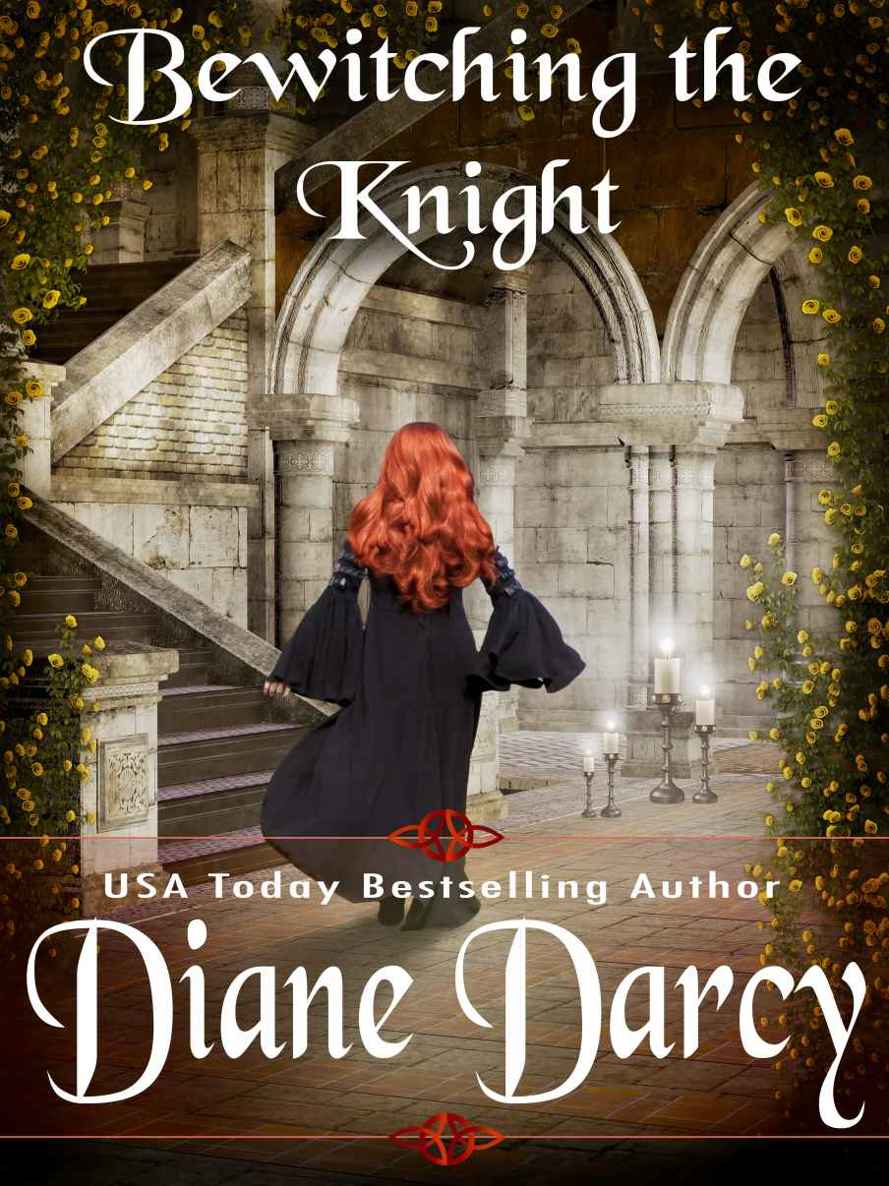 This book is a work of fiction. The names, characters, places, and incidents are products of the writer’s imagination or have been used fictitiously and are not to be construed as real. Any resemblance to persons, living or dead, actual events, locales or organizations is entirely coincidental. All rights reserved. No part of this book may be reproduced, scanned, or distributed in any manner whatsoever without written permission from the author except in the case of brief quotation embodied in critical articles and reviews.

We still wave on our way to Vegas, and can still hear your awesome laughter! Love you tons!

I realize that as the majority of this book is set in the thirteenth century, my main characters would not be able to understand each other in either Gaelic or English. In fact, during this time period, French was actually the language of the king and his court until the end of the 14th century. I hope you'll forgive the artistic license I've taken and appreciate the story for what it is—a fun romp through time. Enjoy!

In Medieval Scotland, if she dresses, talks, and curses like a witch...

Archaeologist Dr. Samantha Ryan has figured out where The Scottish Crown is hidden—an artifact that went missing over 750 years ago. Now she just needs to beat her lying, cheating competitor to the Highlands and find it first. When a struggle ensues, they travel back in time to medieval Scotland where, unfortunately, the villagers think she's a witch, tie her up, and start gathering wood for a bonfire. Thinking to play on their superstitions so she can save herself, she curses them all. Not her best idea yet.

...it's time to gather firewood!

Laird Ian MacGregor is a dead man walking. It's only a matter of time before one of the many attempts on his life will succeed. When he is informed the villagers are burning another witch, he is enraged and determined to save the hapless woman. Unfortunately the foolish female doesn't know when to keep her mouth shut. Ian rescues her anyway, ensuring any headway he'd made toward earning the villagers’ trust is shattered. Locking her up only makes his people fear the witch in possession of his tower—a witch determined to steal the crown entrusted to him. While trying to find a murderer, keep King Alexander's crown safe, and control the unruly woman who may indeed be gifted with foresight, he finds himself wondering—now that he's caught her, how does he keep her?

Past and present are about to ignite.

When modern meets medieval, can there be a happily ever after?

Ian fought for all he was worth. At eight, he was big for his age—sturdy as a pack horse, his mother liked to say—and he bit, scratched, and kicked, earning a cuff on the side of his head hard enough to fell him to his knees. But at last he was free.

“Mother!” He glanced wildly about, searching through legs, skirts, and feet, seeking a green gown as hard hands clamped on his arms, his shoulders, pulling him back.
“Mum!”

The desperation in his mother’s voice spurred him to greater fury, and a kick to the knee of one of the men holding him resulted in a loosened grip as the man cursed and stumbled back. A bite to the fingers of the hand on his upper arm and he was free again.

Ian snaked through the crowd and it only took a few moments to find his mum in the crowd’s center. He squirmed around one of the men restraining her and wrapped both arms tightly about her waist.

“Oh, Ian. No, son. You cannot be here.” She kissed the top of his head, and struggled against the men holding her fast. “You need to stay with Joan and Brodrick. Please, dearest, can you not do this for me?”

“Nae.”
He screamed the word. “I’ll not leave ye.” Rough hands grabbed him by the waist and pulled. He tightened his grasp around his mother and wouldn’t let go. Fingers bit into his stomach, digging, stretching skin, hurting, and he cried out.

His mother struggled in earnest, her black braid swinging forward to fall against his face. “Do not hurt him! Do not touch him! I will talk to my son.”

The slap across her face startled Ian enough to loosen his grip so he could look up at her, and he was immediately torn away. He glanced between the adults, men he’d known his entire life, clutching and pushing at his mother. How could they have turned on them?
“Let go of her! Let go! I’ll bash you!”

Clawing at the fingers holding him did no good, so he turned and bit the fleshy forearm of the man gripping him.

The man let out a yell, released Ian, and backhanded his face. “Filthy witch’s get.”

The force and pain felled Ian to the ground, but when the man reached for him again, Ian scooted and scrambled between the legs of the men and women gathered around. He turned and crawled, kicked the hand that grabbed his foot, and when he reached his mother, latched onto the leg of one of the men holding her, and bit with all his might.

The man screamed, jerked his leg, hauled back to deliver a kick, and suddenly Ian’s mother was there, covering him with her body, protecting him with arms wrapped tight about him. “Leave him be.” Tears fell hot against his neck.
“Let him alone!”

Now that Ian was engulfed in his mother’s arms, in her scent, he started to sob, the fear of the last moments giving way, burning through him.

“There, there, lad.” Her English accent was strong now, sharp with emotion, and Ian wondered if the clan had turned on her because of her
otherness
. He’d heard the whispers. Knew some despised her. She knelt in the dirt with him, clasping him tightly as if she’d never let him go. He was eight, not a baby anymore, but right now he was exactly where he needed to be. She started to rock him. “There, there, little man.” He couldn’t help the sobs that burst from him, nor the ones that followed, threatening to overwhelm.

“Do not let her contaminate the child with her wickedness.” The voice, the new priest come to village this past fortnight, sent ice and fiery hatred through Ian’s veins. When harsh hands pulled and lifted them both, Ian clung with everything in him, clutching his mother as she clasped him in return. A blow to her back unbalanced them both and numbed his hands and another attacker jerked him away as she tried to cling. He thrust his fingers out as far as they’d reach. “Mum! Mum! Dinna touch her.
I’ll kill you if you touch her!”

“You see? Already, she taints the child.”

His mother sobbed as she reached for him but her arms were captured and jerked behind her back. She drew a deep breath.
“Joan!”
His mother screamed for her friend and neighbor. “Take my son. Take him from here. I do not wish him to see this. Please keep him safe. Please keep him well, I beg you. He’s yours now.”

Strong arms enclosed Ian as he was passed to Brodrick, Joan’s burly husband, and his mother dragged in another direction as Brodrick shouldered his way through the crowd, clasping Ian tight, restraining his thrashing legs in a firm hold. Joan was suddenly there, fear stark on her pale face, the whites of her eyes showing as she advanced with her husband toward their hut.

Brodrick stopped and turned and Ian finally got a clear view of the man standing on the back of a wagon, his fine red garment glowing bright in the afternoon sunlight, the large gold cross gleaming at his chest. When Ian first saw the man, the
priest
, he’d thought him a fine figure, tall, slim, and elegant, everything a man of God should be. Later, when the priest cut himself on an edge of rough stone and visited his mother for a poultice, the man had given Ian a spiders-down-his-shirt feeling as he’d touched his mother’s hand and stared upon her.

Now he knew the man’s true character. Could see clearly that, black heart and soul, the man was the devil himself.

“I wish the boy to watch. I wish him to see what happens to witches when they practice their craft in the world of decent God-fearing men.”

Brodrick’s hard hand clamped tight over Ian’s mouth, but it didn’t stop Ian from glaring at the devil. He tried to convey that he may have fooled others, but not Ian. If it took the whole of his life, he’d find the man and send him back to the fiery pits from whence he’d sprung.

“He’s just a boy, your worship,” Brodrick said. “Big for his age, to be sure, but a boy nonetheless.”

“He’s old enough to understand murder, surely? And he’s threatened to kill me, has he not? Bring him forward.” He motioned to one of his men, a guard who pushed through the crowd to follow instructions.

Ian was grasped with hard hands but Brodrick wrenched away and gave the man his broad back.

“What is this?” The priest’s voice was amused. “I’m unsurprised by the witch’s defiance, but would you directly challenge a man of God? Do you wish to join the witch in the flames? Or perhaps it’s your wife who has been spending too much time with her friend?”

“My wife is a God-fearing woman,” Brodrick’s voice was stark, overloud. “She is good wi’ the young ones, that is all, and wouldna wish to see one scared or hurt.”

Brodrick slowly loosened his hold on Ian and he ran toward his mother, but was quickly intercepted by one of the priest’s men and thrown roughly over a shoulder.

“No.”
His mother screamed the word.
“What is wrong with you all? Let him go!”

Ian was dumped on the ground and secured by two men, one of whom cupped his chin, urging his face upward, forcing him to stare into the triumphant eyes of the fiend himself.

“How can you do this? His mother’s voice rang out. “Have I not tended your young? Healed your wounds? Dugan,” her voice broke. “Remember when you injured your arm?”

The devil, still gazing into Ian’s eyes, lifted both hands into the air. “He has her look. Dark hair, pretty features, and green eyes.” He raised his voice. “Mayhap he is a witch in the making?”

“Laird MacGregor!” his mother sobbed. “He is your son. Your
blood.
Take him from here, Sinclair.
Please help him.”

All eyes turned toward the laird, including Ian’s. Whispers started. His son? What did she mean?

“Take him to England. To my family. Or I swear by all I hold sacred I will haunt you and your
wife,”
she spat the last word, “for the rest of your short lives.”