Beyond Belief: Islamic Excursions Among the Converted Peoples (Vintage International) 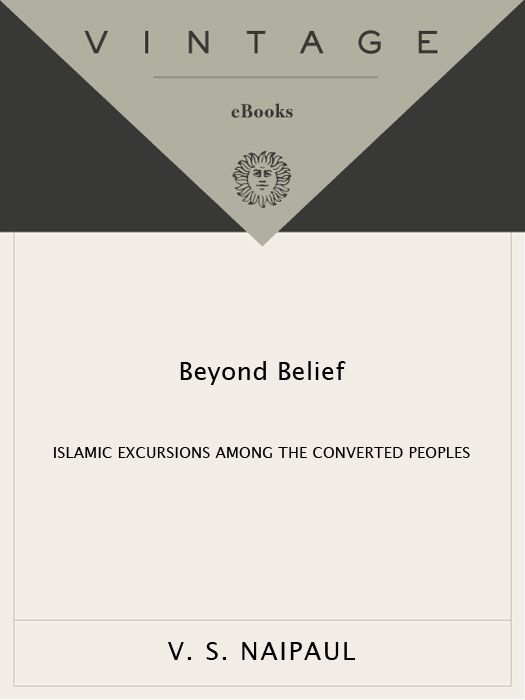 V. S. Naipaul was born in Trinidad in 1932, of Indian ancestry, and emigrated to England in 1950. He began writing in 1954, winning numerous awards, including the Booker Prize in 1971. In 1981, Naipaul’s
Among the Believers: An Islamic Journey,
an account of his travels in Indonesia, Iran, Pakistan, and Malaysia, was published to universal acclaim. Naipaul received a knighthood for services to literature in 1990.

India: A Million Mutinies Now
A Turn in the South
Finding the Centre
Among the Believers
The Return of Eva Perón
with
The Killings in Trinidad
India: A Wounded Civilization
The Overcrowded Barracoon
The Loss of El Dorado
An Area of Darkness
The Middle Passage

A Way in the World
The Enigma of Arrival
A Bend in the River
Guerrillas
In a Free State
A Flag on the Island
The Mimic Men
Mr. Stone and the Knights Companion
A House for Mr. Biswas
Miguel Street
The Suffrage of Elvira
The Mystic Masseur

Vintage is a registered trademark, and Vintage International and colophon are trademarks of Random House, Inc.

Prologue
PART ONE
INDONESIA
The Flight of the N-250
1. The Man of the Moment
2. History
3. A Convert
4. A Sacred Place
5. Kampung
6. Below the Lava
7. Oh Mama! Oh Papa!
8. Ghosts
PART TWO
IRAN
The Justice of Ali
1. The Foundation of the Oppressed
2. Mr. Jaffrey’s Round Trip
3. The Great War
4. Salt Land
5. The Jail
6. The Martyr
7. Qom: The Punisher
8. Cancer
9. The Two Tribes
PART THREE
PAKISTAN
Dropping off the Map
1. A Criminal Enterprise
2. The Polity
3. Rana in His Village
4. Guerrilla
5. Penitent
6. Loss
7. From the North
8. Ali’s Footprint
9. War
PART FOUR
MALAYSIAN POSTSCRIPT
Raising the Coconut Shell
1. Old Clothes
2. New Model
3. The Bomoh’s Son
4. The Other World

T
HIS IS A BOOK
about people. It is not a book of opinion. It is a book of stories. The stories were collected during five months of travel in 1995 in four non-Arab Muslim countries—Indonesia, Iran, Pakistan, Malaysia. So there is a context and a theme.

Islam is in its origins an Arab religion. Everyone not an Arab who is a Muslim is a convert. Islam is not simply a matter of conscience or private belief. It makes imperial demands. A convert’s worldview alters. His holy places are in Arab lands; his sacred language is Arabic. His idea of history alters. He rejects his own; he becomes, whether he likes it or not, a part of the Arab story. The convert has to turn away from everything that is his. The disturbance for societies is immense, and even after a thousand years can remain unresolved; the turning away has to be done again and again. People develop fantasies about who and what they are; and in the Islam of converted countries there is an element of neurosis and nihilism. These countries can be easily set on the boil.

This book is a follow-up to a book I published seventeen years ago,
Among the Believers,
about a journey to the same four countries. When I started on that journey in 1979 I knew almost nothing about Islam—it is the best way to start on a venture—and that first book was an exploration
of the details of the faith and what looked like its capacity for revolution. The theme of conversion was always there; but I didn’t see it as clearly as I saw it on this second journey.

Beyond Belief
adds to the earlier book, takes the story on. It also moves in a different way. It is less of a travel book; the writer is less present, less of an inquirer. He is in the background, trusting to his instinct, a discoverer of people, a finder-out of stories. These stories, opening out one from the other, make their own pattern and define each country and its promptings; and the four sections of the book make a whole.

I began my writing career as a fiction writer, a manager of narrative; at that time I thought it the highest thing to be. When I was asked—nearly forty years ago—to travel about certain colonial territories in South America and the Caribbean and to write a book, I was delighted to do the traveling—taking small airplanes to strange places, going up South American rivers—but then I wasn’t sure how to write the book, how to make a pattern of what I was doing. That first time I got away with autobiography and landscape. It was years before I saw that the most important thing about travel, for the writer, was the people he found himself among.

So in these travel books or cultural explorations of mine the writer as traveler steadily retreats; the people of the country come to the front; and I become again what I was at the beginning: a manager of narrative. In the nineteenth century the invented story was used to do things that other literary forms—the poem, the essay—couldn’t easily do: to give news about a changing society, to describe mental states. I find it strange that the travel form—in the beginning so far away from my own instincts—should have taken me back there, to looking for the story; though it would have undone the point of the book if the narratives were falsified or forced. There are complexities enough in these stories. They are the point of the book; the reader should not look for “conclusions.”

It may be asked if different people and different stories in any section of the book would have created or suggested another kind of country. I think not: the train has many coaches, and different classes, but it passes through the same landscape. People are responding to the same political or religious and cultural pressures. The writer has only to listen very carefully and with a clear heart to what people say to him, and ask the next question, and the next.

There is another way of considering the theme of conversion. It can be seen as a kind of crossover from old beliefs, earth religions, the cults of rulers and local deities, to the revealed religions—Christianity and Islam principally—with their larger philosophical and humanitarian and social
concerns. Hindus say that Hinduism is less coercive and more “spiritual”; and they are right. But Gandhi got his social ideas from Christianity.

The crossover from the classical world to Christianity is now history. It is not easy, reading the texts, imaginatively to enter the long disputes and anguishes of that crossover. But in some of the cultures described in this book the crossover to Islam—and sometimes Christianity—is still going on. It is the extra drama in the background, like a cultural big bang, the steady grinding down of the old world.