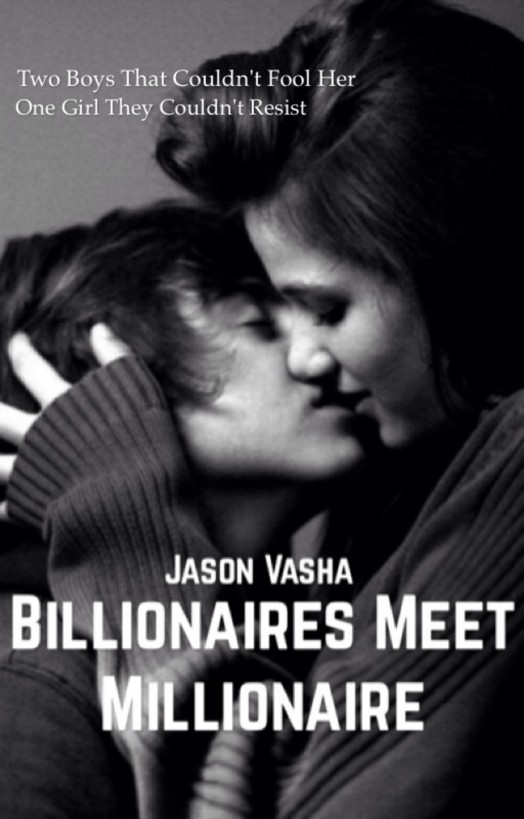 This ebook is licensed for your pers
onal enjoyment only. This ebook may
not be re-sold or given away to other person
.
If you would like to share this
book with another person, please purchase an additional copy for
each recipient. If you’re reading this book and did not purchase
it, or it was not purchased for your enjoyment only, then please
delete it and purchase your own copy. Thank you for respecting the
hard work of this author.

All characters appearing in this work are fictitious. Any
resemblance to real persons, living or dead, is purely
coincidental.

Other Books By
Jason Vasha

My Prince, The
Billionaire

This Book is
for

Olta, who is
my millionaire.

It was typical
to see Olta with her mother. She'd never leave her, as she
considered her as her rock. You could say that a smile who never
leave her mother’s face.

"Oh my dear sweet mother, have I ever told you that it is
utterly insane for you to install this rule?"
Olta said, while looking at her
mother's back hanging into the refrigerator. In Albania, you only
learn British English. To Britain it seemed normal, perhaps Olta
was British… But in America it's plain boring.

"Olta,
we've gone over this. Your English is truly up to par, but your
sister's is not. Until she is as eloquent as you are, my sweet
darling, we are speaking English in this household. Now, drop it."
Her mother answered with only the slightest hints of sarcasm here
and there. Removing herself from the fridge, she held some zucchini
and sweet pepper.

Olta’s mother
knew English since she was young. She truly wanted the best for her
children.

“Mother, just call me Olta. We seem too
weird
when you say it like that.” Olta
said, trying to cover her face with the vegetables.

"Alright, h
ave I ever told you that you are truly gifted with a knife
and vegetables." She looked pointedly at her daughter over the
kitchen counter and placed the vegetables, a cutting plate and a
knife in front of Olta. Then she turned at her heels and walked
out.

"Yes,
actually you have…. Could you do me a favour?"

“Stop
giving me compliments! It's, embarrassing!” Olta called after her
in a sing-song voice. As she started on the zucchini Olta
contemplated her first real day in the U.S. of A and she
sighed.

She'd known of
that this moment would come for over a half a year and yet it still
had come as a surprise to her. At first she had been delighted
about it, the prospect of moving away. No more memories of her
father to haunt her every step in the house, a fresh start in a new
school.

Yes, it
would be great to move away to a country were nobody even knew
where on this awful planet Albania were, let alone the city of
Tirana. But then things had changed over the past few months. The
memories of her father were still there, they would never leave
her, no matter where they lived. But a fresh start in a new school
didn't seem all to necessary. The bullies had started to lay off
and on the fifth grade annual trip to Rome, she even found that she
could talk and interact with those same bullies at a whole new
level. Had that only been three weeks ago, she wondered, yes it
had.

Only
three weeks ago she had been baking under the Italian sun and now
here she was in upstate New York. But she had made one decision,
though, the mistakes she apparently had made in her old school, she
would not repeat. The thoughts of Albania appeared in her
mind.

She always
loved the beautiful culture with the music and don't forget the
beauty of Vlore, Skrapar and even Shokder!

Her mind was blocking her movements
. The knife accidentally peeled some
of the skin on her finger.

Olta
yelped as she felt the knife cutting her index finger and
she looked at the cut in dismay, before sucking on wound. "why oh
why,' she thought to herself, "wasn't it possible to get trough
even one day without some truly stupid act of self mutilation.".
Thankfully, Maggie just came bouncing, there was no other word for
describing her movements, into the kitchen.

Olta always
loved Maggie, but they were typical sisters that fought a lot.

"What
you do, cut yourself?" She asked, sitting herself down behind the
kitchen counter and looking attentively at her sister sucking her
finger. Olta slowly removed her finger and caught Maggie's
eye.

"Yes
indeed Maggie, I did cut myself. Meg! Wow, it's no wonder that I'm
smarter." Not taking her eyes off her baby sister she slid the
plate of the partially sliced zucchini towards her.

"Now why
don't you be a dear sweet sister and cut the rest of the veggies
while I go in search of a band-aid." Maggie narrowed her eyes just
slightly and said in tone that sounded very much like her
mother's.

Maggie
couldn't say no. Olta always helped her, she was like a warrior.
However, she didn't want to “work”.

"Of course, no just run along and try not to hurt
yourself,
Alright?" Olta tried to glower at her, but she knew there
was only amusement on her face.

“I'm not
a child, Meg… Just stop it… No wonder you haven't gotten any
friends.” Olta said, finally releasing her anger.

“Alright.”
Maggie said trying to act like a woman my shoving her flat breasts
up,

"Why thank you, my dear sister, and please note that you're
a cheeky little brat." They
smiled at each other knowingly.

“Do not push
it!” Maggie replied, trying to hide her emotions.

“A
normal person would say DON’T PUSH IT!” Olta replied, now tired of
this conversation.

With
that Olta went in search of a band-aid.

Niall
flipped through his notebook. Again and again and again. He
tried to read the words but he just couldn't concentrate on them.
The pain in his upper torso and abdomen were seriously distracting
him. Annoyed he slammed the book shut and pushed his chair away
from his desk. He laid down on his bed, flicking his television
on.

"Why the
fuck do it now anyways", he whispered to himself, "I've got a whole
weeks worth of detention to catch up." And with that he decided on
watching some rerun of Harry.

Niall and work
simply don't go, at all.

Olta
sat in the principal's office. She noticed herself getting
more and more nervous by the minute. Here she was on her first day
in a new school in a new country. She had been here already, the
week before. She hadn't been nervous then, going through the
motions of admittance talks with principal and the guidance
counsellor and who not, but that had not included any interaction
with other students.

Olta had never set foot in an office.
Maybe I should get in trouble,
that way I'll look cool, am I right?
She wondered. Everything was new to her.
In Albania you're cool if you break the rules and don't cry if the
teacher slaps you.

Now, she
actually had to go into classes and introduce herself. Already she
felt their looks of their disapproval and disgust and then there
was that damned band-aid on her finger. She ripped it off in one
motion and not seeing a waste basket around, she put it in the
pocket of her coat.

"Olta,
dear," the principal pulled her out of her trance and she looked up
at the dark-haired woman. Mrs. Rume reminded her of her old
principal; the main difference being the latter had gray hair
already. The principal smiled.

"Now,
you're guide will be joining us shortly and he'll take you on tow,
so to speak, for the rest of week.” Mrs. Rume says. Olta now knew
this lady had a heart.

“Excuse
me uh principle but I'm not great with English, so what does guide
mean?” She asked, trying not to look embarrassed.

Mrs. Rume thought it was actually sweet. Her lips curled up
while patting Olta on the back. She didn't know how to describe
a
guide.

“Well, a guide is a
a person who advises or shows the way to others.”
She replied.

As Olta smiled
her eyes got bigger.

“You
know, to help you get a handle on this place. I understand
your former school was quite small?"

Olta
nodded politely; she was nothing, if not polite.

"Yes,
Mrs. Rume, it was." Just as she was to elaborate on the matter, the
door swung open. A boy her age stepped in. He walked straight
towards Mrs. Rume's desk, not noticing Olta.

"You
called Mrs. Rume?" He said and Olta noticed his playful tone of
voice.

"That I
did, that I did, Mr. Foy and seeing as that you have seriously
tainted your record by last week's actions, I really don't see why
you are so vivacious this morning."

Olta
noticed Mr. Foy shifting his weight slightly and caught
herself thinking that the boy had a nice ass, actually from the
back the Mr. Foy looked fine allover.

"No, no,
no," Olta berated herself silently. "You're not going to checking
any boy out. Before you know it you'll get crush on someone and get
your stupid little hopes up and we all know where that will land
you."

She decided to
heed her own advice, but not before checking the guy out just once
more. He wore a baggy pair of jeans with a dark green long-sleeve
on top and a pair of simple sneakers beneath.

"God, if
his ass looks good in this outfit, he really must have a nice ass."
She caught herself thinking as Mr. Foy replied.

"It's a
new day,a new dawn, Mrs. Rume." Mrs. Rume smiled as he quoted some
lyric even she knew.

"Indeed
it is Mr. Foy and seeing as I am in very forgiving mood this
morning, I am willing to give you a clean slate." Mrs. Rume was
still smiling at Mr. Foy and as if in an afterthought, she added:
"In return for a favour, of course."

"But of
course Mrs. Rume. And what would I have to do this time?" Mr. Foy
replied instantly.

Olta
smiled as she was listening to this exchange. The boy had
gotten himself into trouble, boy could get himself out of trouble
by.. And then it hit her. Boy would be getting himself out of
trouble by being her guide. Could she be any more dense, she asked
herself. Confirming her fears Mrs. Rume said.

The Hidden Gifts of the Introverted Child by Marti Olsen Laney Psy.d.
1958 - Not Safe to be Free by James Hadley Chase
Taming The Boss (Billionaires In The City Book 7) by Crowe, Mallory
Berlin: A Novel by Pierre Frei
Blue Labyrinth by Douglas Preston, Lincoln Child
Baited Blood by Sue Ann Jaffarian
Survivor: 1 by J. F. Gonzalez
The Rose Without a Thorn by Jean Plaidy
Roadkill TUEBL Edition by Leonard Kirke
3 a.m. (Henry Bins 1) by Nick Pirog