Blue Collar Conservatives: Recommitting to an America That Works 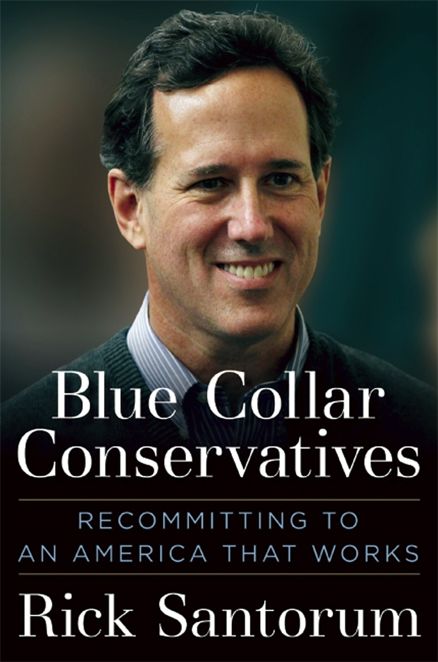 Books are available in quantity for promotional or premium use. Write to Director of Special Sales, Regnery Publishing, One Massachusetts Avenue NW, Washington, DC 20001, for information on discounts and terms, or call (202) 216-0600.

Blue Collar Conservatives
is dedicated to all the hardworking moms and dads who both pursued their dreams and sacrificed them for their children to forge the greatest country in the history of the world.

To Karen, Elizabeth, John, Daniel, Sarah Maria, Peter, Patrick, and Bella for helping me with this book. You are my American Dream.

Restoring the American Dream for Workers

A GOP That Stands Up for Everyone

Holes in the Boat

Renewing the Pursuit of Happiness

Replace Obamacare Before It’s Too Late

Raising Hope instead of Taxes

I
t was a night I will never forget, November 6, 2012. Another election night, something we had experienced a dozen times throughout the 2012 Republican primary season, only this time we were actually rooting for Mitt Romney to win. I sat with my wife, Karen, and our children at home waiting to see if the exit polls we had seen earlier in the day were going to play out. I felt uncomfortable not being in the action, but mainly I felt frustrated that the two campaigns ended up fighting over mostly minor issues, distracting America from the questions that made this the most consequential election since the Civil War.

Dramatic, dangerous changes are taking place in America, and this election should have been about them. One such change is a fundamental restructuring of Washington’s relationship with the American people. Our freedom as individuals, families, businesses, and communities is being drastically curtailed by imperious bureaucrats who think they know better than we do how to run our lives. The botched implementation of Obamacare has given us a glimpse of what happens when these grand government schemes inevitably fail. People get hurt.

In 2012, so much was at stake, yet so little was debated. For more than a century, the growing left wing of the Democratic Party has been pursuing a secularist and socialist agenda for America. Their method is class warfare—pitting one group of Americans against another. It’s the rich versus the poor, men versus women, the 1 percent versus the 99, the insurance company versus the uninsured, and the natural gas driller versus his neighbors. They don’t want to improve on America’s success, correct its mistakes, and help it live up to its promise. They think that something is wrong with America at its core—that it needs to be “fundamentally transformed.”
1
Their progress was slow but steady until they achieved their breakthrough in 2008 with the election of Barack Obama and supermajority Democrat control of both houses of Congress.

After four years of unchecked “transformation,” Americans should have had a chance for second thoughts. But President
Obama’s opponent was the wrong choice to lead the charge against the Democrats’ radical agenda. Governor Romney is as fine a man as I know. I supported him for president in 2008. But I also knew that in 2012, the political climate was very different. The challenger to President Obama couldn’t be a wealthy financier who supported the Wall Street bailouts at a time when the “Occupy” movement and the president had successfully created a narrative for Middle America of the 99 percent versus the 1 percent. Even worse than a nominee who would be on the defensive against the president’s greatest weapon, class warfare, Romney was, as I often repeated during the campaign, “uniquely unqualified”
2
to press our best argument against the president—Obamacare. As governor of Massachusetts, he signed the law that paved the way for Obamacare, the focal point of a conservative movement that rallied the country in 2010 to a historic victory in the House of Representatives.

That is why Karen and I decided that I should run for president. I felt called to make the case that the establishment candidate could not win on both Obamacare and the 99 percent. I would campaign as a grandson of immigrants who didn’t come from money. I would campaign for the working man. I would campaign on America’s first principles of faith, family, freedom, and opportunity, which are the antidote to President Obama’s secular statism.

What kept me in the race as I sat at the bottom of almost every national poll were the people I met, particularly in the
early caucus state of Iowa. I visited all ninety-nine counties and did about 381 town hall meetings and speeches in that state over the course of 2011. The average attendance at these local gatherings was about twelve, including me, so I really got to know people. What struck me was their passion and concern for our country. They encouraged me to keep fighting, because they believed what I believed.

The conventional wisdom in the spring of 2012 was that President Obama would be defeated.
3
The economy was stagnant. “Hope and change” had provided no hope and only change for the worse. In a contest between Obama and “anybody but Obama,” Obama was going to lose.

The pundits, as it turned out, were wrong. “Anybody but Obama” wasn’t good enough. It mattered whom the Republicans nominated from both a policy and personal perspective. The critical swing voters—middle- and lower-middle–income Americans from industrial and rural communities with generally conservative values—swung for Obama or stayed home. Ironically, they were the ones who were being hurt the most by Obama’s failed economic policies. They generally don’t look to the government for help. But our party didn’t seem to care about them. After four years of economic insecurity, what hope did we offer them that they would be better off with a Republican president?

Mitt Romney’s résumé as a venture capitalist didn’t help him here. I defended him in the primaries when others were attacking his Wall Street deals, because people like him create efficient and profitable companies. Venture capitalists nurtured Apple, Intel, and Google. And there’s nothing wrong with making money and living well in America. Mitt Romney is a great businessman, problem solver, and manager, and I can’t fault him for running on his strengths.

But those strengths played into Obama’s hands in 2012. The Democrats and their allies in the media were determined to turn the election, using the politics of envy, into the decisive battle of the great class war. And the Republican establishment obliged by nominating what turned out to be the perfect opponent.

After the election, many Americans were polled on why they voted as they did. Out of all the data and analyses, one fact jumped out at me: those who voted for a candidate because he “cared more” about people like them chose President Obama over Governor Romney by a margin of
63 percent
.
4
Even if you win the argument on political philosophy, leadership, and managerial competence, it’s hard to win an election when most voters don’t think you care about them.