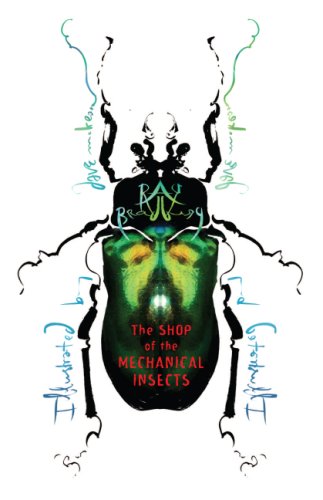 It was past time for him to see the
doctor again.
Mr
Harris turned palely in at the
stairwell, and on his way up the flight saw Dr
Burleigh’s
name gilded over a pointing arrow. Would Dr Burleigh sigh when he walked in? After
all, this would make the tenth trip so far this year. But Burleigh shouldn’t
complain: he was paid for the examinations!

The nurse looked
Mr
Harris over and smiled, a bit amusedly, as she tiptoed to the glazed glass
door, opened it, and put her head in. Harris thought he heard her say, ‘Guess
who’s here, Doctor.’ And didn’t the doctor’s voice reply, faintly, ‘Oh, my God,
again?
’ Harris swallowed uneasily.

When Harris walked in, Dr Burleigh
snorted.
‘Aches in your bones again!
Ah!!’ He scowled
and adjusted his glasses. ‘My dear Harris, you’ve been curried with the
finest-tooth combs and bacteria-brushes known to science. You’re just nervous.
Let’s see your fingers.
Too many cigarettes.
Let’s
smell your breath.
Too much protein.
Let’s see your
eyes. Not enough sleep.
My response?
Go to
bed,
stop the protein, no smoking.
Ten
dollars, please.’

The doctor glanced up from his
papers.
‘
You
still here?
You’re a
hypochondriac! That’s
eleven
dollars, now.’

‘But why should my bones ache?’ asked
Harris.

Dr Burleigh spoke as to a child. ‘You
ever had a sore muscle, and kept irritating it, fussing with it, rubbing it? It
gets worse, the more you bother it. Then you leave it alone and the pain
vanishes. You realize you caused most of the soreness yourself. Well, son,
that’s what’s with you. Leave yourself alone. Take a dose of salts. Get out of
here and take that trip to
Phoenix
you’ve stewed about for months. Do you good to travel!’

Five minutes later,
Mr
Harris riffled through a classified phone directory at
the corner druggist’s. A fine lot of sympathy one got from blind fools like
Burleigh! He passed his finger down a list of Bone Specialists, found one named
M.
Munigant
.
Munigant
lacked an M.D., or any other academic lettering behind his name, but his office
was conveniently near. Three blocks down, one block over…

Mr
Munigant
, like his office, was small and dark. Like his
office, he smelled of
iodoform
, iodine, and other odd
things. He was a good listener, though, and listened with eager shiny moves of
his eyes, and when he talked to Harris, his accent was such that he softly
whistled each word: undoubtedly because of imperfect dentures.

M.
Munigant
nodded. He had seen cases like this before.
The bones of the body.
Man was not aware of his bones. Ah, yes, the bones.
The
skeleton.
Most difficult.
Something
concerning an imbalance, an unsympathetic coordination between soul, flesh, and
skeleton.
Very complicated, softly whistled M.
Munigant
.
Harris listened, fascinated. Now,
here
was a doctor who understood his illness! Psychological, said M.
Munigant
. He moved swiftly, delicately to a dingy wall and
slashed down half a dozen X-rays to haunt the room with their look of things
found floating in an ancient tide. Here, here! The skeleton surprised! Here
luminous portraits of the long, the short, the large, the small bones.
Mr
Harris must be aware of his position, his problem! M.
Munigant’s
hand tapped, rattled, whispered, scratched at
faint nebulae of flesh in which hung ghosts of cranium, spinal cord, pelvis,
lime, calcium, marrow, here, there, this, that, these, those, and others! Look!

Harris shuddered. The X-rays and the
paintings blew in a green and phosphorescent wind from a land peopled by the
monsters of Dali and
Fuseli
.

Well, M.
Munigant
could not help Harris unless Harris was in the proper mood. Psychologically,
one had to
need
help, or the doctor was useless. But (shrugging) M.
Munigant
would ‘try.’

Harris lay on a table with his mouth
open. The lights were switched off, the shades drawn. M.
Munigant
approached his patient.

He felt his jawbones forced out. They
creaked and made faint cracking noises. One of those skeleton charts on the dim
wall seemed to quiver and jump. A violent shudder seized Harris. Involuntarily,
his mouth snapped shut.

M.
Munigant
shouted. His nose had almost been bitten off! No use, no use! Now was not the
time! M.
Munigant
whispered the shades up, dreadfully
disappointed. When
Mr
Harris felt he could cooperate
psychologically, when
Mr
Harris really
needed
help and trusted M.
Munigant
to help him, then maybe
something could be done. M.
Munigant
held out his
little hand. In the meantime, the fee was only two dollars.
Mr
Harris must begin to think. Here was a sketch for
Mr
Harris to take home and study. It would acquaint him with his body. He must be
tremblingly aware of himself. He must be on guard. Skeletons were strange,
unwieldy things. M.
Munigant’s
eyes glittered. Good
day to
Mr
Harris. Oh, and would he care for a
breadstick? M.
Munigant
proffered a jar of long hard
salty breadsticks to Harris, taking one himself, saying that chewing breadsticks
kept him in—ah—practice. Good day, good day to
Mr
Harris!
Mr
Harris went home.

The next day, Sunday,
Mr
Harris discovered innumerable fresh aches and pains in
his body. He spent the morning, his eyes
fixed,
staring with new interest at the small, anatomically perfect painting of a
skeleton M.
Munigant
had given him.

His wife, Clarisse, startled him at
dinner when she cracked her exquisitely thin knuckles, one by one, until he
clapped his hands to his ears and cried, ‘Stop!’

The rest of the afternoon he
quarantined himself in his room. Clarisse played bridge in the parlor laughing
and chatting with three other ladies while Harris, hidden away, fingered and
weighed the limbs of his body with growing curiosity. After an hour he suddenly
rose and called:

She had a way of dancing into any
room, her body doing all sorts of soft, agreeable things to keep her feet from
ever quite touching the nap of a rug. She excused herself from her friends and
came to see him now, brightly. She found him re-seated in a far corner and she
saw that he was staring at the anatomical sketch. ‘Are you still brooding,
sweet?’ she asked. ‘Please don’t.’ She sat upon his knees.

Her beauty could not distract him now
in his absorption. He juggled her
lightness,
he
touched her kneecap, suspiciously. It seemed to move under her pale, glowing
skin. ‘Is it supposed to do that?’ he asked, sucking in his breath.

‘Is what supposed to do what?’ she
laughed. ‘You mean my kneecap?’

‘Is it supposed to run around on top
of your knee that way?’

She experimented. ‘So it
does
,’
she marveled.

‘I’m glad yours slithers, too,’ he
sighed. ‘I was beginning to worry.’

He patted his ribs. ‘My ribs don’t go
all the way down, they stop
here
. And I found some confounded ones that
dangle in midair!’

Beneath the curve of her small
breasts, Clarisse clasped her hands.

‘Of course, silly.
Everybody’s ribs stop at a given point. And those funny short ones are floating
ribs.’

‘I hope they don’t float around too
much.’ The joke was most uneasy. Now, above all, he wished to be alone. Further
discoveries, newer and stranger archaeological diggings, lay within reach of
his trembling hands, and he did not wish to be laughed at.

‘Thanks for coming in, dear,’ he
said.

‘Any time.’
She rubbed her small nose softly against his.

‘Wait! Here, now…’ He put his finger
to touch his nose and hers. ‘Did you realize? The nose-bone grows down only
this
far. From there on a lot of gristly tissue fills out the rest!’

She wrinkled hers.
‘Of
course, darling!’
And she danced from the room.

Now, sitting alone, he felt the
perspiration rise from the pools and hollows of his face, to flow in a thin
tide down his cheeks. He licked his lips and shut his eyes. Now…now…next on the
agenda, what…?
The spinal cord, yes.
Here. Slowly, he
examined
it,
in the same way he operated the many
push-buttons in his office, thrusting them to summon secretaries, messengers.
But now, in these
pushings
of his spinal column,
fears and terrors answered, rushed from a million doors in his mind to confront
and shake him! His spine felt horribly—unfamiliar. Like the brittle shards of a
fish, freshly eaten, its bones left strewn on a cold china platter. He seized
the little rounded
knobbins
. ‘Lord! Lord!’

His teeth began to chatter. God
All-Mighty!
he
thought, why haven’t I realized it all
these years? All these years I’ve gone around with a—
skeleton
—inside me!
How
is it we take ourselves for
granted? How is it we
never question our bodies and our being?

A skeleton.
One of those jointed, snowy, hard things, one of those foul, dry, brittle,
gouge-eyed, skull-faced, shake-fingered, rattling things that sway from
neck-chains in abandoned webbed closets, one of those things found on the
desert all long and scattered like dice!

He stood upright, because he could
not bear to remain seated. Inside me now, he grasped his stomach, his head,
inside my head is a—skull. One of those curved
carapaces
which holds
my brain like an electrical jelly, one of those cracked
shells with the holes in front like two holes shot through it by a
double-barreled shotgun! With its grottoes and caverns of bone, its revetments
and placements for my flesh, my smelling, my seeing, my hearing, my thinking! A
skull, encompassing my brain, allowing it exit through its brittle windows to
see the outside world!