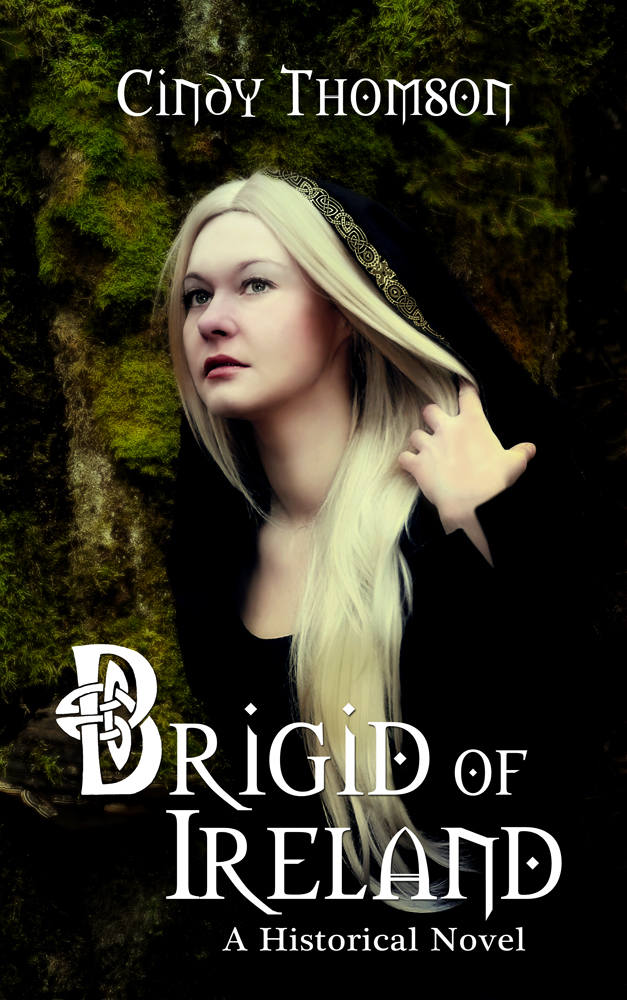 The right of Cindy Thomson to be identified

as author of this work has been asserted by her in accordance with the Copyright, Designs

First published in the UK in 2005 by Monarch Books (a publishing imprint of Lion Hudson plc),

No part of this publication may be reproduced or transmitted in any form or by any means, electronic or mechanical, including photocopy, recording, or any information storage and retrieval system, without permission in writing from the author.

Unless otherwise stated, Scripture quotations are taken from the Holy Bible, New International Version,copyright © 1973, 1978, 1984 by the International Bible Society.

Used by permission of Hodder and Stoughton Ltd.

“If God sends you down a stony path, may he give you strong shoes.”

“Does it bother ye? Being a slave, I mean?” The aged druid guided Brocca’s way while she rode horseback through the rocky slopes spanning the southern part of the Irish isle. He was her new master now.

Brocca gazed down into the man’s frosty blue eyes as he traipsed alongside the horse.

He glanced away. “Just wondering.”

A chilly midday mist coated Brocca’s eyelashes. She wiped away the moisture and patted her large belly. How should she answer? Her lot as a slave would soon cost her dearly. Didn’t the old man know?

The child within her bounced with every hoofbeat, but riding was far easier than stumbling along a rugged trail. She thought of her previous master. How could he have been so heartless to force her to leave Leinster while she was expecting his child?

Brocca took comfort in one thing. If this druid, her new master, had meant to be cruel, he would never have allowed her to ride.

Brocca clutched the mare’s blond mane and cleared her throat, causing the druid to glance back at her. She swallowed hard, hoping to steady her voice. “Nay, it does not bother me to be a slave. Patrick taught that if one accepts baptism in the Lord’s name, one may dwell on the promise that long-suffering for Jesus will result in a reward in heaven.”

The druid shook his cloaked head, aiming his words at the ground. “I do not understand ye Christians.”

Their conversation waned as they plodded through mossy fields. The druid’s statement hung in the air like fog in a gulch, and Brocca thought once or twice she’d explain. But just as soon as the words were about to come forth, she closed her mouth tight. Every explanation she could think of paled against the backdrop of what her former master had planned.

They approached a dense grove of budding trees, and the druid’s voice rose above the chatter of rooks roosting there. “Tell me about this Patrick.”

A welcome distraction. “He had a glow about him.” Brocca leaned forward as the horse suddenly picked up its pace.

The stubby man ran alongside until he finally persuaded the animal to slow. “She knows we’re close. Knows a warm barn and a feast of hay await her, she does.”

Just beyond the grove Brocca spotted Cashel, the high point occupied for many years by various kings and used as a lookout. Just a rocky patch topped with green turf, yet so important to men who sought to control other men. The man she spoke about, Patrick, had visited that same hill, even baptized a royal poet there.

Brocca smiled. Truly, this pagan knew little of the Holy Spirit. She lifted her head to breathe in the dampness, filling her lungs as much as the growing babe would allow. “Patrick? Nay, man. He did not use any magic. He had the glow from our Lord.”

Her new master arched his snowy eyebrows. Brocca knew that talk of serving only one God sounded foreign to his ears. One day she’d explain, perhaps even introduce this druid, whom pagans called a priest, to Patrick. There was so much to tell about the holy man who roamed Ireland preaching the good news of Jesus the Christ.

But now her body ached. The child within her was too large to move about any longer. Brocca knew the time of birth was drawing near. Winter had been long and hard, but spring, and her baby’s arrival, approached.

The druid urged the mare through saplings and down a lane toward a thatch-covered cottage. Smoke bellowed from the house’s roof, beckoning them with the promise of a warm turf fire. Brocca accepted the druid’s wrinkled hand as she wiggled down from the horse’s back.

He tipped his head toward the dwelling. “Go on in, now. I’ve got another slave maiden in the house who’ll serve ye some broth.”

Brocca lowered her chin to her chest and waited a moment while the old man led his horse into a tiny barn. The cries of cattle echoed off the stone-speckled hills. That barn would be her domain. Her purpose was to tend the druid’s dairy.

Brocca feared the worst part of her relocation. Before she left with the druid, she’d pretended not to hear her former master’s words. But she
had
heard. His pronouncement still echoed in her head. She held her hands over her ears, trying to drown out his voice. “The unborn child has not been sold,” he’d said. “When the time comes, he’ll return to me in Leinster.”

Brocca rubbed her swollen belly. Tears filled her eyes as she turned her back to the dairy. Perhaps the child would not be a boy. She breathed a sigh of relief. That cruel man would likely reject a girl. At least she hoped he would. Brocca wrapped both her arms around her middle and stepped slowly toward the house, longing to hold on to what she feared would soon slip away.

The wind brought the smell of spring to her senses – warm dirt, moist grass – and she pushed the thought of parting with her child to the hidden places of her mind. Pulling her colorless shawl over her head, she followed the smell of mutton broth.

After a few mornings of forgetting where she was when she awoke, Brocca adjusted to her surroundings. Then one day, just as she had settled into a routine and convinced herself that nothing would come between her and her baby, a dark figure approached the house just after milking time. Brocca scooped up her buckets and padded toward the kitchen as quickly as her large body allowed.

“Cook,” she puffed, out of breath, “a man is nearing.” Brocca trembled, fearing the baby’s father had sent someone to take possession of his offspring.

The cook never looked up from the black pot she was stirring. “A prophet from the woods, that’s all, dearie. Calm yourself. He’s just come to speak to the master. Does that often. Ye spook easily, don’t ye?” She grunted and lifted the kettle from the coals, sending sparks dancing across the dirt floor.

Brocca let her shoulders droop. The man entered, welcomed by the old druid, and Brocca immediately noticed the stranger’s eyes. They were probing, curious, windows to the man’s thoughts. He was searching for something.

The druid motioned to stools near the peat fire. “Come, sit.”

Brocca kept busy with her butter churn while she listened in on the conversation. The prophet was common, but his presence still bothered Brocca. Was he here to steal her child? His glare landed on her, and she looked away.

“That girl,” the prophet said to the druid, pointing in Brocca’s direction.

She dug her fingers into the wooden butter paddle, desperately trying to focus on her task. The man’s gaze disturbed her, and the child within her seemed to endeavor to free itself. She blew a puff of air, and a crimson strand of hair resting on her forehead stirred.
Not yet, darlin’ child. The time has not come. No one can take ye when yer not born yet.

The druid waddled toward her. “My dairymaid. Bought her from a laird up in Leinster.”

The visitor rose, leaving the snug fire to get a better look at her. The man Cook called a prophet was as mysterious as a mountain pass when he leaned over her. Brocca bit her lip. Why had the room grown so hot? The paddle seemed to stick, and push as she might, it wouldn’t budge.
Why doesn’t he leave? Vanish back into the dreary forest?

She sensed the prophet bending over her, although she tried to ignore him. He crept so close that their faces nearly touched. Brocca stole a quick glimpse. He parted his dry lips to speak. “Special, the child this one will bear. Could be a blessing or a curse. Fate will tell.” He backed away, his voice pitched high like a cackling hen’s. “The child is not to be born within the house.” He waved his cloaked arms toward the doves roosting in the beams and boomed, “But not to be born outside.”

Such nonsense.
The child poked Brocca from within, and she rubbed down the spot where the baby’s tiny limb bulged. Her child
was
a blessing. But what about the prediction of the birth? What could it mean?

The man droned on, as if in a trance. “The child will be born at sunrise tomorrow.”

“Oh, splendid!” The druid smacked his leathery palms together. “Her state has kept her from carrying out her duties effectively. ’Tis good the baby’s coming so soon.”

Brocca covered her mouth with her hand.
Long-suffering.

Reward in heaven.
She clung to Patrick’s words and prayed to God for strength.

Before the next morn’s sun crested the new grass on the surrounding hills, Brocca had dismissed the odd man’s prophecy. She completed the milking and shut the stone barn door behind her. The cook needed her delivery of milk to thicken a special first-day-of-spring stew.

Brocca breathed deeply while she toted two wooden buckets toward the house. They were filled to the brim, and Brocca watched the milk run up to the top of the bucket and then recede back again with every step she took.

She halted, freezing in her tracks. As gently as she could, she set the buckets down, and then took another breath. How strange. The baby seemed to have moved away from her lungs and the discomfort she had experienced the day before had subsided.

Brocca leaned down to retrieve the buckets’ rope handles, and then gazed up at the sky. She admired the pink horizon and remembered to thank God for the new day.

She continued, the rain-soaked soil squishing under the thin soles of her shoes. Brocca lifted her mud-caked foot and stepped onto the stone threshold. Her other foot refused to follow. Being precariously out of balance, Brocca lost her footing and plunged to the ground. A sharp pain shot up her middle like a thousand daggers. Brocca’s bloated body had landed half inside the house and half outside.

In that position Brocca’s daughter came forth, the dropped buckets providing a baptism of milk for the squalling baby, whom Brocca named Brigid.

Lancelot by Gwen Rowley
Acting Up by Melissa Nathan
Three Emperors (9780062194138) by Dietrich, William
The Doctor's Devotion (Love Inspired) by Wyatt, Cheryl
Knights: Book 01 - The Eye of Divinity by Robert E. Keller
The Miniature Wife: and Other Stories by Gonzales, Manuel
Paranormal Public (Paranormal Public Series) by Edwards, Maddy
For Life by Lorie O'Clare
The Last Guy She Should Call by Joss Wood
The Brick Yard by Carol Lynne