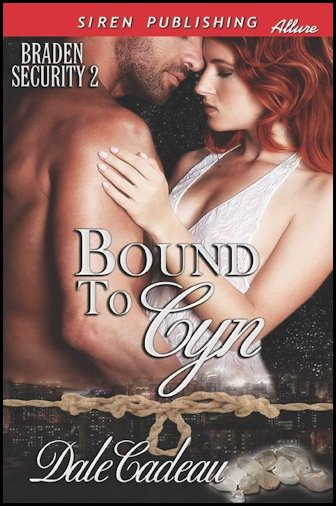 Ahtahkakoop "Angel," a Native American known as "the seer" by his partners and ex-army buddies of Braden Security, is asked by Clay, one of his partners, for a favor. The local private members only club has been having trouble with someone trying to snatch women out of its parking lot. Angel expects a very routine case but it turns out that nothing is routine when he meets Cyn.

Cinnamon "Cyn" is cool and collected on the surface but is hiding a dark past. When Cyn’s past comes back to haunt her and her secrets are revealed, it becomes a game of mind control between Cyn, the stalker, and Angel. With the help of the rest of the team, they put the pieces together and learn there is more to the predator then just wanting to snatch random women.

When Cyn disappears, a search ensues that leads to Northern California with their only clue being a garden with special seeds.

If you have purchased this copy of
Bound to Cyn
by Dale Cadeau from BookStrand.com or its official distributors, thank you. Also, thank you for not sharing your copy of this book.

This is Dale Cadeau’s livelihood. It’s fair and simple. Please respect Ms. Cadeau’s right to earn a living from her work.

To my mother, who always said there was nothing better than a good book. To my daughter Keri (Jade Belfry) and our many lunches where we talk over the lives and loves of the characters in our books. To Faye, Shannon, and Kristy for their support, and finally, to my husband who never tires of me asking how to spell a word.

Cinnamon stood in her five-inch heels and reached up to the shelf above her to turn a bottle so that she could see the label. It was Friday night and she only had a little time left to finish inventory before the club would be packed to capacity.

She usually only took care of the vanilla side of the Playground, but Lance’s involvement with his friend Clay from Braden Security had prompted the transition. Now she had to rearrange her schedule to help Lance with the small things needed to run both sections.

Although people were dying to get into Spice, Cinnamon couldn’t wait to get out. As she made her order list, she hoped her outfit of a tight black corset, mini skirt and the ridiculous, excruciating heels she was wearing didn’t show off more of her body than she wanted. Lance demanded that while she was on his side that she dress appropriately, so as to not confuse the guests.

The black wig slipped down a bit. She was almost finished. If she hurried she could place the order with their suppliers and get a liquor delivery by noon the next day. She just had a few more pieces to count, and a quick meeting with Lance. After those two things were done she could change back into her own clothes and slip back to her side of the club where she belonged.

The group of people talking around the bar suddenly became unusually silent. Cinnamon, whose back was to the room, turned to find out what had everyone’s attention. Looking around, she didn’t see anything in particular until she took notice that the majority of people were looking at the front entrance. Looking in the same direction, Cinnamon caught her breath. She now knew what had everyone’s attention. Standing on the top step leading down into the bar area was a very large, tall muscular man. If she wasn’t mistaken, he had to be at least six foot five, and his colouring indicated he was Native American. He looked like a warrior standing there with his hands on his hips, surveying the room like it was his domain. His black hair was long and hung down enough to sweep the top of his shoulders and brush the leather vest he was wearing. With his hands on his hips, it stretched the vest he was wearing, opening it, and allowed her to see his magnificent chest lightly covered in black hair. She had seen many Doms before, working side by side with Lance, but she didn’t think she had ever had the pleasure of seeing one this beautiful.

Angel stood on the top step of the spice side of the Playground and swept the room with black piercing eyes, wondering how the hell he got himself into this mess. Damn Clay and his favour. How could he refuse when all the big guy wanted was to spend time with the lady he’d met here in the vanilla bar. It couldn’t have been the spice side of the bar. No it
had
to be the vanilla side. Damn it! Clay was comfortable in this side. He wasn’t. He didn’t understand it and didn’t want to.

This was his second night at the club, but with last night’s commotion with a woman being almost snatched, he hadn’t had a chance to look in depth at the spice side of the bar. He had expected to see naked bodies and whips, but all was quiet with just a few people milling around the bar area. Feeling at a loss what to do, he narrowed his gaze to a woman behind the bar. She couldn’t be too tall as Angel could only make out the top half of her from this angle. She was dressed all in black, with her black hair tied up in some kind of bun, holding a clipboard in her hand. She probably worked at the bar here. Angel thought he would start with her as he didn’t see Lance, Clay’s friend, anywhere around.

Walking down the three steps into the floor area, he made his way in her direction. He knew he was being stared at but didn’t know why, looking at some of the costumes some of the patrons were wearing. Angel ignored their stares. He knew what he looked like dressed in leather pants and a vest with no shirt. He felt like he was dressed up for some Halloween party. He didn’t feel comfortable in the clothes, but Clay and Lance had both assured him that the Doms in this place all wore the same. So knowing that he had to try and fit in, he had allowed himself to be outfitted by Lance’s tailor. Even Laura, Clay’s lady, had said he fit in and looked OK.

Arriving at the long mahogany bar, he could now see the woman behind it fully. Taking in the black corset and skirt she wore, Angel admired the curvy body that it showcased. Looking into her large violet eyes, Angel took in her appearance. The black hair didn’t seem to suit her. In his opinion, the hair was too dark for her pale complexion. Angel stood there a moment and just admired the view. When it didn’t look like she was going to speak first, he mustered up his courage and leaned forward over the bar to ask her a question.