Bullet Through Your Face (improved format) 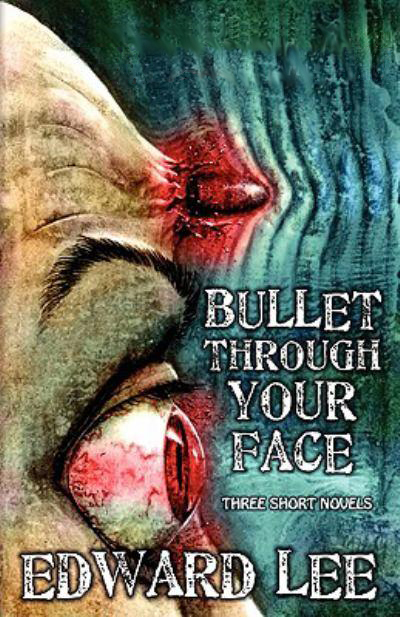 All rights reserved. No part of this book may be reproduced or
transmitted in any form or by any means, electronic or mechanical,
including photocopying, recording, or by any information storage and
retrieval system, without the written consent of the publisher, except
where permitted by law.

Gray had seen the girl hitching down the Route several nights in
a row. Pure-bred redneck, he could tell, but . . .
Christ, she’s cute.
Faded cut-offs, halter top, sleek bare legs flashing in his headlights as
she trod the road’s gravel edge. He’d read in the county section that
prostitutes were known to hitch on the Route . . .

Gray worked in the city: 125k a year now, assistant programming
director for UniCorp. Not bad for 40. And switching him to 4-to-12s
dropped another ten percent in his pocket as a night differential. The
adjustment came easy: fewer people in the office, fewer distractions
and ringing phones—more time to work. Gray had no wife anymore
and had never really cared about a social life; the way he saw it,
work was the only way to make anything of himself.
And I have,
he
thought now. His car, in part, was proof. An onyx-black Callaway
Twin Turbo Corvette: sixty grand. A $15,000 VTL/Apogee stereo
at home. And home wasn’t shabby either, a three-bedroom luxury
condo, waterfront. The good things in life--that’s what he worked
for . . .

But at times like this, during these incalculable drives, he got to
wondering.
What else is there?
Good question after two marriages
and two divorces, plus the handful of nickel-dime relationships in
between. Women always wanted something, at least it seemed to
him.
Like I owe them a life in exchange for sex once a week.
He’d
had it up with the whole ball of wax.
I don’t need a woman in my life,
he considered, comfortable behind the padded wheel.
All I need is
me . . .

But was that really true?
There were other needs.
Four-to-12s had one more perk: no rush hour. Gray left the city at midnight, then took the Route to the interstate. With no traf
fic, he’d be
back to his condo in less than a half hour. State Route 154 was a long
winding flood emergency route through the dense woodland of south
county. It was a pretty drive, scenic—especially at night, especially
during the summer. The low moon followed him through the trees.

Crickets and peepers issued their steady, pulsating cacophony, and
the stars glimmered like luminous spillage in the sky.

And here she was again. The girl he’d seen hitchhiking several
nights in a row. The girl, and that rising need.
Yes, he’d read in the paper that prostitutes often walked the
Route, but not like the hookers in the city—they were all drugaddicts, scary in their empty-eyed stares and sleazy getups. These
Route girls, he’d heard, were just poor rubes—white trash, for the
most part—looking to make a few bucks to take back to their broken
farms. And this one here?
Just last night he’d passed her, hadn’t he? She’d been walking
just past the bend, and when Gray spotted her, something in his soul
seized up. That trampy, hick beauty glared back in the swoosh of
halogen high beams; a freeze-frame locked in his head.
Oh, man . . .
All slim curves and fine lines. Frayed cutoffs satcheled sleek,
spread hips. Pert breasts, large for a girl of her delicate frame, swayed
braless in the faded orange halter, and between that and her beltline,
Gray lost his breath at the image of her tight, sloping abdomen and
the tiny slit of bellybutton. Her face seemed to beam bright as the
halogens: big brown eyes; a small, robust mouth; a peaches-andcream complexion.
Hair the color of mature straw danced at her shoulders.
And all these details, yes, he’d managed to assess in the splitsecond glimpse as his Corvette rounded the bend. But one more
detail nicked at him, more persistent than the others, and the detail
was this: Her tanned arm extended, her thumb out.
Pick her up,
he thought.
Maybe she’ll . . .
Maybe she’ll what? Proposition you?
Was that what he was looking for?
The answer must’ve been yes, because a few tenths of a mile
later, Gray was pulling a U. His heart seemed to pick up in its beat as
he drove, scanning the lit shoulder.

Goddamn it!
When he got back to the bend, another car idled at the line—a
nicely refurbed ‘68 Camaro, ice-white. It was a small-block, with
headers and chambered exhaust. Gray could tell by the healthy
chunk-chunk-chunk
of the idle. But something in his spirit seemed to
collapse when he saw . . .
The girl was getting in. Afinal passing glimpse showed him the
driver’s face in the left window, some stubbled, long-haired redneck.
Goddamn rube probably changes tires for a living,
Gray thought in
disgust.
So that was the end of that. Or—
Maybe not.
Here she was again, tonight, hitching along the same shoulder,
barefoot, long tan legs stepping backward as she jerked her thumb
out.
Pick her up . . .
It was something like a haze in his eyes when he pulled the
Corvette right over. A shadow danced in his rearview, and then the
passenger door was opening. The shadow slipped in, bringing a
faintly musky scent in its wake. The door slunked shut.
“Hi,” Gray said.
“Ha,” she replied. That’s what her redneck dialect turned the
word “hi” into. “Wow, this, I say, this is some really nass car.”
Nass?
he thought, but then he considered the dialect again. She
was saying nice.
“Thanks. So where you headed?
“Tylersville, I means, if ya kin go all’s that way. You’s kin drops
me off ‘fore the highway ramp if ya’s cain’t go that far.”
Fuck.
Tylersville was all the way at the end of the Route, close
to ten miles probably.
“Sure,” he agreed.
What else have I got to do?
Gray thought.
Go
home? Catch the end of Leno?
“It’s not that far out of my way.”
“Thank-ya, and I’se sorry if I smell like crabs.”

The comment took him aback. “Smell like what?”
“Likes crabs. See, I’se work for Stevenson’s Crabbers. They’se
got a shack just up the Route. That’s where I’se walkin’ home from
juss now. I’se a crab-picker. See, they’se buy crabs by the bushel
down the City Dock, and we’se pick all the meat out of ‘em and
put it in containers ta sells ta the city restaurants so they’se can make
crabcakes’n newburg’n stuff. Pay’s not bad, eithers—fifty cent over
minimum wage.”
What was that? About seven bucks an hour to pick crabs in some
sweatshop all day.
I make that much in about five minutes,
he thought.
“Sounds like, uh, an interesting job.”
“Ak-shure-lee it kinda sucks,” she admitted, “but I gots a baby
an’ I don’t wanna go on the welfare.”
“Well, that’s, uh, that’s very commendable of you,” Gray
struggled for a reply.
“An’, ya know, you’ll’se see me hitchin’ home from there this
time most ever nat.”
Ever nat?
Gray tried to decipher and remembered yet again the
dialect.
Ever nat. Every night.
“Yeah, I, you know, I think I saw you last night, but—”
“I saws you too. Ain’t no way I’d ferget a nice car like this. Wish
ya’d picked me up, thoughs, ‘cos the guy who did, it was this real
cracker inna white Camaro. He weren’t very nice.”
Gray searched for a comment. What did she mean? But before
he could think of something . . .
“’Corse I do more’n pick crabs fer money, ya know.”
Silence. Gray drove with it. It was like a companion riding in the
backseat, a preceptor sitting there and waiting to see how he would
gauge and then react to the remark.
This was the moment, wasn’t it? Put up or shut up.
His groin, suddenly, felt like some burgeoning
thing,
a husky,
drooling animal dragging him around. He couldn’t control it. He
hadn’t really even looked at her since she’d gotten into the car, yet
something about her seemed to emanate: the musky, perspiry scent,
the gentle drawl of her voice, the way her lithe shadow played on the
dashboard.

“An’ I guess you knows what I’se talkin’ ‘bout,” she went on
unabashed, “’n’less that’s, like, a summer squash ya gots there in yer
pants.”

Gray, in spite of his nervousness, almost belted out a loud laugh.
It reminded him of old high school jokes. Is that the Loch Ness
Monster in your pants, or are you just happy to see me?
Shit. Some
summer squash.
Six and a quarter inches, and that was on a
good
day. But it was time, wasn’t it?
Time to get down to business.

“I’m not a cop or anything,” he felt the impulse to offer. Didn’t
they usually ask that first? He’d seen it on the cop shows and in
the movies. If they asked and a decoy cop said no, there was some
entrapment law they’d be violating? Gray wasn’t sure.

“Oh, I know you ain’t no cop,” she said and laughed lightly.
“Cops don’t drive cars like this! ‘Sides, I kin tell you’s’re a nass guy.”
Hmm.
So. I’m a nass guy.
“Well, thank you for saying so,” he said. “You’re a nice girl.”
“And I’se kin tell ya, cops ‘round these parts? They ain’t nass.
‘Specially them county sheriffs. They ain’t nass at all.”
Gray didn’t know what to say. He was too excited to pursue
small-talk. The pause that followed sounded hollow, mixed with the
big engine’s soft hum. He gulped and continued, “So, like how much
money are we talking here, and, you know . . . for what?”
Her voice didn’t hitch. “I’ll’se give ya a good blowjob fer, like,
ten bucks, if you’ll drive me all’s the way home.”
Ten bucks? Christ.
Gray was about to offer a hundred. He fished
in his pocket—there was a twenty in there somewhere. He grabbed
some haphazard bills and gave them to her.
“I don’t know what that is,” he said. “Twenty, thirty, something
like that. You can have it.”
“Dag, mister!” Her nimble hands counted the bills in the moonlight on the dash. “This here’s twennie, not ten. Plus a
five.”
“You can have it, you know, for—”
The feel of her hand on his groin silenced him. At first it felt as
though a little bird had landed there, but then the bird gave a soft rub
and then a harder squeeze. Gray nearly came.