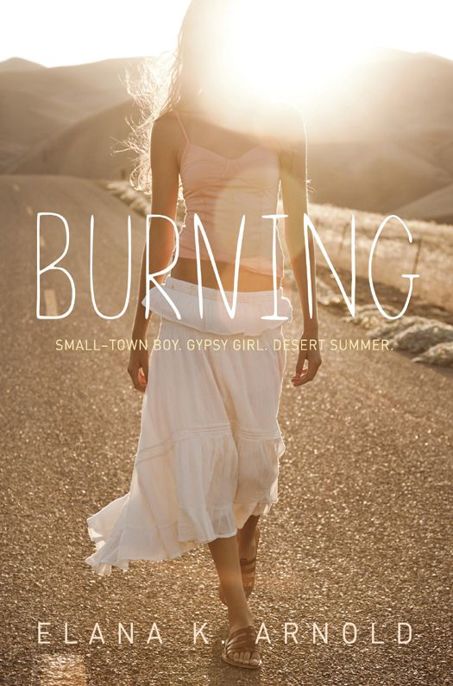 For you, Honeyman. I burn for you.

Mountains do not meet, but people do.
—Romani saying

Pete, Hog Boy, and I were spending Monday afternoon screwing around on our skateboards on the shipping dock at the deserted drywall plant. The place was creepy these days, and I could tell from Pete’s stupid jokes and Hog Boy’s extra-loud guffaws that they thought so, too, but none of us was saying it out loud.

It was ridiculously hot, well over a hundred degrees, and the air was so dry and electric that my hair felt like it was standing on end. Every breath I took burned the whole way down, hot and dry and painful. I watched Pete almost land a heelflip but miss, his board instead shooting out across the flat expanse of the concrete shipping dock and banging into a ten-foot stack of drywall sheets.

Hog Boy snorted, “Smooth!” and I caught the unconscious quick hunch of Pete’s shoulders as he jogged over to his board and flipped it up with his foot.

Pete’s board had dented one of the bottom sheets. I ambled over and examined the stack, kicking at it before kneeling down and pushing my finger into the hole his board had
created, scooping out some of the gray-white powder that had been pressed together to make this sheet.

Gypsum. Our town was built on it—built
because
of the wealth of it in our landscape, and named after it, even: Gypsum, Nevada. And it was gypsum, too, that was ending it all, because of our town’s reliance on it.

The housing bubble had burst. That was how the journalists put it, as they observed the rise and fall of the lines on their charts with detached impartiality.
Pop
. Just like that. No one’s building anymore, not when there are so many perfectly good abandoned, foreclosed homes all across the country.

When no one’s building, no one needs drywall. No drywall, no need to mine. No mine—no Gypsum.

So we had the shipping dock to ourselves this afternoon as the sun stared down at us, unblinking. Silver lining, I guess. This was a great place to skate.

“Hey, Ben,” called Hog Boy. “You gonna stand around all day jerking off or are you gonna skate?”

For Hog Boy, everything was about jerking off or getting laid or getting air. Truth was, I didn’t much feel like skating. My family—Mom, Pops, my little brother James—they were home packing boxes. I should have been home helping them. I didn’t feel like doing that, either.

But I took a deep breath like the high school counselor had told me to do and I focused my gaze on my board. The grip tape across its deck was worn and peeling in places. I’ll replace it when I get to San Diego next week, I told myself,
then threw the board in front of me and jogged toward it, jumping on and curving just before I crashed into Hog Boy.

He didn’t flinch. He never did. He just grinned that goofy grin of his, and I had to smile back. Hog Boy.

I’d known him and Pete forever—we were all Gypsum to the core. If you cut one of us open the white dust of crushed gypsum rocks would probably pour out instead of blood.

All our dads had worked at the mine—Hog Boy’s dad and my pops had been laid off along with everyone else back in January. Pete’s dad would have been laid off, too, if he hadn’t already been dead.

Hog Boy’s face was an almost cartoonish shade of red. He didn’t tan and he wouldn’t wear sunscreen or a hat, so his skin was turning to leather. A crop of white-blond hair, tightly shorn, capped his head. He wasn’t all that fat, but he was big. Packed solid. Like a well-fed hog.

I carved across the platform of the shipping dock, heading for the three-foot ramp we’d built right after the plant had closed for good back in May. I rolled up the ramp and ollied off the back side, but my heart wasn’t in it.

I felt the sticky press of my T-shirt against my back. Damn, it was hot. On days like this, it was like the sun was literally bearing down on me. I felt like some sort of depraved Atlas holding the weight of the sun on my shoulders instead of the world. I felt myself compressed by the weight of it, by the weight of everything.

“Let’s drink the beer,” I suggested, and I didn’t get an argument. We rolled to the shaded port of the shipping dock, where we’d stashed our cooler.

It was maybe a few degrees better there. I looked around the large, rectangular port. I’d been here lots of times—every summer since freshman year, until this one, I’d helped out at both the plant and at the quarry, too, just a few hundred yards from the shipping dock we were skating on. This place had been packed—forklifts, men everywhere, tall stacks of drywall being loaded onto flatbeds and carted off all across the country.

Pete handed around the beers. I pressed mine against my forehead and shut my eyes. Better. With the icy can against my skin and my eyes closed, I could imagine for just a second that I was already out of here—in Southern California, at UC San Diego, salty ocean breeze and gorgeous blondes in bikinis, every color of the rainbow.

When I opened my eyes, Pete and Hog Boy were watching me. I got the guilty feeling they knew where I’d gone for a minute—somewhere they didn’t have a ticket to.

I cracked open the can and took a long drink before squatting to the concrete.

I nodded. He already knew the plan. But he kept coming back to it, again and again, as if he were looking for some loophole that could keep it from coming true.

“Yep,” I said. “I’ll help my folks get their stuff to their new place in Reno, and then they’ll drop me off at the bus stop.”

Strange to think of my family without me, and in a new city. All my life I’d seen them in the same context—in the boxlike wood-planked house we’d always lived in, two bedrooms, one bathroom, and a postage stamp of a living room
where we ate and watched TV. But the mining company owned all the houses in town. They owned the only store, too, and even the two churches, one Baptist, one Protestant. And nothing—not our homes, not the schools, not even the churches—was exempt from the town closure. In a week it would all be boarded up. Fat rolls of chain link waited just at the edge of town. Once we were out, the entire town would be surrounded by it.

And then what? Our lawns would die, first of all. The smartest people had already left over the last year or so, knowing that our country’s bad economy spelled bad news for our gypsum mine. Those of us still here were the die-hards, those who hadn’t wanted to believe the writing on the wall until it was too late to ignore it any longer. We kept watering and weeding and mowing even though we all knew our days here were numbered. Once we left, the desert would reclaim our little plots of yard in no time. By the end of September there’d be no green left.

Without fresh paint our houses wouldn’t look neat and tidy for long, either. Desert weather is merciless. The buildings would splinter soon enough.

Then the sidewalks we’d ridden our bikes on and the streets where we’d learned to drive would crack and buckle and disappear into the desert landscape, too.

I tried to turn my thoughts to less depressing things. I pictured the road map in my head, the one I’d studied many times since reserving my seat on the three p.m. Greyhound bus out of Reno: the first stretch, west from Reno on Interstate 80, then a transfer in Sacramento at six-thirty in the
evening. I’d sleep on that second bus, and when I woke up the next morning I’d be in San Diego. New day, new life.

My friends didn’t want to hear about my road trip, though, so I turned to Pete. “What about you and your mom? Did you guys figure out what you’re going to do yet?”

Pete shook his head and bit his lip. It was a bad habit of his, one he’d had all his life. I remember him doing it back in kindergarten, picking at and chewing on that same spot on his lip until it bled. There was a permanent divot there in his bottom lip, right in the middle, from all the times it’d broken open and scabbed over.

Other than that, Pete was definitely the best-looking guy in our little school. He was romantic-looking, I guess, in a way girls seemed to go crazy for. The only one of us with a steady girlfriend, he was tall and kind of angular, not really muscular but well built anyway, and I’d heard Cheyenne and Becca talking about how his eyes were “smoldering.”

Maybe they were. I sure as hell didn’t know about that. But if they
did
smolder, it was probably on account of all the shit he’d crawled through in his eighteen years.

We all knew each other’s stories in Gypsum, and no one in town seemed opposed to mulling over what should have been the secret lives of its residents. So no one thought twice about discussing how Pete’s dad, Jerry, had fought a long, ugly battle with lung cancer, taking way too long to die, or how his mom, Kathy, had distracted herself from her sadness by friending her old high school flame on Facebook. Everybody knew—and had a definite opinion about—how Kathy
had been out of town the weekend Jerry had finally taken his last breath just over three years ago. Pete had found him.

The town was divided over whether or not Kathy should have moved away from Gypsum after that. The mean gossips said that the Facebook guy had dumped her, so she had had no choice but to stay in Gypsum. The nicer ones held the theory that Jerry’s death had snapped her back to her senses, and that
she
had dumped
him
so she could focus on raising Pete and seeing him graduate high school.

Pete wasn’t saying, and I can’t say I really wanted to know the truth. When you grow up in a town of 489 people, you get pretty tired of hearing about everyone’s dirty laundry. But I couldn’t ignore the look that had come into Pete’s eyes during the months that surrounded his father’s death.