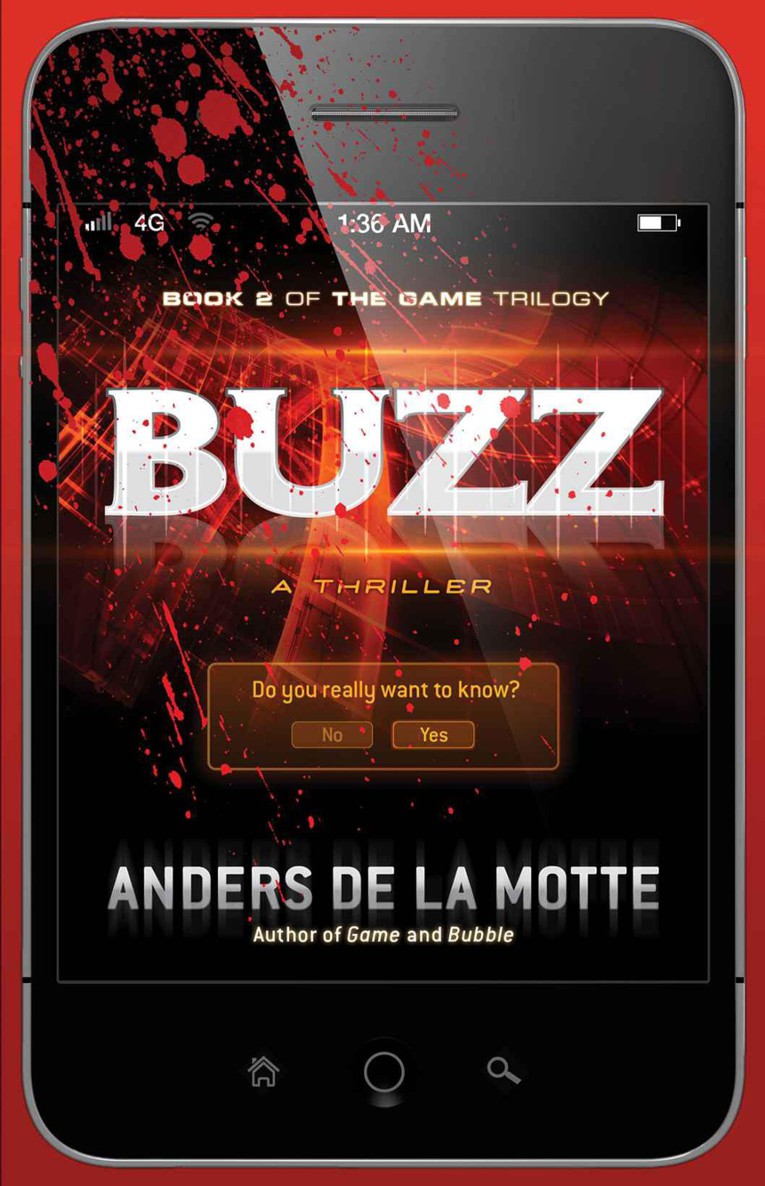 Thank you for downloading this Atria Books/Emily Bestler Books eBook.

MY WARMEST THANKS
to all the Ants out there, without whose advice and achievements the Game could never have become a reality.

To leave, to get away from your current situation

Something that creates excitement, hype or a thrill!

A rush or feeling of energy, excitement, stimulation or slight intoxication

The verb used when posting something (mainly on Google buzz)

To clip, to cut, to shave, to remove, to mow

A method of obtaining immediate attention

Being overly and unnecessarily aggressive

A continuous noise, as of bees; a confused murmur, as of a general conversation in low tone

A whisper; a rumor or report spread secretly or cautiously

The speed of communication is wondrous to behold. It is also true that speed can multiply the distribution of information that we know to be untrue.

Nothing travels faster than light, with the possible exception of bad news, which follows its own rules.

About four weeks ago I found a cell phone on the train. A nice, shiny one—brushed steel with a glass touch screen. It pulled me into a chain of events that came to an end out in Torshamnsgatan a few days ago, and I’d like to tell you about it.

My name is Henrik Pettersson, HP to my friends, and I’m 31 years old. (I don’t really see what my age has got to do with anything, but you lot seem obsessed with how old people are, so there you go.)

By now the mention of Torshamnsgatan should have set a few alarm bells ringing, seeing as that was where the bomb went off and killed some people. The bomb that
was actually intended for someone else entirely. (I’m not going to write their name, you know who I mean and you never know what sort of surveillance filter might pick up this email . . .)

Back to the cell phone on the train:

It invited me to play an Alternate Reality Game, but it turned out that the boundaries between fantasy and reality were a little blurred. I was given little tasks to carry out, and told to film them with the phone at the same time. And those tasks earned me points, giving me a ranking on a high-score list, where my performance could be judged by people watching online. And I was offered money if I succeeded.

It all sounded cool, so I signed up pretty quickly.

But this particular Game turned out to be way more real than I had imagined.

Try googling the weird shit that’s been going on in the last few weeks!

That police car that crashed at Lindhagensplan, an abandoned house going up in flames out in Fjärdhundra, not to mention what happened to the royal procession in Kungsträdgården . . .

It’s all linked to the Game.

Easy—I was responsible for it all.

I got off on the buzz, the feeling that I had an admiring audience out there in cyberspace. Giving me cred for all the things I was doing. And like the sad little approval junkie that I am, I let myself get dragged into it without
protest. I shifted the boundary of what I thought was acceptable so far that I couldn’t actually see it anymore. I even managed to harm those closest to me . . .

Pathetic, isn’t it? How the hell could anyone do something like that, just to get a bit of public recognition? But take a look at yourselves. How many of you have got Facebook, Twitter, or Instagram open in another window as you’re reading this email? Running them as apps on your cells and checking them compulsively from the moment you wake up until you fall asleep? My guess is: all of you.

The whole damn lot of you.

So you’re not exactly in a position to judge me!

I’m sure you’ll do your job properly, so I might as well tell you now: I’ve got a sister, Rebecca Normén, she’s a bodyguard with the Security Police. Yes, THAT Rebecca Normén . . . You’ve probably written loads about her in the last few days. What with the medal and everything.

Becca’s good at her job, she’s a good bodyguard. A damned good one, actually. Which isn’t all that surprising, seeing as she’d been in training her whole life, since we were little. She always looked after me. Except for one time when I stepped in and saved her life. Took a bullet for her.

Somehow the Game Master managed to take advantage of our fucked-up relationship, and got me to subject Becca to things I’d rather forget.

She isn’t involved in the Game, at least not the way I
am. In fact she even doubts that the Game really exists. But like Verbal Kint says in
The Usual Suspects:

The greatest trick the devil ever pulled was convincing the world he didn’t exist.

Anyhow, I’ve given you enough, so get digging.

Check out who really owns that pile of ruins out on Torshamnsgatan. ACME Telecom Services Ltd. is just a front. The setup out there was used to control the Game. Collecting information, sending out tasks, and letting other people bet on the outcome.

Start by finding out what happened to Erman, the IT genius who installed the servers. It’s not a pretty story . . .

But once you’ve been dragged in there’s no way out.

Talk to my old BFF, Magnus Sandström, who almost had his computer shop burned out (but call him Farook or he’ll get upset). Then throw in all the weird stuff that keeps happening. Computer systems that just shut down, sabotage, unexplained thefts. People vanishing—or being killed . . .

Put the pieces of the puzzle together, think big! Then even bigger!

You’ve got a lot of work ahead of you, but once you’ve got to the bottom of this you won’t believe your eyes.

They’ve been playing for years,
poor Erman told me. And I’m sure that’s true.

Be careful—the Game Master’s got eyes and ears
everywhere, and will do everything in his power to stop you.

ps. Don’t waste time looking for me. I’m long gone by now. Somewhere no one will ever find me.

Not even the Game Master.

This message did not reach its intended recipients.

It was rerouted and removed by the administrator on July 26 at 23:43.

SHE HAD BEEN
awake just a few seconds when she realized that the man was behind her. That he must have been standing there for a long time under the scorching sun while he waited for her to come around.

She had been dreaming about a Ghourab Al-Bain—a scrawny little desert raven with shimmering, blue-tinged feathers that had been sitting not far from her on the sand. The bird had tilted its head and looked at her curiously with its peppercorn eyes, almost as if it was wondering what she was doing out there all on her own.

She didn’t actually know if she had imagined it, or if a real raven had chosen to take a closer look at her inert body.

But, real or not, the bird was gone now—possibly scared off by the man’s silent presence?

His return could mean only one thing.

Suddenly she was wide awake—her pulse was pounding against her eardrums.

She took a deep breath before slowly twisting her head to look in the man’s direction.

The sun was reflecting off the object in his hand, blinding her and making her instinctively raise one arm to her sunburned forehead.

And at that moment she realized that the Game was over.

HE WAS ON
her in two quick strides.

She didn’t even have time to react before he had dragged her out of her chair. Her back against the wall, one of his hands in an unshakeable stranglehold around her throat—so hard that the tips of her toes began to lift from the soft carpet.

There was a clatter of porcelain and gasps of horror from the other diners—but he didn’t care. The lounge was on the sixth floor and it would be at least three minutes before the security staff got there. And three minutes were more than enough for him to do what he had to.

She was gurgling, desperately trying to ease his grip, but he tightened it instead and felt her resistance draining away. The color of her immaculately made-up face dropped from bright red to chalk white in a matter of seconds, suddenly matching her little pale suit.

He released his grip enough to let a small amount of blood reach her brain, while he fumbled for the object on the table with his free hand. A sudden badly aimed kick at his crotch made him jerk, but she’d lost one of her shoes and without Jimmy Choo’s help the kick wasn’t hard enough to make him
loosen his grip. He tightened it again and pressed his face right next to hers. The terror in her eyes was oddly satisfying.

“How the fuck did you find me?” he hissed, holding the cell up in front of her eyes. A shiny silvery object with a glass touch screen.

Suddenly the phone burst into life. Out of reflex he held it farther away from him, and to his surprise saw his own face reflected in the screen. Staring, bulging eyes, sweaty, bright-red face. The cell must have a camera on the other side because when he moved his hand her terrified, pale face moved into the shot. Beauty and the blasted beast, in podcast!

What the hell was he actually doing?

He was supposed to be a superhero, a savior of worlds—but this? Attacking a woman? Had he really sunk so low?

He met her gaze again, but this time the fear in her eyes merely made him feel empty.