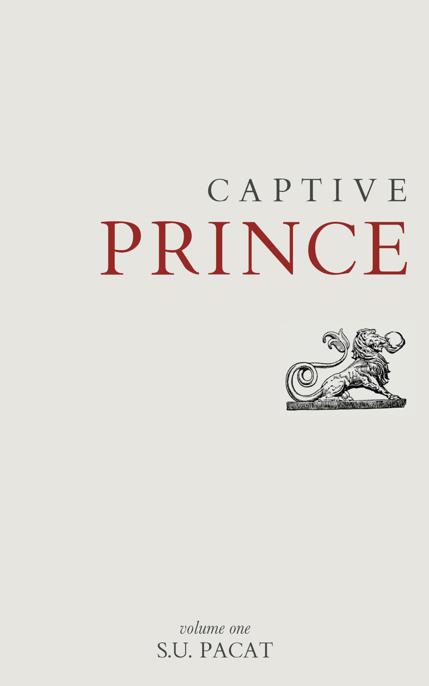 The Training of Erasmus

S. U. Pacat is a writer who has lived in a number of different cities, including Tokyo and Perugia. Right now she lives in Australia, where she is working on the third and final book in the
Captive Prince
trilogy.

The right of S. U. Pacat to be identified as the sole author of this work has been asserted. All rights reserved worldwide. Without limiting the rights under copyright reserved above, no part of this publication may be reproduced, translated, stored in or introduced into a retrieval system, or transmitted, in any form or by any means (electronic, mechanical, photocopying, recording or otherwise), without the prior permission of the copyright holder.

Captive Prince
is dedicated to all the original readers and supporters of the story. Your encouragement and enthusiasm is what made this book possible.

Thank you all so much.

KASTOR, illegitimate son of Theomedes and Damen’s half brother

ADRASTUS, Keeper of the Royal Slaves

LYKAIOS, a female slave in the household of Damianos

THE REGENT of Vere

LAURENT, the heir to the throne of Vere

RADEL, overseer of the Prince’s household

GUION, a member of the Veretian Council and Ambassador to Akielos

AUDIN, a member of the Veretian Council

GOVART, a former member of the King’s Guard

JORD, a member of the Prince’s Guard

ORLANT, a member of the Prince’s Guard

TORVELD, younger brother of Torgeir and Ambassador to Vere

AUGUSTE, former heir to the throne of Vere and Laurent’s older brother

‘W
E HEAR THAT
your Prince,’ said Lady Jokaste, ‘keeps his own harem. These slaves will please any traditionalist, but I have asked Adrastus to prepare something special in addition, a personal gift for your Prince from the King. A gem in the rough, as it were.’

‘His Majesty has already been so generous,’ said Councillor Guion, the Ambassador of Vere.

They strolled the length of the viewing gallery. Guion had dined on mouth-watering spiced meats wrapped in grape leaves, the noon-day heat fanned away from his reclining form by attentive slaves. He felt generously willing to admit that this barbaric country had its charms. The food was rustic but the slaves were impeccable: faultlessly obedient and trained to efface and anticipate, nothing like the spoiled pets at the court of Vere.

The gallery was decorated by two dozen slaves on display. All were either naked or barely clad in transparent silks. Around their necks, the slaves wore gold collars decorated with rubies and tanzanite and on their wrists golden wrist-cuffs. These were purely ornamental. The slaves knelt in demonstration of their willing submissiveness.

They were to be a gift from the new King of Akielos to the Regent of Vere—a highly generous gift. The gold alone was worth a small fortune, while the slaves were surely some of the finest in Akielos. Privately, Guion had already earmarked one of the palace slaves for his personal use, a demure youth with a beautifully slender waist and heavily lashed dark eyes.

As they reached the far end of the gallery, Adrastus, the Keeper of the Royal Slaves, bowed sharply, the heels of his laced brown leather boots drawing together.

They proceeded into an antechamber, and Guion’s eyes widened.

Bound and under heavy guard was a male slave unlike any Guion had ever seen.

Powerfully muscled and physically imposing, he was not wearing the trinket-chains that adorned the other slaves in the gallery. His restraints were real. His wrists were lashed behind his back and his legs and torso were bound with thick cords. Despite this, the force of his body looked only barely contained. His dark eyes flashed furiously above the gag, and if you looked closely at the expensive cords that bound his torso and legs you could see the red weals where he had fought, hard, against his restraints.

Guion’s pulse sped up, an almost panicked reaction. A gem in the rough? This slave was more like a wild animal, nothing like the twenty-four tame kittens who lined the hall. The sheer power of his body was barely held in check.

Guion looked at Adrastus, who was hanging back, as though the slave’s presence made him nervous.

‘Are all the new slaves bound?’ asked Guion, trying to regain his composure.

‘No, just him. He, that is—’ Adrastus hesitated.

‘He isn’t used to being handled,’ said Adrastus, with an uneasy sideways look at Lady Jokaste. ‘He hasn’t been trained.’

‘The Prince, we hear, enjoys a challenge,’ said Lady Jokaste.

Guion tried to quell his reaction as he turned his gaze back to the slave. It was highly questionable whether this barbarous gift would appeal to the Prince, whose feelings towards the savage inhabitants of Akielos lacked warmth, to say the least.

‘Does he have a name?’ asked Guion.

‘Your Prince is, of course, free to name him whatever he likes,’ said Lady Jokaste. ‘But I believe it would greatly please the King if he were to call him “Damen.”’ Her eyes glittered.

‘
Lady Jokaste
,’ said Adrastus, seemingly in objection, though of course that was impossible.

Guion looked from one to the other of them. He saw that he was expected to make some comment.

‘That is certainly—an interesting choice of name,’ said Guion. In fact he was appalled.

They killed his slave Lykaios with the quick slice of a sword across her throat. She was a palace slave, untrained in combat and so sweetly obedient that, had he commanded it of her, she would have knelt and bared her own throat for the stroke. She was not given a chance to obey or resist. She folded soundlessly, her pale limbs lying quite still on the white marble. Beneath her, blood began slowly to spread out over the marble floor.

‘Seize him!’ said one of the soldiers that poured into the room, a man with lank brown hair. Damen might have allowed it simply out of shock, but it was in that instant that two of the soldiers lay hands on Lykaios and cut her down.

At the end of the first exchange, three of the soldiers were dead, and Damen had possession of a sword.

The men facing him wavered and held back.

‘Who sent you?’ said Damen.

The lank-haired soldier said, ‘The King.’

‘Father?’ He almost lowered his sword.

‘Kastor. Your father is dead. Take him.’

Fighting came naturally to Damen, whose abilities were born of strength, natural aptitude and relentless practice. But these men had been sent against him by one who knew all of that very well, and further, was not stinting in his judgement of how many soldiers it would take to overcome a man of Damen’s calibre. Overwhelmed by numbers, Damen could only last so long before he was taken, his arms twisted behind his back, a sword at his throat.

He had then, naively, expected to be killed. Instead he was beaten, restrained and—when he fought free, doing a gratifying amount of damage for one who had no weapon—beaten again.

‘Get him out of here,’ said the lank-haired soldier, wiping the back of his hand across the thin line of blood at his temple.

He was thrown into a cell. His mind, which ran along straight and candid lines, could not make sense of what was happening.

‘Take me to see my brother,’ he demanded, and the soldiers laughed and one kicked him in the stomach.

‘Your brother’s the one who gave the order,’ one of them sneered.

But the door of his cell slammed shut, and doubt raised its head for the first time.

He had been naive, a small voice began to whisper, he hadn’t anticipated, he hadn’t seen; or perhaps he had refused to see, giving no credence to the dark rumours that seemed to disrespect the honour with which a son should treat the final days of a sick and dying father.

In the morning they came for him, and understanding now all that had occurred, and wishing to meet his captor with courage and bitter pride, he allowed his arms to be lashed behind his back, submitting to rough handling and moving forward when he was propelled by a hard shove between the shoulders.

When he realised where he was being taken, he began to struggle again, violently.

The room was simply carved in white marble. The floor, also marble, sloped faintly, terminating at an unobtrusive carved runnel. From the ceiling hung a pair of shackles, to which Damen, forcefully resisting, was chained against his will, his arms pulled up above his head.

These were the slave baths.

Damen jerked against the restraints. They didn’t budge. His wrists were already bruised. On this side of the water, a miscellany of cushions and towels were arranged in an appealing tumble. Coloured glass bottles in a variety of shapes, containing a variety of oils, glimmered like jewels amid the cushions.

The water was scented, milky, and decorated with slowly drowning rose petals. All the niceties. This could not be happening, Damen felt a surge in his chest; fury, outrage and somewhere buried beneath these a new emotion that twisted and roiled in his belly.