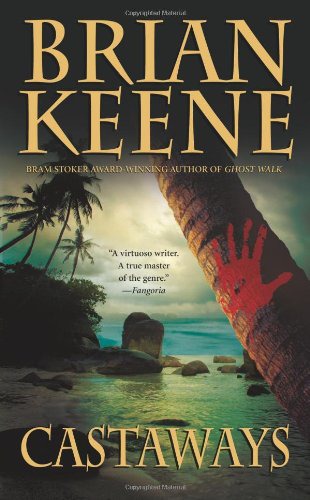 Other
Leisure
books by Brian Keene:

THE CONQUEROR WORMS CITY OF THE DEAD THE RISING

This book is dedicated to the memories of Richard Laymon, Dan "UK" Thomas, and Bruce "Boo" Smith. We miss you guys...

A LEISURE BOOKÂ® February 2009 Published by

The name "Leisure Books" and the stylized "L" with
design are
trademarks of Dorchester Publishing Co., Inc.

If you purchased this book without a cover you should be aware that this book is stolen property. It was reported as "unsold and destroyed" to the publisher and neither the author nor the publisher has received any payment for this "stripped book."

Visit us on the web at
www.dorchesterpub.com
.

As always, thanks to: my family; everyone at Leisure Books; my pre-readersâ€”Tod Clark, Kelli Dunlap, and Mark 'Dezm' Sylva; and to my loyal readers and the members of the F.U.K.U.

Becka knew she was going to drown. Gasping, she filled her lungs as another massive wave forced her below the churning turquoise waters. As she plunged downward, all sound ceased, except her heartbeat pounding in her ears. The saltwater irritated her eyes. The light dimmed. Her muscles ached and her lungs burned as she sank lower. Despite the pain, she kicked and thrashed. Bubbles ringed her body like a halo. Becka's headache, which had tormented her for the last few days, throbbed in steady time with her pulse. She'd spent the last two weeks with very little food or water. Now exhaustion, dehydration, and hunger were taking their toll on her.

She should have never applied for
Castaways.
Watching it on TV every week was very different from actually competing in the show. Watching it didn't require pain or sacrifice or pushing your body to its limits.

What was she doing here, drowning in the waters off an uninhabited South Pacific island? Was being on television or a chance at the million-dollar prize

worth all this? It was insane. She couldn't do this. She'd applied on a whim, never believing she'd actually make the final cut. She'd filled out the online application, but so had a million and a half other people. There was no way she should have been picked. Yet here she was, one of the twenty who'd been selectedâ€”a twenty-two-year-old Penn State graduate who still lived with her parents because she couldn't find a job. A month ago, she'd been at home, attending employment fairs and desperately trying to find herself. Find
anything.
Now she was here, in the most beautiful place she'd ever seen, and Becka was so tired and demoralized that she couldn't even enjoy it.

She was tempted to just close her eyes, exhale, and slowly drift to the bottom of the sea. The other people on the island craved fame or notoriety or wealth. Let them have it. She didn't want those anymore. Maybe she had at one point, even if it was just a whim. Otherwise she wouldn't be here. Now all Becka wanted was oblivionâ€”the blessed bliss of unconsciousness. The smothering kiss of death. A very long sleep.

The water felt like a blanket, snuggly and comforting.

Becka closed her eyes and let the blanket engulf her.

Her depressed futility gave way to a sense of frustration and competitiveness. Screw it. She hadn't come all this way just to give up now. She was in this to win. No matter how much she hurt, there was no

retreat, no surrender. Not yet. Her family and some of her friends would understand if she quit, but they weren't the only people Becka had to worry about. There were othersâ€”the countless, faceless millions on the Internet, eager to log on and share their opinions and critiques on countless trivial pop culture icons, including her. A month ago, she'd been nobody, with a grand total of eight subscribers to her blog. After this aired, her face and name would be recognized by everyone in America who owned a television or read the newspapers. She was a reality television starâ€”or would be, once this aired.

In just a short time, Becka had learned what other public figures before her had known, as wellâ€”fame or infamy (because the two were often synonymous) sucked in equal measure. You craved them until you got them, and then you didn't want them anymore.

And she didn't even have them yet.

But there was no going back.

Spurred by anger, Becka gritted her teeth and kicked hard for the surface. A vibrant rainbow of tropical fish darted around her, chased by a grayish white sea snake with prominent dark bands encircling its body. Becka paused. Eyeing the serpent's paddle-shaped tail, she tried to remember if this particular type of sea snake was venomous. Before her arrival, she'd studied the Pacific Islands as best she could, memorizing the flora and fauna. Despite all her preparation, she couldn't recall whether this one was poisonous. Becka gave the sea snake a wide berth, just to be safe. Ignoring her, the serpent continued pursuing the fish. A stingray glided by, oblivious to both Becka and the other marine life, or

perhaps indifferent. She stared at it, carefully avoiding the barbed tail.

The aching in her oxygen-starved lungs grew stronger. Above her, Becka saw the wiggling legs of the other castaways. She swam toward them. Her head broke the surface. Coughing, she spat saltwater and gasped for air. Her throat was sore. The sun was blinding. Waves buffeted her about. Another big one almost sank her, but she fought to stay afloat. Blinking the water from her eyes, she glanced around.

A television camera stared back at her.

Ignore it,
she thought.
It doesn't exist. Remember that. I'm supposed to pretend it isn't there.

Becka treaded water next to a small boat. On board were four menâ€”a camera operator, a sound engineer, a field producer, and a pilotâ€”all network employees. As Becka coughed, they merely glanced at her, impassive. They didn't speak or even nod in acknowledgment. Becka drifted away from the craft, debating whether she should break the rules and ask for assistance. Contestants weren't supposed to talk to or interact with the crew unless it was a dire emergencyâ€”or unless the crew initiated the contact.

"Think they'll give us a ride?"

Jerry treaded water beside her, droplets rolling off his shaved head and chest. Like Becka, he was in his early twenties and in impressive physical shape. He was cute, and she'd noticed him checking her out several times since they'd arrived on the island two weeks ago. She didn't know much about himâ€”just that he owned a video store in Santa Monica, California. Under different circumstances, Becka might have considered getting to know him better, but

there was no time for that out here. It was every man or woman for themselves. Confiding in the wrong person or trusting someone just a little too much led to disaster. After twelve seasons of
Castaways,
even a novice knew that.

"Give us a ride?" She struggled to catch her breath. "You know the rules. Initiating contact with the crew means immediate disqualification from theâ€”"

Jerry held his hands up. "I know, I know. Jesus, Becka, I was just kidding."

Another wave crashed over them. Becka fought to keep from swallowing more water. This wave was smaller than the last, and she managed to stay afloat. The two of them bobbed up on its crest and then back down again as it rolled past.

Three times a week, Becka and the other castaways had to compete against one another in a series of contests and challenges. Sometimes they were physical. Other times the puzzles focused on intelligence and wits, or trivia based on the region where the current game was being played. The winner of the challenge gained temporary access to the circle of protection and was safe until the next challenge. The other castaways would then select someone to exileâ€”meaning the chosen person was ejected from the game. Any contestant was eligible for exile, with the exception of whoever had won the circle of protection.

For today's challenge, they'd been brought offshore by boat and then told that they had to race to shore. Now that Becka had surfaced, the other castaways were swimming away again, leaving just her, Jerry, and the camera crew on the small boat.

Becka frowned. "Shouldn't you be trying to finish the race?"

"Yeah. Pompous Brit bastard. Jeff and Richard were right on his ass the whole way. All three made it to shore at the same time, but Stefan crossed the finish line first. He's got his place in the circle of protection now, so somebody else will have to go home tonight."

Becka's response was cut off by another bout of coughing. "You okay?"

She immediately regretted revealing her weakness to him. Now, if he wanted to, Jerry could exploit it to advance his own standing in the game.

"This?" He grinned, dog-paddling. "This is nothing. Just some minor swells."

"I thought there was a storm coming. That's what one of the crewâ€”Mark, the guy with the mulletâ€” said earlier."

"Maybe." Jerry glanced up at the sky. "But the sun is out and there ain't a cloud in the sky. These aren't storm waves. The sea is choppy, sure, but it's nothing to worry about. I surf waves bigger than this

all the time back in Santa Monica. Hang on to me and I'll get us both to shore."

"I'll be okay. It's just... I had a bad experience in a swimming pool when I was little. My brother pushed me in the deep end when I was like four years old. The water scares me a little bit, but I'll make it."

The boat's engine throttled up, and the small craft raced ahead. The camera crew's lenses were now trained on Pauline and Roberta. Coughing, Becka watched the two women swimming toward shore and felt a twinge of jealousy. Even Roberta, a middle-aged librarian, was doing better than she was.