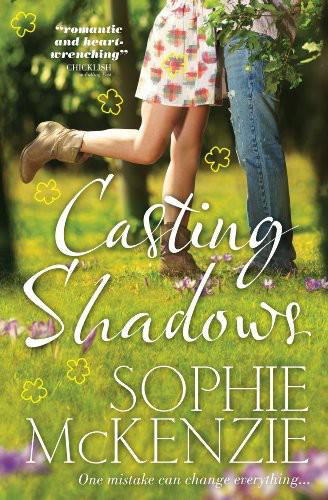 SIX STEPS TO A GIRL

THE ONE AND ONLY

THE MEDUSA PROJECT 1:
THE SET-UP

THE MEDUSA PROJECT 2:
THE HOSTAGE

THE MEDUSA PROJECT 3:
THE RESCUE

First published in Great Britain in 2013 by Simon and Schuster UK Ltd,
a CBS company.

The right of Sophie McKenzie to be identified as the author of this work has been asserted by her in accordance with sections 77 and 78 of the Copyright, Design and Patents
Act, 1988.

This book is a work of fiction. Names, characters, places and incidents are either the product of the author’s imagination or are used fictitiously. Any resemblance to
actual people living or dead, events or locales is entirely coincidental.

Flynn and I sat at the table by the window, waiting. We were still at Café Yazmina, though my daytime shift had finished over an hour ago.

The window was open and a light breeze filtered in, cooling my face. The closer we got to Dad’s arrival, the more churned up I felt. Flynn reached across the table and squeezed my hand.
‘It’s going to be fine,’ he said.

I nodded, not feeling convinced. I fingered the tiny silver heart on the chain bracelet he’d given me.

‘We’ll help,’ my friend Grace said from across the table.

‘That’s right.’ Her boyfriend, James, sat beside her, his arm draped loosely across her shoulders.

I looked at them both, then at Flynn’s determined face. Around us the café was filling up for dinner, despite the early hour. A large party had just walked in and the waiting staff
were busy putting tables together to seat them.

‘There’s nothing to worry about,’ Flynn said with a grin. ‘James is even prepared to say I’m his role model.’

‘Role model for being a git,’ James grunted.

Once Dad knew how much effort Flynn had put into dealing with his anger problems, he’d surely be happy for me to go out with him again.

‘How long till your dad arrives?’ Grace asked, twirling a lock of her blonde hair around her finger.

I checked the clock on the wall. It was almost 6.20 p.m. ‘Ten minutes or so.’ As I spoke, Yazmina – the owner of the café – bustled over, a huge presence in her
flowing, glittery skirt and long, tasselled earrings. She smiled down at us then waved expansively at the room behind us. Her bangles jangled.

‘We are very busy,’ she drawled, flashing her white teeth in a big smile. ‘River, I know you have finished your shift, and you are changed now into your own clothes, but might
you help for a few minutes?’

I followed her gaze to the table across the room, where the people from the large party were sitting charting to each other.

‘Just to serve the meze . . . the starters,’ Yazmina went on. ‘Only for a few minutes. You will finish before your father arrives, yes?’

I hesitated. I didn’t mind helping out at all, but I’d been so focused on what I was going to say to Dad that it was hard to adjust back into service mode.

‘I’ll do it.’ Flynn stood up. ‘If your dad arrives early, he’ll see me working. That’ll help make a good impression.’

I smiled at him gratefully and sat back in my chair as Yazmina glided away with Flynn following.

It was the end of June, a hot, close Friday evening. Flynn and I had been going out since last October. But back in January Flynn had hit his da and broken his nose. His da’s a drunk who
used to beat Flynn’s mum and terrorise the rest of the family. After Flynn attacked his dad, his mum had gone back to her home in Ireland with Flynn and his sisters.

It was terrible being apart from each other and, at the beginning of March, Flynn had come back to London on his own. Since then he’d been working hard, sleeping on friends’ sofas
and studying in his spare time. He’d also been seeing a counsellor about his temper – that was my condition for going back out with him. Flynn hadn’t liked the idea at first but
he’d found a free service through his old school, where one of the tutors had also helped him organise everything he needed to take his exams.

And it had worked. I hadn’t seen Flynn fly off the handle for almost three months. Well, I didn’t see Flynn at all for the first few weeks – he insisted it was the only way to
prove he had changed – though we’d sent each other texts most days. We started meeting up again at the very end of the Easter holidays and, once we’d seen each other, it was just
too hard to keep apart. To be honest I think it helped me to know that Flynn was there, always ready to listen when I got bored of my revision or to give me a hug when I complained I was never
going to pass Maths or Science.

I’d only been back at school for a few weeks before study leave started, after which my GCSEs kind of took over everything for a while. Flynn was perfect through that whole time. He always
insisted I should do my work before we met up, revising hard for his own AS levels too. He never once overreacted or got angry about anything. I was impressed – and surprised, though I
shouldn’t have been. Flynn’s the most determined person I’ve ever met. Once he decides to do something, nothing will stop him.

Still, I hated our relationship being secret. Mum and Dad had forbidden us to contact each other back in January. As far as they were concerned, Flynn was still in Ireland. We’d kept his
return ultra secret. Of our old friends, only James, Flynn’s best friend, and Grace knew he was here – and we’d only told them about a month ago. Our plan was to introduce Flynn
to Dad properly – they’d only met very briefly until now – then explain about his counselling sessions, his various jobs and his efforts to keep up with his schoolwork in the
evenings. James and Grace were going to add their own character references.

Dad was such a forgiving old hippy, I couldn’t believe he wouldn’t accept Flynn back in my life. And once I had him on side, we’d go on and approach Mum.

James got up to go to the toilet. As he passed Flynn, he said something quietly. Flynn turned, bending closer to catch the whisper. His fringe flopped over his eyes and he grinned at whatever
James was saying.

I stared, transfixed by his face. It was partly the way his nose sloped, the way his lips curved. But it was more than that too. Flynn’s face was so mobile, so expressive. I never got
tired of looking at it.

I watched Flynn stroll towards the kitchen. He moved with just a tiny hint of a swagger – all tall and lean and rangy and sure of himself.

‘You really love him, don’t you, River?’ Grace said timidly.

I blushed. ‘He’s really different now, Grace.’ I turned to her. ‘You can see that, can’t you?’

Grace gave me a quick, shy nod but she turned away as she nodded, her sleek blonde bob swaying across her cheeks, hiding her face. It wasn’t exactly a wholehearted endorsement but I
didn’t expect her to understand. Grace is lovely but she’s never felt comfortable around Flynn. I think he’s too intense for her. Too edgy.

I looked over again as Flynn re-emerged from the kitchen, a row of plates balanced along his arms. As he placed each one carefully on the table of eight, the rounded cut of the muscles on his
upper arm showed for a second through his white shirt. It was crazy. I’d known him for nine months and my knees still buckled when I looked at him across a room. Flynn laid the last plate
down and went back to the kitchen. Grace would never understand but it was precisely Flynn’s intensity that I loved. I mean, he came back to London to be with me. He said – says –
that I’m all that matters to him.

I spun round. A middle-aged guy from one of the corner tables was standing in front of me, scowling.

I stared at him blankly.

‘I heard the lady saying you worked here and I’d like some salt.’ He said it slowly, in the sort of voice you might use on a really stupid person. ‘There’s none on
our table and the other staff seem to be busy.’

‘Sure,’ I said, rising to my feet, ignoring the irritation I felt at his rude tone. ‘I’ll fetch some.’

I scuttled into the kitchen, almost colliding with Flynn on his way out. He was now carrying a basket of pitta bread in each hand.

The two male cooks were busy arguing on the far side of the kitchen. The scent of cardamom from the stew they were making wafted towards me.

‘Slow down yourself,’ I said, smiling back.

Flynn moved closer. ‘Well, as you’re here . . .’ He drew even nearer, his eyes like gold discs in the bright, overhead kitchen light.

I stood on tiptoe and kissed his mouth.

I’d meant to just brush his lips, to make it a light kiss, but once I felt him kiss me back I didn’t want to stop. I put my arms round his neck and pulled him closer. He groaned. His
hands were still full of the pitta baskets but I could hear the sound of bread dropping onto the floor. I smiled and kissed him harder, forgetting where we were. Forgetting the guys cooking in the
corner of the kitchen. Forgetting all the people waiting outside in the café.

Cowboy's Chocolate Roses by Jess Buffett
Before Another Dies by Alton L. Gansky
No One's Chosen by Randall Fitzgerald
Love That Dog by Sharon Creech
Peligro Inminente by Agatha Christie
Forbidden Fruit by Ann Aguirre
A Regency Christmas My Love by Linda Hays-Gibbs
The Tender Flame by Al Lacy
The Fly Boys by T. E. Cruise
The Lord Of Misrule by House, Gregory