I write about it in this book. I chose myself. And you will also.

THE ECONOMIC HISTORY OF THE CHOOSE YOURSELF ERA

For the past five thousand years, people have been largely enslaved by a few select masters who understood how violence, religion, communication, debt, and class warfare all work together to subjugate a large group of people.

The Gutenberg printing press was the first crack in the prison. It allowed people to start breaking out of their solitary confinement cells by spreading ideas across large distances, and allowing those ideas to mate with one another. This resulted first in the Renaissance, then the Protestant Reformation, and ultimately enough discoveries in science to ignite the Industrial Revolution.

But the Choose Yourself era had its direct roots in World War II. And basically, women brought it on.

In World War II, 16 million American men left the United States in order to kill people. Meanwhile, someone needed to work the factories and offices to keep the country running. Women stepped in and filled the task.

When the men came back, the women, quite correctly, realized that they didn’t want to just stay at home anymore. They wanted to work and contribute and make money. Making money was fun and it gave them independence.

For the first time in about thirty years, Americans had money. A lot of it. And American industrialization was spreading throughout the world. Before long the US controlled the global economy. Global conglomerates rose from the ashes of near-bankrupt companies that barely survived the Great Depression.

For the first time in decades, Americans didn’t have to worry about losing their jobs. There were plenty of jobs and men and women to fill them. The rise of the double-income family brought more money into every house.

What did everyone do with the money? They bought the so-called American Dream. A dream that was never thought of by the founders of the United States but became so ingrained in our culture starting in the 1950s that to dispute it would be almost as anti-American as disputing the wisdom of the US Constitution.

What was the American Dream?

It started with the house and the white picket fence. People didn’t have to live in cities anymore. In apartments with people on top of them, on either side of them. When our grandparents were growing up most people lived in apartment buildings. The building shared a clothesline, all the kids played in the fire hydrant right out front, you could hear a fart three doors down. The smell of sewage and the constant battles with bed bugs were a normal part of life for tens of millions of immigrants.

My parents. Your parents.

Now it was different. They could move to the suburbs, with wide-open streets and neighborhood swimming pools and brightly-colored strip malls. They could have a yard. SPACE! Then they bought a car that they drove to work on the huge 4-lane highways. Then the second car for the summer road trips.

And then magic! A TV to keep them entertained during the now-quiet suburban nights. Then a color TV!
Captain Kirk and Lieutenant Uhuru kissing in color!
And if you had extra money after that, you sent your kids to colleges that were springing up all over the country so they could get even better jobs and make more money and have bigger houses.

You might think I’m using the phrase “American Dream” because that’s just the general expression people use to describe the white-picket fence mythology.

I wish that were the case.

In fact, “the American Dream” comes from a marketing campaign developed by Fannie Mae to convince Americans newly flush with cash to start taking mortgages. Why buy a home with your own hard-earned money when you can use somebody else’s? It may be the best marketing slogan ever conceived. It was like a vacuum cleaner that sucked everyone into believing that a $15 trillion mortgage industry would lead to universal happiness. “The American Dream” quickly replaced the peace and quiet of the suburbs with the desperate need to always stay ahead.

For our entire lives, we have been fooled by marketing slogans and the Masters of the Universe who created them. I don’t say this in an evil way. I don’t blame them. I never blame anyone but myself. Every second I am manipulated and coerced and beaten down it’s because I’ve allowed it. They were just doing their jobs. But still…they are the manipulators. Now we have to learn how to discern the foolish from the wise and build our own lives.

There’s a saying, “The learned man aims for more. But the wise man decreases. And then decreases again.”

Everyone was learned. And they wanted two cars instead of one. A bigger house. Every kid in college. A bigger TV. How could we keep paying for that? Double incomes were no longer enough!

The 1960s fueled the wealth engine with a stock market boom. And then “The Great Society.” A new marketing slogan! When the stock market stalled, the 1970s introduced massive inflation in order to keep people’s incomes going up. The term “Keeping up with the Joneses” was introduced into popular culture in 1976 to refer to the idea that we are never satisfied anymore. No matter how many material goods we accumulate, there’s always the mysterious “Jones family” who has more. So
we
need more.

In the 1980s we again had a stock market boom. And when that leveled off, we had the junk bond debt boom to keep Americans flush in cash. The ’90s brought us both the “peace dividend” from the downfall of the Soviet Bloc and the Internet boom. Even when Asia crashed, Alan Greenspan, the Federal Reserve chairman, kept the party going by artificially pumping money into the system—not only to stave off the effects of a potential “Asian Contagion” but out of fear that the show would be over if Y2K shut off all the lights.

The party had to continue! Despite the fact that median earnings for male workers had been going down since 1970 and it was only going to get worse. Don’t believe me? Believe the data: 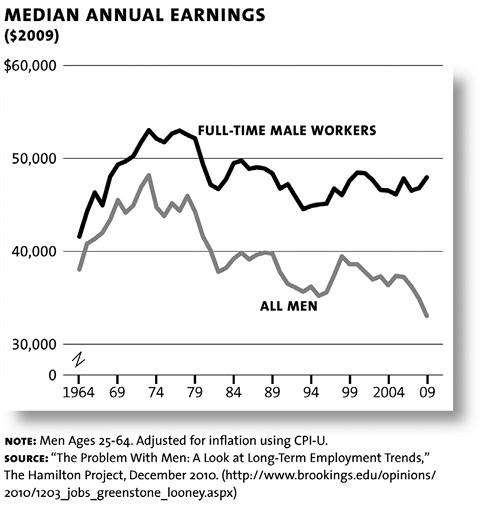 Every economist in the world can try to explain away this graph, but its downward thrust was inexorable for the reasons I will describe throughout this book: among them increasing efficiencies, globalization, technological innovation, and the fact that your bosses simply hate you.

That’s right, they hate you. You created more and more value. They paid you less and less. That’s the definition of “disdain” in my book.

Then the Internet crashed. And instead of shoring up the foundations of the American economy, Alan Greenspan kept the Federal Reserve’s foot on the pedal and pressed it to the floor, printing money that flooded into the housing system. Housing prices tripled in many parts of the country, creating artificial prosperity that sent U.S. wealth to its highest point ever.

Of course consumer spending increased right along with it, thanks to the banks. They allowed people to use their home equity to back their credit cards. Can you imagine? Every vacation you took and put on your VISA was paid for by the flimsy walls of the house that kept your kids warm at night. A house that was falling apart around you—like your life—because you couldn’t afford to repair it because VEGAS BABY, VEGAS!

Credit card debt went from $700 billion in 2005 to $2.5 TRILLION in 2007. Two short years. Now everybody had wide screen TVs, two houses, the latest Viking kitchen equipment, a boat, two environmentally sustainable cars (to assuage the guilt for their voracious consumption), and ate out two or three times a week.

And when I say “everybody”, what I really mean is “me”. I don’t know anything about everybody. I only know what happened to me. And I was up to my neck in it.

After starting many companies, making and losing millions, thinking for once I might have “made it,” I had to ask myself: what was “IT”? What did I truly “make”? I can’t even think about it. Every time I do, I start scratching big scabs off my back like a tweaker or a schizophrenic. It’s like I develop an acute spontaneous nervous condition. My hands shake and stutter because…

The tide came in. Everyone was suddenly naked! We all know what happened: everything crashed. In prior economic boom/busts, America’s technological innovation has somewhat buffered the middle class. But that period is over. There are no more booms on the horizon that we can latch onto. The smartest graduate students in China, India, and elsewhere are staying home. And the ones who come to the United States to study are going back after graduation instead of moving to Silicon Valley and starting companies and creating jobs and wealth. The companies and people in the United States who are greatly increasing in wealth are those who invest overseas in search of cheaper capital per technological development.

The only thing left was just the government increasing its debt. The government saved every bank
and
started paying interest to the banks on all their assets, artificially keeping the entire financial system healthy. Let me put this in a little more perspective.

Prices are always going to go up. The reason is simple: deflation is scarier than inflation. In a deflationary environment, people stop buying things because they say to themselves, why should I buy today when I can buy tomorrow for cheaper? So the government will always institute policies that increase inflation. Which in turn will force the above trend in median earnings to continue to go down. Still don’t believe me? Here’s the proof: 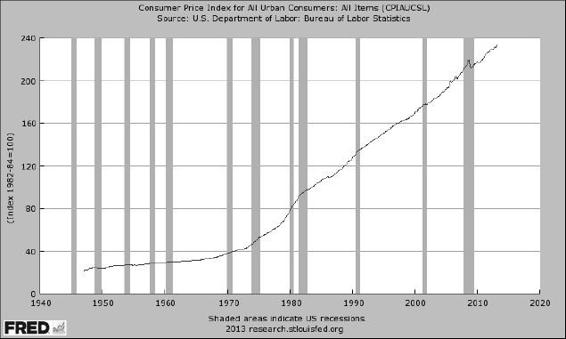 INFLATION SINCE 1940, COURTESY OF YOUR LOCAL FEDERAL RESERVE BANK:

Notice the small blip down in 2008/2009. We had a tiny bit of deflation. What was the result? The worst economic crisis since 1929, double-digit unemployment, and a declining middle class while the upper class got wealthier. 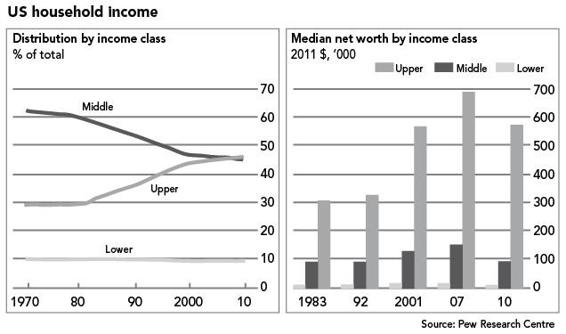 Have you ever wondered why the stock market didn’t just keep going down? Why it bounced at all from March 2009 until the day I am writing this, when the market is hitting all-time highs?

Very simple—and I state this with all humility—I personally saved the US stock market.

I moved to Wall Street in early March 2009. Specifically, the corner of Broad and Wall in the building that was once JP Morgan’s bank. You may recall from your history books that the building was the site of the first major terrorist attack on the United States. On September 1, 1920, Italian anarchists exploded a bomb, killing thirty-eight, and injuring 143 (thank you Wikipedia. Thank you World Wide Web. Now I have every number I ever need for the rest of my life. My building, a bomb, 38 deaths).

About eighty-nine years later, at the worst possible time, someone decided to convert the building into apartments. The building had a bowling alley. A basketball court. A pool. A gym. And you couldn’t give those apartments away. The building was a ghost town. NOBODY wanted to live on Wall Street. You couldn’t find a more depressed group of people than the ones going to work every day at the New York Stock Exchange; why would any of them want to live next to it, too? It was the black hole of capitalism.

Esprit de Corpse by Gina X. Grant
The Iron Ship by K. M. McKinley
Unfinished Business by Karyn Langhorne
Sigmund Shaw: A Steampunk Adventure by Mark C. King
In the Jungle by J.C. Greenburg
The Cestus Deception by Steven Barnes
A Summer in Paradise by Tianna Xander
o b464705202491194 by Cheyenne
William the Good by Richmal Crompton
Penny and Peter by Carolyn Haywood