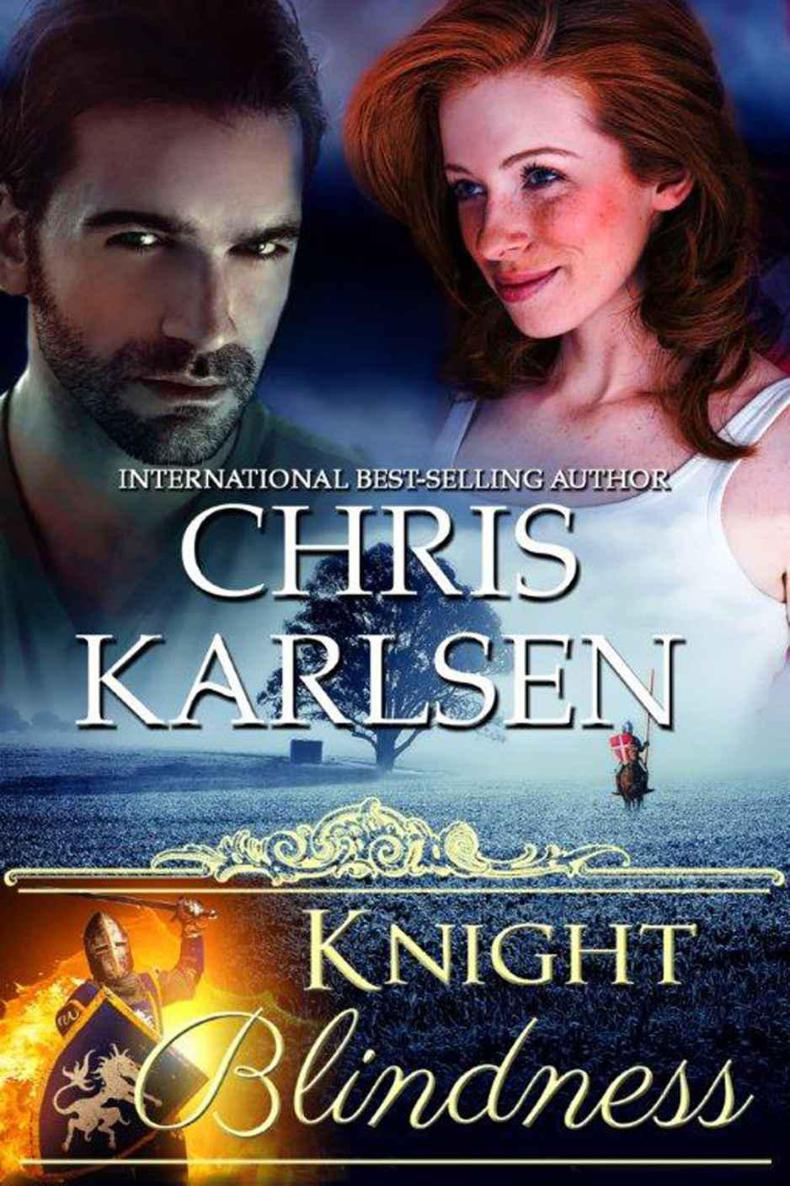 A Books to Go Now Publication

For information on the cover illustration and design, contact [email protected]

Warning: the unauthorized reproduction or distribution of this copyrighted work is illegal. Criminal copyright infringement, including infringement without monetary gain, is investigated by the FBI and is punishable by up to 5 years in prison and a fine of $250,000. All rights reserved. No part of this book may be reproduced or transmitted in any form without written permission from the

publisher, except by a reviewer who may quote brief passages for review purposes.

This book is a work of fiction and any resemblance to any person, living or dead, any place, events or occurrences, is purely coincidental. The characters and story lines are created from the

author’s imagination and are used fictitiously.

If you are interested in purchasing more works of this nature, please stop by

Other Stories by Chris Karlsen

The Knights in Time Series

I would like to thank Dr. Michael Jungkeit who patiently answered my many medical questions

and provided much appreciated expertise. I’d also like to thank Tara Annis of the American

Foundation for the Blind who shared her personal experience and insight with blindness along with helping me find the additional research material and information I needed throughout the story.

Finally, I’d like to thank martial arts expert, Lex Sensenbrenner, whose knowledge was invaluable as I choreographed the fight scenes.

To Mike and Sig.

down the initial enemy onslaught. The vibration from the second charge toward the English lines traveled up through Arthur’s powerful legs, the tremor slight against Stephen’s armored calf.

“Be still,” he ordered as the warhorse stamped his impatience.

His friend and baron he served, Guy Guiscard, said something indistinguishable over the

“We cannot hold them here, even on the high ground, not with their superior numbers.”

Both eyed the grassy gap between theirs and the French held plateau. Unfurled enemy

banners flapped in the breeze, a colorful swell that continued up the expanse.

“Maybe not but we can blanket the field with their blood,” Stephen said, exchanging a

Black-robed priests, who had earlier busied themselves blessing bows and swords now

busied themselves taking confessions, offering prayers, and the Holy Eucharist. A decade before, at Crecy, he believed himself invincible—a young man’s arrogant mantle. Today’s hard battle

would leave few unscathed. When the fattest of the churchmen approached, Stephen looked to

the dying below. They’d prayed too. He turned to the priest and waved him off.

On the other rise, squires stood and took the reins from a contingent of French cavalry

who’d dismounted. They retained their arming swords, axes, and morning stars. Behind them, line after line of mounted knights amassed on the grassy gap.

He and Guy were in Edward of Woodstock--the Black Prince’s column. They’d be the

first to challenge the cavalry charge.

Stephen flipped his visor down, the sound of the battle dimmed by the drone of his rapid

breathing inside the steel helm. The waiting was worse than fighting. He glanced over at Prince Edward. “Let us be done with this. Give the order,” he said low.

column. Then, the French cavalry charged. No longer a mere tremble of vibration, the ground

quaked with the bruising the soft earth took from the oncoming horses. They rode over the men on foot and made for the breach in the hedge where Edward sat.

English arrows darkened the sky. A deafening roar rose from below as the arrows found

their marks. Horses screamed as multiple shafts pierced their hides. Those who didn’t fall reared, bucking their riders off. Others bolted, crushing French and English alike.

Edward gave the signal. The prince’s column charged into the butchery. Arthur slid on the

grass wet from a lingering morning mist, blood, and the entrails of eviscerated horses and men. To Stephen’s right, Basil Manneville, best friend to Guy, went down. His horse had taken an ax to the chest as Basil leaped the hedge.

Guy, several strides ahead, turned and rode to his aid. Stephen spun Arthur around,

spurring him hard to help. His pursuit was cut off by a mounted enemy knight. The Frenchman

came at him with his long sword, which Stephen maneuvered away from then quickly pivoted to

Trained by Stephen since he was a colt, Arthur didn’t flinch or shy from the charge. He bared his teeth at Stephen’s cue, ready to bite either the enemy or his horse. The Frenchman’s mount

danced to the left. The knight’s position altered a fraction leaving a vulnerable space open under his arm between the back and breastplates of his armor.

Stephen plunged his sword deep into the Frenchman’s side, striking ribs then soft tissue.

The knight swung once with his morning star and then fell from his mount. The strike missed.

Several lengths off, enemy soldiers had Guy surrounded. As Stephen reversed direction to

ride to his aid, he caught a flash of orange and black in his peripheral vision. Guy’s warning from Yuletide the year before came back to him.
Beware the black cat in a field of orange.

The image closed in on him. He turned and saw the Frenchman’s surcoat, a panther on a

background of orange silk. Stephen hesitated for a split second as the warning became real. The French knight raised his sword high. Stephen brought his up.

A second too late.

Roger Marchand followed as the English knight crawled, blood leaking from the slits in his

visor. The knight’s mount trailed along, nudging his master with his nose when he stopped and lay helpless by a flowering bush.

Marchand slid his long sword from its ring to finish the knight off. “English pig.” He moved

to plunge the blade into the exposed part of the man’s neck. Before he could, his mount pinned his ears and reared. The animal’s mane bristled, he tossed his head, fighting the bit, and attempted to lunge, ready to bolt.

With his free hand, Marchand tightened his grip on the reins, trying to control the excited

horse, when sudden dizziness possessed him. Beneath him, the ground appeared to sway. The

wounded knight turned to a watery image as did Marchand’s sword and gauntleted hands.

Unable to focus as all around him shifted, he squeezed his eyes shut then opened them

again to the same bewildering sight. Conquerant lurched from side to side. Unsteady, Marchand

wavered in the saddle and grasped the pommel to stay astride. He spit and spit again. How his

mouth watered, yet when he’d gone into battle, his tongue stuck to the roof it was so dry.

As sudden as the confusing disturbance occurred, it ceased. Conquerant stilled. The

and there, the hair on his horse’s mane and tail stood on end.

Marchand looked to his right and then left. Other than the Englishman and his mount, all

else had changed. The battle no longer raged. The men and horses were no more. He looked to

where armies once gathered. The woods where the English had camped endured, but the rise

they’d formed upon had disappeared along with the French plateau. Strange houses stood there

now on a flat field. A strange, black road with painted lines lay where no road existed before.

He made the Sign of the Cross. By all the saints, what happened to him and the

Englishman? He twisted in the saddle, searching for anything familiar and saw the profile of

Abbey Noialles not far away.

He sighed and touched a hand to his heart. At least he was still in France. “
Merci Dieu,

A few strides away stood a large, wooden plaque. He sheathed his sword and walked

Conquerant to the front of the plaque. Written in both French and English, the story spoke of a great battle fought on these grounds in 1356. The French was different than what he spoke, but he understood the words.

Fought
. What was the meaning of this tale? It claimed an English victory. He shook his

head in disbelief. How? The battle had not ended. The French greatly outnumbered the army of

the famous Black Prince. Unlike the hungry English, their bellies were full. Like all the other French nobles, weeks earlier, Marchand with his company of knights seized most of the

province’s harvest. They left only enough to feed the peasant farmers through the winter and

He turned at the sound of faint voices. Out of one of the strange houses came an oddly

dressed couple with a dog. He backed Conquerant a few feet so the sign offered partial

concealment. The dog immediately turned toward where he hid.

The other horse pawed the ground. “Arthur,” the Englishman said barely above a whisper.

Marchand’s hand went to the hilt of his sword. The dog remained alert, his snout raised,

sniffing the air, but the animal didn’t move. It may not have heard the knight’s soft utterance.

Marchand eyed the dog then the knight. He should finish the Englishman off. But to kill him might draw attention. One death groan would bring the dog.

The man and woman headed in the opposite direction towards the Abbey. The dog trotted

to the edge of the odd road and stopped. Again, the animal fixed on the spot where Marchand hid.

The dog barked and trotted a few steps closer.

His owner turned and whistled. The dog didn’t move but stayed fixed on Marchand and

the knight. The man whistled a second time and called the dog. Only then did the animal turn and run to his master. The man and woman continued toward Noialles.

When Marchand lost sight of the couple, he forced himself to action. He grabbed the reins

of the Englishman’s mount. The horse had value. Using the cover of trees that dotted the field, he galloped into the woods where the forest thickened with old oaks.

From under the dark canopy, he watched the couple from the house return. As they

walked alongside the road, the dog ran ahead several paces then turned toward where the knight

Face down, the ground was cool beneath Stephen’s hands. The other knight’s blow

must’ve unhorsed him. What happened to Arthur? Did he wander near or had he fallen into

Warm fluid ran into Stephen’s eyes and over his cheeks and seeped into his mouth. It

tasted foul, metallic, as though he’d licked his armor or sword. The taste wasn’t unfamiliar. He’d cut his mouth or lip often enough during practice in the lists to recognize the tinny quality. Blood
.

Panic raced through him. He needed to take his helm off and wipe his eyes to know how badly he

was hurt. He blinked. Something sliced at his eyelids. Stephen cried out and pounded the earth

with his fist as tortuous pain seized both eyes. Everything was black. His eyes were open and all he saw was black. The horrible reality of how bad his injury might be struck him.

French. I am a prisoner.

His captor rolled him over before he could rise.

Stephen wasn’t a nobleman but a captive with no ransom value. Better dead. “
Etre

rapide...
Please—be fast,” he said, hoping one knight to another, the enemy would honor his request to kill him quickly.