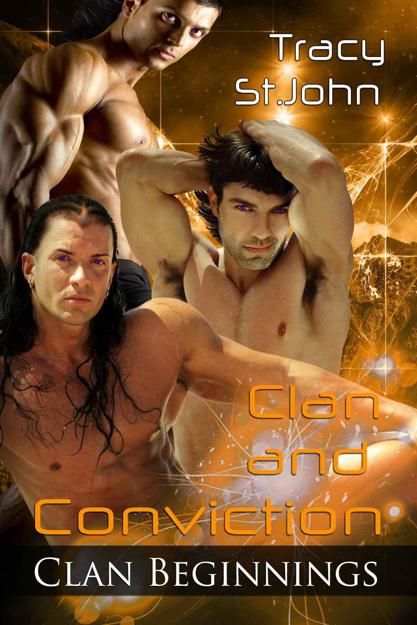 A Clans of Kalquor Story

This is a work of fiction. All characters, events, and places are of the author’s

imagination and not to be confused with fact. Any resemblance to living persons or

This ebook is licensed for your personal enjoyment only.  This ebook may not be re-sold or given away to other people.  If you would like to share this book with another person, please purchase an additional copy for each recipient.  If you’re reading this book and did not purchase it, or it was not purchased for your use only, then please return to Amazon.com and purchase your own copy.  Thank you for respecting the hard work of this author.

To
Kat.  Many thanks for keeping me straight.

BOOK
ONE:  GELAN AND WYNHOD

This book is the prequel to
Alien Slave
, Clans of Kalquor Book 5.  It takes place seventeen years before the events of that story.

The Kalquorian Empire was and still is a civilization of great importance to the Galactic Council of Planets.  The fierce but intelligent species has been at the forefront of technological, medical, and scientific breakthroughs for millennia.  Their military might has never been in question; even their ancient enemy, the opportunistic race of Tragooms, hesitates to attack a Kalquorian force half its size.

However, Kalquor’s survival is in jeopardy.  The force that has threatened this mighty race is not one that wields weaponry.  It cannot even be seen with the naked eye.  It is a virus.

Centuries ago, this virus struck the home world of Kalquor, wiping out a substantial number of its people, particularly the females.  Symptoms included massive bleeding of the body’s major organs, along with those of the female reproductive tract.  Damaging the x-chromosome of the Kalquorians, the virus’ effects went beyond death.  The majority of women not killed outright were rendered infertile, and daughters born to those who could bear children were not guaranteed the ability to do the same.  The virus altered the very DNA of the entire race.

In an effort to keep their race from going extinct and prevent fighting amongst the men, family groups called clans were formed.  Each clan was made up of one female known as the Matara (childbearer) and representatives of each of the three breeds of male:  the Dramok (leader), Imdiko (caregiver), and Nobek (protector).

A Matara may not join a clan until the three male members are in place.  There is no guarantee a clan will attract a female, since the women are so rare.  In their absence, the men forge close, often intimate, relationships with each other.  As the Kalquorian Book of Life reminds us,
Even the strongest warrior must find a fortress for his heart, the walls of which are built from the love of others.

Twenty-five-year-old Imdiko Krijero burst into the small government-provided home he shared with his lover.  He tripped over his own toes on the way in, jerking around and barking his shins on a small table just inside the door.  In his excitement, he barely noticed the pain of yet more bruises added to his constant collection.  He waved his handheld computer around in his excitement.  The vid image issuing from it suspended just above his fingers.  It consisted of only a few lines of written communication, but those few lines had just changed his life.

He got no answer.

Krijero looked over their government-issued quarters.  His enthusiasm dimmed in the disappointment that Pertak wasn’t right there, ready to celebrate.  His gaze swept over the greeting room’s nondescript seating cushions and tables that had come with the place.  The young Imdiko already mentally catalogued how nice the furniture would be in their new home, the apartment they would now be able to afford.  The place he and Pertak would start their official clanship now that the last hurdle to their parents’ objections had been cleared.  Krijero had a real job.  Better yet, he had a career, one he’d been looking forward to for years.

Sure, Pertak still had to get off his ass and do the same.  At 27 years old, the laid-back Dramok continued to rely on the low pay of government-funded infrastructure repairs, work delegated to those who hadn’t yet settled on their life’s goals.  His and Krijero’s parent clans would no doubt still kick and bitch that Krijero couldn’t take on all the responsibility.  After all, Pertak was a Dramok and needed to assume leadership.

Krijero had faith in his fun-loving, somewhat irresponsible childhood friend though.  The Imdiko’s success would provide the spur to kick Pertak into gear.

Maybe Pertak waited in their sleeping room, ready to celebrate in an appropriate lewd fashion.  Krijero grinned and hurried into the small space where the sleeping mat nearly reached from wall to wall.

His boyfriend was not in the sleeping room, and the wide-open restroom door showed he wasn’t in there either.  Krijero found no sign of Pertak, though he had the day off and should be waiting to learn the news they’d been hoping for.

Krijero’s arm holding the handheld and its reason to celebrate lowered.  “Well, damn.  Where the hell are you?” he asked the empty apartment.

He tried not to let his lover’s absence dim the excitement.  He had landed a criminal psychologist job at the local territorial police precinct.  He’d coveted the position for months and had managed to beat out over twenty other applicants.  Not too shabby for someone right out of training, perfect evaluation scores notwithstanding.

It wasn’t just the challenge of the work or the thrill of being a part in keeping the Southwest Mountain Territory a safe place to live.  As the third-most populated area on the planet Kalquor, it was a big job.  Krijero wanted to make a difference in his community.  Working with law enforcement as support staff would be a fulfilling task as well.  But knowing he and Pertak could finally afford a home beyond what the government provided was exciting.  They wouldn’t be able to buy into anything big of course, but they could get something more than two rooms and a bath.  Who knew?  Maybe their parents would even give their blessings to the match now.  Krijero and Pertak were old enough to clan without permission, but getting their parents on board was important to them both.  Krijero’s new job represented the last hurdle their elders had placed on gaining their approval.

This was the day Krijero had been waiting for.  All that was missing was his Dramok-to-be.  Bursting with the good news, he decided to com Pertak and find out where his lover had gone and when he would be home.

The Imdiko went back into the main room to use the house com.  He finally saw the message notification blinking over and over.  A voice-only recording waited to be played.

Pertak’s thick, uncertain voice filled the room.  “Hi, Krijero.  Look, I’m sorry to do this to you over the com.  I mean you deserve to get this news face to face, but I … I just couldn’t do it.”

Krijero frowned.  Damn it, he’d be pissed off if Pertak had showed up late for work again, scoring yet another forced leave without pay.  Such screw-ups were the very thing both their sets of parents kept scolding the Dramok for; a lack of initiative and responsibility.  Krijero knew his boyfriend would do well in life if he would just
try
for once.

But no … Pertak had had the day off.  It couldn’t be that.

After a lengthy pause, Pertak began speaking again.  His voice came out choked, like it always did when he’d royally fucked up and felt terrible about it.  Like the time he’d wrecked the used shuttle Krijero had saved two whole years for.

Whatever Pertak had to say, it wouldn’t be good.  Krijero tried to steel himself for what was coming.

“Damn, this is hard.  But what’s done is done.  I can’t take it back, and I wouldn’t if I could.  Krijero, I’ve moved out.  I took just my clothes; you keep all the rest of the stuff.”

Moved out?
Moved out?
Krijero stared at the com.  It had to be a joke.

“I’ve … I’ve been seeing someone else for some time.  Another Imdiko.”

His heart stuttered.  A joke.  A really bad joke, and when Pertak showed up, Krijero would find something big and heavy and beat him with it.

“I’m so sorry, Krijero.  I asked him to clan this morning, and he accepted.”

Krijero’s handheld slid out of his nerveless hand.  It hit the floor and pieces broke off.  The vid of the job offer, the job they’d waited for, the job that was going to officially start their lives together, blinked off.  Krijero didn’t notice.

“I know you’re pissed off, and you have every right to be.  My parents are going to hit the roof.  You know how they wanted me to establish a career first – well, I guess you don’t care about that, do you?   I am so sorry.  You’re a good guy, more than what I deserve, and I know you’ll find someone who will make you a decent Dramok.”

It’s got to be a joke.
But Krijero had known Pertak since they were children.  They had grown up together.  He knew every nuance of the other man’s voice, knew when the Dramok was pulling his leg and knew when he was lying.  The regret in Pertak’s heavy, thick tone betrayed neither a joke nor a falsehood.

The nightmare spun on, delivered in a recording that said nothing of over twenty years of first friendship and then love.  “I – I don’t know what else to say.  I just – I’m sorry.  We aren’t right for each other.  I’ll always care about you, but – I just can’t be the Dramok you need me to be.  Goodbye, Krijero.”

The com clicked off.  The message ended, along with Krijero’s life and dreams.

He thought for a moment about checking the closet, to make sure Pertak really had packed his clothes and left.  However, his legs wouldn’t move for several seconds.  When Krijero did manage to finally shift, it was to drop onto the seating cushion he thought lay behind him.

He landed half off the pillowy surface, falling over onto the floor.  The thick fur rug Pertak’s mother had given them broke his fall when he collapsed onto his side.

I took just my clothes; you keep all the rest.

Krijero laid there with his chest and stomach hurting.  He laid there as the afternoon crept into evening and evening into night.  He laid there until sleep finally claimed him and halted the silent tears that had come and gone through the hours.

When he woke the next morning still curled into himself on the floor, no Pertak there to tell him it had all been a terrible nightmare, Krijero screamed.  He screamed his hurt until his throat went raw.  And yet the horrible aloneness, the gaping hole left in his gut, couldn’t be shrieked or sobbed away no matter how he tried to make it happen.

Krijero had yet to learn the chasm Pertak’s abandonment had left inside him would stretch empty for years to come.  He had no idea that the raw ache of being tossed aside and deserted had just begun.  This lack of awareness of the long, isolated years ahead was the only kindness of the abrupt betrayal.

Rites of Passage by Joy N. Hensley
UnGuarded by Ashley Robertson
Styxx (DH #33) by Sherrilyn Kenyon
RS01. The Reluctant Sorcerer by Simon Hawke
Super Sad True Love Story: A Novel by Gary Shteyngart
How To Avoid Death On A Daily Basis: Book One by V. Moody
Los nómades de Gor by John Norman
The Symbolon by Colvin, Delia
The Heart Of A Gypsy by Roberta Kagan
Atlantis by Rosberg, Jessica