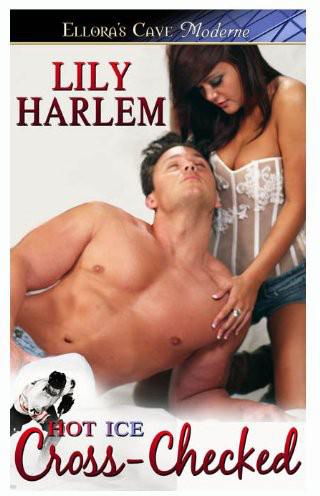 Being a world-class athlete myself, I have a strategic plan to have him all tied up with lust and desperate for me too. The thing is, plans never go smoothly. Especially when my heart pedals right into the vulnerable game of love again—completely unprotected.

I’d admired him from afar for over two years now. Ever since he’d been taken on as right-winger for the Orlando Vipers, I’d been having decidedly dirty thoughts about his delectable body. Okay, so maybe I was a little starstruck, but there was just something about him that had captured not just my fancy but also my fantasies. Tall, broad and handsome, with the look of the devil in his eye, he was trouble on the ice, he was sexy as hell off it and I, for one, wanted a piece of the action.

Maybe my crush had something to do with the fact that it had been a while since I’d hooked up with a guy. But it was time for that to change and if it was going to be anyone, I sincerely hoped it would be Brick. I reckoned he was just what my poor neglected body and my recently repaired heart could do with.

But today, seeing him in real life rather than on TV or the glossy pages of a magazine, was enough to crack even my calm, cool exterior. Strange things had happened to my usually perfectly controlled body. My stomach fluttered as though filled with butterflies, a delicious heat pooled in my pelvis and I could feel my nipples straining against my tight Lycra top.

I tried to concentrate on the photographer’s instructions. But it was near impossible when every nerve had homed in on the hot hockey player several steps to my right.

“Move closer,” the photographer snapped at the group. “Move closer. You with the oars, shuffle one in front of the other. We need you tighter, people, so much tighter. If you all want to be in the shot, squeeze up and look friendly.”

There was much shuffling of feet and apologizing as shoulders jostled. A balding swimmer dressed in a Speedo pressed in behind me. He’d clearly eased up on his training and heat from his generous belly radiated on to the hollow of my back. I suppressed a shudder and glanced to my right. The need to study the object of my desire was as strong as two opposing magnets being drawn together. I simply couldn’t help myself.

From beneath his hockey helmet, Brick’s piercing green eyes sparkled my way. My breath hitched and my heart thumped but I refused to let it show. Instead I caught his gaze and calmly held it.

The right side of his mouth curled in a dirty, bad-boy grin and I tipped my brows just a fraction in reply. I wanted to show interest but not seem overeager. If I’d caught his eye, which it seemed I had, then I wasn’t going to be an easy conquest for the infamous Brick. That would get me nothing but a one-night stand and I refused to be just another rink-bunny notch on his no doubt filled bedpost.

I wanted to be more than that.

“People, people, concentrate, please,” the photographer sighed, mopping at his brow with a red dotted handkerchief as he ducked to his lens. “No, no, no. This isn’t going to work at all.” He flapped his arms in despair. “This is dull, boring. Who wants to look at a bunch of people just hanging around? We need something more.” His brow furrowed then his whole face lit up. “You’ll have to go up if you can’t go out.” He raised his hands in the air. “Gymnast,” he barked. “Stand on, on, what’s his name, the runner, stand on his shoulders and pose.”

The waiflike gymnast, shivering in her red-white-and-blue-starred leotard, nodded then shimmied up the tall, thin Olympic runner at her side as if she were a mountain goat. She stretched her arms to the roof, lifted one leg into the air and pointed her toes. The runner gripped her ankle and grinned.

“Excellent, excellent.” The photographer beamed. “And you, you with the…” He pointed straight at my chest and for one horrifying moment I thought he was going to identify me by my protruding nipples. “You with the long black hair and the, er…tight black outfit,” he said, fluttering his hand in my direction. “You’re light, you can go upward too.” His gaze swung around the assortment of athletes as he gnawed on his bottom lip with his teeth. “Viper players, yes, perfect, lift her up, sideways, above your heads, like she’s lying down but way up high.”

My eyes widened and my mouth dropped open. Get lifted up by three giants—was he crazy? I could do most things but I hated heights. I hated heights the way most people hated the idea of burning in hell. Heat I could take.

“Come on, come on, we haven’t got all day.” He snapped his fingers and the sound echoed around the studio.

The two rowers and the swimmer stepped away and the bright overhead lights disappeared as three enormous shadows engulfed me. I looked up, my heart beating wildly and my knees dissolving. Three big hockey players, easily the hugest objects in the room, loomed over me. With their red-and-white jerseys and their enormous shoulder pads, they were intimidating and gorgeous all at the same time.

Ramrod, captain of the Orlando Vipers, grinned down at me. “Don’t look so worried,” he said with a quick wink. “We won’t drop you.”

“As long as you don’t wriggle,” Brick added.

Oh my god. His deep, drawling voice was even sexier in real life than on TV.

“’Cause if you got plans on wriggling, then you should seriously consider being worried.” His gaze fell to my nipples straining even harder against my top. “’Cause then we’ll have to hold you real tight so you can’t get away.” His tongue poked out and swept across his bottom lip.

I stared at the sheen of moisture his tongue left on his mouth and resisted folding my arms over my chest. “I’m not worried in the slightest,” I said, trying desperately to hide the shake in my voice. I never admit weakness. The idea of people thinking of me as anything less than one hundred percent capable is not something I entertain. If it were, I wouldn’t have an Olympic gold medal sitting in my trophy cabinet at home.

“Today, not tomorrow if you don’t mind.” The photographer clapped his hands at us.

“I’ll take feet.” Phoenix, the bad boy of the team, stooped down. There was something about the scratchy quality of his voice and the two-day-old stubble coating his jaw that made me nervous. I started to take a step away. I had no intention of being lifted above his head.

But I didn’t move more than a foot. Because next thing, six big hands wrapped around various parts of my torso and limbs and catapulted me upward faster than an amusement park ride.

I squeaked a protest and flailed my arms, instinctively looking for support. But Ramrod had my upper arms tightly secured and I couldn’t find purchase on so much as a shoulder pad.

Still traveling upward, I looked down on the other athletes’ heads. As I was unceremoniously pitched horizontal, I swallowed a cry of fear. Six elbows locked beneath me and the nothingness of air surrounded me.

“Perfect, perfect,” the photographer said. “Now place your right hand beneath your cheek and smile.”

Ramrod altered his hold so I could do as instructed.

I did my best to stretch my mouth sideways, but I knew it looked more like a grimace than a smile. How could it not when I was about to vomit?

“Like you’re happy, my dear, we’re supposed to be raising money for a children’s charity after all. Be happy about the millions you’re raising with this insanely cheesy song.”

Suddenly I became acutely aware of Brick’s hands. He had one wrapped around my lower ribs, on the bare flesh between my cropped top and shorts, and the other over my hip. Unlike Ramrod and Phoenix, whose fingers were still, his were lightly brushing the skin in the dip of my waist. Delicate little caresses that sent flames shooting to my belly and heightened the sensation in my nipples all the more. I glanced down at him. All I could see was the top of his shiny white helmet and the upward tilt of his caged visor. Was he doing it on purpose? Did he know how scared I was at being lifted so high even though I tried to hide it?

The caress continued and he poked his fingertip under the elastic of my top. Only a fraction, the merest inch, but it increased the sensation tenfold. I almost forgot about being so high. I’d fantasized about Brick’s big hands on me more times than I cared to admit. Dreamed of him touching every part of my body wearing the same determined look he wore when driving a puck down the ice. I tuned into his hand over my hip, his huge palm and his long, strong fingers pressing into my buttocks. Was this really happening?

“This is great, great, much better.” The photographer was back behind his camera. “Swimmer, you’d best move to the rear, rowers, oars to the floor—how many times do I have to tell you? Perfect, perfect. Smile, people, don’t grimace up there, come on, smile, smile.” The camera clicked rapidly, like a gun shooting at targets. I managed a semi-genuine smile. “Perfect, perfect.” More clicks and instructions. “Excellent, it’s a wrap, well done, that’s us finished people.”

Redeemed Complete: A Military Stepbrother Romance by Lucy Snow
Strife by John Galsworthy
Girls Only: Pajama Party by Selena Kitt
The Ka of Gifford Hillary by Dennis Wheatley
Appleby And Honeybath by Michael Innes
Fyre & Revenge by Mina Carter
Tell Me Something Good by Jamie Wesley
A Place For Repentance (The Underwood Mysteries Book 6) by Suzanne Downes
Nine Steps to Sara by Olsen, Lisa
Do You Sincerely Want To Be Rich? by Charles Raw, Bruce Page, Godfrey Hodgson