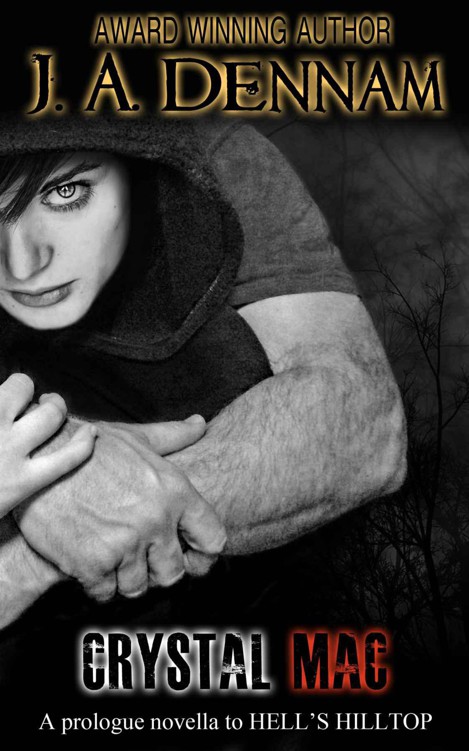 To my dear friend, Debie, who dares to dream

Submission. Something Crystal thought was beyond her had suddenly become general practice within the last twenty-four hours. It wasn’t supposed to be that way. Her meek and mousy years were over, ever since the men in black hoods abducted her from her college dorm three years ago.

I
’m not Elsa anymore. I’m Crystal, a field agent for IGP, one of the most successful private security firms in the country. I now wear a black hood, which means I am capable of many unusual things. I can take down a man three times my size. I can disappear in the blink of an eye. I can change my appearance with paper clips and duck tape.

She yanked on her wrists only to feel the res
istant tug on her bound ankles.

So, why the fuck am I still here?

At least the caged feeling was subsiding now that she’d finally been given her pill. The shadows were no longer moving, her sweat-soaked skin was beginning to cool, and the pins and needles were finally gone, taking with it the irrational urge to claw the muscles from her body.

Though the noise of her anxiety lessened, the hollowed dankness of her surroundings only amplified the haunting sounds she could not explain. Tortured moans. The creek of ropes that were not her own.
Distant footsteps reverberating through the aged wooden planks overhead.

There were ghosts in this old house, all right. And she was one of them.

Not the ethereal kind that went bump in the night, but an IGP “ghost” agent who wouldn’t do something so sloppy. Unfortunately, those ghosts were being exterminated, and she was once again a prisoner, forced to pledge allegiance to he who flexed the bigger muscle.

She should have known it was only a matter of time before IGP was taken down. They didn
’t exactly operate on the right side of the law, but that’s what made them so effective. Dangerous. Her conscience suffered on occasion, but not enough to start killing her brethren and rendering their headquarters useless with a strategically placed clump of C-4.

Throughout her experience, i
f she were to predict which ghost would go rogue, it was Derek Bennett. There had to be a reason their handler, Rafferty, had kept him in a locked cell at night, and fixed him with a tracking device despite the chemical ties that kept them all close. Only a fool would leave, since without their enhancement drug—which she’d just learned was called Nexifen—they’d suffer the worst withdrawals imaginable…and imminent death.

Now
Derek controlled the drugs. Flexed the biggest muscle. Now Rafferty was the one imprisoned, suffering through his withdrawals in the open room next to hers. The only reason her suffering had ended was because she’d just agreed to help kill the ghosts who’d survived last night’s explosion.

Sweat trickled alongside her brow. Crystal managed to lift a shoulder enough to wipe it away. Rafferty’s moans were growing louder, grating against her frazzled nerves. She moistened dry lips with her tongue and dared something new.

“Shut the hell up, Rafferty!”

A scuffle
outside her doorway indicated one of her captors had never left. She flicked unruly bangs from her eyes, squinted toward the sound.

But the shadow looming just beyond reach belonged to someone taller, broader than her fellow ghost.

The question, spoken in a low rumble, lacked the barest hint of compassion. Crystal squeezed her lids over frost-colored eyes that had yet to fully clear. “You’re the Mack truck who knocked me out last night.” And killed her partner. And carried her away from IGP’s basement so she could watch it explode. “What’s your name, again?” she asked.

Yeah, sure. “Fine, don’t tell me. Just trying to be friendly.”

“You can make nice after you prove yourself. Until then, you’re still the spook who kidnapped and drugged an innocent child.”

Anger warmed the cold that came with the black hooded uniform she wore. “Look. Rafferty is the one who wanted that baby dead. I didn’t even know Derek had a kid until I found that out. And I saved him, remember?”

“
Which is the only reason you’re alive. But you should have returned him to his mother.”

That again! “I did,” she griped, feeling the guilt. “
After I removed his tracking device, which I couldn’t do without sedative.”

“As
long as you know,” his dark shape shifted as he turned to leave, “one false move and you’ll be cut off from your drugs for good. Nothing I can do about that.”

“Wait!” He stopped. Crystal moistened her lips again. “You’ve been with me down here the whole time, haven’t you?”

Though he acted as more of a guard, h
is presence had been strangely calming through the worst of her withdrawals. “Please, don’t leave,” she murmured, head low. “Not yet. Not until I’m right again.”

The
man narrowed his eyes, and with a sharp exhale, resumed his position against the doorframe. Now that the drug was working its magic, her night vision was improving. Colors began to appear in the dark. The red of his shirt stood out in particular, long sleeves pushed up past the elbows, worn jeans and clunky work boots that boasted large feet. He wore baldness like one of those action movie stars, and it even came complete with a scuffed battle wound. She could do without the coarse, earthen-colored mustache, though. It covered way too much of his face.

“Have you ever had a woman take a razor to t
hat lip?” she purred, her throat raw and raspy from screaming.

He came closer, reached upward and switched on the overhead bulb. Her eyes instantly adjusted without so much as a flinch.

“Just so you know,” he said pointedly, “anxiety makes me cautious, not stupid. So don’t try and psyche me out with words or that frosty look of yours. It won’t work.”

Her mouth parted as it formed a reluctant smile. “Duly noted.”

“You find that funny?”

It was a miracle she could find amusement in anything at the moment. “Refreshing, actually.” When his silence commanded an answer, she said, “Men usually use the color of my eyes as some sort of pick-up line.”

“I wouldn’t be lookin’ for one of those from me.”

“Yeah, I’m
gettin’ that,” she shot back just as quickly. “What’s the matter, you not into girls with short hair?”

His shoulders slumped in exasperation. “I meant you’re a bit on the young side.”

Ah, a common error made by most. Even though she was twenty-five, her face still boasted the slender angles of a teenager… which made her the perfect decoy in any IGP operation.

“I’m only three years younger than Rena,” she provided. That bit of info should explain it all. Her
half-sister was well known by these folks.

Crystal could see him do the math behind those guarded eyes of his. He probably found it hard to believe she was even related to Rena
, who was tall, gorgeous, endowed with all the physical assets that turned men into drooling idiots… despite being an escaped inmate from the Valley State maximum-security psych ward.

Crystal rolled her head, closed her eyes
, and sifted through Derek’s words one more time.

“
You’ve already begun to turn against IGP, Crystal. Rena’s our only chance at severing the cord. She can help us, but only if you get your head out of your ass.” He walked toward her, held out her dose. “You need to
want
to reclaim your life. Don’t let Sophie or IGP take it from you. Work with us on this.”

She stretched, thrusting her chest outward. Wrists and ankles screamed beneath the coarse ropes. Now that her senses were fully restored she could hear what sounded like acid rock bleeding from the room next door.

“Rafferty hates that shit,” she observed when the pieces fell into place. “No wonder he’s been whining like a snot-nosed kid.”

Mack Truck crossed his ankles and adjusted his position against the doorframe. “Your former handler is a cagey bastard, so I’m playing it safe.”

“By blasting his eardrums with grunge?” She inhaled, slowly collecting the healthy vibes of sanity. “Why not just kill him like the others?”

“We may need him as bait to draw out the remaining ghosts.”

Crystal’s eyes slid open. “And River? I’ve heard his voice in there. You need him, too?”

The fact they hadn’t killed IGP’s youngest ghost puzz
led her. Was it his youthful façade that made them hesitate even though the compassionless little turd had nearly killed them all, including that sweet little baby?

“He’s proving useful,” the man answered
with a sideways smile. “Gave us a lead on where we can find the basement chemist who makes your drugs. In return, we gave him half a dose. Just enough to keep him sane.”

She nodded, hoping the movement disguised the careful
working of her wrists. “Okay. So… after I do my part, what next?”

“Depends on how well you do your part.”

Crystal pushed air through her lips. “Trust is obviously in short supply on both sides of the fence. Derek’s been killing us one by one. How do I know he won’t do the same to me?”

Let's Talk of Murder by Joan Smith
Shakin' It For Daddy (The Panty Droppers) by LeMar, Tigra-Luna
One Hundred Years of Marriage by Louise Farmer Smith
Grave Dance by Kalayna Price
More Than Great Riches by Jan Washburn
Swamp Foetus by Poppy Z. Brite
Fallen-Angels by Ashlynn Monroe
All the Single Ladies: A Novel by Dorothea Benton Frank
Deceived by Jess Michaels
A Woman of Bangkok by Jack Reynolds