Dark of Night - Flesh and Fire 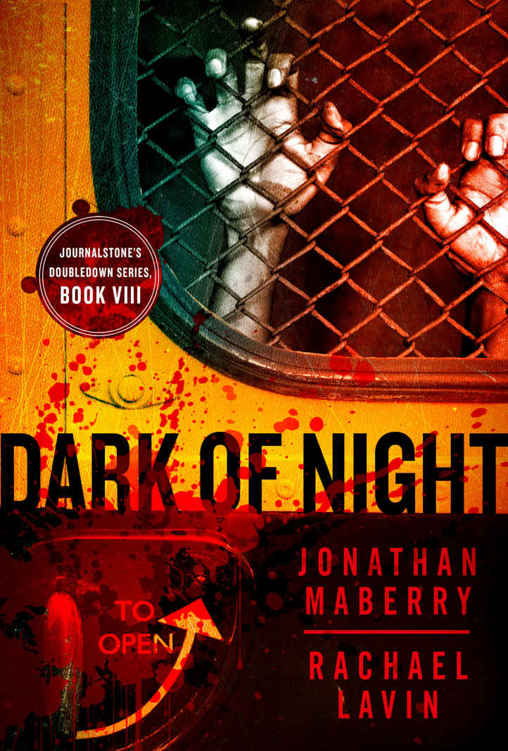 DARK OF NIGHT
AND
FLESH AND FIRE

A Story of Rot and Ruin

The views expressed in this work are solely those of the author and do not necessarily reflect the views of the publisher, and the publisher hereby disclaims any responsibility for them.

This story is a collaboration on several fronts.

It is first a collaboration between two writers, myself and talented newcomer Rachael Lavin.

It is also a collaboration—or perhaps collision—of three of my fictional worlds. Story threads from my Zombie Apocalypse duology,
Dead of Night
and
Fall of Night
lead us into the tale, but that thread quickly becomes entangled with elements from my
Rot & Ruin
novels and also with the Joe Ledger thrillers. You do not need to read those books first, however, in order to read and—hopefully—enjoy this tale of survival in the days following the rise of the living dead.

For those who have read some of all of those books, and for those who enjoy knowing where something falls in the proper chronology, this takes place fifteen years after the Joe Ledger books, and six months after ‘First Night’—the events described in
Fall of Night
. Those events took place fourteen years before
Rot & Ruin
.

The child’s voice was too loud, too shrill and Desdemona Fox moved quickly to clamp a hand over the little boy’s mouth. The boy struggled, panicking because of what was outside—what was
always
outside—and because of Dez’s hold, her strength, the sharp stink of her unwashed body, the blood and dirt on her hands. The gun in her other hand.

But Dez pulled the boy close, pressing him against her breasts, curving her shoulder around him as if that could keep him safe.

Inside the bus the other children were frozen in postures of listening, their faces transformed into masks of fear and uncertainty. No one made a sound. Everyone held their breath as they listened and waited.

The only sounds were outside.

The slow, artless shuffle and thud of feet against the blacktop. The hiss of cloth as bodies brushed past the sides of the bus. The low, endlessly desperate moans that spoke of bottomless hungers.

In the grass alongside this stretch of highway even the birds and crickets had fallen silent. It had been half a year since these moans began to fill the air, and the animals had learned their lessons. The incautious—insect, bird, and mammal—died. The cautious few who survived had learned to be quiet, to be still. To be unheard and unseen.

The children inside the bus knew that lesson, too. Even the little boy who now clung to Dez, fearing her less than he feared the things passing by. He did not speak again. He barely breathed.

The moment stretched and stretched, becoming excruciating.
How long this time
, wondered Dez.
How many?

And what was happening inside the other busses? She strained to hear, but there were only the dead sounds from outside. The
wrong
sounds.

No screams. No gunfire.

A silence that at first felt filled with promise like a cocked fist, and then emptier. Emptier and then finally empty.

Dez sagged back, exhaling the air that had burned to poison in her lungs. The little boy looked up at her, his eyes huge and filled with ghosts.

“Are they gone?” he said, more mouthing the words than speaking them aloud.

She pushed him back gently, handing him off to one of the older children, a girl of eleven. Dez put a finger to her lips and turned so that everyone on the bus saw the gesture. They nodded. Those who could nod. Those whose minds could process the signal.

Dez rose and moved toward the back of the bus. The creatures had been going that way, past them, heading south along the highway. All of the windows on the bus were blocked out, covered with pieces of cloth or cardboard held in place with duct tape. Sloppy but effective. She waved the kids away who crouched on the rear bench seat and they moved without comment, casting frightened looks at the opaque window behind them. The only other adult on the bus, Biel, a former math teacher with a pinched face and a bruised cheek that was fading from purple to yellow, also moved away from Dez. Biel’s eyes met hers and immediately flicked away. He was silent. The bruise on his face was a reminder of the least of things that could happen to noisy people. He’d seen Dez kill someone who couldn’t keep quiet. Not a kid, though; it had been an adult who they’d picked up along the way but who was a noisy troublemaker, whiner and complainer. The kind of person who couldn’t hold his tongue even when it meant drawing the attention of the dead. Dez Fox had warned him twice. On that third time she hadn’t said a word but had dragged the man to the door of the bus, drove a Buck hunting knife into his heart and threw him out into the road. The following morning, when the caravan had started up, they’d driven over what was left of his bones.

Dez moved past the math teacher and knelt on the bench seat. The thick cardboard covering the glass was loose at one corner, held in place with a tiny square of weak Velcro. She peeled it back, careful to minimize the sound, and then peered out.

There were at least forty of them.

Mostly men, a few women. All  clad in the bloodstained shreds of forest camouflage battle dress uniforms. Their weapons and gear hung from belts and harnesses, or trailed behind them on straps. A few still wore helmets. They all wore the traces of the wounds that had killed them. Savage bites that had stolen their lives and futures away along with flesh and bone.

Every single one of them was a soldier.

Her heart had long since broken, but now the pieces sank to a lower place in her chest. She resealed the window, turned and sat heavily on the bench, lowering her gun. Dez rubbed her tired eyes and felt the wetness of tears. She looked at her fingertips. Then she felt the weight of other eyes and looked up to see so many pale faces staring at her. A few were empty of anything except a lingering and vacuous shock, but most of them held some sparks of hope in their fearful expressions. No one spoke but those expressions asked the questions.

Dez felt immensely weary. She’d been at the heart of this thing, there from the very first bite. She and her partner, JT Hammond, had been the officers responding to the first attack. They’d tried to contain it, but even then, even when it was small, it was already racing out of control.

When everything fell apart, Dez and a handful of adult survivors had bundled a couple of hundred kids into a convoy of school busses and lit out for Asheville, North Carolina, where there was a rumor of a safe zone. But they’d had to detour time and time again, losing days, then weeks, and finally months. Jammed roads, forest fires, destroyed bridges, washouts, floods, and massive swarms of the hungry dead had forced them to find alternate routes. And then there were the nuclear wastelands created when the military dropped bombs to try and contain the spread.
Dumb fucks
, thought Dez. All they’d accomplished was to kill the last of the living in those cities and turn them into more of the dead, except now they were radioactive zombies. It only reinforced Dez’s belief that humans were too goddam stupid to survive.

Punkzilla by Adam Rapp
The Unknowns by Gabriel Roth
In the Presence of My Enemies by Stephen A. Fender
Longarm and the Yuma Prison by Tabor Evans
Nyght's Eve by Laurie Roma
Girl Takes The Oath (An Emily Kane Adventure Book 5) by Jacques Antoine
Baiting the Maid of Honor by Tessa Bailey
The Cauldron of Fear by Joe Dever
Hunted tgl-3 by Ednah Walters
Want You Dead by Peter James