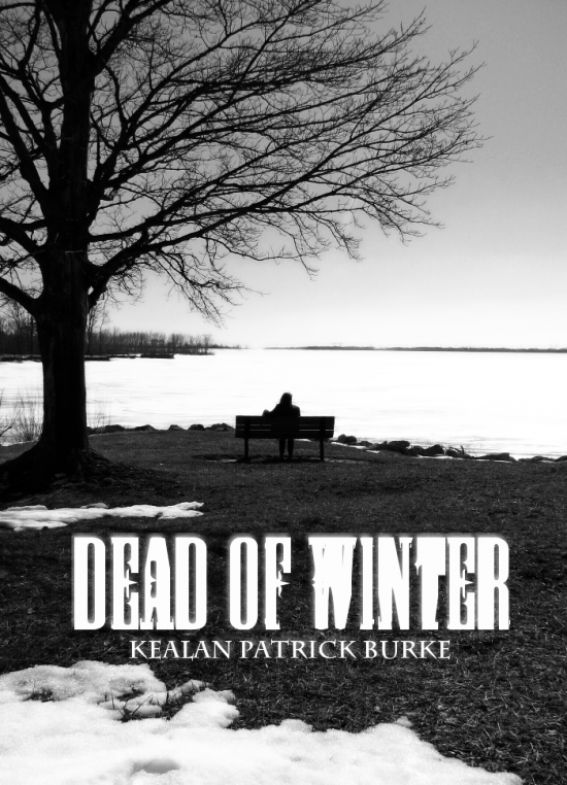 Introduction: It Comes But Once A
Year

INTRODUCTION: IT COMES BUT
ONCE A YEAR

A few years ago, while engineering our
annual Christmas get-together, a friend of mine sent me a picture
he had drawn when he was a kid. At first glance it looked just like
any other kid's drawing: crude, charming, and colorful, a depiction
of good 'ol Jolly Saint Nick, cruising across the sky in a sleigh
laden with gifts, while eager stick-figure children waited in the
streets below, arms held aloft in typical childish glee.

At least, this is what
I
thought
I was
seeing. But then I looked,
really
looked at the picture, and noticed something odd:
Santa was flying upside-down, the gifts tumbling free from his
sleigh to be smashed into dust in the (and this was something else
it took a moment for me to notice) oddly
empty
streets.

I was immediately inspired to write a
story based on that picture, and that's what I did. I dedicated the
piece to my friend, and emailed it to him. He responded with such
enthusiasm, I decided that, in lieu of a Christmas card (which I'd
been typically lazy in sending that year), I would send the story
to everyone in my email address book instead. The response was
positive, if a little dispirited, and this I fully expected.
Generally at Christmas, you send people cheerful messages. The
message I'd sent in "Doomsday Father Christmas" was anything but,
and that went on to become a trademark characteristic of my annual
"gifts". The next year I sent out "Black Static", another sad and
tragic piece. This year, those unfortunate enough to have shared
their email address with me at some point over the past ten years
got the gut-wrenching "Visitation Rights", published here for the
first time. All the stories were dark and devoid of
hope.

But then, I do write horror
stories, ladies and gentlemen. The dark stuff. And I have to admit,
it gives me a kind of perverse thrill to imagine you now, cuddled
up in the warm glow of a blazing fire, the tree lights blinking and
throwing maddened shadows up the wall. Perhaps it's snowing outside
and there's a classic Christmas movie on the TV, and there you are
all cozy on the couch, Kindle or Nook in hand, reading these words
with a sinking feeling that maybe, just maybe, herein there lies
little in the way of Christmas cheer. And you'd be right. What
follows is grim stuff, my friend. Christmas
fear
, if you prefer. And if it rattles
you a bit, gives you a chill despite the fire, then I've done what
I set out to do with these tales.

Now let's get to it, shall
we?

Before you catch a cold.

Or the cold catches
you
...

The two men standing in Ryan’s
backyard were like irises in the eyes of winter.

And they were looking right at
him.

The boy stood in his bedroom, the cold
licking his wrists and ankles. He shuddered. His bed stood only a
few tantalizing feet away. The window was even closer.

But he couldn’t move. Not
yet.

Not that that would do any good
anyway. Dad had come home drunk enough to fill the entire house
with the smell of sweat and whiskey. Mom was asleep on the couch,
exhausted after carrying his father up the stairs and roaring abuse
at him. They wouldn’t be in any mood to entertain Ryan now. Just
your imagination, they’d say.

But it wasn’t his imagination. Nor a
dream. He had blinked his eyes once, twice, three times. He’d
pinched his arm hard enough to force him into stifling a yelp –
there would be an angry red welt there tomorrow. He’d gone to the
bathroom to pee and splashed cold water on his face…and when he’d
returned they were still there. Two of them. One large, one
small.

It was snowing again now but that
didn’t seem to bother them. They simply stood, unmoving, watching
him with fierce interest. Waiting for something maybe. But
what?

Again he thought of rousing his
parents. So what if they didn’t believe him or were angry? At least
he wouldn’t be alone. At least then he could drag them in here and
let them see for themselves that he wasn’t lying, or imagining
things.

But would the men still be
there?

Courage bloomed in him like a warm
flower and he willed his legs to move.

In a heartbeat he was padding across
the cold floor. He yanked the door open and the narrow hallway
beyond yawned into view. His father was closest, so he hurried down
the hall to his parent’s bedroom and tapped once on the door – a
matter of formality – then entered the room.

And stalled on the threshold, halted
by memory. His eyes searched the dark, finally straining the shape
of a bed from the meager light spilling in from the hall. An
uncertain pale oblong held the crumpled shape of a wild-haired
shadow, open-mouthed. Gasping and gurgling. Gasping and
gurgling.

Can’t wake
him
, Ryan thought, fearful. On his cheek,
the latent print of an old wound rose like a submarine from the
deep and brought a flush to his skin. The sound it brought echoing
inside his skull was a mere whisper but the remembered threat was
enough.

Wake me again you little bastard and
I’ll break y—

No
.
Suddenly afraid his presence would be enough to rouse the sleeping
man, Ryan eased stealthily back, wincing in time with the creak and
groan of the floorboards. He paused once more on the threshold,
listening.

But it did not come. Waiting until the
awful gasping and gurgling resumed, Ryan moved out into the hall, a
heavy sigh momentarily drowning out the machinery of drunken
slumber. He slowly turned the knob as far as it would go so the
door would shut without a sound and was relieved when it did so
without betraying him.

Safe. He was annoyed at himself for
even thinking his father could help him. He knew all too well from
past experience that Dad was a mean drunk. Worse when roused from
sleeping it off. And yet Ryan had intended on doing that very
thing.

There was not a doubt in his mind that
his father loved him (even if he never said as much), and would
never intentionally lay a hand on his son. But when he was drunk,
he changed. Became possessed. He was a monster, who forgot the
people who shared his cave and lashed out at them as if they sought
to invade his territory. He hurt them, then wept in the morning
when he saw what he’d done. A broken finger, a bleeding nose…a cut
cheek. A broken heart.

Ryan’s breath whistled through his
nose as he approached his bedroom. The door was opposite the stairs
and now indecision cut through him. Wouldn’t it be wise to check
and make sure the men were still there before trying to wake his
mother?

Sure it would. But what if
they weren’t there? It might mean they’d left, their staring game
spoiled now that he’d moved away from the window, or it might mean
they’d moved, looking for a way into the house to get him. The
thought chilled him. But not nearly as much as the one that
followed it:
What if they’re
already
inside?

Ryan swallowed, braced a
hand against the wallpaper to steady himself. He listened to the
sounds of the house.
Creak, groan, sigh,
creak
, all in time with the soughing of the
wind through the eaves. But weren’t those creaks like footsteps
mounting the stairs? Wasn’t that groan like a stubborn door being
carefully shut? The sigh – the inexorable breath released at last
by someone who’d been holding it?

Someone on the stairs.

“
Hello?” Ryan’s voice was
tiny and quickly swallowed by the shadows hanging in the corners of
the hall.

The wind answered him.
“
Ryyyyaaaannnn
,” he
was sure it said.

This was not imagination either. Ryan
felt his bladder let go, soaking his pajama bottoms as tears welled
in his eyes. Not imagination at all and that was unfortunate, for
at that moment, the lights flickered, just as the maker of those
creaking sounds reached the top of the stairs and stepped onto the
landing.

And there was no one there.

Lights buzzed. Shadows leapt, but the
hallway was empty.

And from his father’s bedroom, the
suddenly reassuring sound of a hacking cough quickly became a
gurgling snore once more.

Shivering, Ryan looked down at the
puddle between his feet. He would have to clean it up before he got
in trouble, but that could wait. He was already in trouble, but
this kind of trouble was the very worst kind. The kind of trouble
where you’re not sure who’s after you or why. All you know is that
they are.

He stepped around the puddle, hand
still splayed against the wall, the floor creaking and cold, the
wallpaper he’d always hated whispering beneath his fingers, and
swung into his room. The moonlight was splashed across his bed,
smothering darkness in the folds where he had thrown back the
covers when something had woken him up and drawn him to the
window.

As it drew him to the window now, his
body tensed, eyes wide and still moist.

They won’t be
there
, he knew.
They won’t be there because they’re in the house with me,
probably creeping up the stairs right now
.
His certainty was reinforced by years spent watching horror movies
at his best friend Larry’s house on Halloween. Horror movies he
knew his parents didn’t approve of. Larry’s parents didn’t care.
Sometimes they even joined them in watching them. In horror movies,
the Thing That Was After You always stood motionless when you
caught sight of it. Then, when you brought your parents back,
babbling and screaming about the monster in your closet/on the
ceiling/under your bed/outside your window and pointed at where
you’d seen it, it would be gone. Making you a victim of something
almost as bad as the monster – enraged parents. It would wait then
until Mom and Dad were sound asleep before creeping out to kill
you.

The Aries Libra Connection (Opposites In Love Book 1) by Lane-Walters, Janet
Wild Thing by Robin Kaye
The Book of Old Houses by Sarah Graves
Seven-Day Magic by Edward Eager
A Sea of Stars by Kate Maryon
Slow Train to Guantanamo by Peter Millar
The Hidden Family by Charles Stross
The Bear Essentials (Siren Publishing: The Stormy Glenn ManLove Collection) by Stormy Glenn
Mystery Behind the Wall by Gertrude Warner
Boys Will Be Boys by Jeff Pearlman