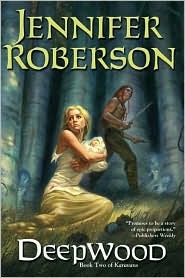 “Roberson’s complex sequel to
Karavans
… Readers will be impatient to see what happens in the next volume.”

“Lots of action, competently drawn characters, and a world in which anything can happen. High-quality action fantasy.”

“Roberson prose is compelling, the book’s premise is well-presented, and the pages almost seem to turn themselves. This installment is a shining example of Roberson’s sterling attention to detail. Fans of the first book,
Karavans
, can expect an all-nighter!”

And for her previous volume,
Karavans:

“The first volume in a new fantasy saga establishes a universe teeming with fascinating humans, demons and demigods … the pieces are in place for what promises to be a story of epic proportions.”

“Jennifer Roberson’s
Karavans
(the opening volume of her first new series in two decades!) is a storytelling tour de force with all the trappings of a classic fantasy saga: a cast of fully realized and singularly unique characters, desperate quests, ominous prophecies, and intertwining plotlines filled with dark magic and supernatural intrigue—all set in a war-torn realm drenched in blood. Fans who have enjoyed Roberson’s previous works will be absolutely blown away by this emotionally charged nomadic adventure through a world teetering on the brink of chaos. Set in one of the most vividly described and downright intriguing fantasy realms to come along in years,
Karavans
is arguably Roberson’s best work to date. Featuring breathtaking cover art by artist extraordinaire Todd Lockwood, this is a ‘must-read’ fantasy if there ever was one.”

“The many mysteries set up are tantalizing enough to make me impatient for more.”

THE GOLDEN KEY
(with Melanie Rawn and Kate Elliott)

ANTHOLOGIES
(as editor)
RETURN TO AVALON
HIGHWAYMEN: ROBBERS AND ROGUES

All characters in the book are fictitious.
Any resemblance to persons living or dead is strictly coincidental.

The scanning, uploading and distribution of this book via the Internet or via any other means without the permission of the publisher is illegal, and punishable by law. Please purchase only authorized electronic editions, and do not participate in or encourage the electronic piracy of copyrighted materials. Your support of the author’s rights is appreciated.

For Drs. Beverly Scott (Phoenix) and
Jim Maciulla (Flagstaff),
veterinarians extraordinaire,
who have always gone those many extra miles
for my beloved Cardigan Welsh Corgis.

A
UDRUN SLEPT. AND woke. Slept, and woke again throughout the night, and also the day. Mind and body refused to remain awake and aware of the world. When, for the barest flicker of a moment, she roused to consciousness, there was no strength in her limbs, no impulse to awake, to arise, to recall who she was, to remember where she was. To be cognizant of the world.

Now Audrun’s eyelids snapped open as she sucked in a strangled breath of recollection. Oh, yes, she remembered. She remembered all of it.

Vision, dazzled by a chiaroscuro of dark and light, of low-hanging, gnarled trees bearing broad, sharpedged fronds glittering like crystal, struggled to find clarity. But vision was fractured.

She squinted, lifted a trembling hand to shield her eyes. The world was bright, and warm. Blindingly
bright. Leaves rippled overhead. Fronds bent down on delicate, pendulous stems, as if to touch her. Beneath her body blades of grass stirred against her flesh, insinuating themselves within the weave of her clothing. She turned her head to escape the glare of double suns, one white, one yellow; the sky, through the trees, was a dusty sepia.

Five
children, now; the newborn infant had spilled from her body well before its time. And lived.

Sound broke from her mouth.

“Be still,” someone said sharply.

But no. Her body would not permit it. Her awareness, rousing now from exhaustion into tensile wakefulness, asserted memories. Audrun recalled the wind, the rain, the storm, the blackness rolling across the land, the absence of her family.

Alisanos. The deepwood. The nightmare.

And again the voice. “Be still.”

She could not do that. Could not
be
that.

Alarm sent the blood rushing through her veins, filling her with memories, with awareness, with the terrible pain of loss. Her throat closed on a gasp, on a sob; on a strangled outcry of grief.

Be still, he had said.

But first she hitched herself up on one bruised elbow. To look. To see. To register what she saw. Yet to understand none of it.

The karavan guide … who was not Shoia after all,
but something else entirely.
Dioscuri
, he named himself: the son of a god. An Alisani god.

His back was to her, bare save for the leather baldric hooked slantwise from left shoulder to right hip. And braids, so many copper-hued braids, twisted, tangled, and threaded one upon another into a complex cluster of ornamented plaits dangling down his spine. His posture was tangibly erect, with legs spread slightly, knees flexed, booted feet planted.

She could not see his face, but she could hear what he said. And understood none of it.

Rhuan stood his ground. Around him, with a stirring of vegetation, a trembling of leaves, came the sound of growling, of howling, of hissing, of noises she could not identify save for the tone, the threat. A suggestion of sinuous bodies. Of
beings
.

Human, none of them. This was Alisanos.

In a tone she had never heard, in a tongue not her own, he spoke to the bodies and beings. He was of Alisanos. He had said so. Confessed it, when she insisted on an answer. This was his world. These beings, these bodies, he knew.

He turned very slightly, still holding his place. She saw then that cradled within a leather sling constructed from his tunic was the infant, clasped within his arms against his chest. The girl. Born four months before her time, yet inexplicably full-term.