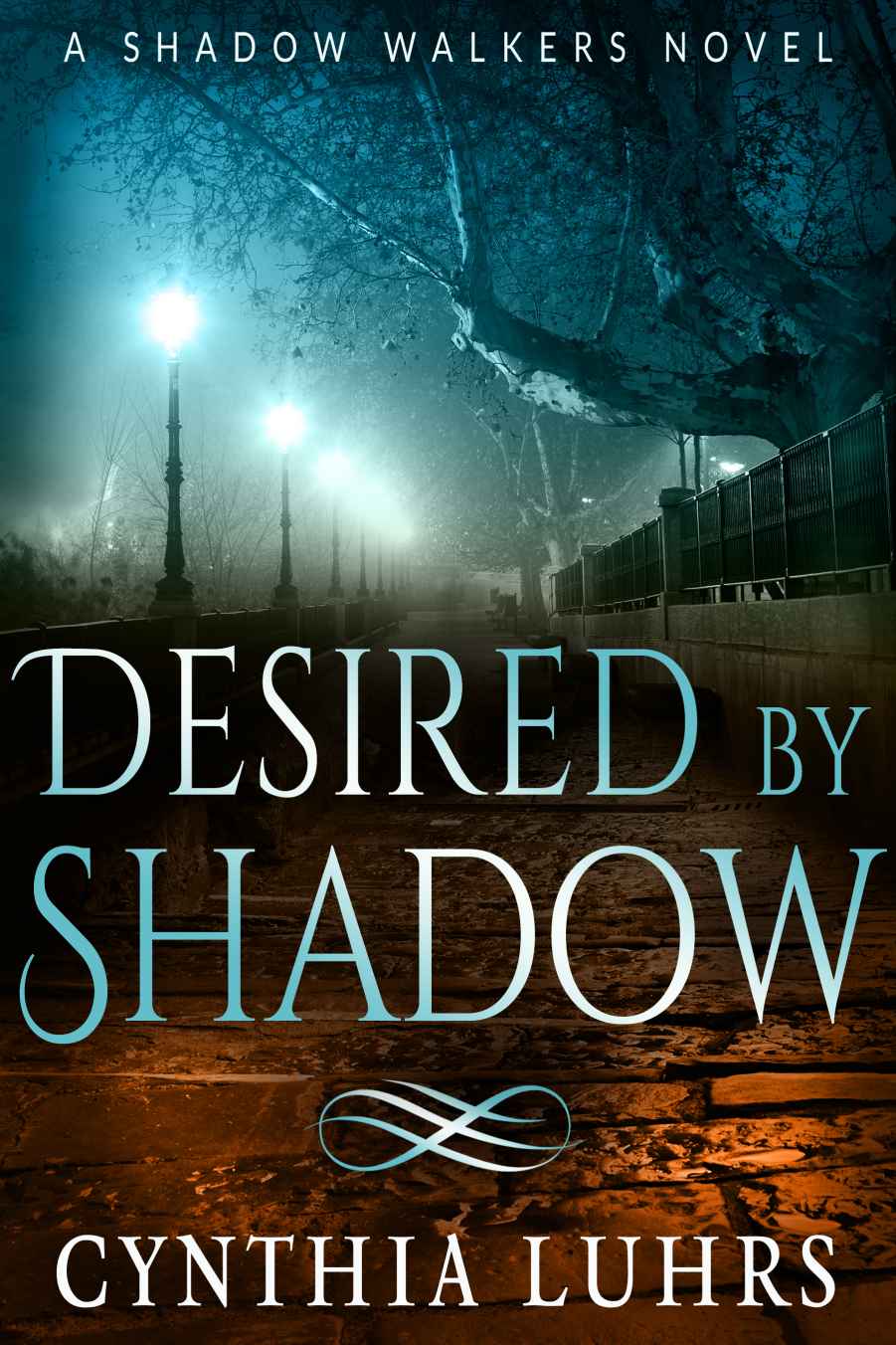 This book is a work of fiction. Names, characters, places, and incidents either are products of the author’s imagination or are used fictitiously.

A modern-day ghost story with a twist. Come play in the shadows and meet Robert and Maggie.

Kidnapped on her way home from work, Maggie is thrown into a terrifying world of shadow. Narrowly escaping death, she flees her kidnappers only to come face to face with the enemy.

Coming across a dying stranger, Maggie unleashes a terrible curse when she saves Robert. Now with only a week to break the curse, time is running out as they are locked in a deadly fight with forces that will stop at nothing to destroy them before they succeed. Intensely romantic and thrilling, Desired by Shadow portrays the struggle between redemption, retribution and the desire to find a love that transcends time.

For Vakesia, for your unwavering belief in me.

For Mom, for your support and encouragement.

Thanks to my fabulous editor, Eric Orloff at Editing for Authors. Gorgeous cover designed by Derek Murphy of Creativindie Covers, and to Polgarus Studio for formatting. You guys are amazing!

To all my friends who have listened, offered advice and been my biggest cheerleaders, this one’s for you.

Note to the Reader

I’ve taken liberty with Edinburgh, slightly changing places and geography to fit my story. Not to mention I split England and Scotland by water. The secret tunnels under Edinburgh and surrounding area are my creation…although ‘tis rumored they exist. The area around the Leith docks is mainly an industrial area. I’ve made it into more of an entertainment district with the flavor of a seedy dockside environment. Castle Gloom is actually Castle Campbell. All mistakes are my own.

Thank you to my wonderful fans for loving the Shadow Walker world as much as I do. You guys rock!

He’d outrun every ship, evaded every customs officer, and made a name for himself only to have his entire life’s work destroyed by
her
.

As an example to the people against the vagaries of pirating, Robert and his crew were scheduled to hang in an hour. The watered-down sun rose from its sleep as throngs of common folk gathered, staking out the best seats in the house. People loved a good hanging. Sounds of bagpipes and fiddles reached his ears. If the weather held it would be a festive event with beer, whisky, and meat pies sold by roving street vendors. Children would sit on their parents’ shoulders or find a spot with a good vantage point. Everyone attended.

“Robert Bartholomew of Wales or shall I call you Black Bart or was it the Prince of Pirates? You go by so many names it’s difficult to know which one to use. The infamous pirate and his crew here in my dungeon at Edinburgh Castle. Not much of a bloody legend now, are ye?” Captain Rawlins Huntington of Her Majesty’s army stood before him dressed resplendently in his redcoat and shiny black boots.

“Don’t care what you call me.” Robert yawned. “Sounds like a large crowd out there. There’s bound to be plenty of mayhem and confusion, what say I give you half my fortune to slip me the keys and look the other way while my men and I abscond from this dreary place? You’d be rich beyond your wildest dreams, Captain.”

“Yer friend Lord Colin made me a similar offer and we both know how that turned out.” The Captain brushed dirt off his scarlet sleeve before looking at Robert. “I don’t want your gold. Hanging you and your miserable crew is worth more to me than gold. I’ll be remembered as the man who brought down Black Bart. Anyway a breakfast banquet has been prepared and I do so hate to waste a good meal.”

Robert sighed. He could almost appreciate the Captain’s flair for the theatrical if only it wasn’t his and his crew’s necks in the noose. Seeing his crew shackled brought a lump to his throat and hatred rose like a sea monster from the depths of the darkest oceans. The crowds brought nasty bits of rotten food to throw as the prisoners shuffled towards the platform. On the bright side, ‘twas the largest turnout he’d ever seen, even with the cold air whistling and moaning through the square. Robert quietly addressed his makeshift family. The noise of the crowd would preclude the good English Captain from overhearing. “‘Tis been my pleasure serving as your Captain these many years. I make a vow and swear before you—I will find a way to provide for your families. We will have our revenge.”

The crew answered back with shouts of “Aye, Cap’n” and “Death to the English buggers.” Walking up the platform steps behind them, Robert searched the crowd for a friendly face, for some indicator they might still be saved. “Stay strong lads.”

There were six ropes swaying in the wind but there were twenty-five men including himself. The bastards made it so his crew would have to watch their mates die. Blackness filled him. He looked for a way to escape and destroy those who would harm what was his.

Robert flinched with the loss of each man. Twenty-four good men dead.

Rawlins purposely left him for last. The noose was tightened, the pronouncement read as Robert braced his legs and the drumroll started. Rawlins leaned in close, breath warm against Robert’s ear. “Rot in hell, Prince of Pirates.”

The force of his anger swelled, filling the air. “Fuck you. I swear I will find a way to haunt you to the end of your miserable days and beyond.” Robert ground out in low, measured tones. “Let it be quick.” The platform shook. The bang registering as the trap door opened and the rope jerked, pulling tight, cutting off his air supply as he fell through the opening.

Vaguely as if in a dream, he noted his legs twitching and a roaring filled his ears. Like the sound of his beloved mistress, the sea, it crashed through him, pulling him under. His final dying words bubbled up from the depths. “Vengeance shall be mine.”

The waves parted, shrinking back from the shadows swimming in to envelop him, pulling him under. Robert’s soul screamed in frustration and sadness seeing his body swinging from the hangman’s noose. Waves crashed over him and still the shadows held tight. Yet in the watery depths, Robert saw flashes of light, like a lighthouse beckoning in a fierce storm.

Reaching out, he heard a deep voice coming from within the light—offering him another way.

Her old life on the street seemed to belong to someone else. Maggie Wallace finished wiping down the tables at the Merry Maid Tavern thinking about how much her life had changed over the past year. Orphaned at age seven and not having any other family, she was sent to a sad, depressing home for children. At fifteen she’d run away, preferring to take her chances on the street. She’d survived for nine years, finding odd jobs, crashing at friends’ places for a week at a time, paying to stay at hostels when she could scrape the cash together, sleeping in abandoned buildings when she couldn’t. Other than infrequent odd jobs, this was the first real job she’d held. The tavern owner had seen her on the streets and one cold night last year offered her a job when she refused his charity offer of twenty quid. Other street kids called her stupid for not taking money from strangers, but she had to earn her own way, no matter what. Waitressing paid decently. She had a roommate, Josh, and they’d found a tiny, reasonable flat close to work. Was it only four months ago they’d moved in? Seemed like a lifetime. Her own place, a good friend, a steady job—what more could she ask for?

Why did you always think about your life when the end of the year drew to a close? Shaking her head, Maggie bid the barkeep goodnight and headed out into the clear, cold night. Stepping off the curb, Maggie jumped back falling on her ass as a white van screeched around the corner, an odd thumping sound emanating from inside.

Getting up, she dusted her coat off, checking for damage. Maggie purchased the coat when she’d received her very first paycheck. It had been an extravagance, but she loved the soft wool and beautiful deep-blue color. Tugging her hat down, she set out for the twenty-minute walk home.