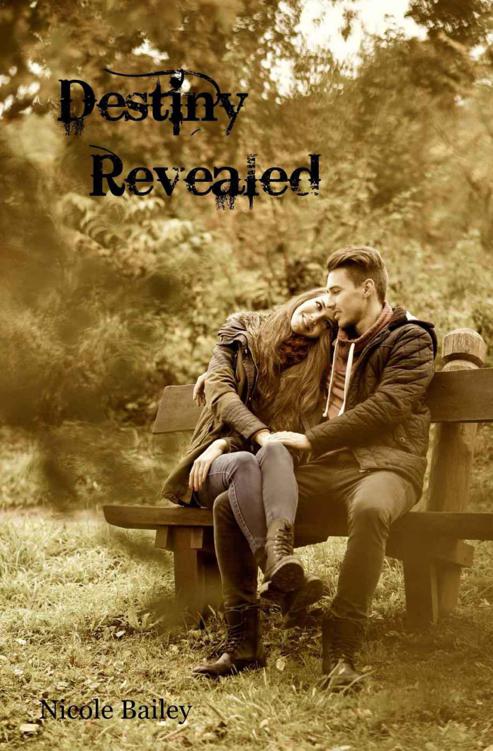 Destiny Revealed
For my Papa Punkin, who stays up all night
reading my books.
Chapter One

Being newly bound to Nick was more than I hoped it
would be. It still felt weird to be eighteen, a senior in high
school, and have a husband and my own apartment. But it
was a relief to know that we could live out in the open now.
No more sneaking around or running away.

Ky and Marco had been shunned by all of us, and they
continued to sit alone at lunch every day. Fortunately,
neither Nick nor I had any classes with Ky. I honestly think
I would have switched classes if I did—even though there
was only a month and a half of school left.

After art the next afternoon, Nick ditched his last class
and came with me to Mamma’s store. I wanted to talk to
her about Nonna’s book. “Ciao, Mamma,” I said as we
walked in through the back door. She was alone,
reorganizing the candle shelf.

“Ciao, Piccola, comme va?” she stood up to greet us.

“Sofia!” Nick’s mom, Daniela yelled across the
restaurant as soon as we walked in.
“Mamma, don’t embarrass her. You’re being loud,”
Nick told her.
“Oh, nonsense,” she said, walking over and hugging
me. It was amazing how quickly she and Aberto had given
up on the whole Beth thing—she was Nick’s werewolf ex.
Once they found out Nick and I bound ourselves to each
other and the feud ended, they adopted me into the family
with open arms. It still blew my mind.
Babbo and Mamma had gathered her circle and
Aberto’s pack the morning after our ceremony. They took
the book with them, explained the story of Henri and
Adelina, and insisted the feud end. Some of the older
leaders struggled for a while. Within the week, Aberto and
Daniela wanted to meet me.
They had accepted the binding—well they had to—but
as soon as they saw us together, they fully supported us.
His mom practically said the same thing as Mamma,
insisting she saw the connection between us right away.
“You cannot deny this,” she had said to Aberto. And she
was the one I worried about the most because she had been
so dead set on Nick being with Beth because she was a
were.
“Sit, let me get you something,” she said now. “What
sounds good tonight?”
“Mmm… how about your lasagna,” I answered.
“Roberto!” she screamed across the restaurant for
Nick’s little brother. “Bring Nico and Sofia some bread.”
“Mamma, seriously. Inside voice,” Nick chastised.
“I am Italian. I have no inside voice,” she laughed as
she walked away to the kitchen. “Aberto, the children are
here,” we heard her yell again.
“Good grief, that woman is louder than my mom even,”
I laughed.
“Try growing up with her. Every conversation sounded
like she was mad at me,” Nick rolled his eyes.
Robby came out with the bread and practically dropped
it on the table. “What’s up with you?” Nick asked.
“Sorry. Mamma won’t stop yelling at me. ‘Roberto, set
table forty-four.’ ‘Roberto, you didn’t fold the napkins
right.’ ‘Roberto, they need more water’. You get the idea,”
he frowned.
“Sit down and eat with us,” I offered.
“Are you kidding? I’m banished to the kitchen when
I’m finally allowed to eat. And even then, I get like two
bites before she’s bossing me around again.”
“Who is bossing around?” Daniela asked as she walked
up to our table with dinner.
“Daniela, do you think it would be okay for Robby to
have dinner with us tonight? I haven’t really had time to
ask him about school,” I asked as sweetly as possible.
“Sὶ, that is okay. But don’t be too long,” she said,
pointing her finger at him. I laughed when she walked
away.
“So, how is school anyway?” I asked as I started to eat
my lasagna.
“I can’t wait to be a freshman,” he instantly got excited.
“Good thing we’re graduating. I won’t have to see you
at school next year,” Nick teased. He and Robby actually
had a strong relationship.
“That’s not very nice,” I said. “He is your little brother
after all.”
“Yeah, but he’s like Dash Jr. I don’t know if Mason
High can handle another one.”
“No. Sweet Robby? No way,” I smiled, rubbing his
head and messing up his hair. I knew he was a
troublemaker at the middle school, but I doubted anyone
could be as bad as Dash.
Robby chattered on about school and some cute were
girl his age while we ate. He seemed excited to be able to
sit down and talk to people. He complained that he could
never go anywhere because he was always at the restaurant.
“Let me get my violin,” Nick scoffed. “I had to do it
before you were old enough.” Robby mumbled something
about how much it sucked anyway. Just like he said,
Daniela didn’t let him sit for long. She was back to shuffle
him off to the kitchen after only a few minutes.
Nick and I didn’t stay too long. I looked through the
book a little more before bed that night, but it was so huge
that it took forever to get very far. “I’ve still only gotten
through about thirty years,” I complained as Nick turned
the light off.
“We’re not in any hurry, Bella. Just take your time and
enjoy the book. He rolled over to face me in bed and kissed
me softly on the mouth. “Ti voglio bene,” he whispered.
“I love you back. Forever, Nick. Nothing could ever
separate us,” I smiled. “Now, I have to close my eyes.
They’re still burning from reading.”