Dewey sprang to attention and crept
re-e-e-e-eally
slowly toward the sound. The little people, Dewey discovered,
came in tiny sizes too!

And they loved to giggle.

Babies are wonderful,
Dewey thought.
Cute and SMELL-icious, too. A few days later, Dewey went exploring and discovered, in a secret room,
the most exciting thing he had ever seen. Children’s Story Hour!

Wowzy whiskers, this looks fun,
Dewey thought,
as he pushed into the room with his nose.

“There’s a cat in the library!”

It was quiet for one minute. Then everything went wild! 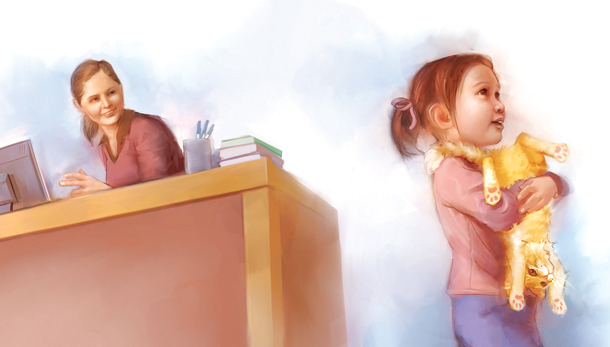 And the next thing Dewey knew, he was being carried upside-down.

Oh my,
Dewey thought,
what should I do now? The library is a wonderful place,
Dewey said,
but I’m tired of being
pulled and poked and carried upside-down. I’m not just a cat in a
library, I’m a
Library Cat.
A library cat helps people, I think, and
I’m ninety-two percent convinced that that’s the reason I’m around.

I’m gonna do it,
Dewey said.
I’m going to help people.
And he felt so
happy that he threw Marty Mouse into the air, kicked him with his
back legs, then slept on him like a pillow. The next morning, when the first people arrived, Dewey was waiting to greet them right by the front door. When he saw little Nathan, he turned a circle and a half so the
boy could pet his back from his head down to his tail—the
right
direction to pet a cat.

Dewey smiled at that. 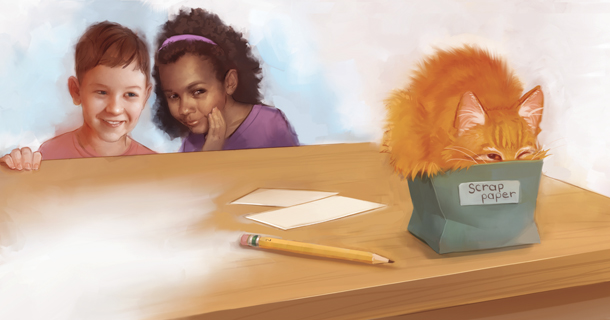 By lunchtime Dewey was worn out.

So he found a good box.

First he put his front paws inside, then his belly.

He squished his back end down,

wiggled arounduntil he was all the way in…

and closed his eyes.

“There’s an orange muffin in the library,” a girl giggled.

But just as Dewey was about to drift off into sweet kitten dreams,
he heard a heavy sigh. His eyes popped open, and he saw a girl on
the other side of the library. 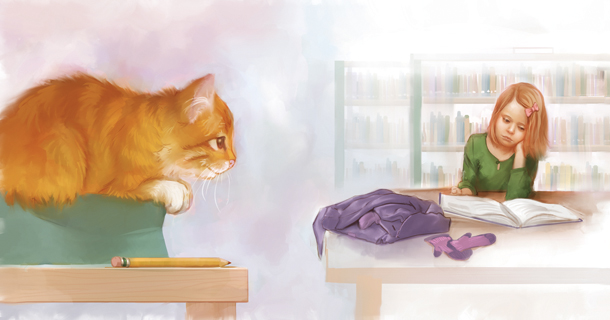