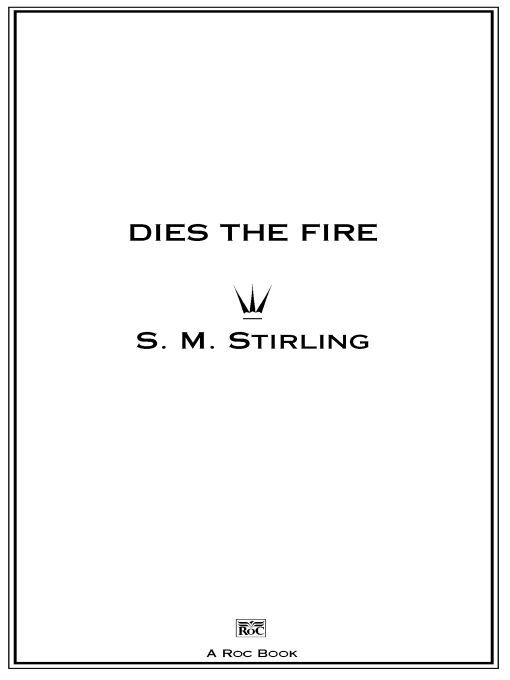 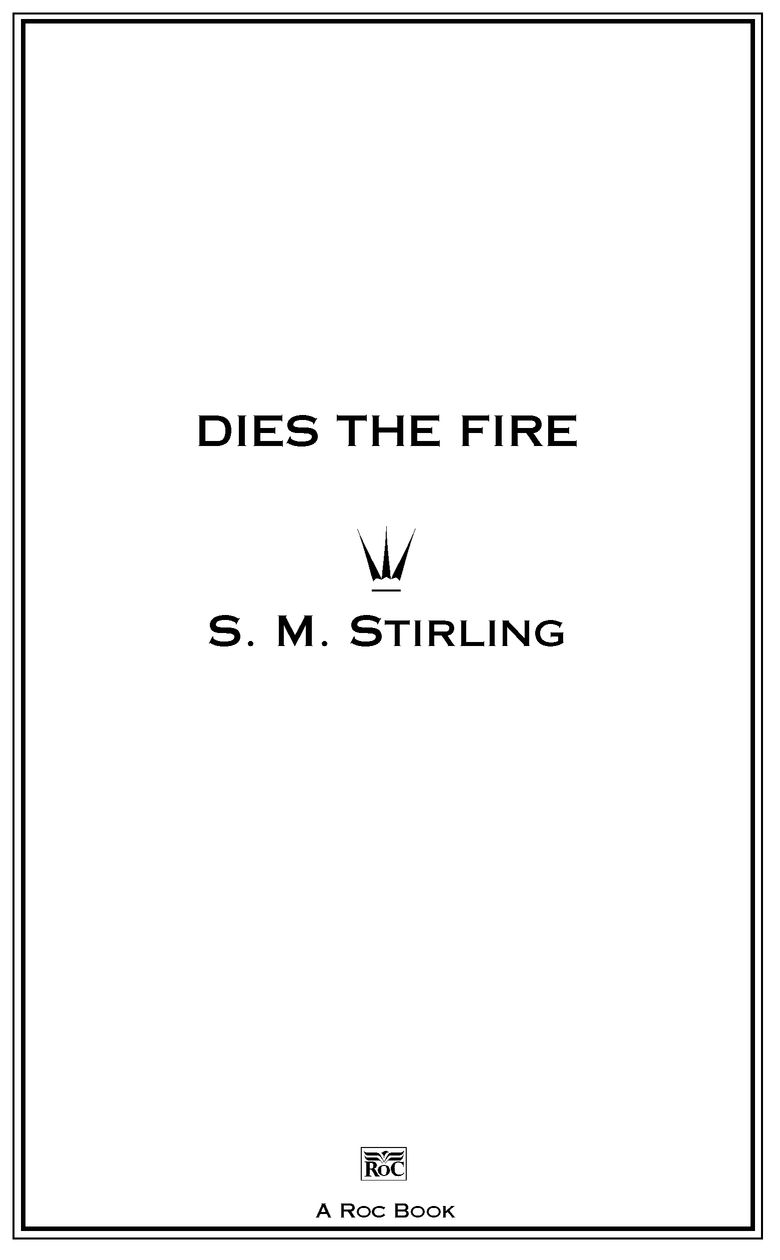 REGISTERED TRADEMARKâMARCA REGISTRADA
LIBRARY OF CONGRESS CATALOGING-IN-PUBLICATION DATA
Stirling, S. M.
Dies the fire / S. M. Stirling.
p. cm.
“A ROC book.”
eISBN : 978-1-101-04391-2
1. Regression (Civilization)âFiction. 2. Electronic power failuresâFiction.
3. Community lifeâFiction. 4. Farm lifeâFiction. 5. OregonâFiction.
6. IdahoâFiction. I. Title.
PS3569.T543D54 2004
813'.54âdc22 2004004363
Â
Without limiting the rights under copyright reserved above, no part of this publication may be reproduced, stored in or introduced into a retrieval system, or transmitted, in any form or by any means (electronic, mechanical, photocopying, recording or otherwise), without the prior written permission of both the copyright owner and the above publisher of this book.
Â
PUBLISHER'S NOTE
This is a work of fiction. Names, characters, places, and incidents either are the product of the author's imagination or are used fictitiously, and any resemblance to actual persons, living or dead, business establishments, events, or locales is entirely coincidental.
Â
BOOKS ARE AVAILABLE AT QUANTITY DISCOUNTS WHEN USED TO PROMOTE PRODUCTS OR SERVICES. FOR INFORMATION PLEASE WRITE TO PREMIUM MARKETING DIVISION, PENGUIN GROUP (USA) INC., 375 HUDSON STREET, NEW YORK, NEW YORK 10014.
Â
The scanning, uploading and distribution of this book via the Internet or via any other means without the permission of the publisher is illegal and punishable by law. Please purchase only authorized electronic editions, and do not participate in or encourage electronic piracy of copyrighted materials. Your support of the author's rights is appreciated.

To Gina Taconi-Moore, and to her Andrew, currently serving the great Republic in a far-off, sandy, unpleasant place. Long life and happiness!
ACKNOWLEDGMENTS
Thanks to Nick Pollotta, for a neat idea; to Dana Porter of Outdoorsman, Santa Fe, for advice on cutlery and survival; to Stephen Stuebner (author of
Cool North Wind
and many wonderful books on Idaho) for his works and advice; to the folks at Saluki Bows; to Kassai Lajos, whose
Horseback Archery
is a fascinating chronicle of his reconstructions of ancient and medieval horse archery, which were invaluable; to Melinda Snodgrass, Walter Jon Williams, Emily Mah, Yvonne Coates, Daniel Abrams, Terry England, Janet Stirling and George RR Martin of Critical Mass for their analysis and criticism; to Charles de Lint for advice on music and some cracklin' good tunes; to Parris McBride for help with the Wiccan religion and the loan of helpful material; to Kiers Salmon for help with Wicca and also for going all around Oregon doing research for me; to Robin Wood, for still more help with Wicca; and to Alison Brooks for inventing the phrase “Alien Space Bats,” which I stole.
Â
Special thanks to Heather Alexander, bard and balladeer, for permission to use the lyrics from her beautiful songs “The Star of May Morning,” “John Barleycorn,” “The Witch of the Westmoreland,” “Dance in the Circle,” and “Ladyes Bring Your Flowers Fair,” which can beâand should be!âordered at
www.heatherlands.com
. Run, do not walk, to do so.
Far-called our navies melt away On dune and headland sinks the fire; Lo, all our pomp of yesterday Is one with Nineveh and Tyre!
Â
Â
âRudyard Kipling, “Recessional”
CHAPTER ONE

Boise Municipal Airport, Idaho
Tuesday, March 17th, 1998
6:15 P.M., RMTâChange minus one hour
Â
Â
M
ichael Havel pulled his battered four-by-four into the employees' parking lot, locked up and swung his just-in-case gear out of the back, the strap of the pack over one shoulder and the gun case on the other. It was a raw early-spring Idaho afternoon, with the temperature in the low fifties; the light had a cool, bleakly clear quality, as if you could cut yourself on the blue of the sky.
He walked quickly across to the door marked “Steelhead Air Taxi” and opened it with three fingers and an elbow, whistling a Kevin Welch tune under his breath. Inside he set the gear down on a couple of chairsâthe all-up weight was nearly eighty poundsâand opened his heavy sheepskin jacket, stuffing his knit cap into one pocket.
That left his black hair ruffled the way it always did, and he smoothed it down with the palms of both hands. The air here smelled a bit of burned fuel and oil, which couldn't be helped around an airport.
“You said the bossman had something for me, Mellie?” he asked the secretary as he went to the pot on the table in the corner and poured himself a cup.
The coffee was Steelhead Air Taxi standard: oily, bitter and burnt, with iridescent patches of God-knew-what floating on the surface. He poured half-and-half in with a lavish hand until it looked pale brown. This was an informal outfit, family-run: Dan and Gerta Fogarty had flown themselves until a few years ago; there was Mellie Jones, who was Gerta's aunt; and six pilots, one Mike Havel being the youngest at twenty-eight, and the most recent hire.
“Yup,” the white-haired woman behind the desk said. “Wants you to hop some passengers to a ranch field in the Bitterroot Valley, north of Victor. The Larssons, they're visiting their holiday place.”
Havel's eyebrows went up; it was a damned odd time of year to be taking a vacation
there
. Tail end of the season for winter sports, but still plenty cold, and the weather would be lousy. Then he shrugged; if the client wanted to go, it was the firm's job to take him. Steelhead Air did a little of everything: flying tourists, fishermen and whitewater rafters into wilderness areas in summer, taking supplies to isolated ranchers in the winter with skis on the planes instead of wheels, whatever came to hand. There was a
lot
of unroaded territory around this neck of the woods. He glanced at the wall clock. It wasn't long to sunset; call it six forty-five, this time of year. Two hundred forty ground miles to the Montana border, a little more to wherever the Larssons had their country place, call it two, three hours . . .
“They've got landing lights?” he said.
Mellie snorted. “Would Dan be sending you if they didn't?”
He looked over her shoulder at the screen as he sipped the foul sour coffee, reading off the names: Kenneth Larsson, his wife Mary, son and daughter Eric and Signe, both eighteen, and another named Astrid four years younger.
“Larsson . . . Larsson . . . from Portland, businessman?” he said. “Heard the bossman mention the name once, I think.”
Mellie made an affirmative sound as she worked on her PC.
“Old money, timber and wheatâthen Ken Larsson tripled it in high tech. Used to hire us regular, back before 'ninety-six, but not lately. Hasn't brought the family before.”
Havel nodded again; he'd only been flying for Steelhead since the spring of '97. It was nice to know that Dan trusted him; but then, he was damned good if he said so himself, which he didn't. Not aloud, anyway.
He went through into the office. Dan Fogarty was sitting and chatting with the clients while Gerta worked behind piles of paper on the desk. There were wilderness posters and models of old bush planes and books on Idaho and the Northwest on shelves. And a faint meowing . . .
That
was unusual.
The Larssons' youngest had a cat carrier on her lap; the beast's bulging yellow eyes shone through the bars, radiating despair and outrage. It wasn't taking the trip well; cats seldom did, being little furry Republicans with an in-built aversion to change. Judging from an ammonia waft, it wasâliterallyâpissed off.

In the Devil's Garden: A Sinful History of Forbidden Food by Stewart Lee Allen
Kismet by AE Woodward
Strip the Willow by John Aberdein
Triple Jeopardy by Stout, Rex
Gai-Jin by James Clavell
Ten Thousand Islands by Randy Wayne White
The Question of the Felonious Friend by E. J. Copperman
The Land Of Shadows by Michelle Horst
Thick as Thieves by Catherine Gayle
Flight of the Raven by Rebecca York